Serial frivolous court filer and film-maker William Shanley's text of his Trillion (yes--TRILLION) dollar law suit against--well a lot of people regarding Sandy Hook. I found a better PDF or DOC version online before, but I am not at home and internet is a bit restricted here. From what I saw on the original court documents, his evidentiary exhibits were screenshots from government websites in regards to preparations for crisis drills and such.

I have seen this particular case mentioned on several Sandy Hook conspiracy sites--if this is what they hung their hats on.....

NATURE OF THE CASE
BRIEFLY state the background of your case.

Defendants entered in a multi-year conspiracy, separately and together,
to commit fraud and terrorism, i.e. to brainwash the public into thinking
a lone gunman drill known as the Sandy Hook Massacre was real, when
in fact, it was a staged FEMA National Level Exercise Event that
redirected government resources to terrorize the public. These crimes
were undertaken with the intent of subverting the US Constitution and
to affect national, state and local laws. This involved lying to the public,
faking news, publishing one-sided news reports, censoring reality,
suppressing facts, and deliberately skewing the news to shift public
perceptions. The true costs of this breach of integrity and trust to
society are unfathomable. Instead of fulfilling their Constitutional Role
as the People's Surrogates and honest brokers of information, the
Plaintiff will show how the men and women who dominate the TV news
industry in the United States, besmirched the First Amendment, their
Constitutional role as government watchdogs, and forfeited the right to
report the news and profit from news production and distribution. The
sine qua non of journalism is the search for truth. Punitive damages of
one year's annual revenue from each Defendant are being sought to
establish a News Trust, that will free journalism and restore trust in our
communications sources. A democracy cannot survive this tyranny over
human consciousness.

This is a ripe, justiciable controversy.
Click to expand...

I'm not sure that's still a thing. He named Wolfgang Halbig and Wolfgang flipped out because they used his name without permission, according to Halbig.

Then Shanley got arrested.. i think it was New london CT? and as far as i know he's still in jail.. but i dont really want to spend time looking it up because i'm not sure what the OP is claiming.

After a few weeks of wondering what happened to controversial film maker/author William Shanley, we have learned that he was arrested 12/31/14 for two misdemeanors and one felony.

According to the pending case detail (linked above) William Shanley is still incarcerated as of 1/16/2015.


hhmm.. i'm having deja vu, has this post been posted before??

I searched "Shanley" on here--the only hit that came up was in regards to Satanic conspiracies.

seams like to some truthers this whole law suit is a conspiracy in its own right,
http://gumshoenews.com/2014/12/30/s...criminalized-like-holocaust-denial/#more-2607


I venture to guess that Shanley’s case is deliberately sloppy, because it wants to fail. A judge will dismiss it for its technical inadequacy. Then a new pack of Youtubers will stir up the complaint that the judge did wrong. Meanwhile, the families will quite reasonably be seen to have been hurt by such offensive publicity, and we investigators will feel embarrassed.

Now for the denouement. You know how legislators have been on a mad kick lately to curtail civil rights? They want to take away gun rights and free speech, and they want to criminalize acts by journalists that have the effect of exposing crime in government. Can’t you just see them proposing to outlaw Youtube criticism of “terrorist” acts, because of Sandy Hook?

Hence I hereby move from my November 30th position, which was that the Sandy Hook and Marathon stuff on Youtube is mainly intended to discourage citizen investigators. I now say its purpose is to pave the way for legislation that will forbid the discussion on Internet of any crimes that we are supposed to dutifully believe in, be it 9-11, Marathon, or terrorist acts yet to come.

Whitebeard said:
seams like to some truthers this whole law suit is a conspiracy in its own right,
Click to expand...

The "Truthers" think Wolfgang Halbig is a conspiracy too. And Wolf gang was named in this lawsuit as a witness, so...


Dr. James Fetzer, whose 35 articles on Sandy Hook forVeteran’s Today qualify him for the highest investigative journalism awards, and School Safety Consultant, Wolfgang Halbig, whose investigative expertise as a former Florida State Police officer, and loving attention as a former principal, makes this case’s particulars comprehensible to all, will be called as expert witnesses.

They claim "conspiracy" everytime a hoaxer comes up with something ridiculous that embarrasses them. You can't really blame them


This is a video series I did exposing a fraudster named Wolfgang Halbig that tried to con the truth movement out of a lot of money. Opinion was at one time divided on this man, but I believe the research I present in these videos proves beyond any doubt that Halbig and his crew of handlers are liars. http://www.brendanhunt.com/-xrutv/s...-liar-video-presentation-transcript-downloads

Inquiring Sandy Hook truth researchers (who have gained my respect for over a year) are beginning to ask questions about Halbig. I think they have reason to be suspicious and skeptical. I hope Halbig is the real deal, but honestly, the red flags are real and should be explored. Given the extent to which we know the truth movement has been infiltrated and subverted for years, it’s only reasonable that this man be carefully scrutinized. http://memoryholeblog.com/2014/02/19/wolfgang-halbigs-quest-for-truth/comment-page-1/#comments 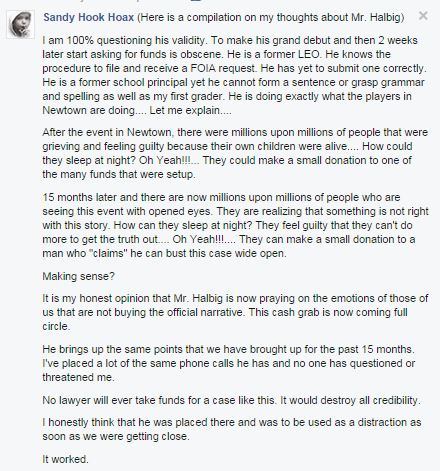 Qualiall said:
"...the Plaintiff will show how the men and women who dominate the TV news industry in the United States, besmirched the First Amendment, their Constitutional role as government watchdogs..."
Click to expand...

"Why, ah do declare!
There was public besmirching!" 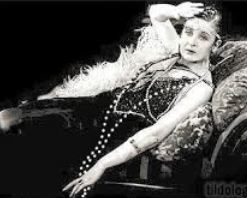 [still checking my pocket Constitution for the part about
Bill O'Reilly's "Constitutional role as government watchdog."
fwiw: Bill assures me he was at the signing of the
Declaration of Independence, and "many died" in the hellhole
of a "war zone" (aka the Pennsylvania State House) ]
Last edited: Mar 3, 2015

He did file it in forma pauperis, and considering the relatively low regular court fees, any small amount of Sandy Truthers could have raised it easily. That tells me he probably didn't have backing from them.

I stumbled upon this while looking for Nathan Folk's lawsuit that he promised would be filed last month IRT the Boston bombing---still unable to track it down--their names pair up in this article, but I'm not sure they know each other or not
http://www.veteranstoday.com/2015/01/14/media-complicit-and-indispensable-to-false-flag-success/

I don't know how people take people like Fetzer seriously. Fetzer has done nothing more than assert. He has done no real interviews with any of the victims, EMS, doctors or eyewitnesses of either the Sandy Hook shooting or the Boston Bombing. Of course, this might just speak to his lack of honesty...for those people would expose him for the fraud he is.

I... the families will quite reasonably be seen to have been hurt by such offensive publicity, and we investigators will feel embarrassed...

They've never felt embarrassed by the weak arguments before, or ashamed of any offense given to the families so far, so I don't see why this would change things.

Funny that they attack Halbig for being a LEO, yet Ted Gunderson and Sheriff Joe are a-okay

Qualiall said:
Funny that they attack Halbig for being a LEO, yet Ted Gunderson and Sheriff Joe are a-okay
Click to expand...

well, first he was only a LEO for 16 months TOPs (and seriously much respect to Mr. Halbig for finally changing his resume to reflect this), but i think the point was that as a LEO he should have known how to file an FOIA request.

At that time Halbig was claiming 3 years as a LEO but still that logic is irrelevant. What does being a LEO have to do with filing FOIA requests really?

But he did insist he never agreed to be a witness for Shanley's suit, so my example is probably leading us off topic.


But at luck would have it, The Hole did an update 2 days ago:

Subsequent information ferreted out byMHBreaders indicated that Shanley was arrested and jailed for assaulting a police officer, resisting arrest, and one additional charge. On February 11 he was released from confinement and is presently filing new motions in an effort to move his cases forward.

So i guess the Trillion dollar suit is back on!

deirdre said:
So i guess the Trillion dollar suit is back on!
Click to expand...

IF it ever gets to court, (and thats the biggest if I can find at the mo) I hope he has got some damn fines lawyers on board, cos with the likes of Murdock etc being indited he's gonna need them.
Last edited: Mar 4, 2015
You must log in or register to reply here.