Why Don't Cloud Formations Change Much in DSCOVR animations?

Occasionally it will see the moon pass in front of the earth.
Source: https://youtu.be/URFrfNTkFSM
Click to expand...

Can someone please explain the apparent lack of obvious visible cloud formation movement in the DSCOVR Sat video where the moon passes in front of the Earth? I think I understand why it may be difficult because of the distances we're talking about, but I'm lost as to how I should answer to this objection made by a flat Earth believer. My understanding is that the video consists of around 15 images taken over a period of 4-5 hours. I can understand why someone might expect to see more cloud movement. 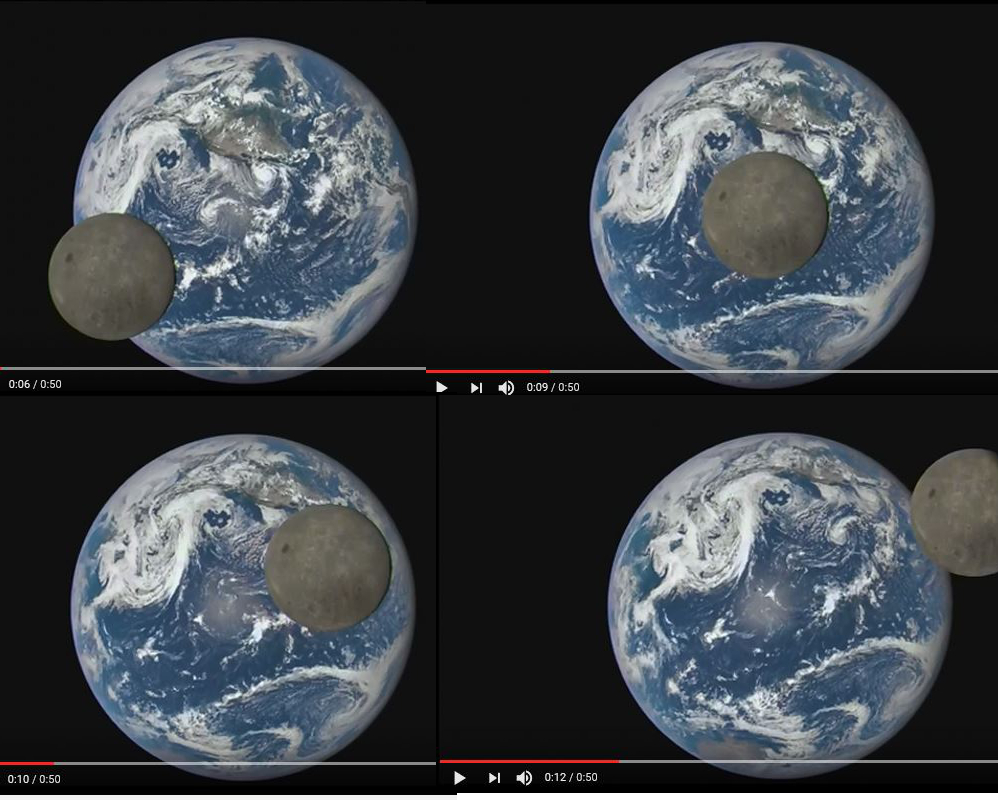 Content from external source
For a start the angle changes a lot, so you have to be careful in making comparisons. 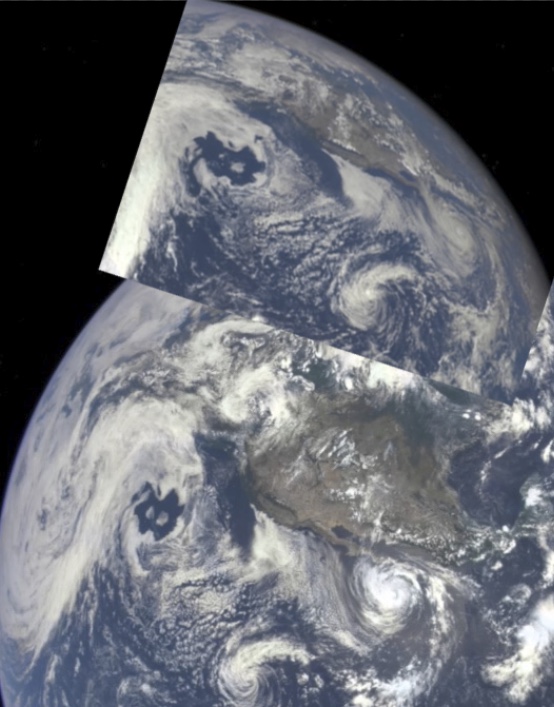 Things HAVE changed in the top (later) image there's more cloud over the Sierra mountains. The storm on the right now has a tail that goes over Baja Californian, the "mask" on the left has changed shape (one of the "eyes" has nearly gone). And if you compare the fine detail in the lower middle clouds then you can see many changes. 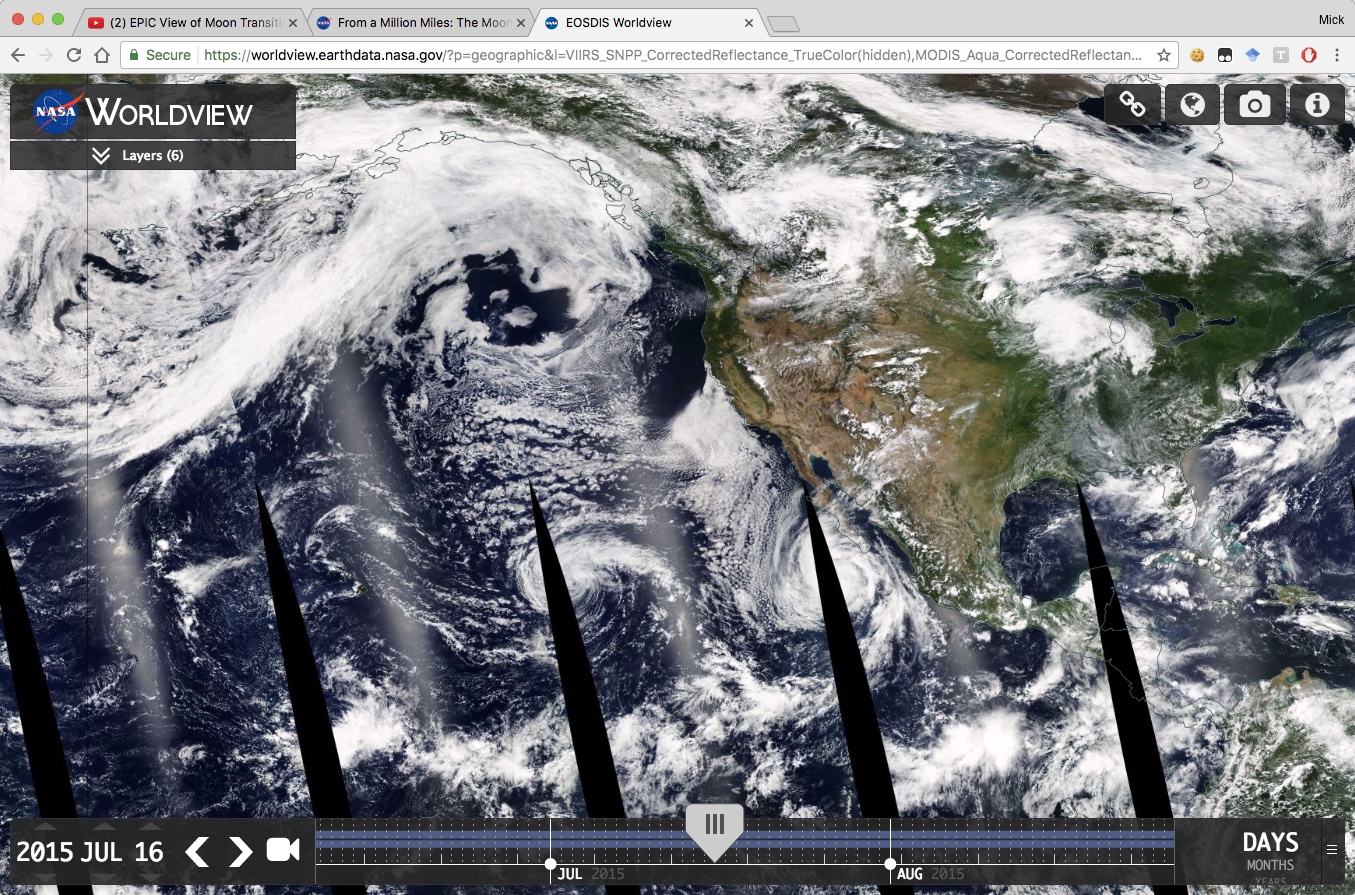 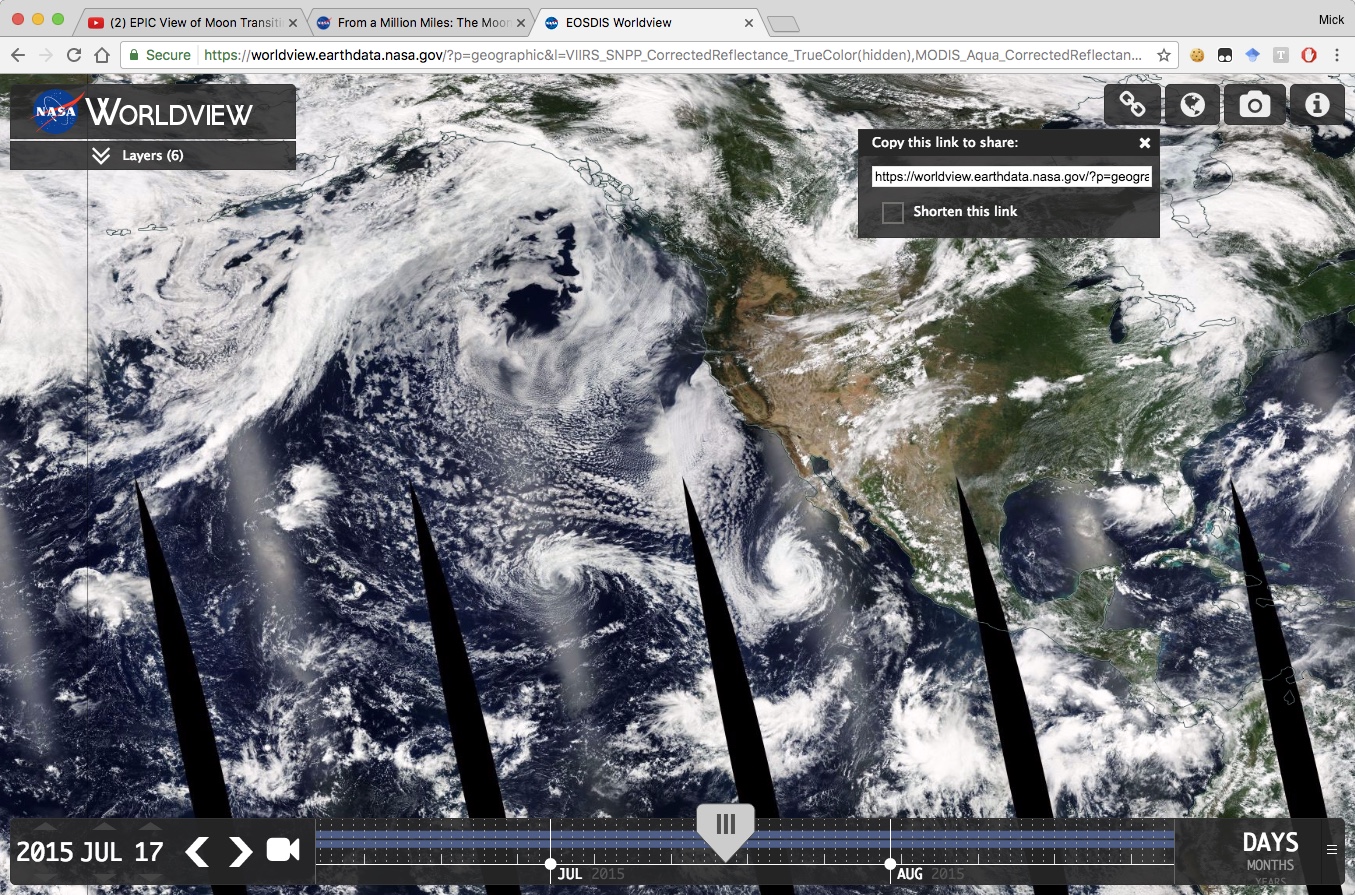 Not a vast change over 24 hours, so much less over 1/5th of that time.

It's simply a matter of scale.

As a matter of fact I addressed this very subject two years ago. This is Hurricane Delores off the coast of Baja California in this Aug. 2015 version (the earliest). https://www.nasa.gov/feature/goddar...nasa-camera-shows-moon-crossing-face-of-earth

These clouds are moving.

- The image of Hurricane Dolores is small and hard to see.

- Scale: The Earth is big and the storm is big. The speed at which it is moving and spinning and changing isn't all that great compared to the scale of hundreds and thousands of miles. So even though this is time lapse, there is less movement than they intuitively think.

- The Earth is rotating, so it's very hard to track the movement of the storm. You're trying to keep track of two independent movements. It's really hard to do that.

- Clouds don't simply blow across the sky like boats on a pond. They are very protean. They boil up and dissipate.

- The very large cloud patterns you see in images from space look very much like the much smaller local patterns we see when looking up at the sky; so people feel that the large patterns should act like the small patterns they are used to seeing.

They are relying on purely intuitive concepts about speed, scale and the accuracy of their own perception.
Last edited: Jun 23, 2017

Staff member
An interesting project would be to project DSCOVR frames to equirectangular map. Then you could see the true animation. Someone has probably done this already.
B

Well, this thread dates from 2 years ago, but I guess you've been looking for this. It's a reprojection of DSCOVR/EPIC images on an equirectangular map, and a linear interpolation of sequential images. Yes the clouds are moving and it's beautiful:

This animation was generated from the Blueturn app.
Original file is at its highest Ultra-HD resolution 4096x2048, with 120Hz framerate. Time is accelerated 7200 times (1 day in 12s).
Images from the EPIC camera, onboard the DSCOVR satellite located in Lagrange L1 vantage point, between March 12 and March 18, 2017, exactly 6 days starting and ending at 22:25 UTC.
To achieve this animation, the images are projected on a 3D Earth ellipsoid, interpolated by linear blending, and re-projected onto a 2D equi-rectangular Earth map.

Content from external source
Last edited by a moderator: Apr 28, 2019
You must log in or register to reply here.