Why do spacesuit-wearing astronauts need blankets after returning to Earth?

A friend of mine posted this meme on facebook, suggesting blankets shouldn’t be necessary with astronauts wearing spacesuits, because the suits already protect the body from extreme high and low temperatures. The astronaut is Chris Hadfield. 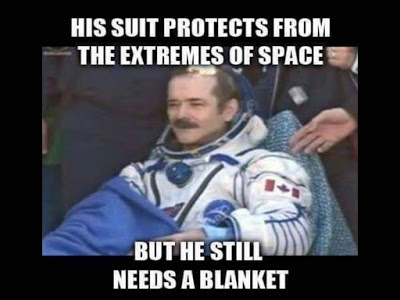 I found a counter-meme using the same graphic but providing an explanation regarding the type of suit worn as being different from the suits worn for EVA. 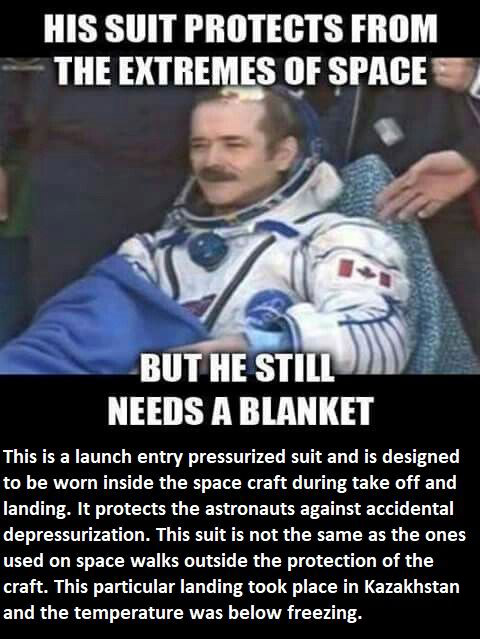 The counter-meme is incorrect regarding the temperature in Kazakhstan at that time as being “below freezing”, as there was no snow or ice but my focus is on the claim for the suit-type itself. 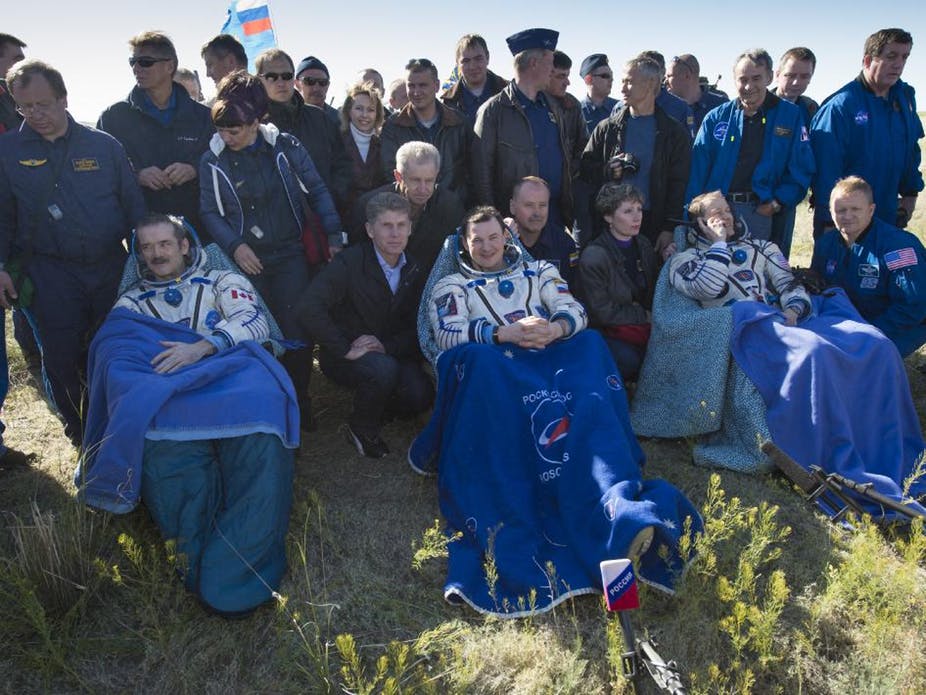 Here is a picture with different astronauts where it is assuredly cold and blankets are used. 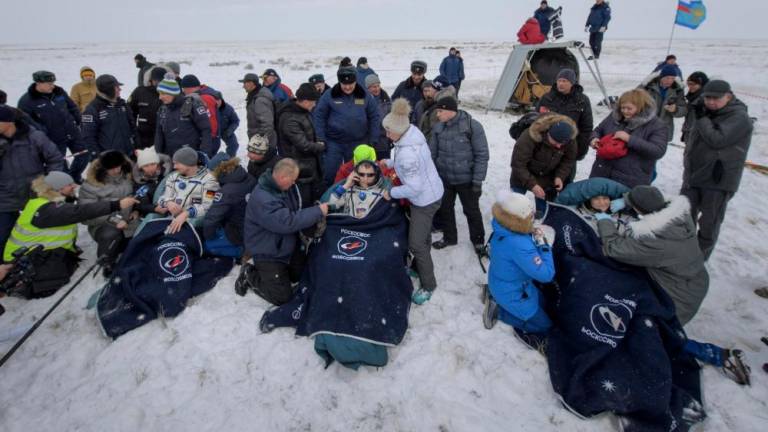 I'm having trouble finding temperature specifications regarding the reentry suits to share with my friend. Any help would be appreciated.
Last edited: Jun 4, 2019

Staff member
I suspect that there are issues with the reduced blood flow (from months in space) leading to them getting cold easier.

The Sokol is described by its makers as a rescue suit[2] and it is not capable of being used outside the spacecraft in a spacewalk or extra-vehicular activity. Instead, its purpose is to keep the wearer alive in the event of an accidental depressurisation of the spacecraft.


The Kazakh semi-desert is an ecoregion in the deserts and xeric shrublands biome, located in Kazakhstan. The climate is semi-arid and continental.

In a semi-arid biome don't assume there has to be snow on the ground when the temp is below freezing.

Z.W. Wolf said:
don't assume there has to be snow on the ground when the temp is below freezing.
Click to expand...

but the pick up and medical crews would probably be dressed warmer.

They landed on May 13th, 2013. It could have been below freezing, though the May average for the Kazakh Steppe is between 5 and 19 degrees C.

Clothes I guess can generally tell us something about the temperature, but may not always be a reliable indicator. They could be hardy souls. Or I remember winters in Canada where it would have been negative thirty or forty for a while and then a day of five or even ten below would be t-shirt weather and feel quite balmy.

Doubtful, though, that they had such an increase that time of year.

Probably it wouldn't be too difficult to find the actual temp for that day.
A

Mick West said:
I suspect that there are issues with the reduced blood flow (from months in space) leading to them getting cold easier.
Click to expand...

Close enough. Your general internal fluids redistribute themselves up there, which impacts your body's ability to regulate body temperature. The time from interface to touchdown is only 23 minutes, so by the time they're under the blankets, they've only been back at 1G for a brief time. Not long enough for their bodies to have readjusted to going from their altered temperature regulation and a relatively long period of time in a fixed temperature environment.

This video shows the process of donning the suit and gives you an idea of just how flimsy their outfit is.


It strikes me as something that would get hot fast, if you're sitting around the house in it. But, outside in freezing conditions? No thanks.

The Sokol suits are barely more robust than a light jacket. The outer shell is just canvas and the inner lining is a rubberized nylon material. Underneath, they wear something similar to humble long underwear. There is no environmental regulation, unlike the much bulkier and robust American ACES suits that have a liquid cooling system (a decision that makes sense, given that the launching and landing environments for the Space Shuttle were hot places).
You must log in or register to reply here.
Related Articles
Debunked: Apollo Lunar Module Hatch Too Small for Spacesuit
Debunked: Sandy Hook: Nuns wearing comfortable shoes
Claim: Apollo 15-17 Live TV Feed - Antenna signal would be interrupted from all the violent shaking when Astronauts touch the buggy
Share:
Facebook Twitter Reddit Pinterest Tumblr WhatsApp Email Share Link