I was cruising Ebay when I came across some of the popular passive type (no power supply needed) EMF eliminating devices found under the category "Natural & Alternative Remedies"......like stickers attached to the back of your phone, orgonite pyramids, etc.

(disclaimer: I do not possess any of these devices, nor have I tested their functionality, but I do know they are rather pricey $$)

But I also came across some "powered" devices to protect the user from the suggested harmful positively charged EMF waves by counteracting these with negatively charged waves, thereby neutralizing them somehow. It all depending on who is describing it.

Here is a device, "Total Shield EMF Protection" powered by an AC/DC wallwart (found on Amazon as well) .... 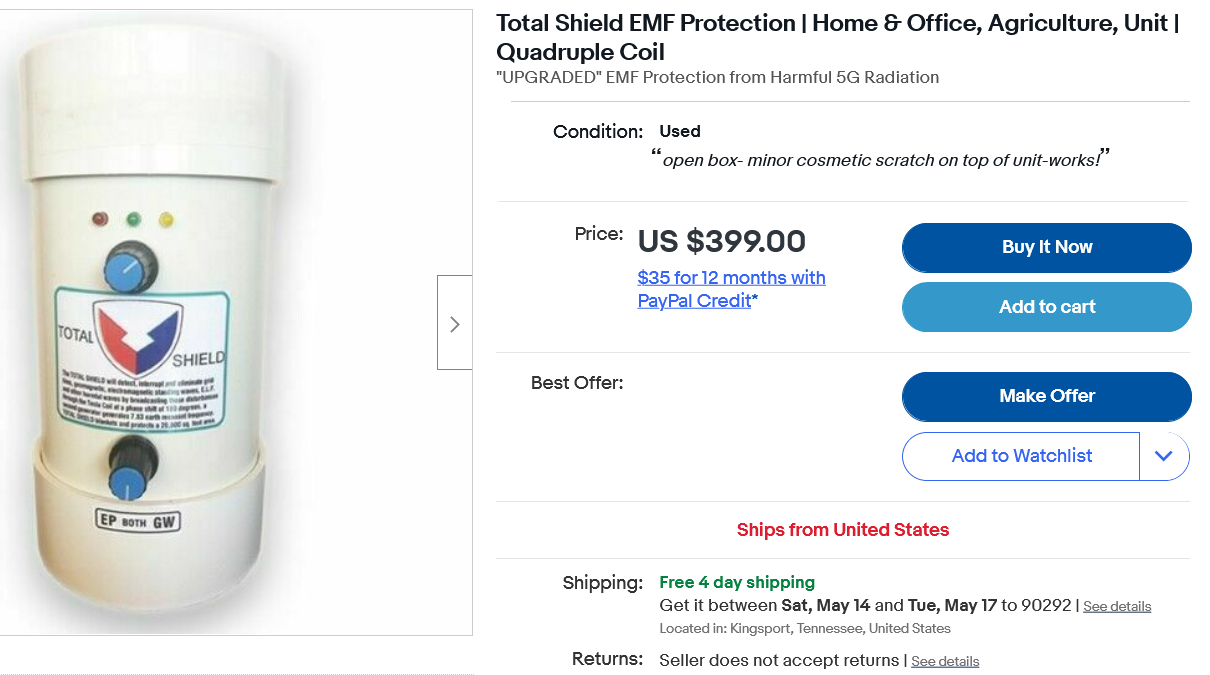 Here is another "powered" EMF protection device called the "Geoclense" that plugs directly into an AC socket.....but it looks like it's not active in any way.

The Geoclense® resin block, called Orgonium® which is unique and exclusive to Orgone Effects® Australia, is a man-made smart crystal formulation which has been frequency infused to produce a healthy "negative charge".
This negative charge frequency is carried by the electrical wiring to appliances that create EMF which all have a positive charge; the harmful component of ANY radiation field. The negative charge from the Geoclense® "neutralizes" or “harmonizes” the positive charge, thus making ALL EMF fields no longer harmful to the human meridian system, bio-field and organs.
Click to expand...

Among the Radionic devices, some use the claimed power "generated" by crystals wrapped in wire (??), while others are conventionally powered to include blinking LEDs and low power amplifiers connected to some sort of coil or antenna.

Historically radionics primarily has been an alternative health technology used for diagnosing and treating disease. However, in the 1950's agricultural devices were developed that helped farmers treat their animals and soil, replacing expensive vet bills, pesticides and fertilizers with radionic procedures. Modern improvements on those early discoveries have resulted in a renaissance of radionics on the farm.
Sadly, the use of radionics to treat humans has been outlawed in most states, with many practitioners forced to quit or go underground. The only place one can readily find skeptics using radionics is in veterinary medicine, where the prohibitive costs of hospitalizing large animals has made radionic treatments an attractive alternative, even to disbelievers.
Click to expand...

This one is called an "Analog Radionic Analyzer", aka sometimes called a "wishing machine".
It was opened-up to see What's Inside ? from the Hakaday site.

I could not find any sites testing these devices with conventional test instruments.
Many of the promotional sites I read somehow suggest that these "cannot" be tested by conventional lab equipment, because the devices work in completely different forms of energy, thereby making it a useless endeavor.

Admittedly, I am somewhat fascinated by these Radionic wishing machines.
I mean they have it all !! (almost)

I would tend to disagree with them on that point...

The placebo effect works especially well for imagined ailments. In that sense, these devices are active.

Leifer said:
making ALL EMF fields no longer harmful to the human meridian system, bio-field and organs.
Click to expand...

I'd say that this is technically true for EMF fields found in homes and public spaces, though "no longer" is misleading since these fields weren't harmful to begin with (CRTs excepted).

By now, I'm counting any quack device that's not actively harmful as a win, see https://www.metabunk.org/threads/anti-5g-necklaces-found-to-be-radioactive.12179/

Someone just needs to start spreading the rumours that it's the negatively charged rays that are the harmful ones, and that if you buy such devices you're making yourself more susceptible to mind control. Fight fire with fire. Under a pseudonym, obviously.

FatPhil said:
Someone just needs to start spreading the rumours that it's the negatively charged rays that are the harmful ones, and that if you buy such devices you're making yourself more susceptible to mind control. Fight fire with fire. Under a pseudonym, obviously.
Click to expand...

Copy and spread this message before it gets deleted
You must log in or register to reply here.