Staff member
If you want to get into the actual science, then do as I suggested. Pick something, verify it is correct, then start a thread explaining how it contradicts NIST.

Banned
If Gulf of Tonkin was never declassified, you would still continue believing any idea that it might be a lie is a crazy conspiracy theory, am I correct?

Why is his OPINION more important than that of 1,000's of other physicists and structural engineers that agree with the NIST.

Pick a point that hasn't already been debunked to death and start a thread.

Cairenn said:
Why is his OPINION more important than that of 1,000's of other physicists and structural engineers that agree with the NIST.

Pick a point that hasn't already been debunked to death and start a thread.
Click to expand...

Maybe because he's not affiliated with an agency with links to Department of Defense which stood to benefit from the attack? Show me these 1000s of scientists who agree with the NIST...

I suggest that you start with this link;

After reading in the Daily Herald the presentations made by Professor Steven E. Jones (BYU Physics) to students at UVSC and BYU, I feel obligated to reply to his "Conspiracy Theory" relating to the terrorist attacks on the World Trade Center (9/11/01).

I have studied the summary of the report by FEMA, The American Society of Civil Engineers and several other professional engineering organizations. These experts have given in detail the effects on the Towers by the impact of the commercial aircraft. I have also read Professor Jones' (referred to) 42 page unpublished report. In my understanding of structural design and the properties of structural steel I find Professor Jones' thesis that planted explosives (rather than fire from the planes) caused the collapse of the Towers, very unreliable.

The structural design of the towers was unique in that the supporting steel structure consisted of closely spaced columns in the walls of all four sides. The resulting structure was similar to a tube. When the aircraft impacted the towers at speeds of about 500 plus mph, many steel columns were immediately severed and others rendered weak by the following fires. The fires critically damaged the floors systems. Structural steel will begin to lose strength when heated to temperatures above 1000 degrees Fahrenheit. Steel bridge girders are bent to conform to the curved roadway by spot heating flanges between 800 and 1000 degrees Fahrenheit. It is easy to comprehend the loss of carrying capacity of all the structural steel due to the raging fires fed by the jet's fuel as well as aircraft and building contents.

Before one (especially students) supports such a conspiracy theory, they should investigate all details of the theory. To me a practicing structural engineer of 57 continuous years (1941-1998), Professor Jones' presentations are very disturbing.

All you really needed to do was to look for them.

What exactly do you think the gulf of tonkin attack was?


Alchemist said:
Maybe because he's not affiliated with an agency with links to Department of Defense which stood to benefit from the attack? Show me these 1000s of scientists who agree with the NIST...
Click to expand...

What does that have do to with anything? You do realise that is not evidence for a single thing except your own bias?

So as long as someone is not affiliated in any way with the accused (the DOD), they are to be believed? That's so ridiculous. It's the merits of the argument itself that should be your only guide, not whether someone is establishment or anti-establishment.

Pete Tar said:
What exactly do you think the gulf of tonkin attack was?
Click to expand...

Declassified documents have proven it to be a lie. It was a lie which was used to launch a war at the expense of 58,000 Americans and millions of Vietnamese lives so a few corporate interests could make a vast PROFIT. Such as Brown & Root (which later became Halliburton) who made BILLIONS from the war and it's come out that LBJ received massive cash payments from them.

What does that have do to with anything? You do realise that is not evidence for a single thing except your own bias?
Click to expand...

Alchemist said:
Maybe because he's not affiliated with an agency with links to Department of Defense which stood to benefit from the attack?
Click to expand...

Every government in the world benefited from 9/11. The fact that they benefited doesn't mean it was orchestrated by any of them.


Alchemist said:
Show me these 1000s of scientists who agree with the NIST...
Click to expand...

Besides the ones in the US, surely you can think of a few countries that would just love to call the US government's bluff on a conspiracy so vast and significant it altered the course of history forever?


The National Institute of Standards and Technology (NIST) — known between 1901 and 1988 as the National Bureau of Standards (NBS) — is a measurement standards laboratory, otherwise known as a National Metrological Institute (NMI), which is a non-regulatory agency of the United States Department of Commerce. The institute's official mission is to:[1]

I meant the people who directed the investigation. 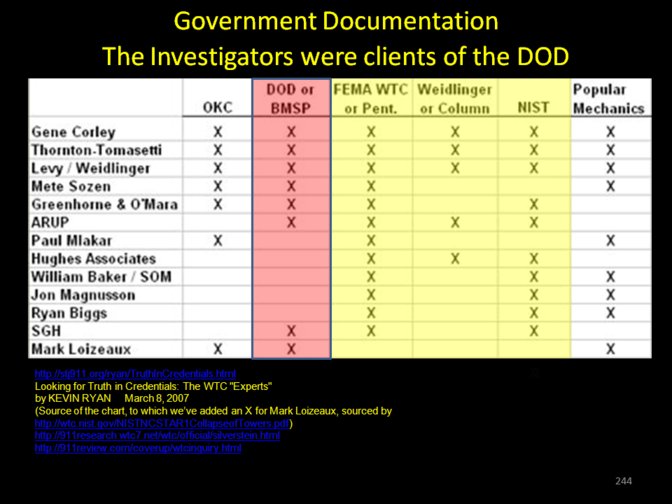 Could you please explain what the links were/are? What does it take to 'client of the DOD'? I have no idea what is trying to show, please explain.

Cairenn said:
Could you please explain what the links were/are? What does it take to 'client of the DOD'? I have no idea what is trying to show, please explain.
Click to expand...

Or don't, because it's off topic.

One topic per thread please.

sorry, good call, that might be worth a thread.

Brainiachick said:
The question was quite clear - what keeps conspiracy theories alive - if you have an opinion share it. If you don't, then that's fine.
Click to expand...

I have an opinion on what was being 'discussed', and shared it. I quoted your post as it was a pretty distinct example of using the question as a platform from which to make negative generalizations about "CTers" as a whole, which was my opinion of this thread in a nutshell.

Brainiachick said:
This does nothing other than to derail and detract from the subject matter and perhaps to insult. And quite frankly, it is irritating.
Click to expand...

First, I'd have to question where exactly this subject was going for me to have 'derailed' it. Second, I'm sorry to have insulted you. None the less, there were some earnest questions in my post as to your opinion on the 9/11 commission which you've not addressed throughout, focusing instead on my 'attack'.

Brainiachick said:
I recognise that not everyone has the ability to be a legal research assistant, but having a personal dislike or problem with certain professions (in this case Judges and the Military) should not be a reason to launch attacks on people you perceive to be in those professions. Just keep to the facts of this topic.
Click to expand...

I have absolutely nothing against Judges. I'd just be incredibly surprised if you were one, which is why I asked. You still seem to be implying you're a Judge here. I mean no offense when I say I don't think that's the case. And, as I'm sure you were suggesting, my job isn't all that difficult, no.

jvnk08 said:
Every government in the world benefited from 9/11.
Click to expand...

My opinion of why Conspiracy theories are kept alive is this.

Folks looking for someone or something to blame for their 'condition' and for what happens in the world. The ancients had the Gods/Goddesses and Titans and such. In Europe, during the Middle Ages it was 'God'. 'God' gave the 'divine right to rule' to some.

The problem with allowing ordinary folks to become leaders is that they come with built in biases and yes even prejudices and worst of all, blind spots. They make mistakes. It is easy to turn those things into elaborate conspiracies and desirable to many, since admitting the real REASONS, human 'frailty' means admitting the same about oneself.

Let me use a real world small group example. In one hobby group I am in, we do not elect or 'leaders'. Local leaders serve for several years and then step down. Folks that are interested in serving apply, the local members will be consulted, but the actual choice is not ours. However, when a change happens, the new couple will turn to a different group for support. Folks often get upset and will gossip that there is favoritism going on. It looks like that, but it is really more that folks will depend on those that they know. Not just their good points, but their failings as well. I have trouble getting places on time. NO one that knows me, would have me pick up the key for a site, so others can get in at 7 am. My best friend is very good about being on time, but you don't want to be around her if she had to get up real early in the morning. Now my hubby, on the other hand, is great at both, but he will be asleep in the car at midnight, during tear down. If you know me, my friend and my hubby, you can plan around our good and bad points. Not a conspiracy, not favoritism , just common sense.

Of course there are real conspiracies, both good and bad in government. The same is true of secrets.

Those who cling to elaborate conspiracy theories, after they have been shown the facts that deny them, like what contrails really are, do it because it allows them to explain the world in a simple form.

They tend to not be deep thinkers, or folks willing to reason things out, they want a simple answer, even if it is wrong. Conspiracy theories are a substitute for religion by some.

What keeps CT alive?
Naive idealism and outrage at the harsh pragmatic realities of the civilized world and how power is used.

Putting energy into describing conspiracies is not he best way to change things for the better and basically sidelines all energy for change to the fringe of society, but as there's a constant stream of people coming to knowledge of the world for the first time there's always an audience for it.

Staff member
Thread has drifted too far off topic, and will be closed down.