What is Carnicom Doing here?

Since he never has done any actual lab analysis, I usually discount Carnicom's claims. He usually does strange 'tests' using shampoo and pseudoscience. In this case he is using wine as a 'culture medium', and teating some sample with household lye, to end up getting a strange substance.

Anyone have an idea what he is doing and the reason why it looks the way it does?

I'm thinking a mycelial growth of fungus. We'll probably ever know, but if the test was duplicated and produced the same result without addding a tissue sample, something could have been learned.

In science, that technique is called a "control". It is learned by elementary level children 10 years old.

It looks like wine stained Rhizopus bread mold mycelium that have been given time to grow. He says he took a sample from someones mouth!
The human mouth contains all sorts of fungi and starches linger trapped in the teeth for a good while, particularly in people who tend to maintain an unkempt demeanour.
Although the owner of the mouth is not specified I have my suspicions and If hair and beard are anything to go by I imagine there is a mouth interior to match.
There is no indication that there has been a lid placed on the culture dish and so the sample is probably prone to contamination from any sort of airborne fungal spore.
He strikes me as a kid with a chemistry set who never bothers to read the manual or make an attempt to learn what the set is meant to instruct.
He seems to just mix stuff together randomly hoping to make it fizz or do something cool.

Staff member
It's a standard school experiment, to take various things, stick them in agar in a petri dish, and see what grows. There's a great variety of bacterial and fungal growths in all colors, rates of growth, and shapes. Here's a fourth grade (9 year old) science fair exhibit: 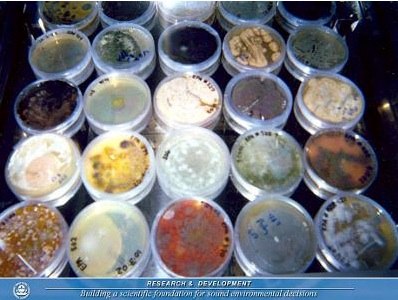 But without precise details as to what he did, a repeat, and control experiments, all you can say he did is grew something in a petri dish.
Last edited: Nov 20, 2013

In 8th grade (middle school), I coughed onto a petri dish....and the teacher publicly showed the class what had grown, based on my cough.. I was so embarrassed when the class said in a chorus .... "ewwww"....
C

He is actually on to something. My aluminum and barium levels are 100x normal and I am sick as a dog with pain. Also, grape juice swish will cause fibers to come out. I love cloud watching and never ever remember the sky loaded with chemtrails. He is on to something. This sucks. If you get sick, you will believe.

chemtrailvictim said:
He is actually on to something. My aluminum and barium levels are 100x normal
Click to expand...

What levels are they?

What lab did you testing, please?

chemtrailvictim said:
He is actually on to something. My aluminum and barium levels are 100x normal and I am sick as a dog with pain. Also, grape juice swish will cause fibers to come out. I love cloud watching and never ever remember the sky loaded with chemtrails.
Click to expand...

I have never seen chemtrails at all that I could recognise as such - what is it that identifies them as chemtrails??

This sucks. If you get sick, you will believe.
Click to expand...

I've been sick lots of times - and I believe Carnicom is a fraud - and this "testing" is just another example of how he does it.

Testing can be a problem. There have been reports of folks with high levels of benzene in their blood, after the Gulf oil spill. However, those tests were done, 3-6 months and even as much as year after the spill. The testing lab is one that is on Quackwatch's list. What concerns me is that folks are getting 'de toxed' because of those. Unneeded and possibly dangerous

chemtrailvictim said:
Also, grape juice swish will cause fibers to come out. .
Click to expand...

This is from the tannins in grape juice (or red wine), which bind with proteins in your saliva and cause them to precipitate out.

I was wondering why only grape juice.
D

Belfrey said:
This is from the tannins in grape juice (or red wine), which bind with proteins in your saliva and cause them to precipitate out.
Click to expand...

This is NOT precipitate. They are fibers. I have dried them out and they are magnetic. The spraying here in Denver is beyond belief. I have been a huge skywatcher and love meteorology. What I am seeing has nothing to do with contrails. This stuff is chemical. My aluminum and barium were done thru labcorp.
I am sick from this constant spraying. I feel sorry for those that are blind to this. Just type in Denver and Chemtrails to a search engine.

Have you taken the fibers to a college and seen if someone can analyze them for you?

Where you Aluminum and barium levels above normal? Have you asked family (that lives with you) or close neighbors to also be tested?

my 5th grade science fair project was more rational than the postings in this thread.


and yes they are proteins, and no they are not magnetic. you are mistaken. Would you entertain the reasons why or just dismiss them? if you would id be more than happy to provide them.

DenverChemtrails said:
I have dried them out and they are magnetic.
Click to expand...

Unlike aluminium and barium.

he skirts this by trying to identify organic protein complexes and amino acids, mentioning a iron complex somewhere in there. he fails to mention that due to the absolute prevalence of microbial life on our planet these things are eeeeeeverywhere. his technique allows him to never have to actually identify anything explicitly.

Having done some work with edible fungus cultures myself i can attest to the hilarious PITA of sterile technique and from what i can see in the few shots you can see his 'lab' in, it doesn't look much more well equipped than mine has ever been. im sort of impressed to see a liquid chromatography column but that doesn't really say anything at all. ive seen MDMA cooks use them to produce a more pure product.

id also like to point out he does not seem to be working in a pos pressure environment or under a laminar flow hood at all times either... i see a power supply made of daisy chained 6v batteries.. all things i think are perfectly acceptable for a home lab, yet id never make such claims from my home lab(when i had it set up, ive since strayed a bit from my chem/bio hobby). i am still stuck on the arbitrary use of red wine as a culture medium. that screams incompetence on so many levels. 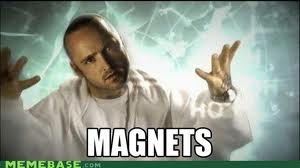 Edit: i also see canning jars being used, tupperware... things that are fine if you are making drugs or growing shitakes, but not okay if you are warping the minds of vulnerable people around the world.

I see he is holding his post column purified protein extract in a canning jar while also using the jar lid... now i know for a FACT the metal/paint/rubber seals on those lids leach and are not even up the my standards, let alone that of biological research..... also note the jar is outside a flow hood, with a camera held above it post purification with nothing preventing debris from falling in..... incompetence. i wouldnt culture lions mane mushroom mycelium under these conditions.....


blah blah blah we cant all have infinite money and resources of the government blah blah. Ive managed. on $10 an hour with no donation buttons at that.....

and then i found this page... http://www.carnicominstitute.org/articles/bio2011-4.htm 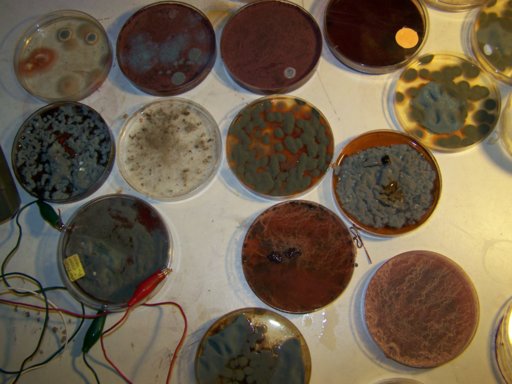 several(most) of these show multi point contamination, some even standard bread mold the top left shows a mold competing with a bacterium. you can tell by its ringed growth pattern and failure to cover the growth medium before sporulating and turning green/grey/blue....

"An important observation is that, regardless of the variation in surface morphology, color or structure, the underlying spectral signature of the organism appears to be the same."

What the fuck!?! regardless of what you see in the images, a test that has nothing to do with mycology says they are the same... ookay..

with that ill be done.... i would however suggest he culture this thing of his, get a high res camera, and use it to make cool nebula/galaxy images because it sure looks cool and thats about all its worth.

edit: "it * doesn't* look much more well equipped"
You must log in or register to reply here.