Wayne Coste has a new whitepaper:
"Investigating the Mechanics of Destruction at the Twin Towers on 9/11: The Case for Propelled Demolition
By Wayne H. Coste, PE "

This paper proposes a previously undiscussed method, as a hypothesis, for the destruction of the Twin Towers on September 11, 2001. While it is not possible to understand all the factors and mechanisms that were employed in the destruction of the Twin Towers, given the immense combination of possible methods that could have been employed, the hypothesized mechanism is in agreement with key observations.
...
With NIST’s abdication of an official explanation for the structural behavior, much of the discussion over the last 19 years about the cause of the destruction of the Twin Towers has focused on the use of “explosive detonations.” However, there is scant evidence in the audio record for the use of traditional molecular explosives (e.g., “high explosives”) which are typically heard during the controlled demolition of structures. Furthermore, the remnants which consist of the intact parts of surviving structural elements – including steel beams, columns and connections – do not exhibit a widespread pattern of damage to support “explosive detonations” as a significant component of demolition process. For much of the building’s destruction, the observations show a highly energetic propelling force that was activated floor-by-floor – with the origin of this force centered at the building’s core / elevator shafts and radiating outward in all four cardinal directions (north-south-east and west). This observed propelling force is hypothesized to be based on a nano-thermite material that was “tuned” to be more like a rocket fuel than either an explosive or an incendiary. This “rocket fuel” propellant impacted the outer perimeter columns with immense simultaneous outward forces which the building was not designed to withstand. This resulted in the separation of the floor trusses from the core columns at its weakest point. That weak point was the interior bolted connections where the floor trusses were tied to the solid steel channels along the outside of the core. These channels, themselves, were solidly bolted to the core. The outer perimeter wall sections were propelled outward and peeled downward and outward through most of the height of the towers. The hypothesized mechanism would have progressed down the structure at a relatively constant rate optimized by mechanically determined parameters using, and leveraging, gravitational forces.

Content from external source
I have only just begun browsing.

Staff member
Interesting. He seems to be starting from a strong belief that A) the towers could not have collapsed (in the way observed) from impact and fire alone and B) Nanothermite was used.

He's also faced with a lack of evidence, which he's been forced to acknowledge.

However, no significant, widespread damage has been documented in the debris that has been identified as
confirming the use of forces consistent with “explosive detonations” to destroy connections –

As shown in Figure 1, high explosives forceful enough to cut steel would leave behind an unmistakable
forensic trail7. Damage from this mechanism was not documented in the remnants of the bent, ripped, torn
and otherwise deformed steel.

Content from external source
So he settles on the "nanothermite rockets" theory - which is not really new, as it was discussed by Harrit years ago. But since he's reasonably rigorous he notes:

As shown by the red arrows in Figure 5, the propellant was assumed to be activated around each floor in all directions simultaneously. This way, the perimeter columns around the outside of each floor are all pushed outward simultaneously. In accordance with Newton's third law which states, “for every action, there is an equal and opposite reaction”, The propulsive force to push the exterior perimeter columns outward must be created by an equal “reactionary” force in the opposite direction – such as into the region of the core columns and then out through the opposite side. 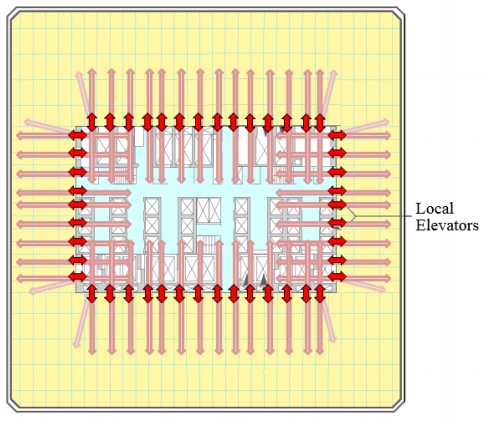 It gets more involved:

He does not actually suggest rockets attached to the floor slabs (which you'd think is what would be needed) but instead theorizes:

In this case, the hypothesis suggests that a material, possibly a propellant, was applied to the interior walls of the elevator shafts such that the final product resembled a freshly painted wall.
...
It also is quite possible that the material could have been pre-manufactured as panels that would then have been installed on the inside walls of the core / elevator shafts.

Content from external source
The rigging of the building is discussed:

This amount of propellant would weigh approximately 1,900 tons and that amount of material would
require approximately 90 truckloads, using standard tractor trailers. Delivery and storage might not be
problem if the material was delivered labeled as 0.755 cm thick (0.3 inch thick) “paneling” or “flooring”
material. Even watchful guards and bomb-sniffing dogs would not be suspicious of the delivery of such
materials – especially if the delivery took place over the course of several months.

Content from external source
The "panels" theory is finessed to explain things like the "molten iron" (a glowing debris stream, probably just burning stuff) in one corner. 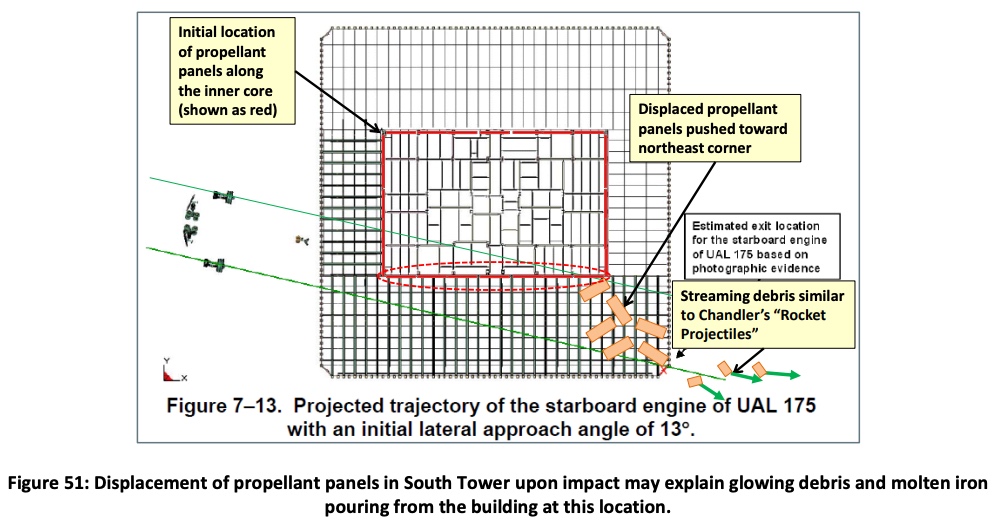 This paper has developed a “propelled demolition” hypothesis that suggests the interior of the elevator
shafts were lined with panels of nano-thermite based propellant consisting of up to (possibly) 40 layers of
red/gray material, providing a propulsive energy content of approximately 9.45 kJoules /cm2. This
material was activated floor-by-floor in all directions to eject the perimeter columns which then
simultaneously severed the bolted connections between the floor trusses and the channels (attached to the
core). This process created the outward ejection of debris, some of which had propellant impinged onto it
as documented in David Chandler’s “Rocket Projectile” analyses.

The reactionary force (opposite to the forward direction of the propellant) then created the observable
“rooster tail,” in which debris from the demolition travels upward at a shallow angle against gravity as it
travels outward and away from the epicenter of the demolition. These observed “rooster tails” are
inconsistent with a gravity-only collapse hypothesis and need a mechanism to create an upward trajectory.

Content from external source
Of course this entire theory is nonsense. It relies on the secret installation of 1,900 tons of magical panels, links with some equally magical ignition mechanism that, even if it worked perfectly, would do little more than move air around. Panels which can, in one corner of the build, slowly burn into a pool of molten iron, while when arranged inside the elevator shaft can then propel sections of the outside of the building UP into the air.

It's a fascinating exercise in confirmation bias. Does it need addressing? I'd almost say no. AE911 has hidden behind the hand-waving of "just asking questions" for many years. They haven't got behind an alternative hypothesis because there isn't one. Coste thanks "Jim Hoffman, David Cole, Niels Harrit, Steven Jones, Richard Gage, and especially David Chandler" which suggests AE911 is somewhat behind this. Would it be a good thing if they were to actually start pushing a specific collapse mechanism? One that is so obviously ridiculous?

Then again, perhaps by addressing this, by engaging them on the topic, we could help them extend their own "debunker" mindset that they have already applied to thins like the Pentagon missile theory and the dustification theory.

If I were to address this paper, I think it would be best to start with their more fundamental misunderstandings - things that are false, and yet have become axiomatic for them. Thinks they feel refute the "official story" and hence remember the need for any rigor in their derived hypotheses. I think I'd start with:

These observed “rooster tails” are inconsistent with a gravity-only collapse hypothesis and need a mechanism to create an upward trajectory.

Content from external source
Where would Coste be if it were demonstrated (and I think it has been, several times) that the "rooster tails" are actually NOT the result of an upward trajectory? Would the realization of his years-long mistake trigger the reexamination of other assumptions? Maybe.

Fascinating stuff (and in some ways a welcome distraction for the current virus news).

I have tried several times for Coste (and Chandler, and others) to seriously look at the Harrit et al (2009) data, which actually refutes its own conclusions in several ways. The most significant, I think, is that the DSC data must be totally dominated (>>95%) by hydrocarbon combustion, such that any hypothetical thermite reaction would contribute well under 5% (or none) of the measured heat release. This in turn means that none of the main features of the DSC curves they present can be identified as caused by thermite - there is zero evidence for a thermite reaction in the the DSC data.

His tactic has been to link to old Harrit videos and the like, and otherwise ignore me.

But now the assumption that there WAS nanothermite, proven by Harrit et al, comes back at him.

So how does this theory account for the "role" of the planes and their impact on the towers? In both towers the sections above the plane strikes move downward after different amounts of time post plane strikes. The plane destruction on 1wtc was symmetrical about the N-S axis and with 2wtc the motion strongly suggests that the plane's damage was angle through the core which appears to explain the top sections tilting as it descended. Both top falls delivered enormous mass which came crashing down through the floor systems, destroying them at about 65mph which leaving many core columns completely unscathed. The collapse did not accelerate but appears to move at a constant speed indicating that there was a consistent amount of resistance provided by the undamaged floor plates.

The interior floor plate collapse would leave the facade without lateral support and provide the over pressure to blast contents outward as the air between the floors is not compressible. The pulverized contents is seen blasting through the perimeter windows all around the tower floor after floor at the front of the descending collapse... So essentially the descending floor plates created an avalanche of floor plate destruction... and the columns left behind were made unstable by losing lateral bracing the floors had provided. Bulging mass and the air over pressure ahead of it led to the breaking of exterior panel joints and the panels falling/peeling away from the tower.

The again there were no reports of and observing the installation of the Coste panels in the cores of both buildings... an enormous undertaking.

Jeffrey Orling said:
The interior floor plate collapse would leave the facade without lateral support and provide the over pressure to blast contents outward as the air between the floors is not compressible.
Click to expand...

Slight nit to pick: air is definitely compressible, but to compress air creates pressure, doing it suddenly creates a pressure front, and then you have the overpressure effects you've described. (If the building had been filled with liquid, ...)

Mendel said:
Slight nit to pick: air is definitely compressible, but to compress air creates pressure, doing it suddenly creates a pressure front, and then you have the overpressure effects you've described. (If the building had been filled with liquid, ...)
Click to expand...

You're correct but not under those circumstances... when the container is too weak... glass stattered.
You must log in or register to reply here.