Cairenn said:
Gas is cheap in Venezuela because it comes from a government owned company. They sell it for less than it costs to make. Many authoritarian governments do that. It is the modern form of 'bread and circuses'.

That does mean they skimp on a lot of things. I think that every governement owned oil company, except, I think Norway, are seeing reduced production. It is hated 'big oil' that spends money on developing ways of increasing oil and gas production.

That is the trade off for cheap gasoline.
Click to expand...

So the govt in Venezuela is selling gas for less than it costs to produce across the board, is it? Not to mention 'authoritarian'. I think you might look a little closer to home for that realisation.

Here's what Jimmy Carter has to say about Venezuelan electoral practice:


Mérida, 21st September 2012 (Venezuelanalysis.com) – Former US President Jimmy Carter has declared that Venezuela’s electoral system is the best in the world.

Speaking at an annual event last week in Atlanta for his Carter Centre foundation, the politician-turned philanthropist stated, “As a matter of fact, of the 92 elections that we’ve monitored, I would say the election process in Venezuela is the best in the world.”

So when you said 'authoritarian', you meant 'committed to democratic principles', yes?

If you prefer a more 'conservative' view [...], then how about this:


The U.S. Should Learn From Venezuela How to Hold Elections - Forbes

Chavez was re-elected three times; survived a CIA backed coup attempt in 2002 because the people came out on the streets and said they weren't having it. Imagine? And that's all you can do in the US....The Chavez govt nationalised the oil industry, rightly, and the owners were paid market price. The dividends from oil were used to improve the lot of the poorest, to begin. I'm not going to give you the lesson you need on all this, though. What you might do, until you learn up a bit, is desist from presenting fiction as fact and learn about what you're saying before you say it.

Venezuela, like everywhere else caught in the shitstorm caused by criminal bankers and profiteers in 2008, has had its economic problems - but unlike the crippled US 'economy', the Chavista govt spent its way out of trouble and in the last twelve months the economy has grown by 4.2 percent.

[..] more here, [...] from the Center for Economic and Policy Research, Washington, DC: 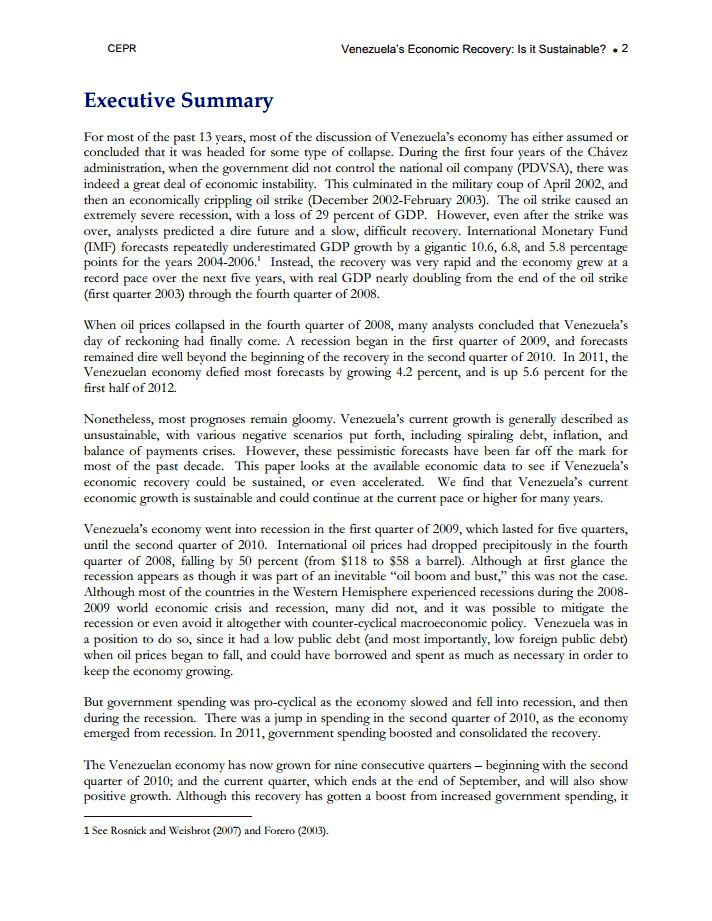 Hugo Chávez’s presidency (1999-2013) was characterized by a dramatic concentration of power and open disregard for basic human rights guarantees.After enacting a new constitution with ample human rights protections in 1999 – and surviving a short-lived coup d’état in 2002 – Chávez and his followers moved to concentrate power. They seized control of the Supreme Court and undercut the ability of journalists, human rights defenders, and other Venezuelans to exercise fundamental rights.

By his second full term in office, the concentration of power and erosion of human rights protections had given the government free rein to intimidate, censor, and prosecute Venezuelans who criticized the president or thwarted his political agenda. In recent years, the president and his followers used these powers in a wide range of prominent cases, whose damaging impact was felt by entire sectors of Venezuelan society.

Venezuela does subsidize the cost of gasoline.,
http://money.cnn.com/2013/03/06/news/economy/venezuela-gas/index.html

lee h oswald said:
So when you said 'authoritarian', you meant 'committed to democratic principles', yes?
Click to expand...

I think Chavez's commitment to "democratic principles" was was somewhat suspect- as the Human Rights Watch put it:


The accumulation of power in the executive, the removal of institutional safeguards, and the erosion of human rights guarantees have given the Chávez government free rein to intimidate, censor, and prosecute Venezuelans who criticize the president or thwart his political agenda

A Decade Under Chávez documented how President Chávez and his supporters in the National Assembly carried out a political takeover of the Supreme Court in 2004, expanding it from 20 to 32 members and filling the new seats with government supporters. This packed Supreme Court effectively abdicated its responsibility to safeguard fundamental rights in prominent cases involving the media and organized labor.

A Decade Under Chávez documented how President Chávez and his supporters in the National Assembly had undermined freedom of expression through a variety of laws and policies aimed at reshaping the content of and control over the media. Since then, the Chávez government has further expanded and abused its powers to censor its critics.

A Decade Under Chávez documented how President Chávez and his supporters had aggressively sought to discredit the country’s human rights defenders by accusing them of receiving support of the US government to undermine Venezuelan democracy.

Radio Caracas Televisión (RCTV) was once one of Venezuela’s most widely watched television stations and a constant critic of President Chávez. By 2006, it was one of just two stations available without cable television service that maintained an editorial line openly critical of the government.[161]

In response to this critical coverage, President Chávez had repeatedly threatened not to renew RCTV’s broadcasting concession—including in November 2006 after the channel broadcast footage of Chávez’s energy minister telling his employees at the state oil company that they should resign from their jobs if they did not support the president’s political agenda.[162] The following month, President Chávez made good on the promise, announcing on a nationwide broadcast that he would not renew RCTV’s broadcasting license when it expired in 2007. Filmed standing on a military parade ground, he declared that Venezuela would no longer tolerate private media “at the service of coup-plotting, against the people, against the nation, against the independence of the nation, and against the dignity of the Republic!”[163]

Just for information - much of the $550 Billion spent worldwide subsidising fossil fuels is spent by countries where it is produced selling it cheap to their population - and generally it seems the more oil & gas they produce the more they subsidise their own population.

And those countries are often not exactly shining lights of fair and open government!

Mick said:
Fair elections does not equal non-authoritarian. [/ex] Venezuela does subsidize the cost of gasoline.

[..]. Your sources are seriously biased. I never said they didn't subsidize gas for the poor ('across the board', remember?) who need it! Remember? [...]

I think you just made my point for me. Chavez got reelected because of the all the free and cheap stuff he provided to poor folks.

The problem is, is that the COUNTRY will be paying the price for that for a long time.


The problem is that the country will be paying the price for that....

lee your comments were removed because you violated the politeness code.

You did NOT correct anything. YOU MADE the point of WHY they subsidize the gasoline price.

MikeC said:
And those countries are often not exactly shining lights of fair and open government!
Click to expand...

Sorry, but you seem to be inferring that there is such a thing as 'a fair and open government'? Where?

lee h oswald said:
Sorry, but you seem to be inferring that there is such a thing as 'a fair and open government'? Where?
Click to expand...

Instead of using the oil wealth to build a foundation for prosperity for his people, Chavez 'bought' them off.

Only time will tell if any of the 'advances' that happened during his time in office will continue. I expect it will really depend on what those that fled him are willing to do.


Nearly 14 years after President Hugo Chavez took office, and despite the biggest oil bonanza in Venezuela's history, there's little outward sign of the nearly one trillion petrodollars that have flowed into the country.

Venezuela has undoubtedly changed during Chavez's tenure. The populist president has used the oil wealth to buttress his support through cash handouts, state-run grocery stores and a gamut of other social programs. With more money in the economy, incomes are higher and the number of people living in poverty has fallen.

Unemployment has dropped from more than 13 percent in 1999 to about 8 percent....
The country has also achieved rapid improvement on the U.N. Human Development Index, which measures a range of indicators from living standards to life expectancy. ...

"It's overwhelmingly clear that Venezuela has wasted the windfall," said Francisco Monaldi, an economist and director of the International Center of Energy and the Environment at Caracas' IESA business school. "You should have had much greater economic growth, much greater reduction of poverty."

Among Latin American countries, the economies of Brazil, Chile, Peru and Argentina all have expanded more rapidly than Venezuela's since Chavez took office in 1999, recording average growth between 3 and 5 percent a year.

Venezuela, by contrast, averaged a 2.8 percent annual increase of gross domestic product between 1999 and 2011, according to International Monetary Fund figures. By that measure, the country was outperformed by every other member of the Organization of Petroleum Exporting Countries except Libya. Even war-torn Iraq posted higher growth.

Some Venezuelans, such as tennis instructor Naybeth Figueroa, say Chavez has simply channeled money toward his "Chavista" supporters while neglecting deeply ingrained problems such as soaring murder rates, inflation, crumbling infrastructure and poor government services. Venezuela now ranks among the most violent and corrupt places on earth.
...
When a powerful explosion rocked the Amuay oil refinery last month, killing at least 42 people, several experts swiftly blamed the country's worst-ever refinery disaster on a lack of maintenance.

Last month, a deadly prison riot killed more than two dozen in an overcrowded penitentiary, the latest in a rising tide of bloodshed that left 560 people dead in the country's prisons last year.

That disconnect, between falling poverty and worsening infrastructure, points to what critics say has been a failure to address the underlying causes of many of the country's ills. Yes, government food giveaways mean millions of poor people have more to eat, but critics argue that Chavez's largesse has ignored basic remedies needed to modernize the nation...

Despite the oil boom, the government has more than tripled its public foreign debt from $24.2 billion when he took office to $88.7 billion in the first quarter of this year. Much of that foreign money has come from China, which has lent Venezuela more than $36 billion.

By contrast, other oil-rich nations such as the United Arab Emirates and Norway have saved billions in investment funds.

A real paradise. Don't ask about the murder rate.

I understand that it is even higher than Mexico's
You must log in or register to reply here.