Using Google Earth Identify Contrails and other Objects in the Sky

Ross Marsden said:
Trailspotter, could you give us a bit of a tutorial on how you model contrails, or the path of an aircraft, on Google Earth?
Maybe start a new thread for that. Thanks in antici - Pation.
Click to expand...

This is something that I have learnt from Mick on Contrail Science (I was there under my first name Alexey). Mick is a much more advanced user of Google Earth that I am and therefore is in a better position to give you a tutorial. He also gave me a few hints about some simple tools provided by Google Earth that I have been using here.

To model a contrail I use 'add path' tool. It allows to draw a line of chosen width, colour and transparency and place it at any given altitude above the ground.

I use 'add image overlay' tool to find the coordinates of modelled contrails. It allows the superpositions of maps and satellite images that can be resized and rotated to match them to the ground features. In the investigation of the Manchester contrail star, I have overlaid FR24 screenshots of selected flight routes and used the lines of these routes as a guide for modelling their contrails. Each contrail was placed at the altitude of the corresponding flight, as reported on FR24.

My favourite Google Earth tool is 'add photo'. For the known position and orientation of the camera and photo's FOV
it allows a direct comparison of the actual camera view with a modelled Google Earth view from the same location. What is more important, this tool can be used in combination with other Google tools to find an exact camera location, if unknown. Below is how it is done for the photo of the contrail star from ATS. 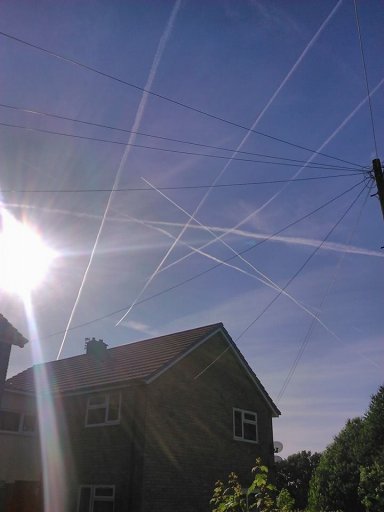 I've selected this photo for two reasons. First, it shows that the contrails crossing at the top point of the 'star' are very young and have not been carried by wind too far from the modelled positions. Second, the photo shows the front part of a house, the location of which probably can be verified on Google StreetView. If my identification of the corresponding flights is correct, the time of the photo is 17:39 UTC. The time is important here, as the Sun position can be used to narrow down the search area.

in Google Earth menu bar, there is a tool for showing sunlight for a given date and time. By adding the Sun position to the contrail star model and viewing them from different ground locations in the Greater Manchester area, I have found that their mutual positions match the photo the best in the neighbourhood of Brinnington, a north-eastern suburb of Stockport. 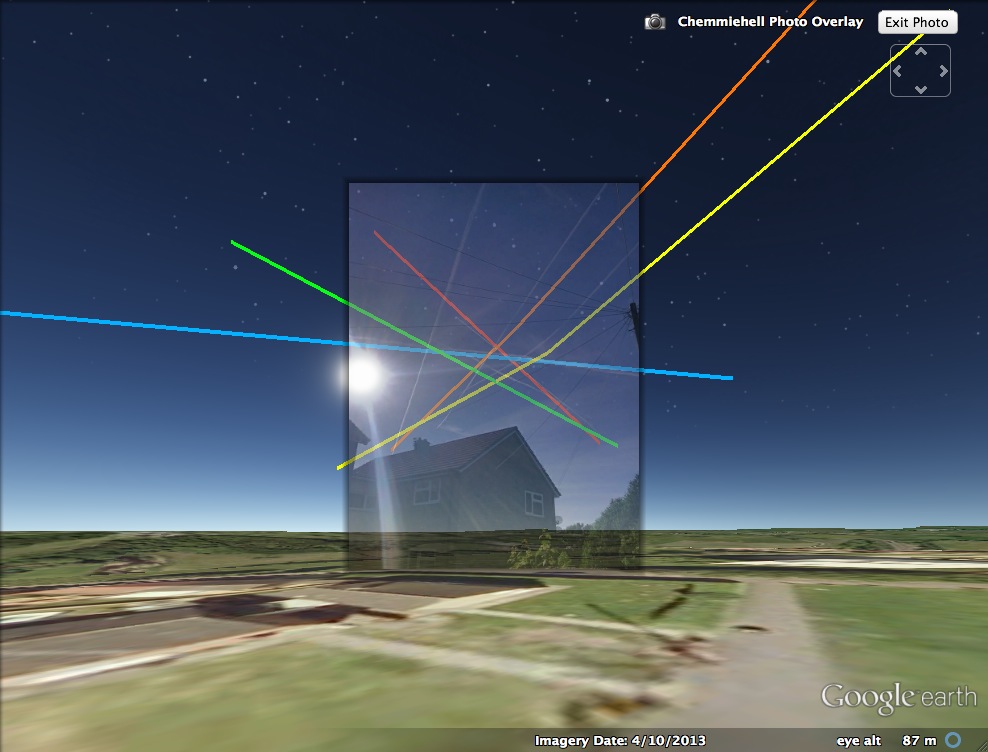 I have explored this area further on Google Earth and Google StreetView and found the house, the details and surrounding of which match well those on the photo: 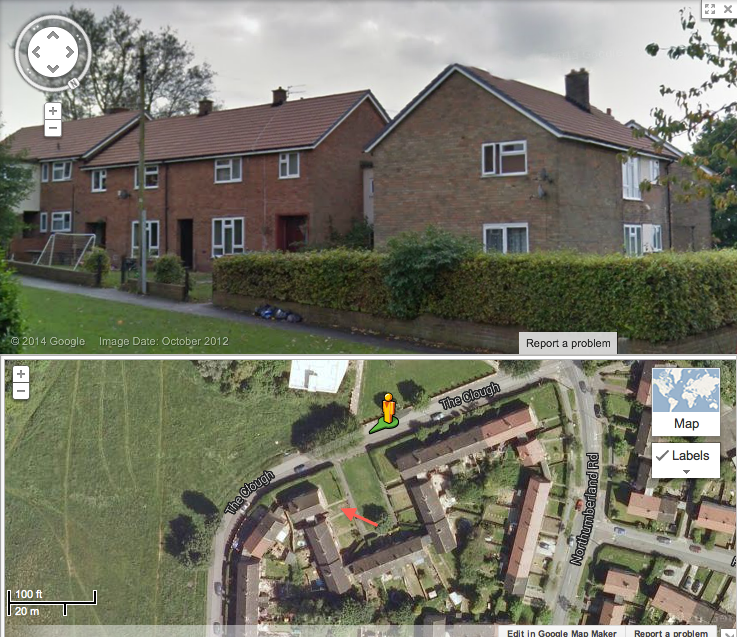 The photo probably has been taken from inside the front court where Google StreetView car did not go.

The results of this exercise ultimately prove the identification of the flights that formed the Manchester contrail star.
Last edited: Jul 10, 2014

Staff member
Depending on location, turning on 3D Buildings can also be very helpful. Like street view but less constrained, and you can see the sky

Mick West said:
Depending on location, turning on 3D Buildings can also be very helpful. Like street view but less constrained, and you can see the sky
Click to expand...

Yes, I always use this option, where it is available. When I was exploring the row of fallstreak clouds in Seattle, I noted there were not only 3D buildings but surrounding vegetation as well:
https://www.metabunk.org/threads/interesting-clouds-row-of-fallstreak-clouds.2155/#post-106800

Staff member
Moved this into its own thread. Stickied.

At this rate "chemtrails" may be debunked before they have finished forming. Bravo.

How would you use the program "Stellarium" and Google Earth, together?


I'm brand-new to Stellarium.
There is also SkySafari_6.
Last edited: Jul 12, 2019
You must log in or register to reply here.

Whats that thing in the.. sea?

Catalina Island Being Obscured by the Curve, from Huntington Beach