Is anyone on here qualified to understand - and explain in layman's terms - whether this patent (images below) has any legs at all, or whether it's actually about as scientific as Alice in Wonderland?

On the one hand, it would seem to be a dream come true for believers, with the US Navy openly describing the operations of a hybrid air/space/underwater craft that:
On the other hand, it's surely beyond belief that the US Navy would openly patent something that is real and yet sounds closer to the Millennium Falcon than it does anything flying today. Why give the Chinese and the Russians a leg up?

Equally, although it's ostensibly in English, the terms used (e.g. Prigogine effect, Dirac virtual pair production, vacuum field fluctuations, etc.) are so beyond the understanding of 99.999% of people, that we wouldn't know if this was truly feasible or merely some form of sophisticated in-joke for physics PhDs.

My understanding is that the current view is either the US Military files patents based on highly speculative theoretical physics "just in case." And/or they are misinformation of some kind, written by a qualified physicist (Pais) to give them an aura of realism. But they do not stand-up under analysis by subject matter experts.

The US Military can appear to be a strange organisation from the outside, often seemingly spending what seems to be large amounts of cash on highly speculative areas, but I imagine to them with a budget of trillions spending a few million dollars on this kind of thing must be worth it, I imagine they are worried about getting caught out on some game changing technology and have enormous amounts of money to burn on it.

It would be interesting if there were some documented past case of this happening, i.e. the US Mil being caught out by a scientific advance that seemed left field at the time. Maybe it's hangover from things like the Moon Race / Manhattan Project and them wondering what it would be like if they were too far behind on those.

Stuff like quantum computing and Shor's algorithm is a possible area where they need to be careful for encryption etc.

This reports on some of the experiments that were don on the back of this patent.

This statement from NAWCAD also raises a few questions about why these experiments were funded and supported so extensively by high-ranking scientists within the organization in the first place. Despite every physicist we have spoken to over the better part of two years asserting that the "Pais Effect" has no scientific basis in reality and the patents related to it were filled with pseudo-scientific jargon, NAWCAD confirmed they were interested enough in the patents to spend more than a half-million dollars over three years developing experiments and equipment to test Pais' theories.
Click to expand...

Those patents are a bunch of nonsense (by the way, they were reported by The War Zone some months ago). So why is US military spending money on this? Well, because some idiot managed to put his hands on the purse strings.. same as with the last UAP report, or the studies on parapsicology and mind control which wasted money in the 60s, or the more recent fake bomb detectors used in Iraq:

In the decade following the late-1990s, a network of intrepid fraudsters sold fake bomb detectors worth tens of millions of dollars to security services around the world, most notably Iraq, Thailand and Mexico. The fake bomb detectors, variously marketed as the ADE 651, GT200, Alpha Six, and, earlier, the MOLE Programmable Detection System, Quadro Tracker, and Sniffex, were completely non-functional and sold solely for the purpose of enriching its producers – and the people they bribed to sell the phony goods.
Click to expand...

It is worth noting that while a patent is supposed to be issued only for something that actually works, in reality the Patent Office does not have the facilities to test every invention for which a patent is sought, and largely relies on the honesty of the applicant in many cases. Last year, the US patent office received over 600,000 applicaions, and granted over 300,000 of them, the possibillity of meaningfully testing them all is drowned in the sheer numbers. (See below) So, many patents exist for inventions that do not do what is claimed -- however, my understanding is that a patent for a non-working item, if it is ever demonstrated not to actually work, is then considered invalid. That still leaves a number of patents in existence for items that would not work, if anybody ever tried to build one.

Theranos held over 700 patents worldwide -- their story would have had a very different ending if those patents had all been for things that actually worked!

Which is all to say: don't assume that something is real just because a patent exists.

Numbers of patent applications in the US recent years (highlighting added):

You can read all the transactions with the Patent Office on Public PAIR, all the times the patent application was rejected and appealed.
https://portal.uspto.gov/pair/PublicPair
Select Patent Number, and enter US10144532 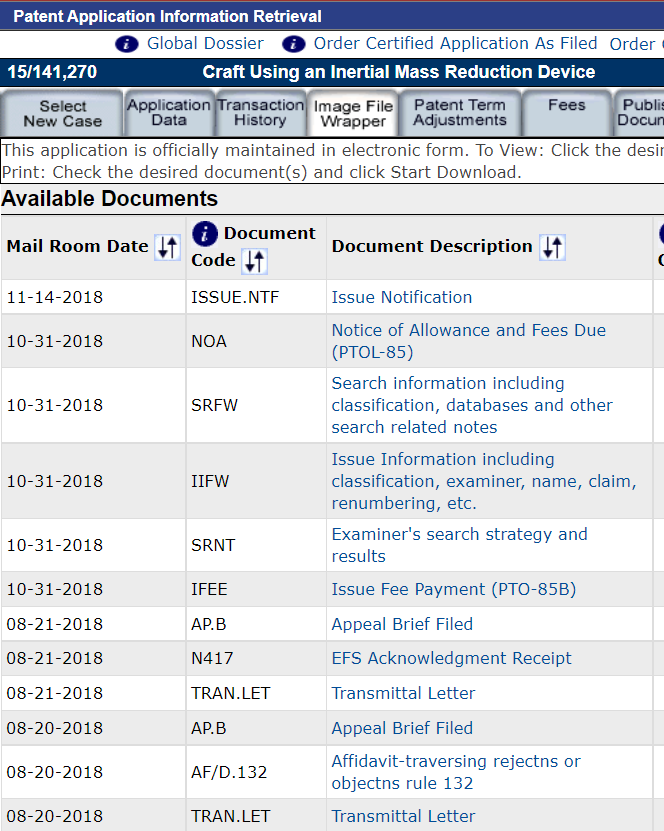 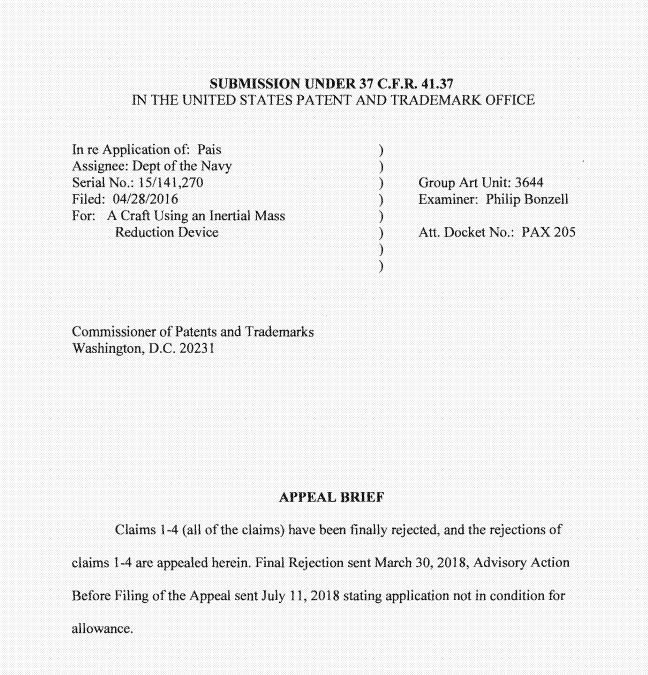 When the patent references work by Harold Puthoff, it's not exactly standing on solid ground.

flarkey said:
This reports on some of the experiments that were don on the back of this patent.

This guy's word salad comes around in the "future science" media roughly every year, it seems. I speculate that might be because reactionless EM drives are becoming more of a topic generally, what with the QI (quantised inertia) guy, an actual research physicist, jumping on that bandwagon. I spotted it in ~Feb this year, which was the last media blast, and followed a very similar route to you, reaching 2020 where I encountered this:

According to Willis, Dr. Pais's most recent work represents "a classic case of pathological science." Willis says the literature for the plasma compression fusion device contains invented jargon, nonsensical statements, weak or absent evidence of an informed theoretical basis, an "overabundance of nebulous adjectives and adverbs instead of meaningful quantities in technical writing," and "lots of statements made in passing that seem to contradict basic and accepted physics."

Willis says that Dr. Pais "references subjects that have consistently been plagued with pathological science and popular misunderstanding for decades, such as vacuum energy. It's hard not to suspect he's either drinking the kool-aid himself, or just chumming the waters for the kind of people who do."

It looked like word salad to me - it looks like word salad to those better educated in the field than me - I drew the obvious, and final, conclusion. I will need to see results in order to change my mind, not just more meaningless diagrams.

I think I also made the mistake of reading a paper on his work, and I'm pretty sure I spotted an actual mistake in it, one of his equations, basically one of the laws of physics, was wrong. That might have been a different "scientist", though, but it was about the same time, and regarding the same type of tech. That was quite a successful debunk. A chat forum was constantly being plagued by almost daily CT "now this proves it!" (it=covid/vax, aliens, FTL, you know the script) posts. I think me shredding that paper was the thing that finally made him reaslise that we were not a receptive audience, and we've not seen him since.

Agent K said:
You can read all the transactions with the Patent Office on Public PAIR, all the times the patent application was rejected and appealed.
https://portal.uspto.gov/pair/PublicPair
Select Patent Number, and enter US10144532
Click to expand... 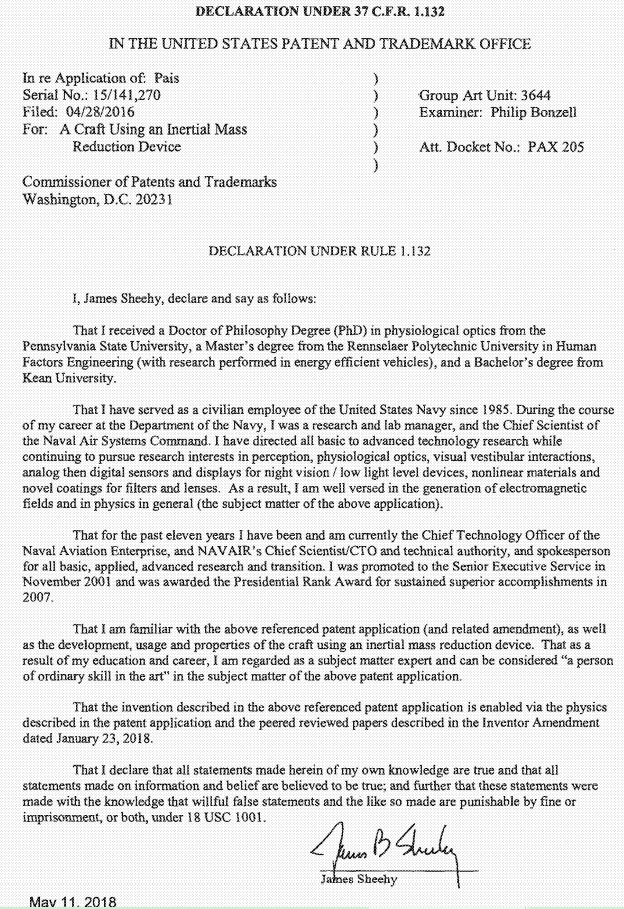 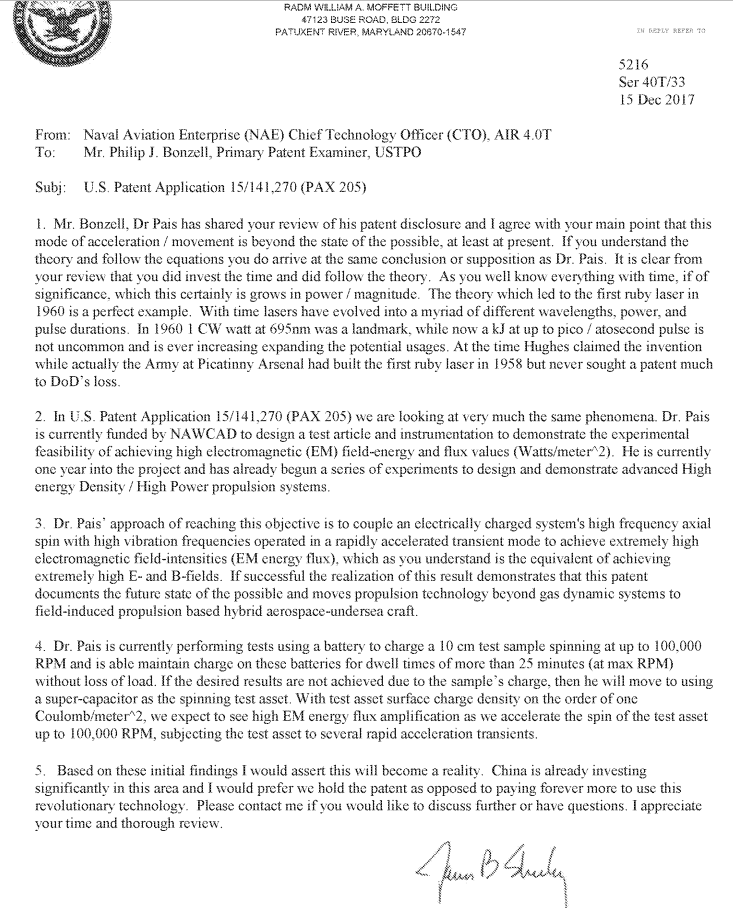