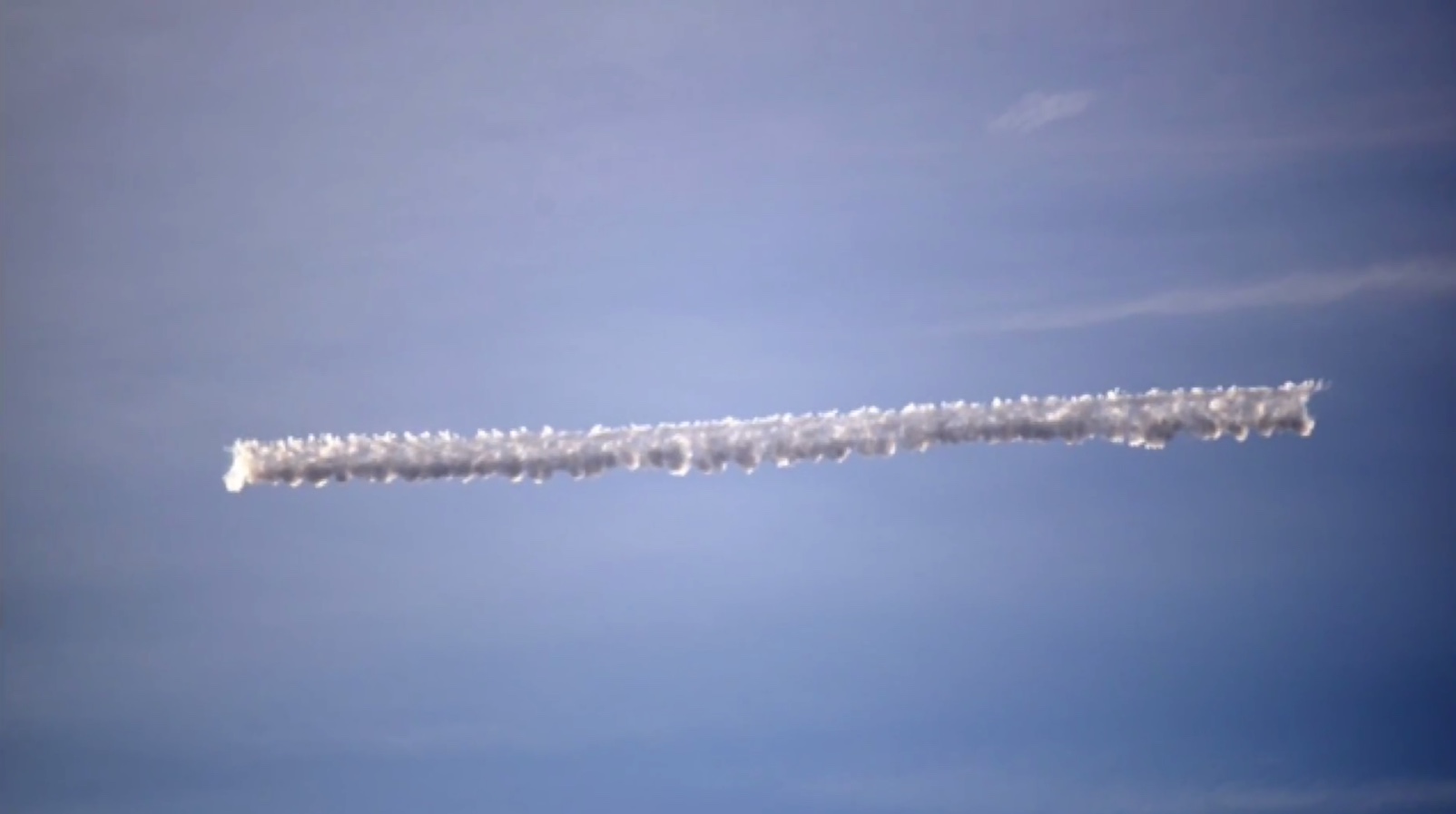 It's a white, fluffy formation that could have been emitted from the back of an aircraft, though not like any aircraft that's been made public. So, what is it? And is it connected to all those other puffy lines we see in our skies?

"Just out here, about half-way across the pond," said Malcolm Harris.

On a clear day in December, Alamo resident and amateur photographer Malcolm Harris stopped to capture images of ducks sitting in water just off highway 93. He spotted something else in the sky above the field.

"It was long, puffs of smoke," Harris said. "It looked like a rope, kind of like there was a solid rope on top, then little puffs of smoke underneath it. I would say definitely it was manmade, it wasn't anything natural."

Harris, the son of a longtime Las Vegas newsman, ran some calculations based on his lens angle and estimates the odd cloud was about a mile distant and perhaps 500 yards long, but it was dense, like puffs of exhaust that had been crammed together.

"You could see the very beginning and the end and it was very clean and it stood by itself. There wasn't anything else around it. I've seen clouds being made out here in the desert. All of a sudden you see a cloud being made, and that is not what was going on," Harris said.

He didn't hear anything, so whatever formed the cloud was quiet.

This is a very odd looking trail. Physically it looks like a contrail, however it has an unusually stark contrast with the background, and it is very abruptly terminated at each end.

The contrast can, I think, be explained as a combination of lucky back-lighting, and some post processing contrast enhancement. Adjusting it for a more naturalistic look, and it looks a lot more like a contrail: 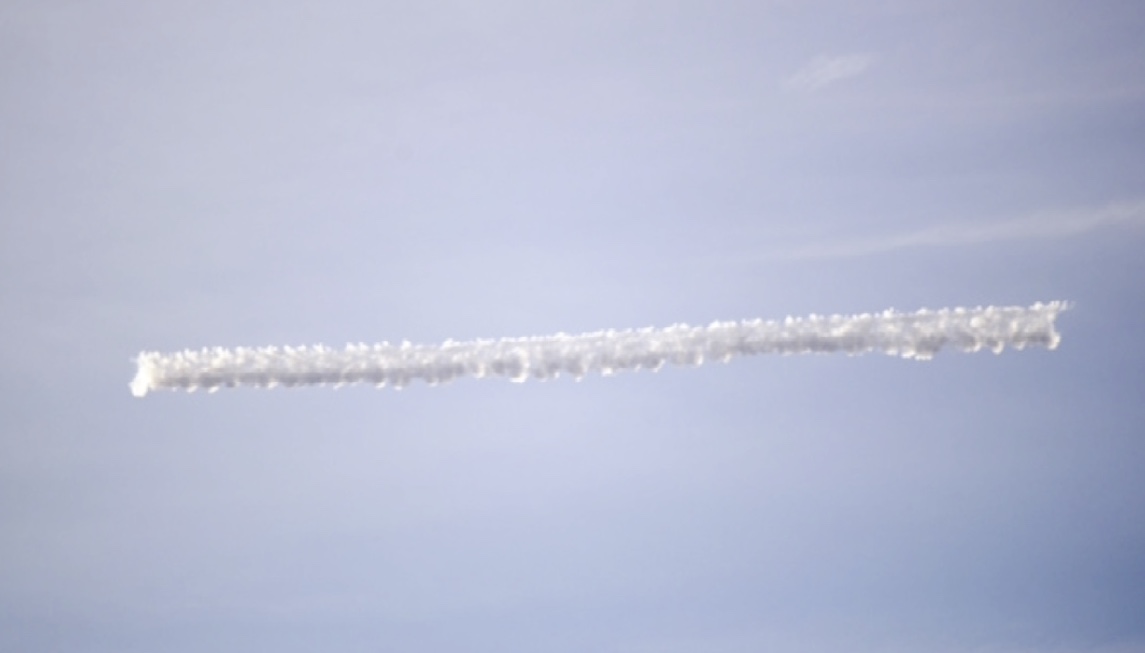 Here's a photo I took today, waiting until the contrails was backlit by the sun, to show how you can get quite stark contrast:

But the KLAS photo is still very strange. Could it be some kind of military jet doing a brief burt of power? Is it smoke? Is it fake?
Last edited: Feb 11, 2015

Staff member
I've been specifically looking for similar trails today. I took one photo of the trail of a 777 flying overhead, at about one minute old, and the shape of the trails roughly matches (ignoring the cut-offs)

Staff member
Another shot of the 777 trail, rotated 180 degrees to match the direction of the crow instability (which can go left or right). The crow instability has the effect of making the pendules on one side larger and more spaced than on the other.

I'm curious if he had more than one shot of it. On the video, when they zoom out to show his angle of view, it says it's super imposed. 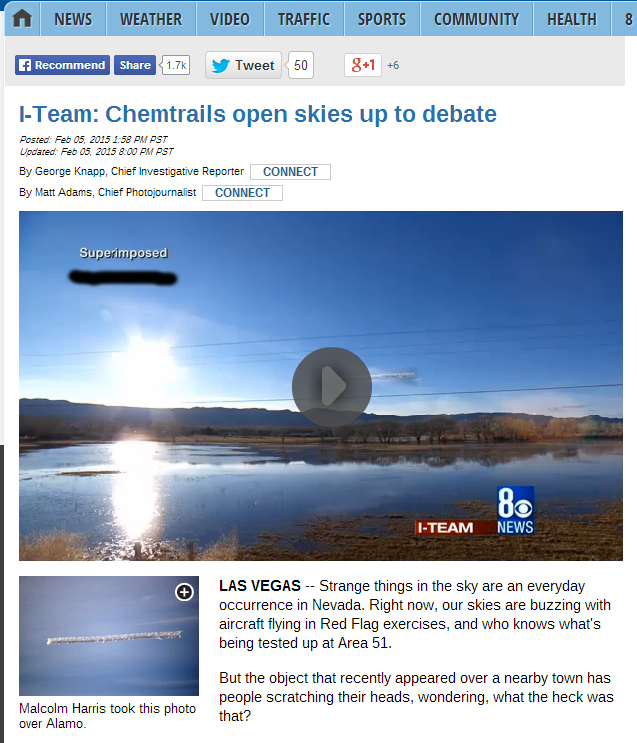 When I take photos of something I want to analyze or identify later, I'll take multiple shots and angles so I'm not relying on memory. I'm not very good at identifying photoshop unless a google search finds the original. Is there any evidence this could be a longer trail that was shopped?

I did find an email address on a photo attributed to the same name as in the story on a tourist site for the Las Vegas area that was about 2 years old. On the 6th I sent him an email requesting if he had more shots. So far, I've received no reply. 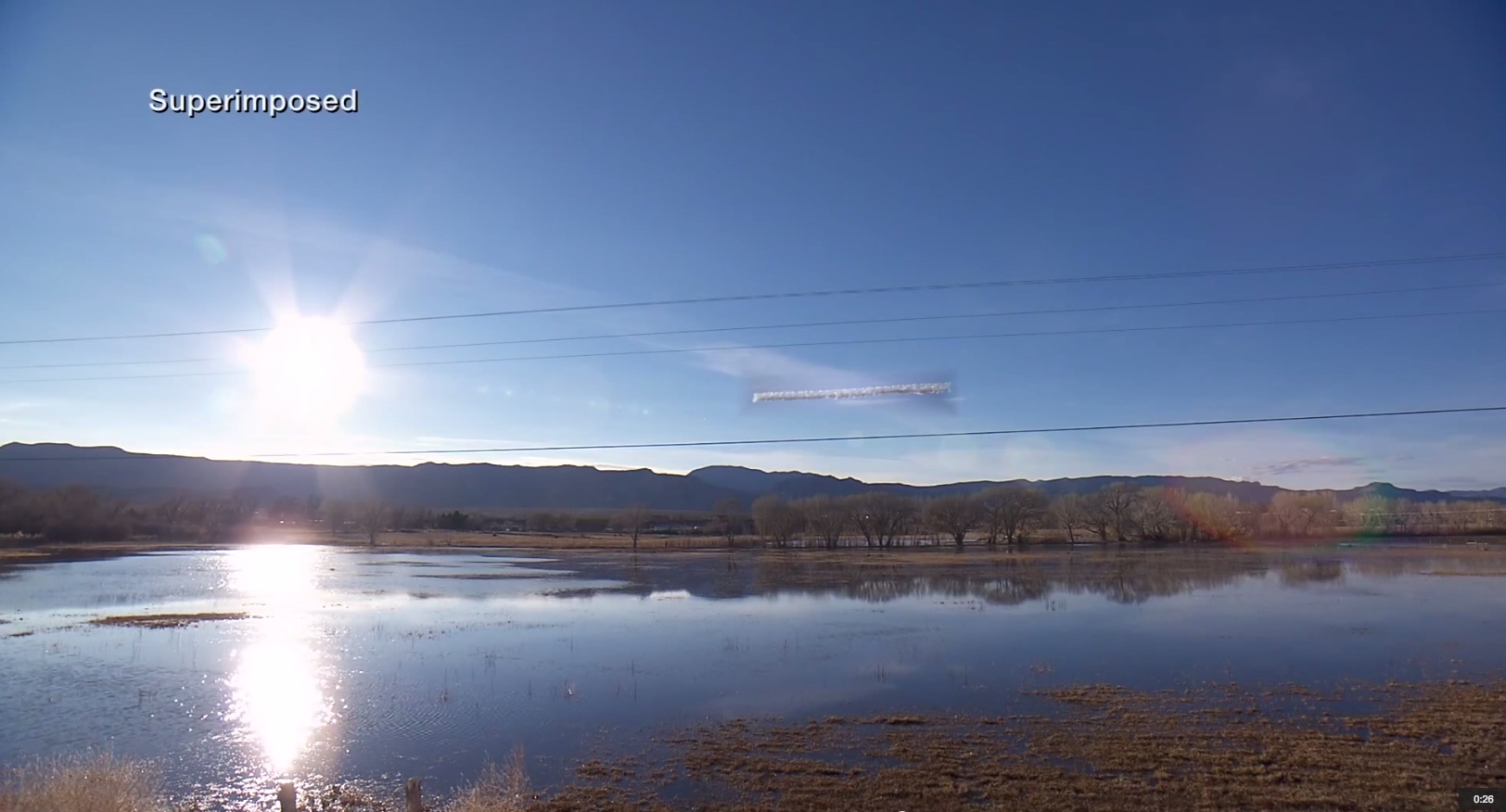 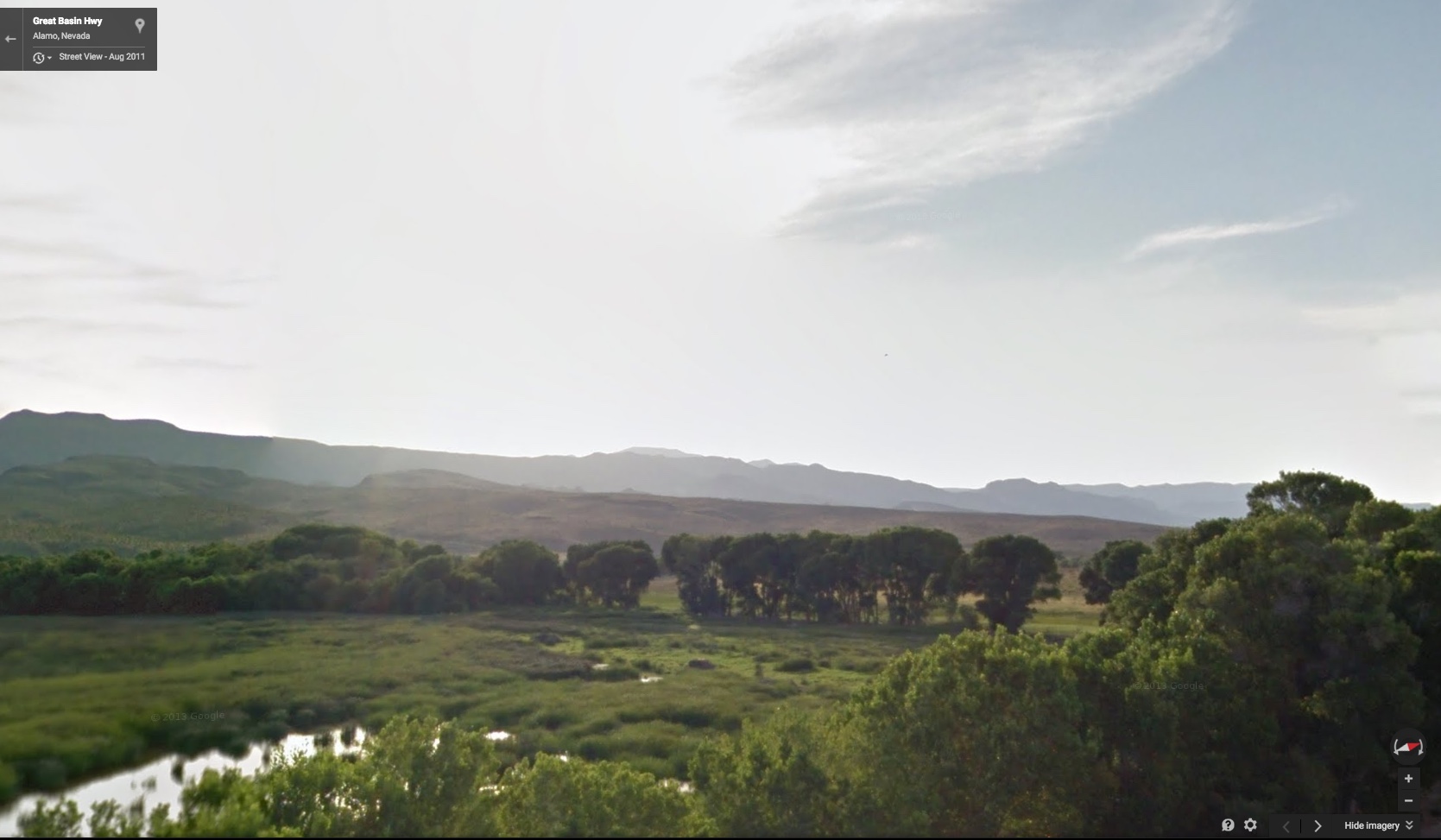 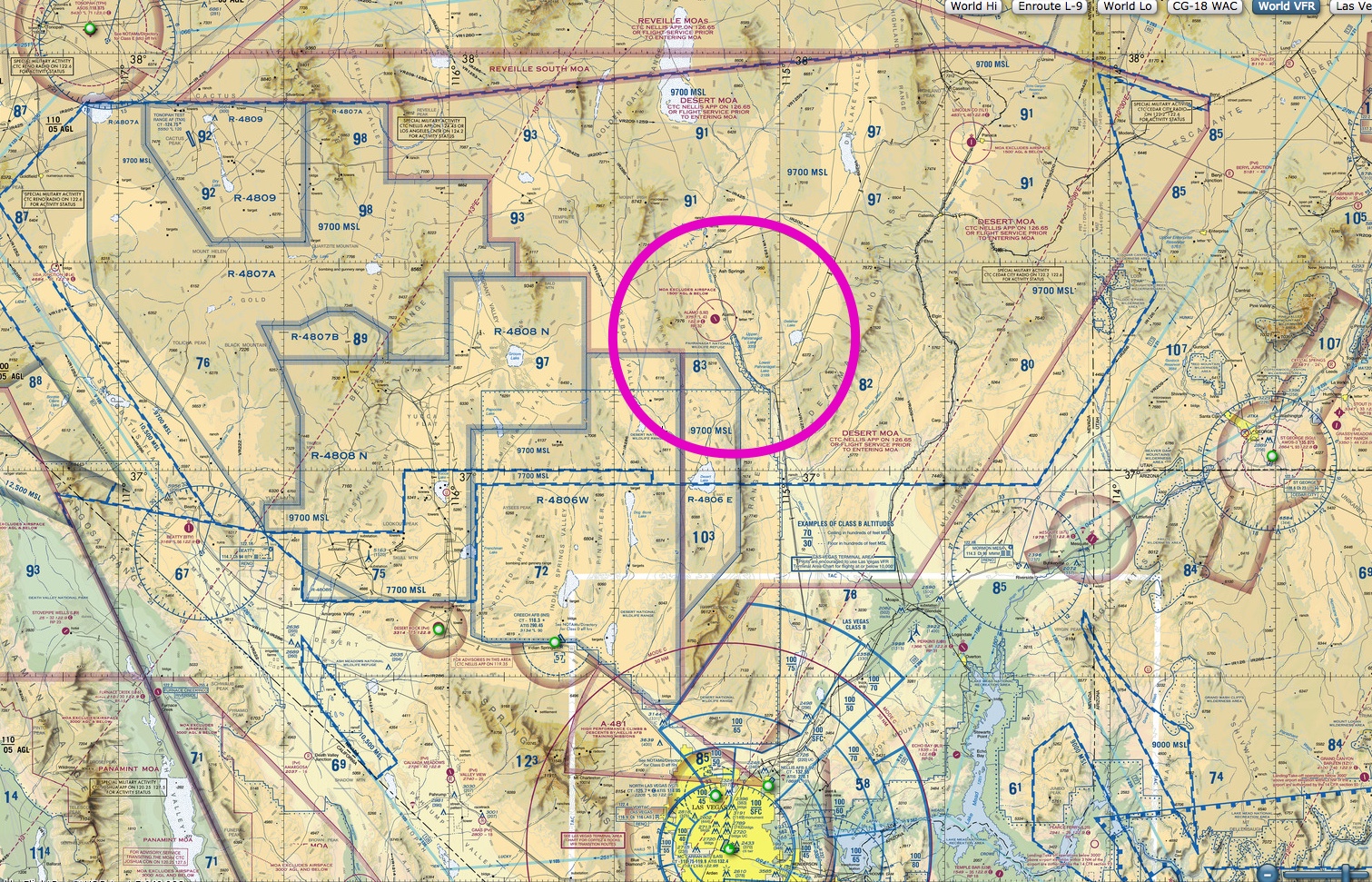