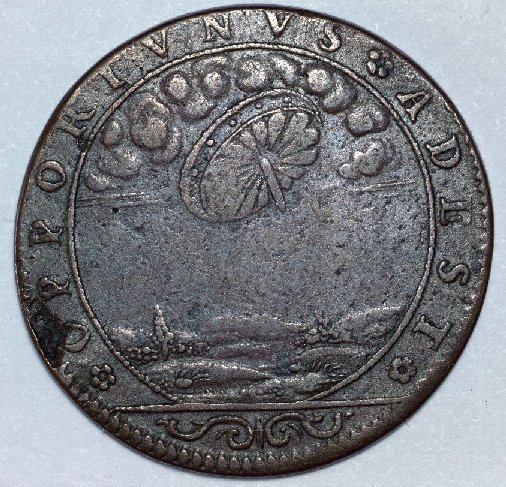 This is actually a Jeton.

Jetonsweretokenorcoin-like medals produced across Europe from the 13th through the 17th centuries. They were produced as counters for use in calculation on a lined board similar to anabacus. They also found use as a money substitute in games, similar to modern casino chips orpoker chips. Thousands of different jetons exist, mostly of religious and educational designs, as well as portraits, these most resembling coinage. (The spelling "jeton" is from the French; the English spell it "jetton".)
http://en.wikipedia.org/wiki/Jeton

In the 16th century, jetons were mostly used to propagate political messages and to glorify the deeds of the ruler. There was such a great need to make propaganda through jetons that they continued to be struck long after jetons ceased to be used as counters. In France and in the Netherlands this new image of the jeton began about the end of the 16th century. The jeton became a small commemorative medal only suitable as a collectors item. The development in Germany was slightly different. In the course of the 17th century the counters became smaller and smaller, for little by little they were only used as chips for card-playing. Real jetons are metallic thin flat discs and are struck like coins. The differences from coins are: the metal is generally copper or brass and seldom silver. Gold jetons are very rare. The measure is always between ca. 20 mm and ca. 28 mm. Smaller or larger pieces cannot be used as reckoning counters. The relief is always low for easy pushing and making piles. (In France the jetons were mostly laid down overlapping, as shown in the figure). Jetons are not coins, so they never have an indication of value. http://www.chicagocoinclub.org/projects/PiN/juh.html


There are several theories as to what the picture on this jeton signifies:

The other side of a jeton with the same "ufo" picture reads something like " cam [h] ira computorum niustrie" (?)
Niustr means "unjust". and computorum means "accounts".

this book explains it as

The Coin of Burgundy, 1648, was found twice this year , one by Mr. Bijon , High Street , and the other by a resident of the suburb of Lyon. This token carries the legend of : Resistit paucis , obruitur pluribus . Burgundy has resisted so far, she succumbs now .

This token opposition testifies to the province government of then. The foolish war , called the Fronde was beginning to Paris , the country was in turmoil, and Burgundy was not far form themselves into independent state , has what can conjectuer by the shield of this token that is not torn as formerly from France and Burgundy. The lilies are gone and the old coat of arms left alone . Conde , winner of Recroy and appoint, at the beginning of triennalite , governor of Burgundy, avail Vincennes has been locked by order of the Court. The exaltation of Burgundy slingers was such that said Mr. Rossignol in Beaune , following a banquet , slingers mingled their blood Burgundy wine and swore , by dipping the tips of their swords , to die to defend the hero of Recroy .

You see, gentlemen, that our fathers did not show themselves indifferent to diverces scenes of civil and political life of their era . Octagon token with the motto colligit and elaborat .

Here are some other 'coins' of france with similar picture styles. (personally i think it's a "crown flower shield sent from Heaven" : )

In the first coin pic the man holds a shield.

Commemorating the defeat of the Burgundian forces aligned with the Fronde in opposition to the absolute power of the monarch. The oath of fidelity quotes the words of the first president and the bishop of Autun at the time of the opening of the Chamber in 1651. http://www.coinpeople.com/index.php/topic/10572-french-jetons/ 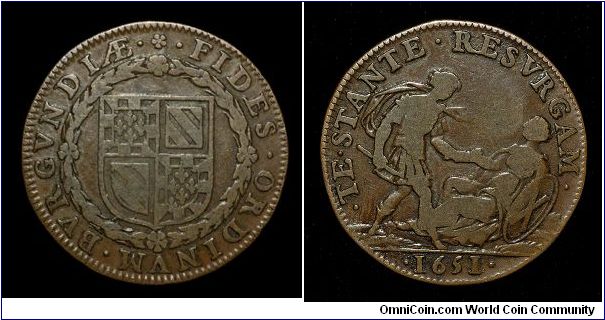 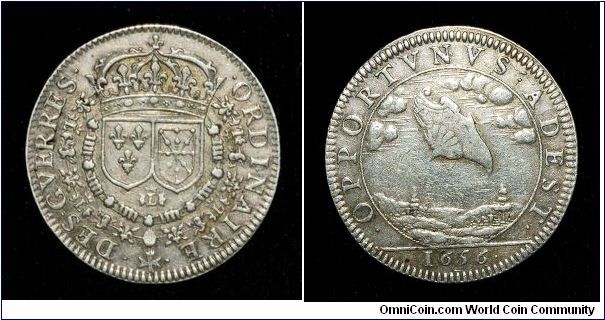 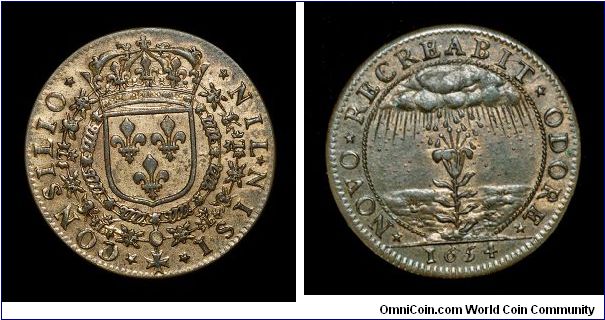 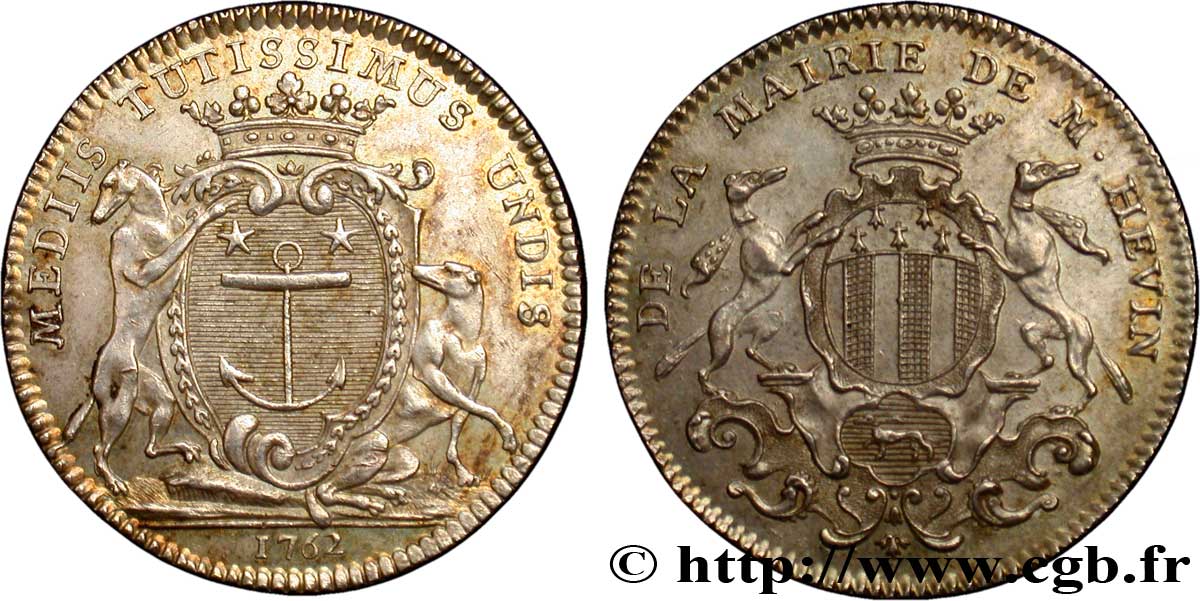 another source which shows/pictures both coins below and their connection to the Fronde civil war.

Nothing was done changed for twenty -five years since cinquaint , for over a century ; because, up until Francois I, is only found on the battlefields.

it is rare that the storm is not preceded with dust swirls . The riot of Higgins had been announced by cries and complaints, as summarized camel token : oneri impar . The Fronde had its precursor sign in the helpless and the obruimur shield token foregoing . notice , of ELSEWHERE , that weapons of Burgundy are truncated ; the shield is not quartered ; the lily were rejected , leaving only the old coat of arms. Do not you say that the province will separate the king ?

Then theres a bunch of other 'military/political' stuff about the war I'm not interested in. But basically sums up with them printing ("struck") this coin following the conflict. 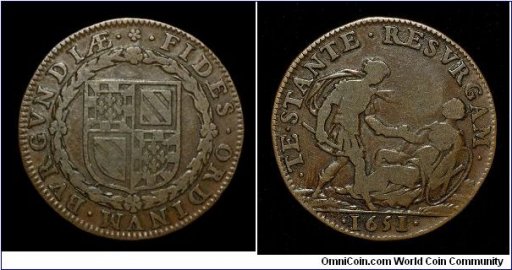 "the states struck the token following" [the conflict commemorated]

I should have said "Absolutely Fabulous" ... but not sure how many will "get" it....

I would even be tempted to say of the second coin "This wheels's on fire" but even less people would get that.
W

I would content that the first jeton reads "CAMERA COMPUTORUM NEUSTRIAE", the "Chamber of Accounts of Neustria" perhaps? or the Bank of Neustria? I found at least one accepted meaning for computus is "bank account" so is it reasonable to assume a camera computorum could be an ancient form of bank? and doesn't Opportunus Adest, "Opportunity is here" sound just like a bank slogan?

"NEUSTRIA, the old name given to the western kingdom of the Franks[...]gradually the term Neustria came to be restricted to the district which was later called Normandy"
Click to expand...

"In the year 1663, the Père de Moustier gave to his work on the churches and abbeys of Normandy the title of Neustria pia."
Click to expand...

so the term isn't unheard of in the 17th century.

That unfortunately does not have much to do with the wheel imagery, I wonder if a single travelling artisan designed those two coins, a decade apart?

Fascinatingly, there are other examples of the word "camera computorum" online, but I did not find an actual translation.

Wikipedia reveals that the Aerarii were a class of Roman citizens comprised of conquered peoples as well as degraded and branded citizens, so we have that term now attached to a community of people of the same social class that had special taxes levied on them, needing some form of accounting to keep track I suppose.

Roman Empire falls, Latin lives on in religion and government institutions and a thousand years later we get
french jetons with the same inscription, another example is "camera computorum regiorum" (regiorum meaning royal). This probably refers to an ancient function related to accounting that isn't currently widely discussed on the internet. I'm sure a scholar could tell us...

Then again, doesn't explain the wheels.

That coin there, which reads "Resistit paucis obruitur pluribus" is interesting also because itcan be looked at as a shield protecting agains't a volley of arrows, but rotate the coin upside down: 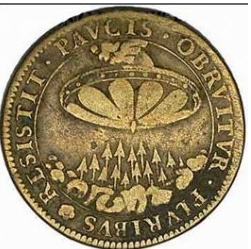 Now we see something flying amidst the clouds (or accompanied by an angel?) hovering above the seas and the drylands. Also note that in this orientation, it is now similar to the other 1656 coin, with the point of the shield oriented downwards.

I think the burgundy jeton is meant to be looked at in both orientation and carry a double meaning, but who knows what they were thinking.

It could be that at least some of these jetons were made for use by accounting firms or banks of the day, and so mystic semi-creepy imagery is not out of the question.