Staff member
Hundreds of homes destroyed or threaten in Ventura, 100 miles Northwest of Los Angeles in the Thomas Fire. Winds (dry, from the northeast)) sustained at 30-40 mph over the region means it's going to get worse. It's growing at about an acre per second.


An extremely critical fire weather area is in place for parts of
Ventura, Los Angeles, Orange, San Bernardino, and Riverside counties
in southern CA for today. This is a continuation and expansion of
the extremely critical area that was valid yesterday (Monday).
Across these areas, sustained winds of 30-40 mph will continue
through at least this evening while the surface pressure gradient is
maximized. Stronger gusts of 60-80 mph will likely occur in the
higher terrain of these counties given enhanced northeasterly
low-level flow that will remain present. These very strong downslope
winds will act to warm/dry the low levels, and coupled with diurnal
heating, RH values will likely fall into the 4-10% range for much of
the day. Fuels will also remain very dry and receptive to large fire
starts and extreme fire spread given the expected/ongoing
meteorological conditions.

This is Metabunk related as a new type of conspiracy theory sprang up with the Napa fires - that they were caused by DEWs (Directed Energy Weapons) shot from space. However the reasons for this fire are mostly weather related. High winds, low humidity, lots of fuel from the rains last season, no recent rain. So there's no need to invoke magical causes. It is likely that people still will, so I think it's important to note the real reasons for the fires. 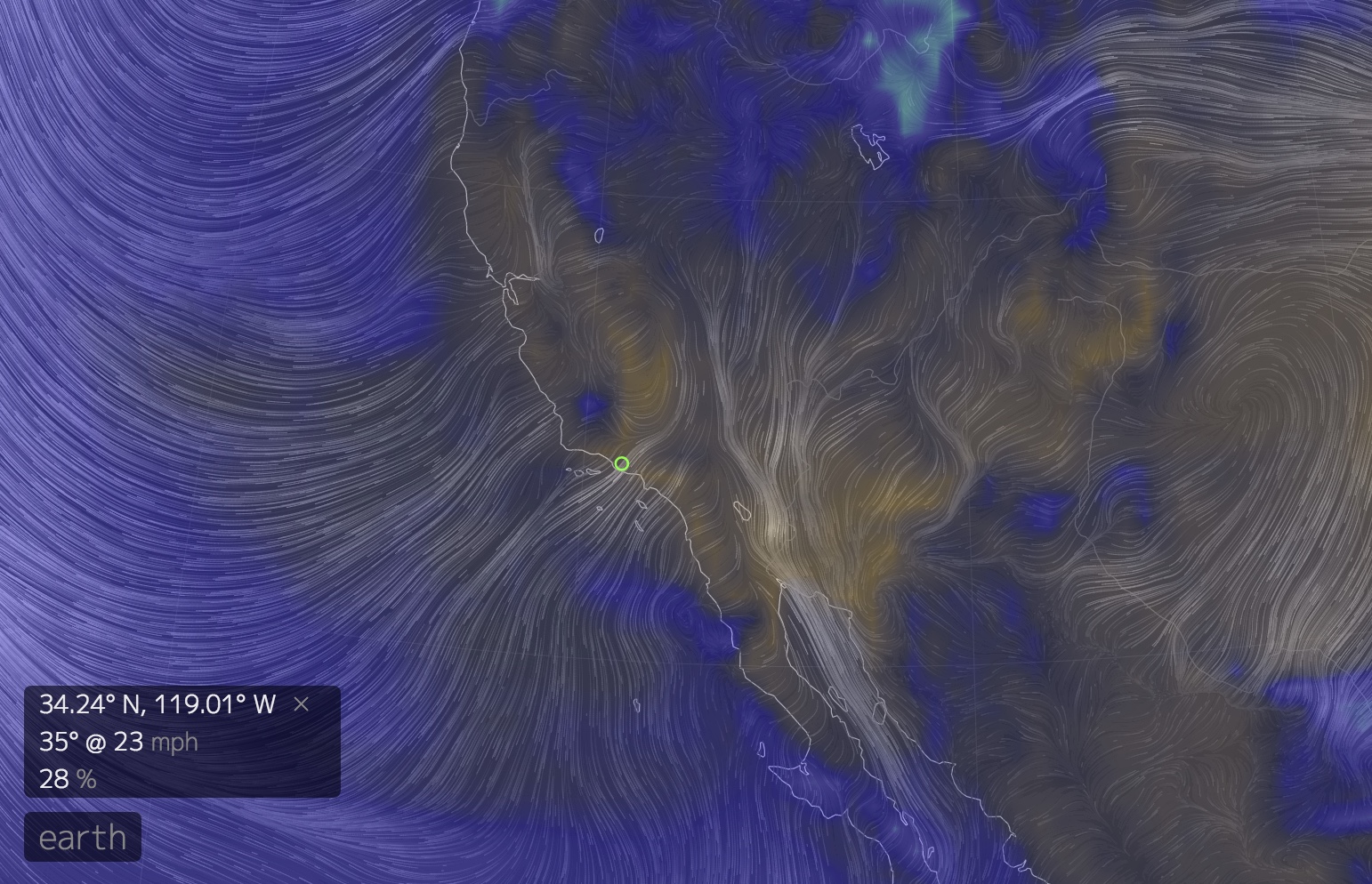 Winds are forecast to get stronger through the afternoon. Minor improvement tomorrow, then high winds again on Thursday will make the fires near impossible to control. 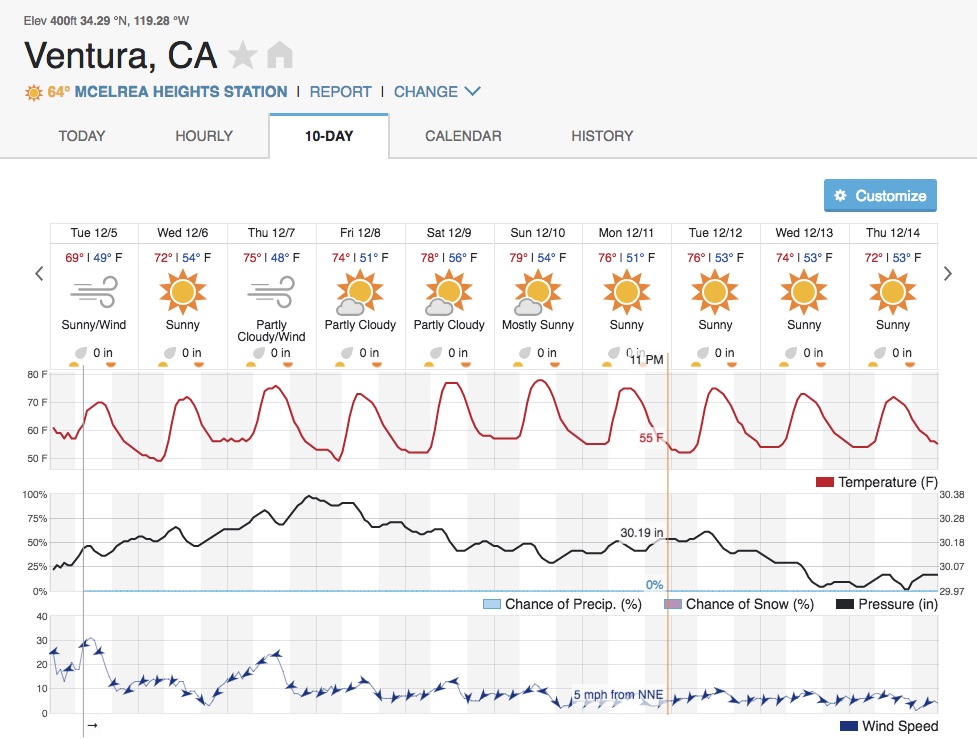 Staff member
Fire danger conditions are over a wide area. Other fires are happening, and more are very possible. There's the 4,000 acre Creek fire, closer to LA 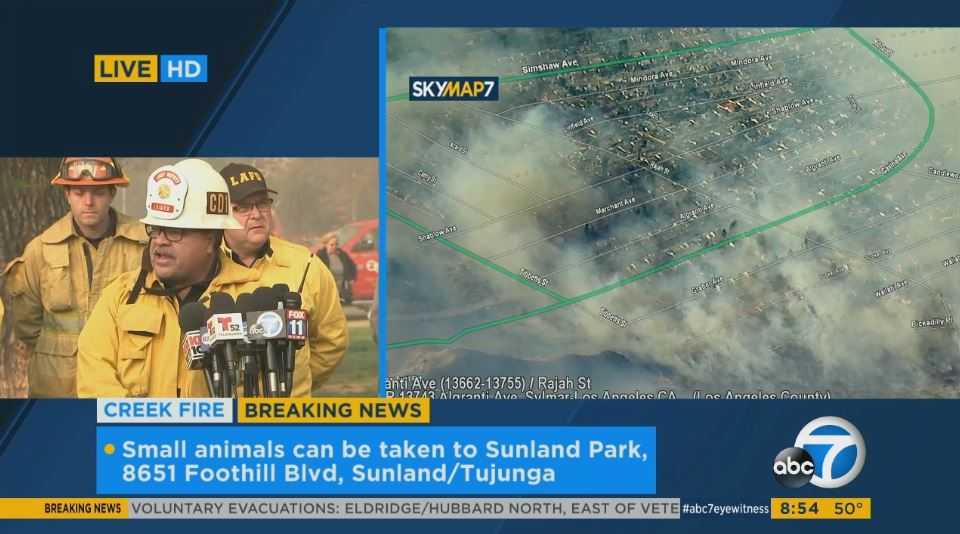 And now The Rye Fire, 500 acres north of Los Angeles near 6 Flags Magic Mountain. It's going to be a long next few days for the firemen. 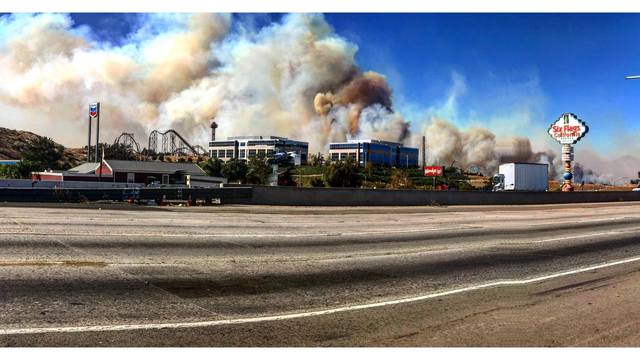 The I-5 Freeway in Santa Clarita is shut down as crews battle the Rye Fire burning in Santa Clarita. The fire began shortly before 9:30 a.m. in the 25000 block of Rye Canyon Loop, according to the the Los Angeles County Fire Department. 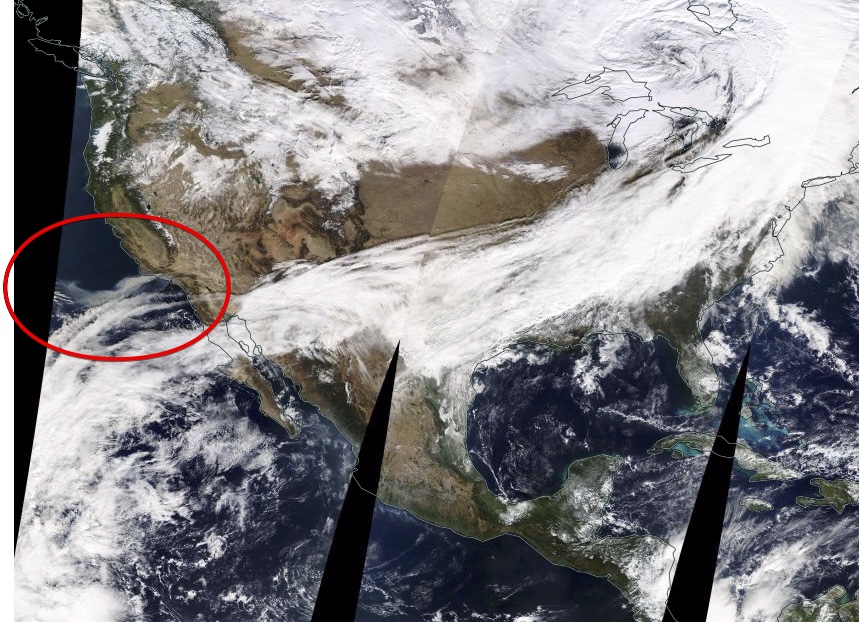 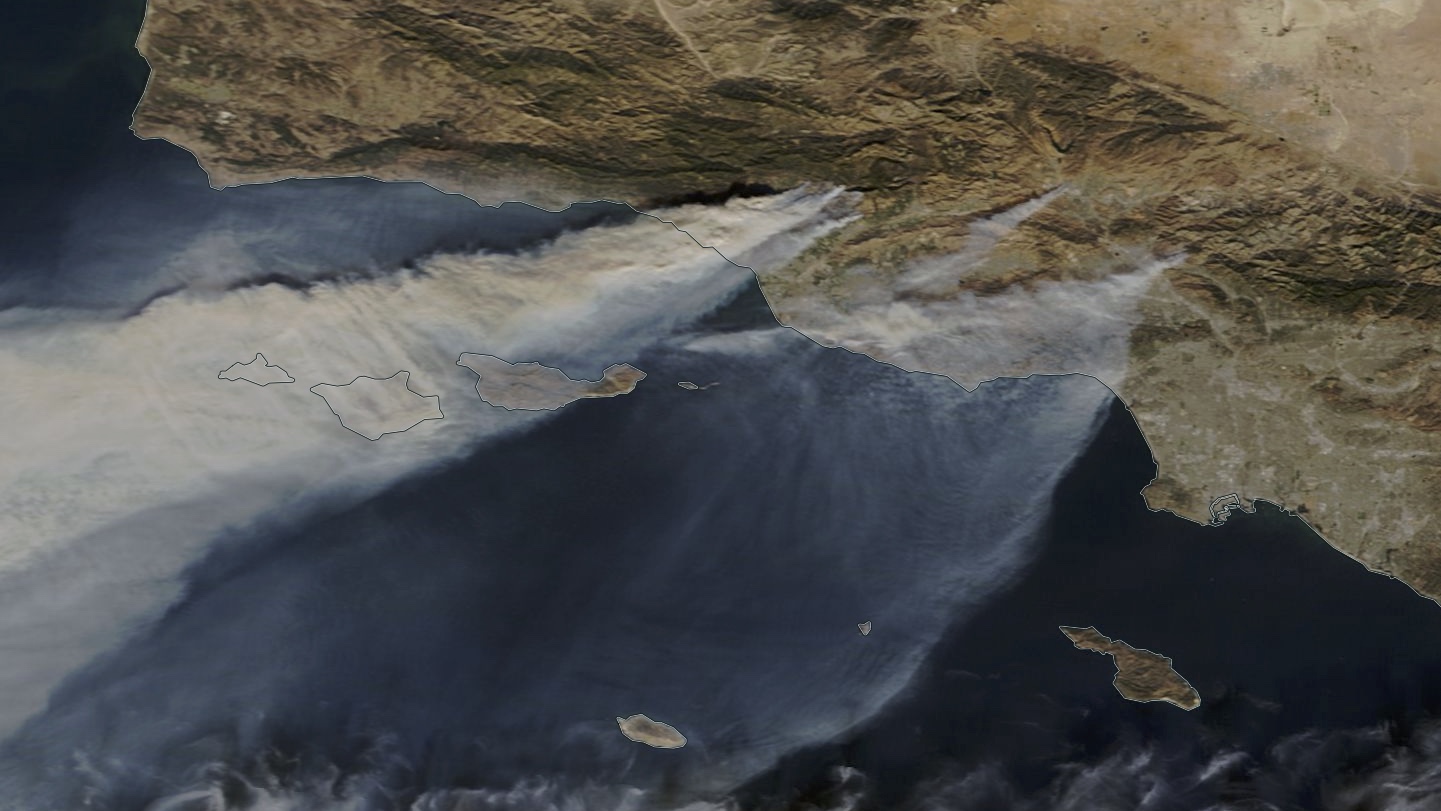 (repeating similar information, but from a (another) native to the fire area, and personal experience)

I've been in SoCal my whole life. Every couple of years or-so we get wildfires.
Most of our fires come in July, August, Sept, the hottest (and driest) time of the year. These fires become out-of-control because the dry Santa Ana winds that also show-up during this time.

December this year was "late" for a dry Santa Ana event, but the fire susceptibility for this year was in place since July.....we just didn't have winds until December, and no rain so far this season.

All Cal Fire (and all other) officials were warning us that this year could/would be particularly dangerous. This was due to large rainfall the previous rainy season that spurred large abundant growth of native and invasive weeds, brush, and annual grasses. These fire hazards became tinder-dry, as they had all summer to dry-out, with no rain.
If the annual winds had come in August, then we'd see fires in August.
This year, winds did not happen until Dec., but the danger was still in place.
Add to the Dec winds..... extremely low humidity. (5-15%)

Even though the winds have since subsided, the low humidity has not.and the brush and forest in the Thomas area fire swath, has not burned in 50 years.

If you look at the history of California fires, you will see many such large fire events, and nearly all of them were during this period of dry Santa Ana winds. It's devastating, but somewhat predictable.
LINK, wikipedia 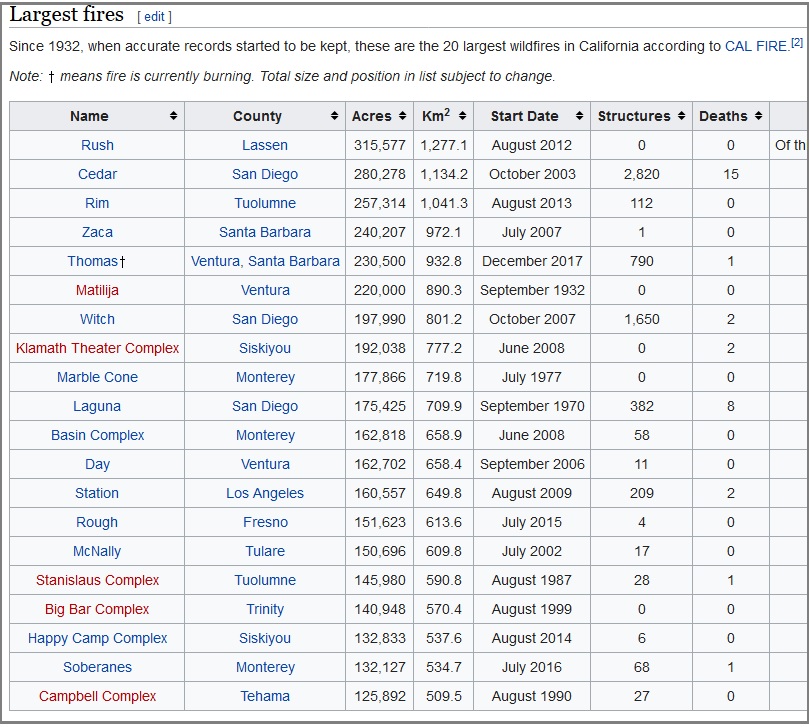 It's important to note the similarities in past fires, because there are so many.

1961 Bel Air fire, dry Santa Ana winds took almost 500 homes.
After that fire, wood-shake roofing was said to lend a hand to the loss of homes, as well as to the (now extended) brush cut-back brush clearance around homes.
(longish video, but advanced a bit in time, here...)

Mick West said:
This is Metabunk related as a new type of conspiracy theory sprang up with the Napa fires - that they were caused by DEWs (Directed Energy Weapons) shot from space. However the reasons for this fire are mostly weather related. High winds, low humidity, lots of fuel from the rains last season, no recent rain. So there's no need to invoke magical causes.
Click to expand...

So true.
There's that special segment of people who try to equate any news event to gov't deception.

It's like a "Where's Waldo" game to find evil gov't deeds. Even when Waldo is not found, he is found, by suspicion and invention.

What can be done about this game ? Maybe nothing.....it may have to be played-out until the suspicions fail to materialize..... or until boredom sets-in. But this can take years.
You must log in or register to reply here.