I took the above photo today. It shows some Cumulus mediocris clouds. Medium sized cumulus. There are some people who think that these small fluffy clouds are the only type of "real" clouds that exists, and that high clouds such as cirrus or odd looking clouds like mammatus are evidence of some kind of global plot to modify the climate. Less extreme, but still overly suspicious, folk think that there are new clouds that exist in addition to the ten they were taught at school.

This suspicious was no doubt compounded when the World Meteorological Organization announced last week that the International Cloud Atlas was being modified to include eleven new latin classifications of existing cloud types. Unfortunately the popular press tended to report this as "eleven new clouds added!"

The new classifications are all clouds that already had some kind of common name, but lacked a way of fitting into the Latin classification scheme. For example the cloud that sometimes forms over a waterfall (or a dam spillway) would have been referred to as a "waterfall cloud", a "mist cloud", or a "spray cloud". But now it's got a latin term: Cataractagenitus (literally: "made by a cataract") 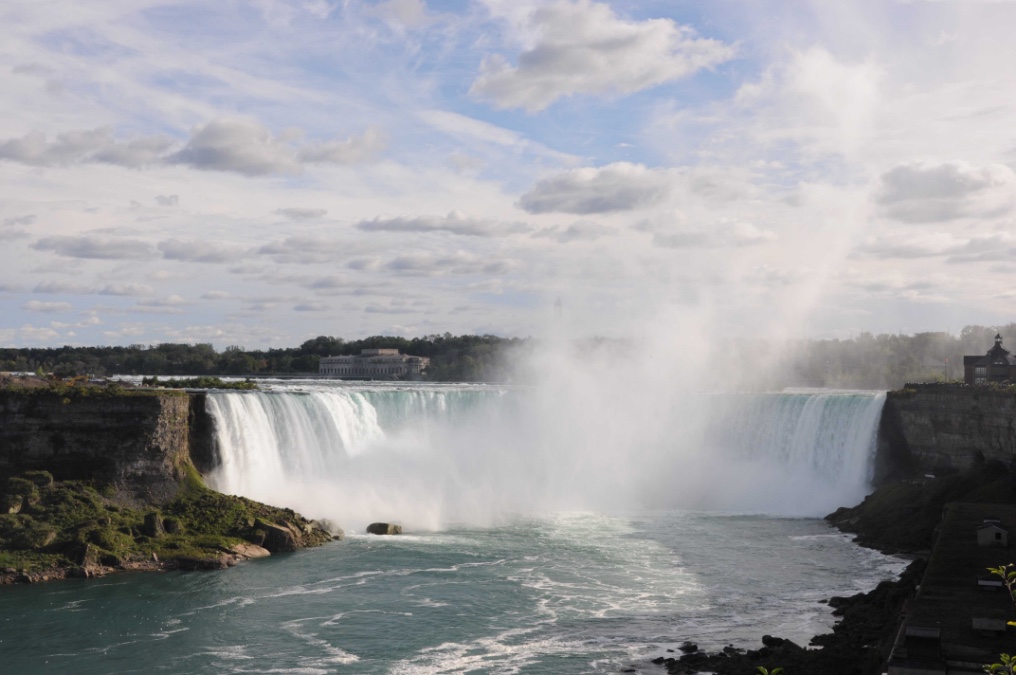 The little description above gives a clue as to how the classification scheme works, and why people are confused. You quite often hear chemtrail conspiracy theorists say things like: "when I was young there were only ten types of cloud". Well, the good news for them is that there still are only ten types: Cumulonimbus, Cumulus, Stratocumulus, Stratus, Nimbostratus, Altostratus, Altocumulus, Cirrostratus, Cirrocumulus, and Cirrus.

How then do clouds like Cataractagenitus fit in? What about the other ten (Asperitas, Fluctus, Cavum, Murus, Cauda, Flumen, Flammagenitus, Homogenitus, Homomutatus, and Silvagenitus)? The answer requires that you understand the basics of cloud classification.

The ten "types" I listed are actually the ten genera - the highest level of cloud classification:
https://www.wmocloudatlas.org/clouds-definitions.html

(You could say "Low", "Middle", and "High" are actually higher level classifications, but they are more like handy groupings).

Cloud Genera are in turn divided up into Species, which in turn are subdivided by Variety which in addition can be modified by "supplemental features" or "accessory clouds". Take Stratocumulus for example:
https://www.wmocloudatlas.org/cloud-classification-summary.html

The main type, the Genera, remains unchanged. There is one new Species of Stratocumulus, the volutus - which is simply the latin name for a roll cloud - a type of cloud that might have gotten overlooked due to its rarity in Europe. There are no new Stratocumulus varieties, but there's a new supplementary feature: cavum, which is just the latin word for "hollow" and is just what we currently refer to as a fallstreak hole: 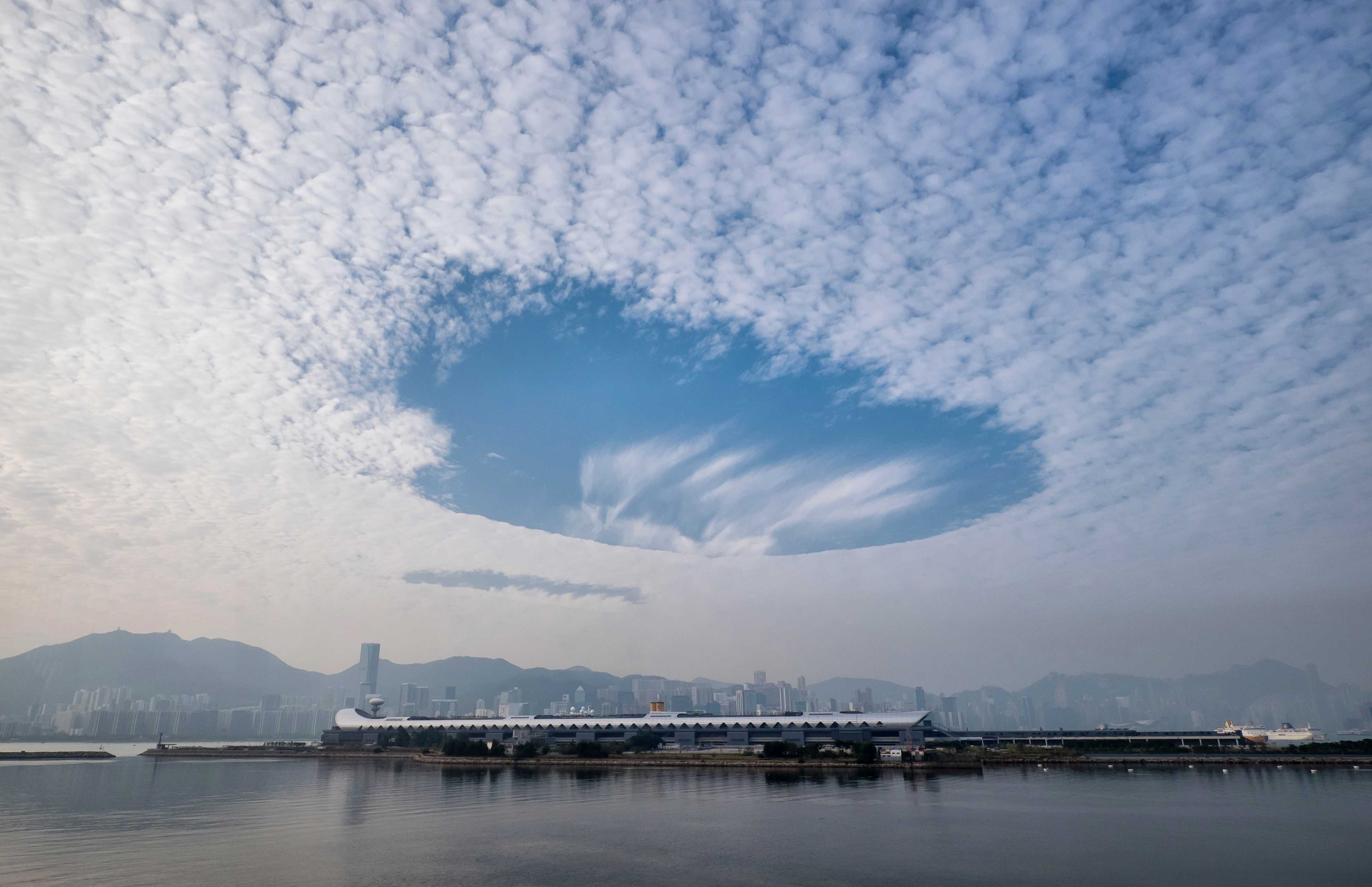 A well-defined generally circular (sometimes linear) hole in a thin layer of supercooled water droplet cloud. Virga or wisps of Cirrus typically fall from the central part of the hole, which generally grows larger with time. Cavum is typically a circular feature when viewed from directly beneath, but may appear oval shaped when viewed from a distance. When resulting directly from the interaction of an aircraft with the cloud, it is generally linear (in the form of a dissipation trail). Virga typically falls from the progressively widening dissipation trail. Occurs in Altocumulus and Cirrocumulus and rarely Stratocumulus.


Here's a chart showing all the changes:
https://www.wmocloudatlas.org/cloud-classification-summary.html 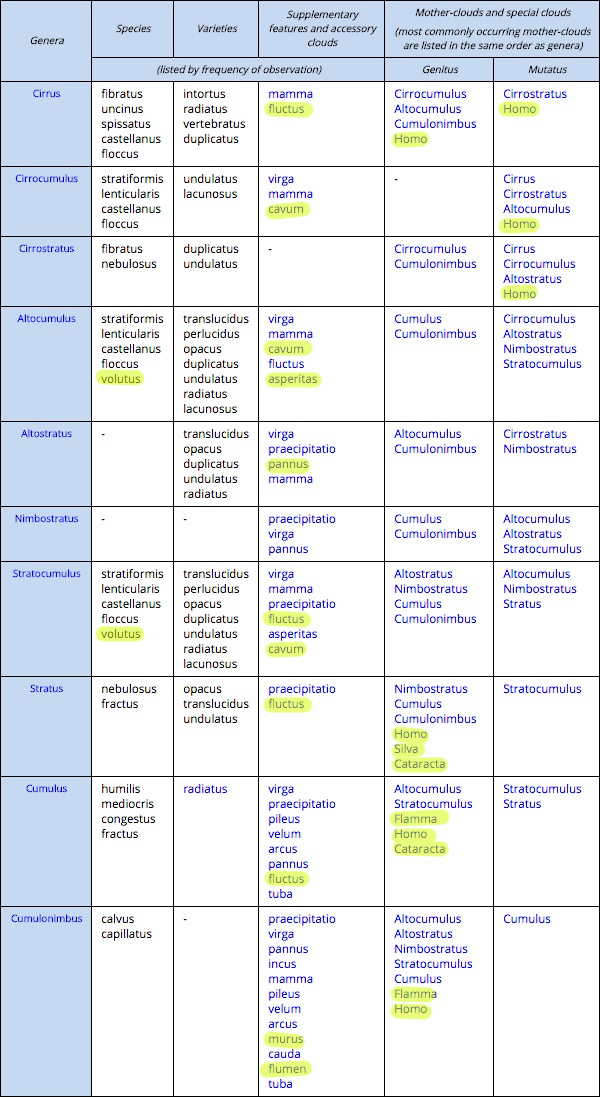 The last two columns, Genitus and Mutatus are perhaps going to be of most interest to the believer in covert geoengineering. Here we find the rather ominous sounding Homogenitus and Homomutatus.

So what of the scariest "new" cloud types, Homomutatus and Homogenitus All "homeogenitus" is is a new latin term we can add to a name of a cloud to indicate it has a man-made origin. For example the Cumulus mediocris clouds from my top image also sometimes form from the steam emitted by power stations, so we can tag them as man-made, or homogenitus:
https://www.wmocloudatlas.org/homogenitus.html 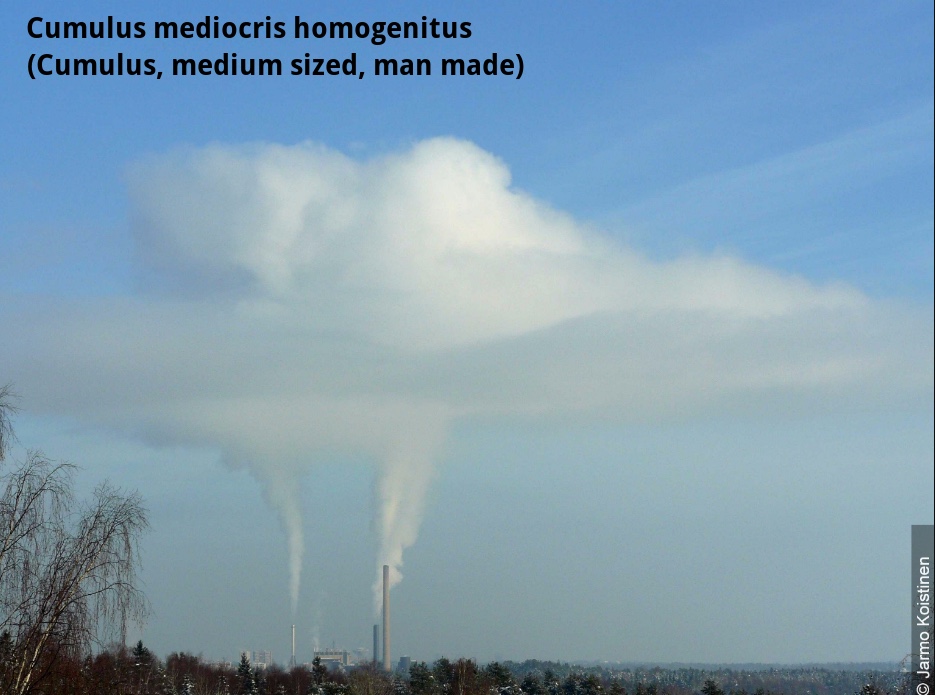 The more commonly observed man-made cloud is a cirrus cloud, commonly called a contrail, formed from the steam in aircraft exhaust. 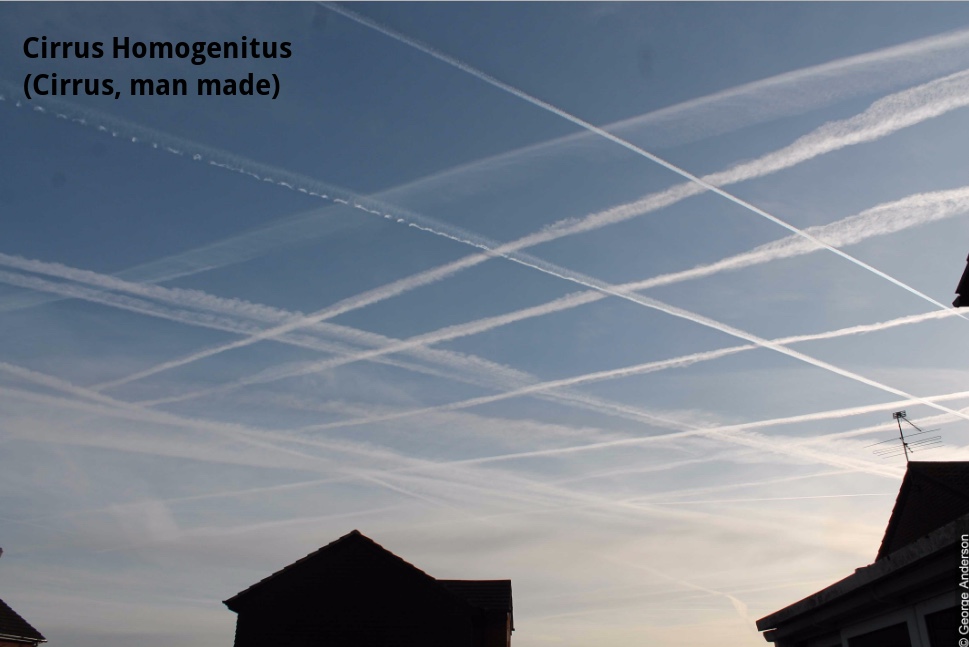 The mutatus label comes in when the clouds change from one form to another - usually just due to the motion of air. A Homomutatus tag means the clouds changed from a man-made cloud to the current type of cloud. For example the cirrus homogenitus clouds might drift out into the form of cirrus uncinus clouds, in which case we would call them cirrus uncinus homomutatus 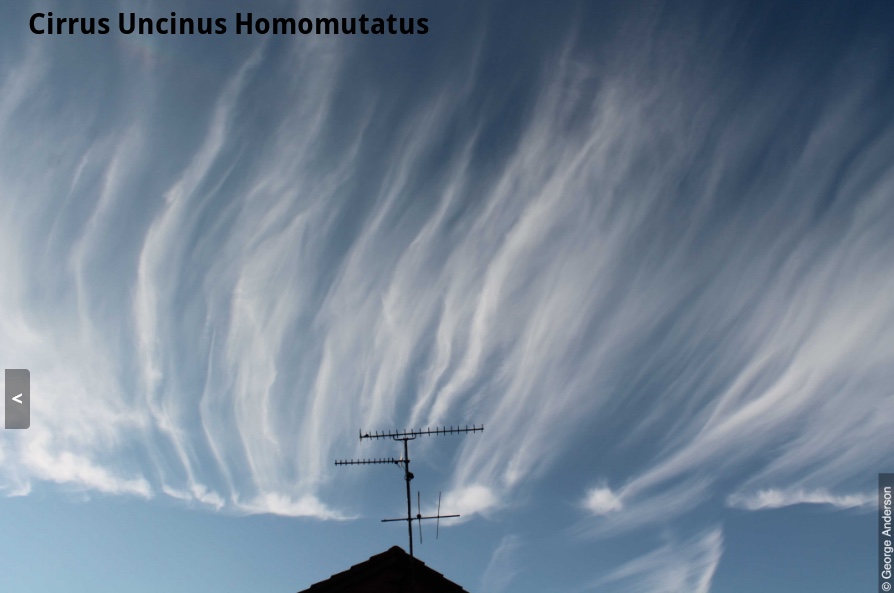 A perhaps overly complicated way of saying "a man made cloud (contrail) that changed into cirrus uncinus". But the point of the latin classifications for clouds has always been to give a language-independent scientific way of describing clouds.

So, in summary there are no new types of clouds. The vast majority of the clouds in the atlas have been around for billions of years. The only "new" clouds date back as far as the invention of the thing that produced them. Cumulus homogenitus clouds have formed over mills and factories for hundreds of years, and over power station for a century. Contrails and the clouds they develop into (cirrus homogenitus and cirrus homomutatis) have existed as long as planes have been able to fly that high, back to around 1920. We actually have an account of what might have been the first cirrus homomutatis, nearly 100 years ago.
http://contrailscience.com/pre-wwii-contrails/ 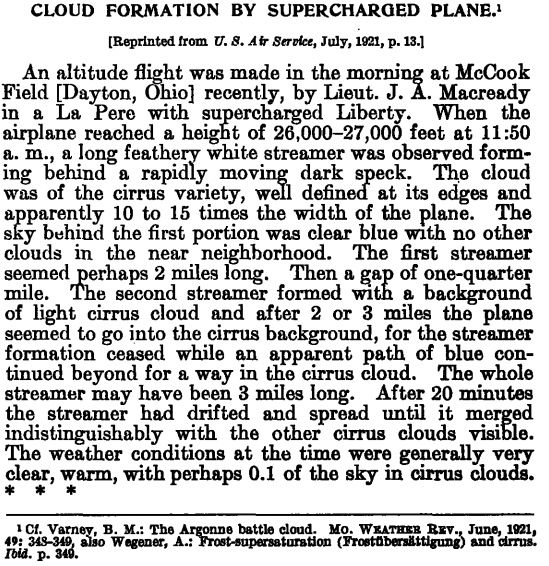 And there are some folks who thinks that lensclouds are hiding spots for UFOs... haha!

Thank you for the article!

(agreeing with Mick....)
New classifications in scientific or earth-science taxonomy are simply defining a notable repeatable occurrence, and then naming this. They can be defined as a "new" species, sub-species, variety, etc.
Generally this happens because of newer learned, and more specific science data.
It would be quite ridiculous to assume that the total science and physics of clouds is known (to man), therefore the names sometimes need to change (or are added) to update and further specify the newest data.

In a most general example, historically, what was known about human blood ?
Little was known about this red stuff before 1900 (new powerful microscopes and chemical testing). Since then, it was discovered there were different blood types (A, B, AB, O). Now we know additional constituents of blood, like oxygen (gas) content, PH qualities, protein constituents, and the DNA it contains. Point being, as we learn, we name or re-name something.

In plant genera, taxonomical updates come often, especially since DNA recognition. Almost yearly, plants we "seemed to know" just a few years ago -- these plants have achieved new names or have been sub-categorized.
Especially active changes are found in the wide Family, Orchidae. I like to grow orchids, and it seems every few years there is a new scientific or classification name for some of my plants. It's almost too hard to keep up !!


Plant name changes, added, or more corrected, over time.....
(changes are in bold)
http://www.ipni.org/epithet_changes-all.html
Last edited: Apr 14, 2017
You must log in or register to reply here.