I saw the above image shared on Facebook with the description: 'Death Valley is coming to life as a direct result of the rains caused by El Niño. Called a "superbloom".'

The problem is it's not Death Valley, and it's not this year. It's actually from 11 years ago, and was taken in the Tremblor Range in California (170 miles from Death Valley) in march 2005 by Frank Kee.

Even back in 2008 the image had been widely and misleadingly shared on the internet, as the photographer himself describes:
https://web.archive.org/web/20080613124558/http://www.keesphotos.com/gallery/1680669_gmPVN

God Spilled the Paint. One of California Most Spectacular Desert Wildflower Blooms. Mar 2005 Tremblor Range adjacent to Carizzo Plains Nat. Monument. Featured Best Photo 2005 in http://www.desertusa.comandhttp://www.truthorfiction.com/rumors/w/wildflowers.htm. and others Wildly circulated by email and rumored about. It is also a popular topic for forum and blog posts. The image circulates with various titles, including, "God Spilled the Paint", "The Day That God Spilled the Paint" and "God's Paint Spill". Just Google it I was amazed. -Frank Kee

Content from external source
Now this is a pretty harmless example of bunk (except for Mr Kee not getting due credit). But it's a great illustration of why we should not trust the labeling of images on the internet. I had immediate suspicions on seeing the image, so did a quick image search, and one of the first things that came up was a story about desert blooms in Chile:

​
There were even multiple instances of this image being used to illustrate the story of the bloom in the Atacama desert, so it seemed like case closed at that point.
http://www.telesurtv.net/english/mu...m-in-Chiles-Atacama-Desert-20151102-0017.html

​
I was about to point out (on Facebook) where the image had come from, but when I clicked on the Twitter link the post was missing. So I searched a little further, and found hundreds more usages of the image, many predating this tweet and the 2015 story about Atacama.

It then became obvious that this was a very old image (in internet terms), and one that had been shared so many times its origin might be hard to find. Reverse image searches just turned up hundreds more examples, and the oldest one on Tineye.com was only 2008.

So instead of searching by image, I searched with a few search terms to see what came up "Desert Bloom", "Death valley flowers bloom", etc. Finally got a result with "Desert wildflowers" 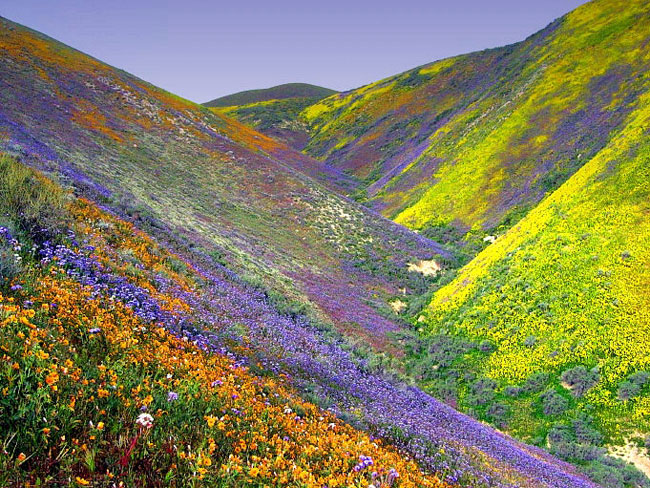 In 2005 Frank Kee sent this photo to our desert wildflower report, the photo was taken the Carrizo Plain NM. The 2010 desert wildflower season may be as good as 2005 if some of the weather forecasts come true. The picture is still popular on the internet and it was our picture of the year in 2005.

Content from external source
The first link changes with time, but a bit of digging in Archive.org (looking at the page around March 2005), and we find the original:
https://web.archive.org/web/20050415005411/http://www.desertusa.com/wildflo/ca.html

Apr. 4, 2005 Frank Reports: Carrizo Plains Trip Mar 27. Of all the places my wife and I have been hunting wildflowers in the last few weeks (Death Valley, Mojave, Antelope Valley) this location on the East side of Carrizo plains in the Temblor range (which I will name 7th heaven) was the absolute exquisite winner. Saturated with orange & yellow daisies and blue phacelia. You'll cry! If you want to see it hurry it will not last much longer. DIRECTIONS You have to go about 9 miles south from 58 on Elkhorn Rd. Around the 9 mile point look up to the East and find the mountain that looks like someone took pastel chalk and colored it. Cue: When you reach a cattle fence that goes up hills on both sides and cuts the road you'll find an East track Road that goes up a steep hill. To the left of this road is a small canyon or wash that leads to this Valley were picture was taken. You can actually drive into this canyon through a gate about quarter mile up from Elkhorn Rd intersection on the East track. You can also park just before the steep uphill climb then hike down to the canyon. Note you will have to crawl under barbed fence and walk in. Follow the canyon road until it runs out into a wash. To you left is a ridge you can hike a half mile up to reach this canyon. Near GPS Way Point N35,13.816" W119,44.290' elevation 2376 ft . Note see new report 4/12/05 above.

Content from external source
​
So the lesson here in tracking down a suspicious image is not to stop when you find what looks like the real source. Apply the same skepticism you did to the original source, and check to see if that claim actually holds up. A quick and necessary test is to see if the image existed at an earlier date. In this case the story about the desert blooms in Chile looked authoritative, even crediting a photographer (not Mr Kee though). However the story was from 2015, and there were hundreds of usages of the photo from earlier years.

And don't just rely on image searches. Keyword search can return results that are more relevant. Sometimes you've just got to keep digging until something crops up.

The GPS checks out too.

Staff member
This particular image is so old it was briefly debunked ten years ago, in 2006, when there were already a variety of different stories about it.
https://www.truthorfiction.com/wildflowers/

We’ve received versions that say it was taken by a woman named Barbara in Southern California in May, 2005, a California woman named Chandra, a California man named Frank, and that it was a scene from an unknown Israeli photographer and was of the side of Mount Tabor in Israel.

Content from external source
There was actually a link to TruthorFiction in the desertusa.com forum post, but unfortunately they had changed their URL format so the link was broken.

It was also covered on Snopes:
http://www.snopes.com/photos/natural/flowers.asp

Content from external source
The "Status: True" is a bit unfortunate though, as one might be tempted to quickly assume that the new Facebook claim checks out. They also repeat the location as "East of Tehachapi", which is flat wrong, as it's 70 miles West of Tehachapi - almost none of the description in the example is correct, so a bit of a poor job by Snopes there.
Last edited: Feb 29, 2016

I took a whirl through Google to see if I could trace it back using some of their advanced tools, but no cigar.

Interestingly though this image appears on the first page of results for [scottish countryside] and [iranian landscape] and presumably a multitude of others. It's really done the rounds.

Staff member
It's got quite a range, here's another fake usage, this time in India.
https://tonmoybora.wordpress.com/2014/10/05/north-east-india-the-paradise-unexplored/

And one more, also in India:
http://www.indialine.com/travel/uttaranchal/chamoli/valley-of-flowers.html

A non-natural purple sky in the OP image hints on its colours being modified or enhanced. Nevertheless, these and other images found by searching flickr for 'mojave desert wildflowers' confirm that the desert in April can be very colourful indeed:

Trailspotter said:
A non-natural purple sky in the OP image hints on its colours being modified or enhanced
Click to expand...

his exif data is in the photo.

Trailspotter said:
A non-natural purple sky in the OP image hints on its colours being modified or enhanced. Nevertheless, these and other images found by searching flickr for 'mojave desert wildflowers' confirm that the desert in April can be very colourful indeed:
Click to expand...

It is quite the sight to see. The first 2, I took on April 20, 2014 near Lancaster CA, along Hwy. 138, near the California Poppy Reserve. The second 2, March 15, 2013 along Hwy 223 near Arvin CA. It doesn't happen every year, the timing of the rain and warming of Spring have to be just right. The bloom has been decent this year, possibly the rain predicted this weekend will push it over the top.

"Not orange, not gold, but if pure gold were liquid and could raise a cream, that golden cream might be like the color of the poppies." John Steinbeck
Last edited: Mar 1, 2016

Staff member
Those are California Poppys which is the state flower of California.

So pretty. Now I'm tempted to go on a road trip this weekend - just need to figure out where:
http://www.wondermondo.com/Best/NA/CalifPoppies.htm

Marin B said:
So pretty. Now I'm tempted to go on a road trip this weekend - just need to figure out where:
http://www.wondermondo.com/Best/NA/CalifPoppies.htm
Click to expand...

This site keeps up pretty well.

If you want to chase the valley in the OP, this is today's report.

That's the site the photo in question was first posted on. They do indeed seem to keep up pretty well.

looks like the weather there is mid 70's, sunny, and 100% chance of Allergy attacks.

trevor said:
looks like the weather there is mid 70's, sunny, and 100% chance of Allergy attacks.
Click to expand... 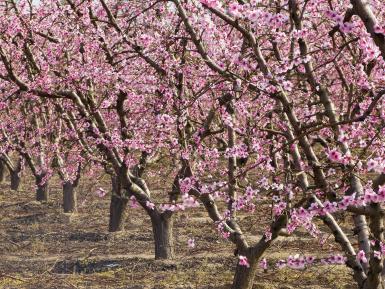 my eyes are itching just from looking at these pictures.

I was testing Google Image to identify photos and it suggested that the famous 2005 Frank Kee picture from Carrizo Plains, was in China
You must log in or register to reply here.
Related Articles
The Origin of the "Polaris is visible from south of the equator" Myth
Origin of 3 contrail pseudoconditions?
Explained: Viral Video of 787 Leaving Thick Contrails with Forced Perspective
How Fake News Goes Viral
Why People are 'Suddenly' Seeing Strange Beams of Light Around the World - The Reddit Effect
Debunked: Video of UFO behind a cloud, dropping flashing blue lights [Viral Marketing Hoax]
Hidden Viral gene found in GMO Crops?
"Drone" Photo over Colorado - Actually a Boeing 737
UFO Billboard in Montana Uses Photo of Identified Flying Object
Edited Photo of Ghislaine Maxwell at In-N-Out
Chicago Skyline from Indiana Dunes, 33 miles away
Explained: "UFOS" in Donald Trump's Crowd Photo on 4th of July
Debunked: Photo with Sun Rays at Odd Angles
Explained: Photo of 747 with Contrails Only on One Side [Fake, April Fool]
A "Molten Metal" 9/11 Photo - Is Just Burning Paper
"Castle in the Sky" [Huawei phone digital glitch, 海市蜃楼 华为 ]
Two objects over Ribblehead Viaduct [Probably birds]
Explained: Dark Streak UFO Photo - Barn Swallow + Motion Blur
WHAT IS THIS LINE? (on my Super Blue Blood Moon Photo) - Smarter Every Day 188
Apollo 12 photo analysis shows Sun as bulb [claim]
What is this? [unidentified object in photo from vehicle: lamp post]
Explained: Photo from ISS shows "open window" [Scratch Cover]
Explained: Photo of "UFO" Used in Connection with Nimitz Incident [Balloon]
Debunked: Iconic Charlottesville photo photoshopped; false flag
Help with Photo Of Dark Lines in Clouds needed.
NASA fakes Michael Collins' spacewalk photo (artistic representation of event)
Explained: Why does this Apollo11 photo act so weirdly?
How to Take a Photo of the Curve of the Horizon
How can I debunk the orbs in this photo?
Does this photo show a too-small hole in the Pentagon? [No]
Analysis: Crathes Castle "Ghost" in Doorway Photo
London bombings 7/7. Was official photo of bombers photoshopped? [No]
Explaining the Ghost Boy in the Back Seat Photo with Occam's Razor
Calculating the height of something in a P900 photo when distance is known
White streaks in photo?
I'm trying to ID the flight for this old photo of mine, Feb 19, 2014 5:25 pm
What's the Highest Contrail You've Taken a Photo Of?
Explained: Apollo 17 Photo of Earth from Moon Seems too High
Misleading: Detroit vs. Hiroshima Photo Comparisons
Debunked: Blanketman photo proves Nice attack a false flag
Explained: Jupiter Photos look the same [Composite photo]
Debunked - Photo of Hitler and Henry Ford Together [actually Wilhelm Frick]
Debunked: Boston bombing recovery photo makes no sense from medical point of view
Photo of "Syrian opposition"
Photo Anomaly - Missing my face.
Debunked: Photo claiming to be Iraqi Chemical WMDs in Syria [Photo is actually in Utah]
1952 - Condensation Trails From Aircraft - With a 1937 Persistent Contrail Photo - Oldest Ever?
Debunked: Ghost Photo in Stony River Hotel, Okato, NZ [Light in Fridge]
Debunked: Photo of '777' transported in jungle [Old 737]
Madisonstar Moon posts 59 year old photo of B47's contrailing.
Share:
Facebook Twitter Reddit Pinterest Tumblr WhatsApp Email Link