The Claims of Michael J. Murphy - A Factual Examination

The purpose of this thread is to examine the claims, in no particular order, made by Michael J. Murphy about 'chemtrails'. I encourage anyone to check out what he says and research the when, what, where, how and why he is saying it, then examine the statement and evaluate it based on fact and logic. Source and document his statements and references you use. What he is saying may eventually end up as evidence that will be of some value in the future, and I hope others will help. He is invited to respond to this, and if proven incorrect, we should acknowledge any mistakes made on our part, just as we expect him to acknowldge his own.

I must mention that on May 18th, 2011, I did email Michael J. Murphy a number of questions regarding some of his statements which will be addressed below, and 3 weeks later he continues to make the same statements with no corrections and no response.

Claim #1-
In the area of Mohave County, Arizona, due to chemtrails spraying, 25 people had blood tests which showed barium at over 1000 times the toxic level.

In a youtube video of a radio show from June 1, 2011, Michael J. Murphy was interviewed by Dr Stan Monteith available here:


Dr. Stan Monteith : @00:32 So, is there anything new that you've come up with since our last conversation?

Michael J. Murphy : Well, of course I think so, many things are new since we spoke, of course we had spoken about the action and people are awakening about the chemtrails geoengineering program that was happening in Maui, Hawaii, they are working on a bill that would essentially ban spraying above Hawaii and a new thing that is coming out, I believe in Mohave County, Arizona, over 30 citizens in that area have taken blood tests. Those blood tests were extremely high revealing high amounts of aluminum and barium, I believe 25 out of the 30 had around 1000 times above the toxic amount of barium.

Gianluca Zanna : The maximum levels according to Labcore labs for the BARIUM (a toxic element) is 2 and Quest Labs is 10... the maximum reporting level for barium is 11 mcg. 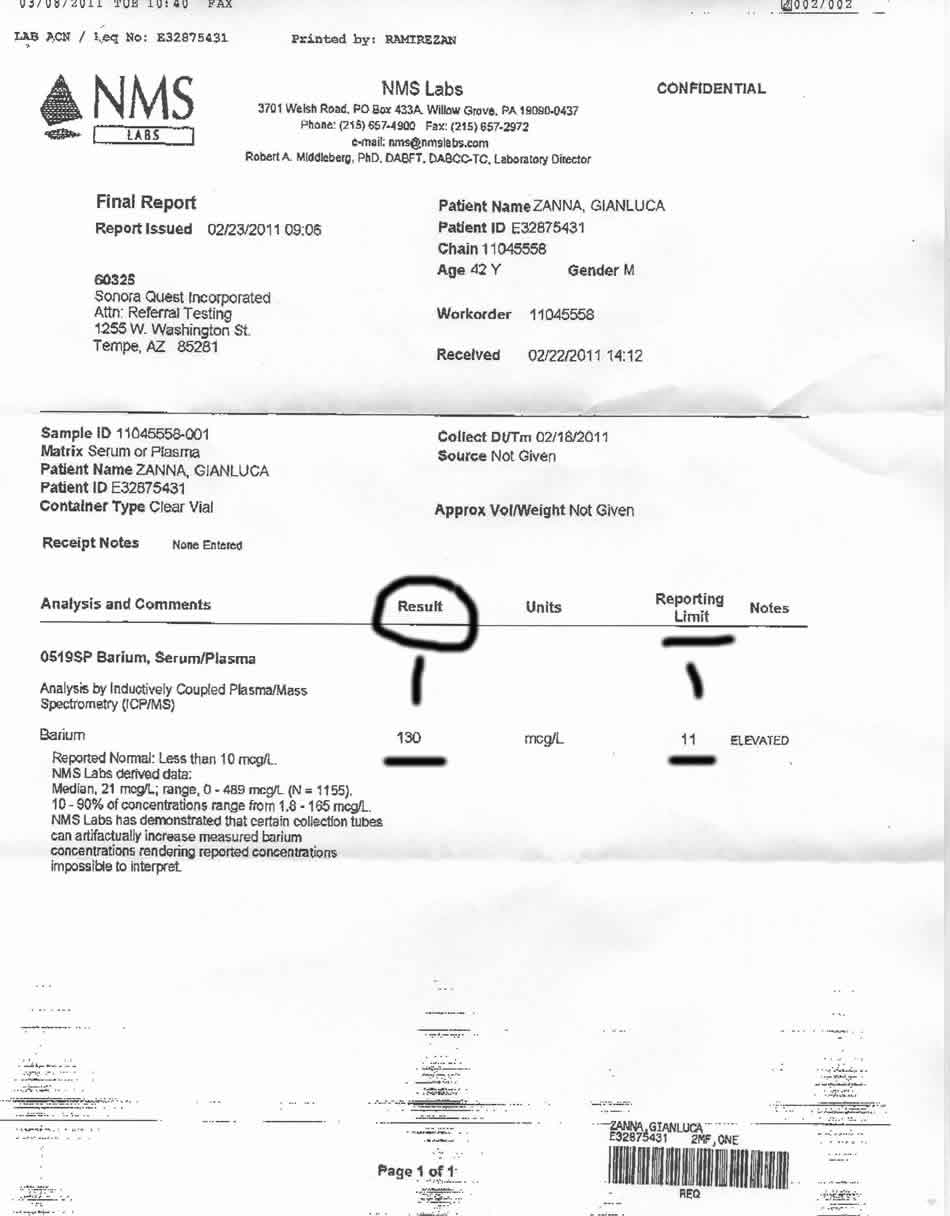 Q: What does a "reporting limit" mean?
A: This is the minimum detectable amount for which we will make a report.

Q: What does elevated mean?
A: Any amount above the median(average) amount will be reported as elevated.

Q: What does "N-1155" mean?
A.: That is the number of people that NMS tested when we were researching average blood barium levels.

These tests in actuality are an indication that debunks the "barium is being sprayed" claim!

Murphy's claim isn't even logical. If all those people had 1000 times a toxic level in their blood, they would have been buried already. Dr. Stanley Monteith should know better as well.

A predicted 3” rain in Siskiyou County, California, was dried up by jets spraying barium, which is a desiccant.


Michael J. Murphy said:
@ 17:00 The story I wanted to share with you is about Dane Wigington, who is a solar power expert and he’s also worked in lightning suppression, so he’s studied weather and he has 2000 acres overlooking Lake Shasta and we interviewed him and it’s very sad because much of the plant life there is dying off, but we spent a couple of days there in the late fall and on his property there was a big winter storm that was coming in and I think it was projected to drop 3” of rain. And when we woke up in the morning he said, “Michael, what do you hear?, and I said “I hear jets”, and he said “we are not at all in a flight path, but you will hear these jets flying by all day, its very common,” and what he said was, “What I think they are doing is seeding the clouds, sequestering the moisture, you see, barium is a desiccant, and it will change the molecular structure of the clouds so it will not rain.”
http://www.blogtalkradio.com/finteg...rphy-and-g-edward-griffin-chemtrails-revealed
Click to expand...

This is not the only time Murphy has referenced this claim. In his Youtube video, “Hawaii Revisited”, he said:


Michael J. Murphy said:
@8:40 “They can steer storms, barium is a desiccant as well, so typically in Northern California, when the rain storms come in, it’s very common to hear airplanes flying over these clouds and its amazing in the past couple of years when these storms come in, they usually bring about 3” of rain, now they are getting a quarter inch, a half inch, not much rain........ Its hurting people, its killing people, and many people have died from this. What do you think people would do if they found out that there might be corporations behind their incredible losses?”
http://www.youtube.com/watch?v=M-0XEQP3igk
Click to expand...

Is Murphy’s claim plausible, or not? He is obviously unfamiliar with chemistry and aviation, and his comments also show that he doesn’t actually know anything barium. This is odd, especially since he has been making claims about barium for years.

What would be required to use barium oxide as a desiccant sprayed from an airplane to “sequester” a 3” rain down to a ½” rain?

First, we are trying to subtract a 3” rain minus ½”, so that equals 2 & ½ inches of rain. A 1” rain falling over one square mile yields 17.38 million gallons of water:
http://ga.water.usgs.gov/edu/earthrain.html

Now for the chemistry, remember high school, folks? Maybe Michael slept through this one…..

Conclusion: Michael J. Murphy’s claim that jets spraying barium(oxide) could have reduced rainfall by 2 & ½ inches over Siskiyou County would require 3369 flights of 747 cargo class jets. The claim is quite simply preposterous. This example is just one of many in which people who believe in chemtrails appear to simply repeat what others say with no proof or rational examination whatsoever.

Murphy's statement that, "Its hurting people, its killing people, and many people have died from this. What do you think people would do if they found out that there might be corporations behind their incredible losses?”, sounds like a provocation. He bears the responsibility for these statements, because besides being baseless, they are very reckless to make towards his target audience of known gullibles.

A Response from Michael Murphy?

I passed along my posting above regarding Claim #1 to Mr. G. Edward Griffin, who forwarded it to his colleague Michael J. Murphy and stated that Mr. Murphy was working on a response. I have had no direct response from Murphy, but I did receive
an email from someone who was "asked to comment", I assume by Mr. Murphy.

The person made several claims, and I asked for references, evidence, and documentation. I received an insulting email back and referred the person to this thread for edification.

This is what I told him:

Jay Reynolds said:
Insults don't make your case any stronger or reflect very well on Mr. Murphy who sent you.
I am 55 years old. I currently work as a US Coast Guard licensed Merchant Marine Officer in the position of Chief Engineer.
Here is my bio:
http://goodsky.homestead.com/files/aboutjay.html

Still, I consider this a learning experience for me. I have learned yet again that it seems the best Mr. Murphy can come up with is an anonymous person who makes claims and cannot back them up! I will be sure to make this information publicly known.

Since there is a slight chance that a small bit of education might do you and Mr. Murphy some good, I will now provide you with documentation for normal blood levels of barium in the human body and sources of barium in the environment. Multiple sources, including NMS Labs, the lab which did ALL the testing in question. If you have a substantive response, feel free to respond to me by email or publicly at this URL:
https://www.metabunk.org/threads/128-High-barium-levels-in-blood-(-Mohave-AZ-)