The Amazing Meeting 2013 - My Impressions

Staff member
The Amazing Meeting (TAM) is a four day conference on skepticism organized by the James Randi Educational Foundation (JREF). It's been running for 10 years, and this was the first year I attended, so I thought I'd quickly write up my impressions.

Conferences generally serve two functions, firstly as a way of learning more about a subject, but secondly as a social and networking opportunity, where you can meet like-minded people and discuss the topics with them. If your only concern is the former (learning more), then you really don't even need to go to the conference. All of the talks will be available on YouTube (the TAM 2012 talks are there already) The rather concentrated nature of the large number of talks crammed into four days makes it rather hard to take it all in.

So for me, really the most valuable parts of the conference were in meeting other skeptics and debunkers, conversing with them, and just simply observing and listening to them. So I'll write more about that than about the actual content of the talks.

There was also a currently minor component of self-publicity, as I could tell people about metabunk.org and contailscience.com, and I handed out a few business cards with the site address. But that really was fairly minor.

The schedule is pretty brutal, breakfast at 7:30, the first talk at 8:00AM, almost solid talks until 6PM, with very few breaks in-between. Then there was often some other entertainment events at 9PM, and a few more social events from 11PM to 1AM. So sleep deprivation was a bit of an issue from time to time. Plus it's in Las Vegas, so there's lots of other potential distractions (which I managed to largely ignore, helped by the hotel being way off-strip, and it being about 106F out).

The conference ran from thursday through sunday, so I arrive on wednesday evening. I headed straight to the hotel bar where there were already a few skeptics gathering. I sat by myself for a while, as everyone else seemed to be in groups of people who already knew each other. Obviously its a regular social event for many people.

But eventually I was drawn into a group of skeptics playing some board game with magnets, then I met some more people at the bar and sat drinking and chatting with them and other folk late into the evening. Getting up the next day in time for breakfast was a little touch-and-go.

There was a very mixed bag of attendees. probably around 80% male, but with a solid spread over the full age range of mid-20s to 70s, with a few outliers in their teens and 80s.

I've been to a lot of crime fiction conferences, and there I learned of the "two conferences" theory, where there are essentially two simultaneous conferences that are superimposed on each other. There's the "writers' conference" where writers come to learn more about writing, to present talks, and to publicise their work, and then there's the "fans' conference", people who don't write, but read a lot. Writers and fans, producers and consumers.

To a degree this was true here, although the boundaries were even more blurred. There were people very active in the skeptic movement, people who wrote books, created podcasts, posted extensively on forums, or had their own web sites. Then there were people who were more the consumers of those things - skeptic fans. In particular there were a large number of people (maybe as much as 20%) who were attending the conference basically because they were big fans of the podcast "Skeptics Guide to the Universe" (SGU).

As I said, the boundaries between the "two conferences" were more blurred than a simple "writers/readers". Pretty much everyone had done some active debunking, even if it's only talking with people they know, or discussing things on facebook. But the dividing line might be drawn between those who do that one-on-one debunking, and those who have a magnified effect by debunking in such a way that it reaches more than one person. The people with books, podcasts and blogs that reach more than a handful of people per day.

Another fuzzy dividing line between attendees would be the atheism factor. Some people (I'm not really clear on the percentages) seemed to focus mostly on the subjects of atheism and religion. This (anecdotally) seemed to be people who grew up with some religious background, and then stopped believing at some point. And very anecdotally I got the impression that that was the primary point for the older attendees.

I don't really bother too much with atheism (although I am an atheist). The arguments there are centuries old, there's not a lot new going on, and there are already many far more capable people engaged with the debate.

Then there's the related topic of the paranormal. JREF as an organization has a strong focus on exposing fake mediums and psychics (fake arguably being all of them, of course, but really the fake one are those that don't say they are fake). Again this is a topic I'm not really interested in. So this left me feeling a little bit like an outsider (or at least into the "fan" conference rather than the "writers" conference - for this particular aspect).

But there was plenty for everyone. Many of the talks were general in nature, dealing with the psychology of believers, or how best to get across some skeptical research. There was an especially interesting set of talks on tools that could be used to make online debunking more effective. Things like rbutr.com and mywot.com. Then there was the crowdsourcing talks, encouraging people to improve wikipedia, and more controversially to vote down "bad" pages on WOT.

Overall I had a great time, met many interesting people, and gained lots of valuable perspective on the skeptical movement. I intend to go back next year, and might even see if I can have a go at presenting.

Thanks Mick... very interesting. i had no idea such a thing existed.

Thanks also from me Mick. Never been there but was veryyyy close to attending this year.
And I do post on the Randi (JREF) forum but only for a few years. And it and the meeting
have been around for awhile. And I sort of see the reports from the members there.....

But it is also good to get a report from a stranger. And most people who attend aren't regular
posters on Randi's site.

And yeah. In this day and age of instant enlightenment and communication......
Well few go there for that. The official stuff gets captured on some type of media and you can view it for free.

People go for the 'Experience'. Which means a million things for a million different people.
But still............ it is just human beings interacting on a basic level.
Which is always a good thing.
So you can't argue with that.

Banned
Did you attend Penn's bacon and donuts party and if so how was it?

Sticky Fingers said:
(and did you make it to the Del Mar???)
Click to expand...

Every evening. It's just the main bar area in the Casino with lots of seating, nothing special, but it's where people congregate, and a good place to meet people.

Here's a photo I took of it:

Soulfly said:
Did you attend Penn's bacon and donuts party and if so how was it?
Click to expand...

I did, it was fun. Mostly centered around the performance of Penn's No God Band, which was entertaining. It was all just in a big conference room with donuts, bacon, and bars at various strategic points, and the stage at the end. It felt a little uncrowded, but then it was after midnight before they got on stage. A mixed crowd, and the material might not have been for everyone (like a hearty sing-along to the lyrics of something along the lines of "in a river of s**t you c**t", which got kind of awkward). Well worth attending though, if you can do without the sleep. I still managed to get up at 7AM the next day.
Last edited: Jul 18, 2013

Distance not withstanding have you, or one else, considered setting up a meeting for Metabunkers? I am thinking that with the Chemtrailers in the UK they are getting more organised and meeting up in real life, and to be fair I probably would get along with most of them as we share similar values, yet Metabunkers are such a disparate group. I am looking at attending a chemtrailer talk and have no confidence problems but I know it would help to meet other debunkers face to face sometimes.

Biggerdave said:
Distance not withstanding have you, or one else, considered setting up a meeting for Metabunkers? I am thinking that with the Chemtrailers in the UK they are getting more organised and meeting up in real life, and to be fair I probably would get along with most of them as we share similar values, yet Metabunkers are such a disparate group. I am looking at attending a chemtrailer talk and have no confidence problems but I know it would help to meet other debunkers face to face sometimes.
Click to expand...

That's not something that occurred to me, the "Metabunkers" are a rather disparate group, and not an incredibly large one. (I have 1,033 members, JREF has 31,510)

That said, if anyone is in Los Angeles, and wants to meet up, then let me know. 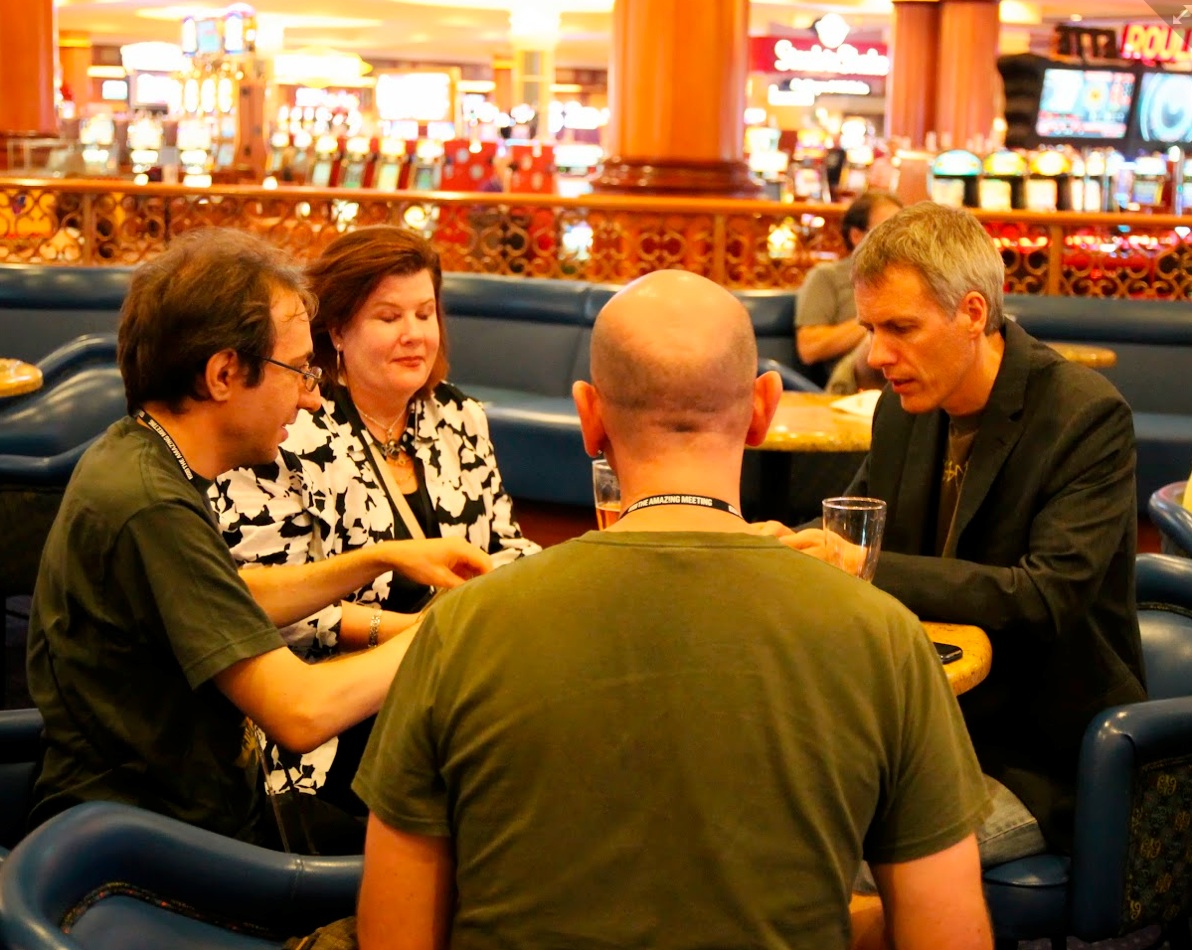 
The guy on the left sort of looks like Mitch, who goes by Wowbagger on the JREF.
Last edited by a moderator: Nov 20, 2013

Staff member
That is Mitch. We were playing a magnet game he had. I'd only just met him there.


...we are talking about Vegas in July, a setting that had the unintended consequence of leaving me with one more religious-type belief than I'd come in with – hell.

Mick West said:
That is Mitch. We were playing a magnet game he had. I'd only just met him there.
Click to expand...

Well the pieces did tend to move by themselves. It was a game called Yikerz.
You must log in or register to reply here.