On New Year’s Eve, Motherboard broke the news that a hacking group known as The Dark Overlord was threatening to release a cache of stolen insurance and legal documents related to the 9/11 attacks. After distributing a small preview set of files, the group has now publicly released a decryption key for more files, meaning anyone can download and read them.
The news gives insight into how hacking groups may be evolving in their extortion efforts; opting to drip out stolen material bit by bit, while generating public interest through the media and their own announcements, all to exert pressure on the ransom victim.

The stolen data itself allegedly comes from a legal firm that advised Hiscox Group, a Hiscox spokesperson previously told Motherboard in a statement. The previously released documents included presentation slide decks, legal correspondence between law firms, and letters from a handful of government agencies. 9/11 conspiracy theorists have been particularly interested in the release of the documents, with internet commenters and several conspiracy-minded YouTubers making videos saying that they hope they will somehow reveal a vast conspiracy around the attacks.

Now that something has actually been released from this leak, I'm going to allow some less-structured discussion on this topic, as it's an interesting current event. The leaks appear to be real but are essentially just client-confidential information for a law firm, like lots of deposition transcripts. Fascinating stuff which might point at some ordinary indications or accusations of negligence, corruption or illegal activity, but I don't think it's going to be very satisfying to the more extreme conspiracy theorists, like AE911Truth.

Some interesting perspective can be had in a comment which claims to quote an AMA session that DO did:


As mentioned in an AMA you did in /pol:

"Q: I'd be willing to chip in with others to see it if I was sure it would be world shaking info. Not something the average person would change the TV when it came up on the news. On a scale of 1-10 how system breaking is the info?
A: You're the smart one here, asking the right questions. We'd say it's a 7.5, all things considered. Snowden may have been a 5.5, maybe a 6. More people care about 911 than USA spying. Now, our next release about UFOs, yeah, that's a 10 mate, but it's going to wait until we're done here. If you'd like to buy 911 documents from us, read the answers above."

They should sell it then to the Daily Mail. They'd get alot more money for a lot less hassle that way. 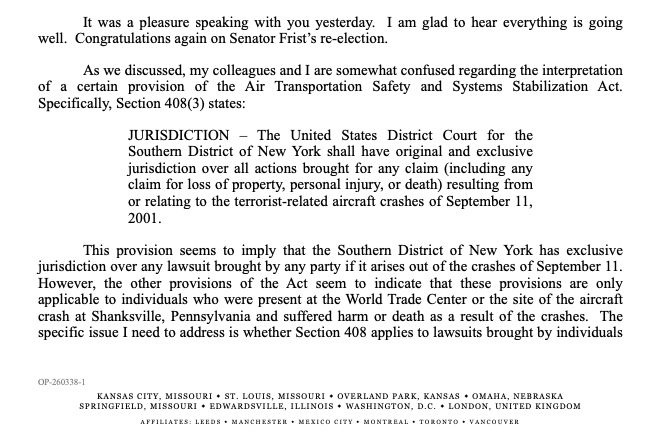 It seem, so far to be entirely about liability litigation that entirely supports the broad strokes of the "official story." So it's probably going to get dismissed as misinformation by the "Controlled Demolition" theorists.

I'd hope though that for some people the vast bulk of these documents will give them some better sense of how the world really works.

We'll see. I'm going to let other people comb through it.

hhmm.. wonder if this news from RT is true. If they are only extorting conspiracy theorists, i'm not sure how i feel about that.

The Dark Overlord initially threatened to release the 10GB of data unless the hacked firms paid an unspecified bitcoin ransom. However, on Wednesday, the group announced a "tiered compensation plan" in which the public could make bitcoin payments to unlock the troves of documents.

A day later, the Dark Overlord said that it had received more than $12,000 in bitcoin – enough to unlock "layer 1" and several "checkpoints," comprised of 650 documents in total.

There are four more layers that remain encrypted and, according to the group, "each layer contains more secrets, more damaging materials… and generally just more truth."

The hackers are asking for $2 million in bitcoin for the public release of its "megaleak," which it has dubbed "the 9/11 Papers."

From what I've seen, this looks to be a pretty shameless cash grab by the hackers in question. I guess we shouldn't be surprised about that as shameless cash grabs and extortion are this particular group's MO, but it's worth stating.

The documents released so far appear to me to all be ordinary course legal documents that any familiar with such things would expect to see. There is nothing pointing to an inside job or some other kind of cover-up, as far as I can see, which is the same thing reflected in the related public documents concerning these litigations. And there were thousands such litigations related to the 9/11 attacks (note this docket and case consolidation note from the SDNY to get a sense of how many cases there were and how courts struggled to handle them, for example) and many of them of course involved insurance claims. I would not be surprised if nearly every major insurance and re-insurance company in the world was involved in some way at some point. I would bet it was one of the most litigated events in history (with maybe only superstorms like Katrina coming close).

As an attorney myself, I find the sheer volume and scope of these litigations to be reason enough to believe that there is no truth to the inside job/controlled demolition conspiracy theories, even if you put all the other (ample) countrary evidence aside. These cases collectively involved thousands of the world's best lawyers spending hundreds of thousands of hours exactingly examining all of the events that day with billions of dollars on the line, and not a single such case ever supported such conspiracy theories, even though such conspiracy theories, if true, would have led to billions of dollars of savings for the insurance companies (such as was the case in the Aegis Insurance case re WTC7 that has been discussed at length here).

As Mick says, these files are likely to be excused away as limited hangout or misinformation by dyed-in-the-wool truthers, but, to any reasonable truth-seeker, they should go even further to provide that the inside job/controlled demolition conspiracy theories are nonsense. I thus not only hope that truthers spend money paying for access to them, but actually read and think about them; it'd definitely be a better use of money than wasting $300k to have a bridge expert in Alaska promise, but never deliver, a peer reviewed paper on WTC7's collapse.
Last edited: Jan 4, 2019

benthamitemetric said:
I thus not only hope that truthers spend money paying for access to them
Click to expand...

In that RT link it's stated they want 2 million from the public before they release any of the 'good stuff'. so , that's kinda ridiculous.

And Cyberscoop is saying (bold added for emphasis)

The Dark Overlord has implied the 9/11 Files were stolen from Silverstein Properties, a New York real estate firm, and insurers Hiscox Syndicates and Lloyd’s of London. Hiscox confirmed to Motherboard a third-party law firm that advised Hiscox had been breached, though both Silverstein and Lloyd’s denied to CyberScoop they had been hacked. The National Life Group issued a similar denial to DataBreaches.net after The Dark Overlord claimed to steal more than 500,000 records from the insurance firm.

https://www.cyberscoop.com/dark-ove...-hacked-911-files-in-effort-to-raise-bitcoin/
You must log in or register to reply here.