Claims: Stacks of bricks are left out for protesters to use, some say by the "antifa", some say by agent provocateurs. 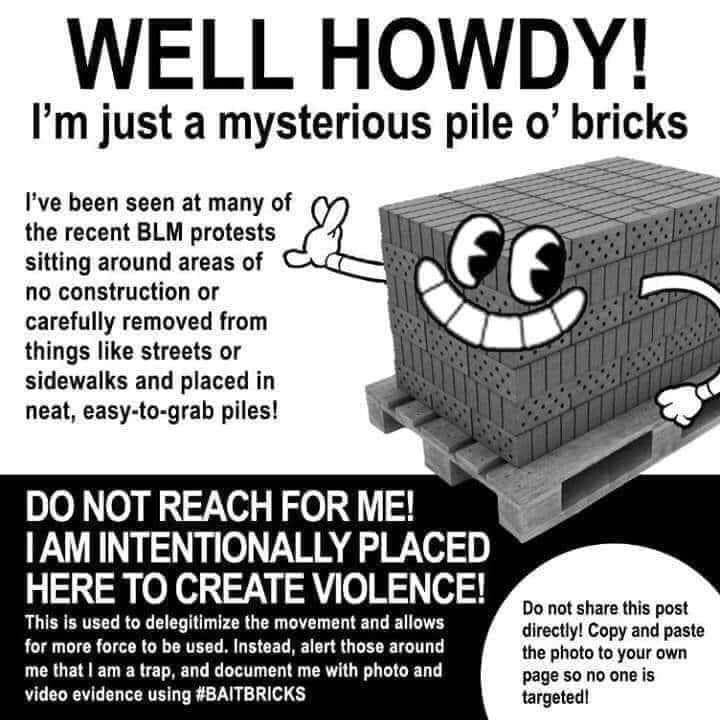 NBC News reports it's all bunk:

Video of police in Boston unloading bricks from a vehicle has been viewed millions of times. The person who first posted it has since taken it down, saying she can’t be sure whether it does indeed show officers leaving the bricks at a protest site as she first suggested. That hasn’t stopped others repeating the claim. NBC News’ has now verified the footage shows the police unloading the bricks at the police station.

Some photos, like this one in Dallas, claim the police left the bricks there to encourage a riot that they could then clamp down on. NBC News’ Verification Unit geolocated the photos and tracked down the bricks to a Dallas parking lot. They have been there for months, close to a construction site, and can be seen in an image on Google Maps Street View from February.

Another post in Frisco, TX asked “Anyone know why these random piles of bricks keep showing up near protest sites??? Someone is funding the rioting.” The local police later put out a tweet saying they’d investigated, the bricks were for a planned construction project, and they’ve been removed.

But there is no evidence that piles of bricks have been strategically placed in U.S. cities to encourage protest violence.

Mendel said:
But there is no evidence that piles of bricks have been strategically placed in U.S. cities to encourage protest violence.
Click to expand...

I think this might be all the answer required in this case.

There doesn't seem to be much reason as to why the police would want to place the bricks there in the first place, seeing how they'd be the ones facing them...
You must log in or register to reply here.