Study: 'On the Viability of Conspiratorial Beliefs

A conspiracy theory is very unlikely to be true because, sooner or later, one of the conspirators will blow its cover, a study suggests.
The research examines how long alleged conspiracies could "survive" before being revealed - deliberately or unwittingly - to the public at large.
Dr David Grimes, from Oxford University, devised an equation to express this, and then applied it to four famous collusions.
The work appears in Plos One journal.

Using a handful of assumptions, combined with mathematical deduction, Dr Grimes produced a general, but incomplete, formula.
Specifically, he was missing a good estimate for the intrinsic probability of a conspiracy failing. To determine this, Dr Grimes analysed data from three genuine collusions.
The first was the surveillance program conducted by the US National Security Agency (NSA), known as PRISM. This programme involved, at most, 36,000 people and was famously revealed by Edward Snowden after about six years.The second was the Tuskegee syphilis experiment, in which the cure for syphilis (penicillin) was purposefully withheld from African-American patients.
The experiment may have involved up to 6,700 people, and Dr Peter Buxtun blew the whistle after about 25 years.
The third was an FBI scandal in which it was revealed by Dr Frederic Whitehurst that the agency's forensic analysis was unscientific and misleading, resulting in the imprisonment and execution of innocent people.
Dr Grimes estimates that a maximum of 500 people could have been involved and that it took about six years for the scandal to be exposed.
The equation he created represents a "best case scenario" for conspirators - that is, it optimistically assumes that conspirators are good at keeping secrets and that there are no external investigations at play.

The Journal article at PLOS.org for a more detailed analysis.
Last edited: Jan 26, 2016

You see the effect all the time. There is no common ground between the believers other the very basic 'chemtrails exist', '9-11 was an inside job'. 'the CIA created ISIS' etc. Even this common ground is based on nothing other than wild speculation and any evidence to back up such ideas cannot be proved and does not stand up to scrutiny. So the CT believers look for more proof, come up with different types of even more shaky evidence, and others can't even agree on the motives of the conspirators in the first place. 'Chemtrails are geo-engineering and weather warfare'... 'No, they are population control'.... 'your both wrong - they are part of project blue beam'.. (etc ad nauseum). Then its only a short step to schism in the movement, 'I'm right and all the rest are mad / shills / wrong / etc' type flame wars and the result is they can't even agree on what the real conspiracy is, let alone put forward evidence to support their claims. The result is that these conspiracies are as about as viable as a chocolate fire screen.

Nice article. While they focus on actual collusion(s), there are several factors that would rule out colluding such as geopolitics let alone short lived collusion. Take UFOs, moon base... Why would China for instance or Russia cooperate in a coverup given they are somewhat rivals?

I usually use the Contra war against Nicaragua as an example of this model when I teach. It was (and is) ludicrous to conduct a "covert" operations comprising tens of thousands of people with the expectation that it could remain secret. And this was before cell phone, the internet, etc., when the fax machine was cutting edge technology.

Some of these have awfully long ranges of estimated time to be exposed.

JRBids said:
Some of these have awfully long ranges of estimated time to be exposed.
Click to expand...

The ranges are dependent on who is involved since there could be a huge difference in the number of actors.


Icke (as have others) blames the CIA for encouraging (or inventing) "debunking"....that the CIA coined the phrase "conspiracy theorists" after the JFK assassination, in an effort to discredit such conspiratorial thinking.
The problem with a conspiracy idea believed to be "true", is that good "evidence" is often not required. Gut or anecdotal feelings often suffices as evidence. Or, these gut feelings are the fuel to make weak evidence seem strong.
Secrets are never revealed....until they are. Then, they're no longer secrets. If they are revealed, the source of the secret-holder needs to be credible, and verifiable.
As conspiracies age with time, MATHS is a tool to estimate a conspiracy possibility....especially given the often human failure of keeping a secret, over time.

In Poor Richard’s Almanack Benjamin Franklin, under his own secret identity, asserts, “Three may keep a secret, if two of them are dead.” But even a secret known to only one isn’t likely to stay that way for long—and the means of revealing that secret are seemingly endless.
http://www.salon.com/2013/11/21/you_cant_keep_a_secret_for_long_partner/

Humans:
Modern therapy encourages the patient to reveal secrets, in order to be on the road to self-help and greater happiness.
Alcoholics Anonymous' 12 step program uses confession (admission of wrong) as a key tool toward sobriety.
Accused murders often confess their secrets, wanting to relieve their weighing burden, and become voluntarily and genuinely remorseful.......even though such a confession may lead to their life in prison.
Last edited: Feb 7, 2016


If you're thinking of creating a massive conspiracy, you may be better scaling back your plans, according to an Oxford University researcher.
While we can all keep a secret, a study by Dr David Robert Grimes suggests that large groups of people sharing in a conspiracy will very quickly give themselves away. The study is published online by journal PLOS ONE.


Dr Grimes then looked at four alleged plots, estimating the maximum number of people required to be in on the conspiracy, in order to see how viable these conspiracies could be. These include: the theory that the US moon landings were a hoax (411,000 people); that Climate Change is a fraud (405,000 people); that unsafe vaccinations are being covered up (22,000 people assuming that only the World Health Organisation and the US Centers for Disease Control are conspirators and that others involved in advocating, producing, distributing and using vaccines are dupes. 736,000 people if, as would be more likely, pharmaceutical companies were included); that the cure for Cancer is being supressed by the world's leading pharmaceutical firms (714,000 people).

'This will of course not convince everyone; there's ample evidence that belief in conspiracy is often ideological rather than rational, and that conspiracy theories thrive in an echo chamber.

which links to this page of debunking articles 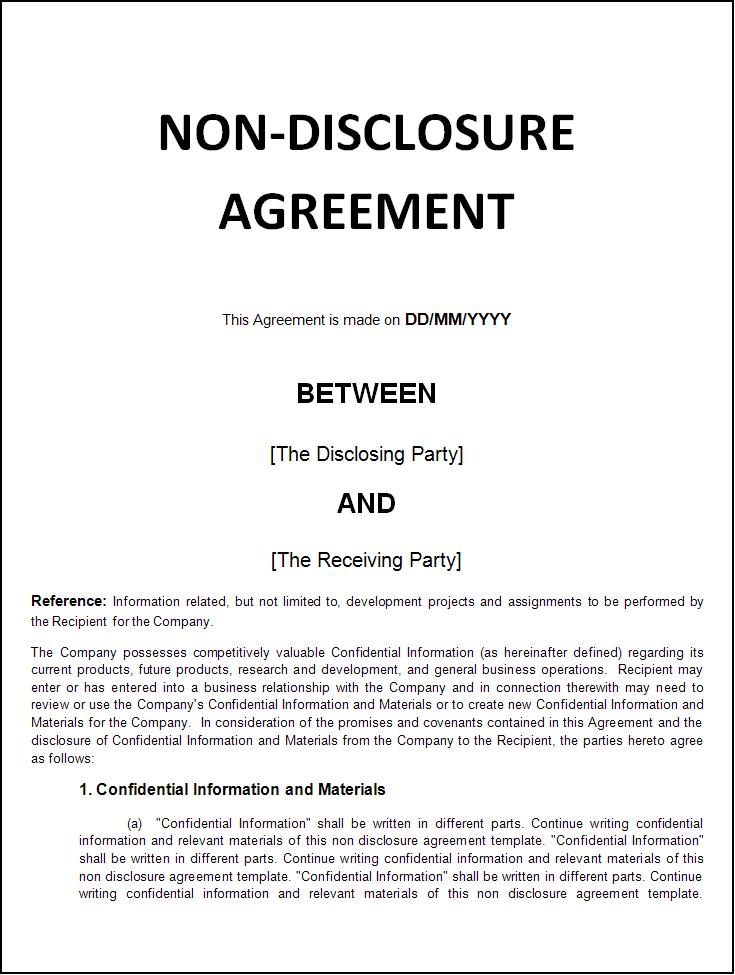 There's also some CTs who will take the flip side of this. They have their fake "insiders" and "whistleblowers," remember, and just last month we got a flood of "state of the movement" kind of statements all of which predicted that this is THE YEAR that it will all fall apart for "them" - just like every year. Most of the CT communities are fueled by this idea that it's only a matter of time, that soon, very soon, they'll win.

To their mind, this article isn't just right, but also proves THEM right.

The Plos One paper is being criticized due to little data for parameters estimation and a simplistic model:
http://littleatoms.com/david-grimes-conspiracy-theory-maths

I think that the idea still has some merit, but you cannot take its estimates for conspiracy exposure much seriously. At least not before better data and a more sophisticated model is used.

derwoodii said:
but CT will claim their conspiracy iron clad because henchmen signed one of these

Something that I find to be humorous is that while Donald Trump has recently been espousing more and more allegations of Conspiracies, that he requires all his employees and now campaign volunteers to sign a non-disclosure/non-disparagement agreement and that the "Republican nominee says he would consider requiring in the White House"

Just hours after his public firing, Donald Trump's longtime campaign manager Corey Lewandowski spoke only glowingly of his former boss, deflecting any question about the dysfunction inside the Republican campaign.

That's not surprising. Trump demands control over what his staff can say — even if they're fired — and speaking out can mean getting sued.

In his businesses and presidential campaign, Trump requires nearly everyone to sign legally binding nondisclosure agreements prohibiting them from releasing any confidential or disparaging information about the real estate mogul, his family or his companies. Those subject to confidentiality agreements include senior advisers like Lewandowski, campaign volunteers and even a maker of his famous "Make America Great Again" hats.


The practice is also something the presumptive Republican nominee says he would consider requiring in the White House, raising concerns about government transparency and freedom of information laws.


According to a Trump nondisclosure agreement obtained by The Associated Press, the celebrity billionaire has broad discretion over what could constitute a breach of confidentiality.

Employees are restricted from publicly disclosing information "of a private, proprietary or confidential nature or that Mr. Trump insists remain private or confidential," according to the document. It also requires them to return or destroy copies of any confidential information upon Trump's request. The agreement is binding during employment and "and at all times thereafter." 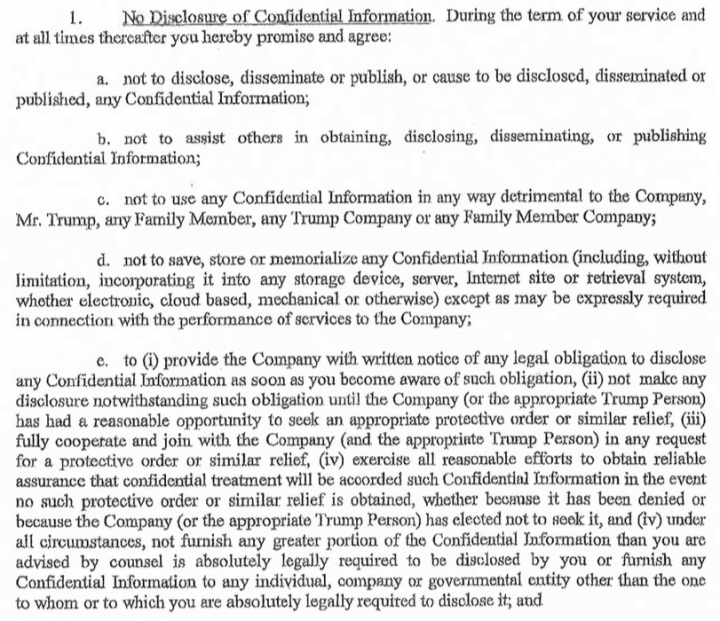 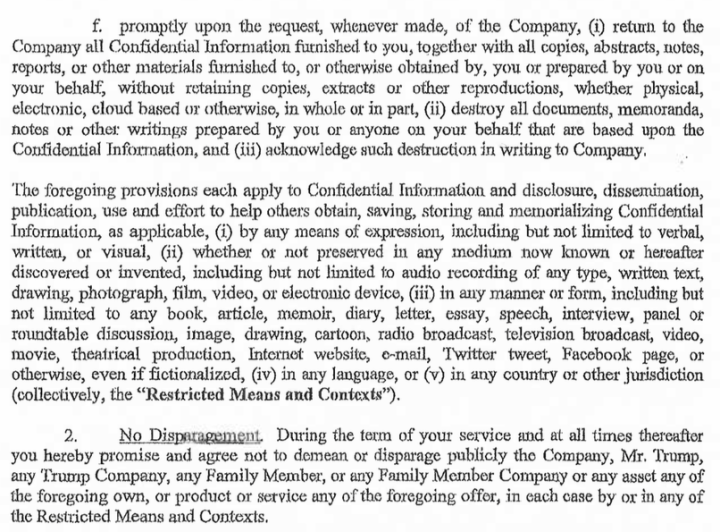 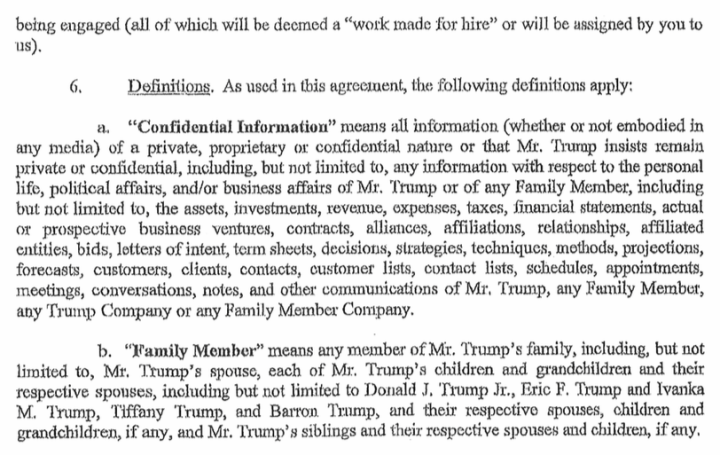