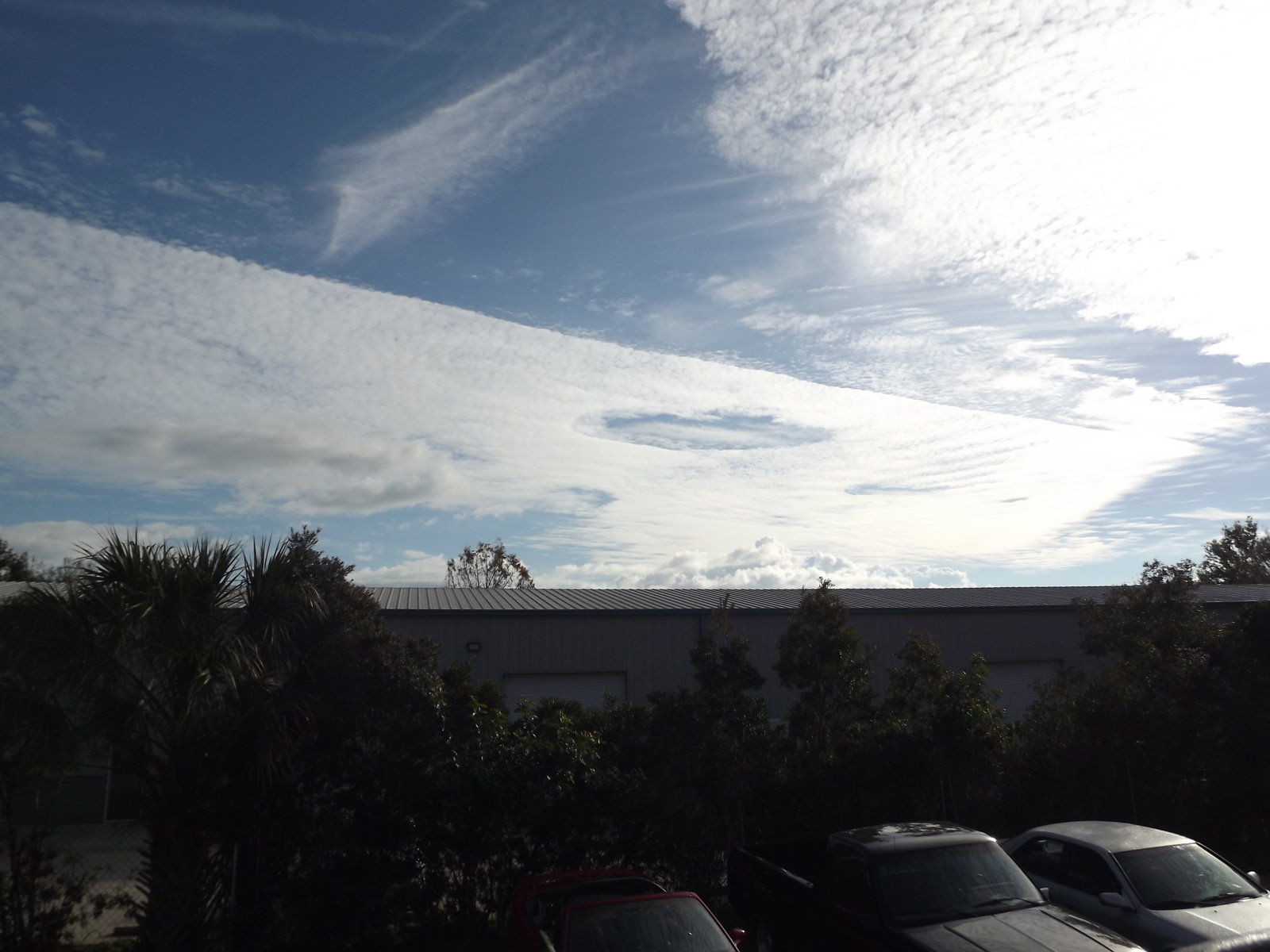 That's a beauty. Straight lines, a holepunch (possibly several), ripples. I can see a lot of chemtrail sites getting excited over that one...

Where and when exactly was this taken @Joe? Wondering if it was at all related to this: http://www.reddit.com/r/aviation/comments/2v2gqb/crazy_square_cloud_i_saw_today/ 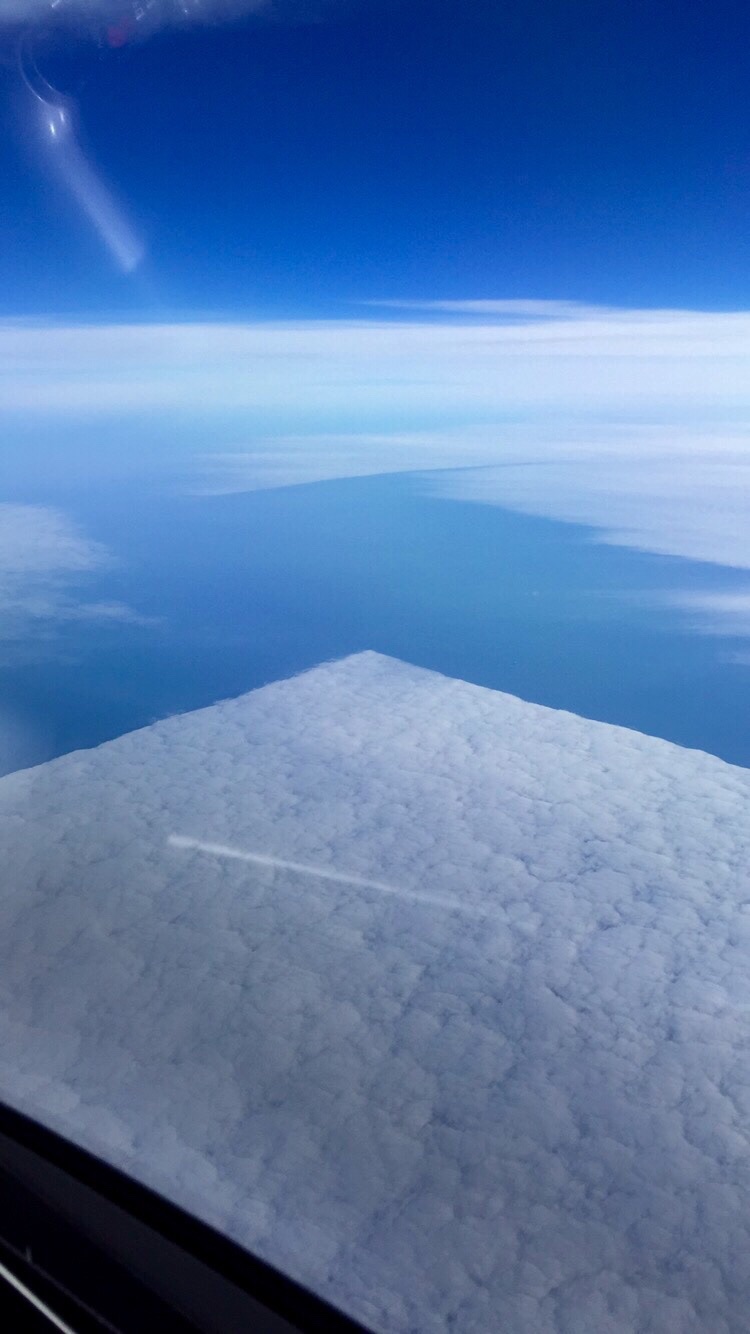 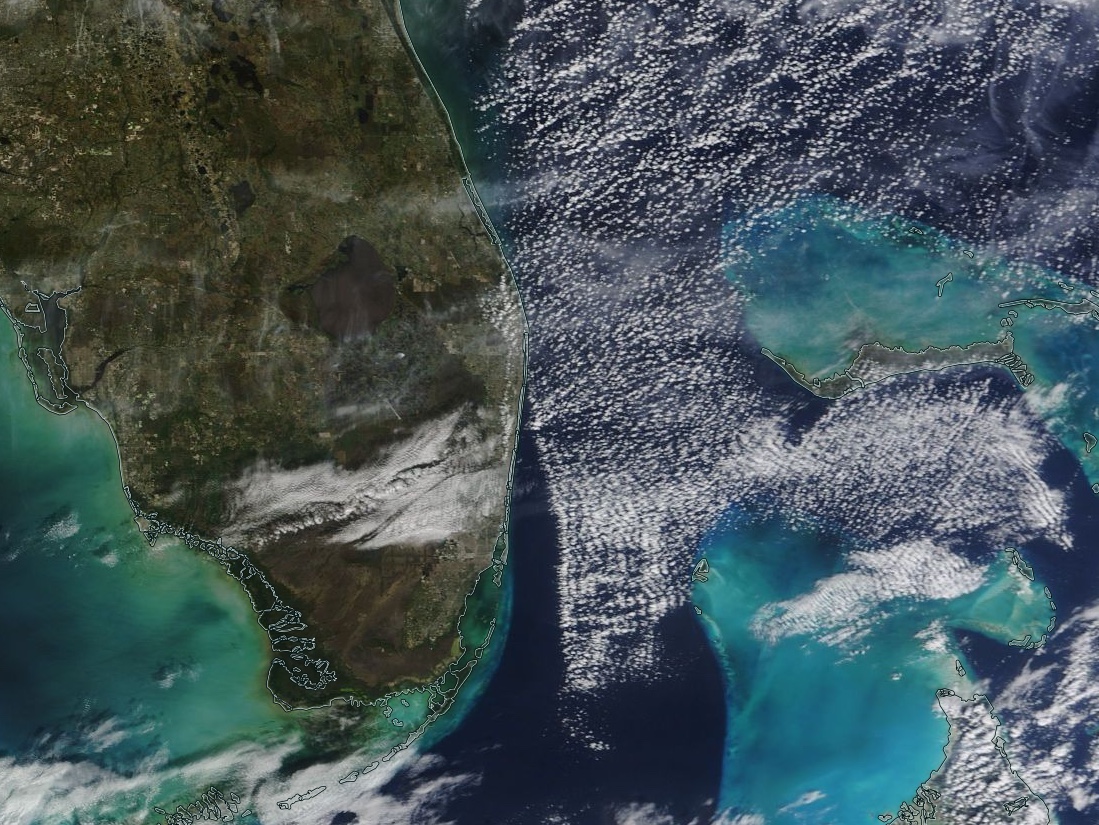 Check out the nearby fallstreak! 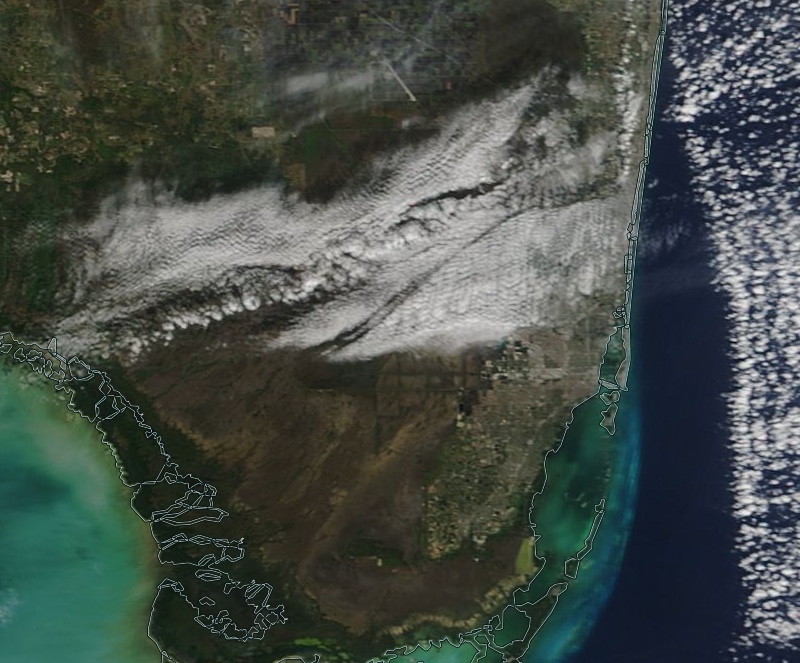 Vero Beach . Northeast of the Lake Okeechobee (The Big Lake )

Not sure around the 21st of Jan ? afternoon , pretty sure we had a cold front come in on that day .http://lance-modis.eosdis.nasa.gov/imagery/subsets/?subset=USA8.2015021.aqua.1km 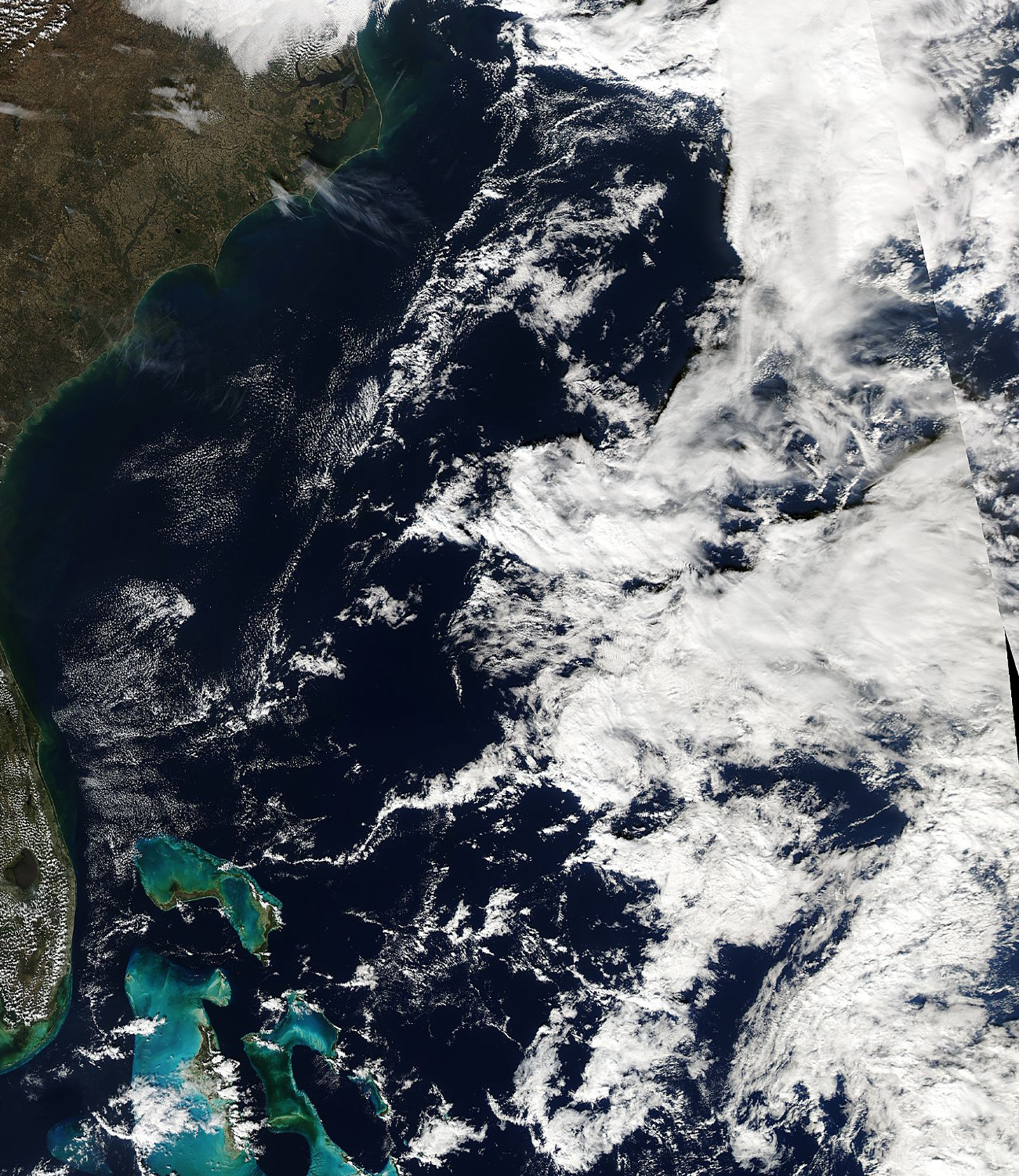 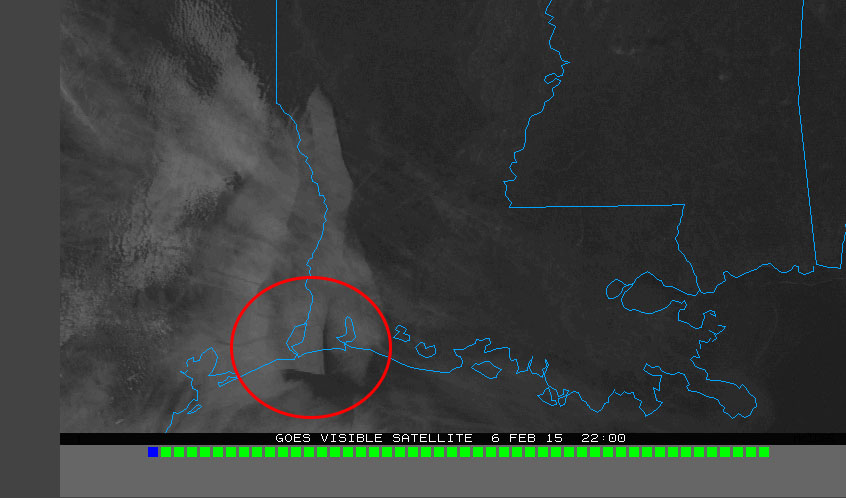 Joe's image is "looking east over the Atlantic", whereas the reddit image is on the Louisiana coast, Gulf of Mexico.

The edge of the cloud seems to follow the Texas-Louisiana state boundary, which lies along the Sabine river. I wonder whether they are somehow related.

Are any of these claims true? 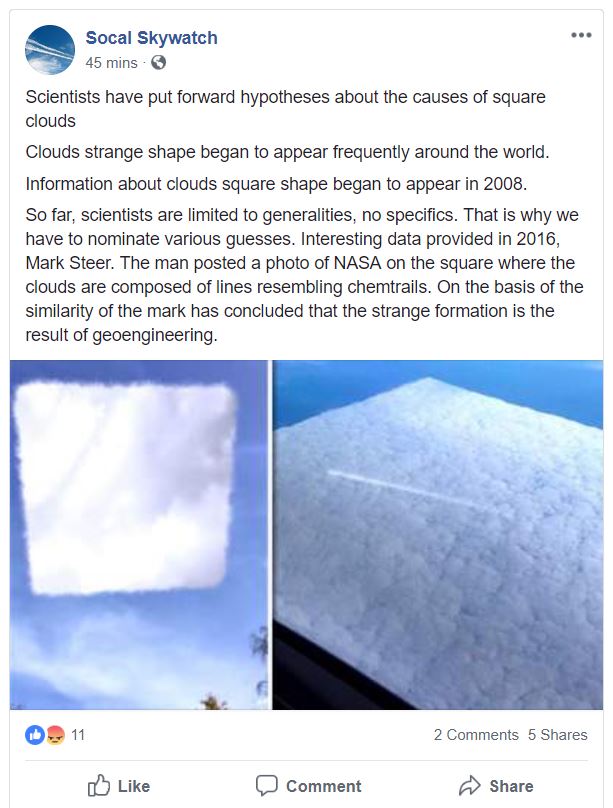 Critical Thinker said:
Are any of these claims true?
Click to expand...

"Scientists have put forth forward hypotheses about the causes of square clouds"
they have. https://www.metabunk.org/explained-flying-carpet-rhombus-shaped-cloud-in-exeter.t4122/


"Clouds strange shape bean to appear frequently around the world."
too ambiguous a statement. began when? Define frequently.

"Information about clouds square shape began to appear in 2008"
again, I don't know what this statement means. Does he mean scientific explanations or .. people only started seeing them in 2008?
This guy remembers them in the 1960s

In elementary school once they showed us a movie (a cause for excitement in the 1960s) about weather and storms. One brief section made an impression which stuck vividly in my memory. (Admittedly, a vivid memory is not necessarily an accurate memory! Meteorologists out there can tell me if I'm off my rocker here. Maybe even somebody knows this exact film.) The narrator mentioned that hail storms often come from oddly shaped clouds. Then the film showed a stormy-looking sky and the narrator said, "This square-shaped cloud brought a very destructive hail storm to (such-and-such mid-western state)." A square cloud, eh? How weird. http://www.donaldsauter.com/the-most.htm

Content from external source
"Mark steer data: "
he has it pinned now.
https://twitter.com/steermark?lang=en 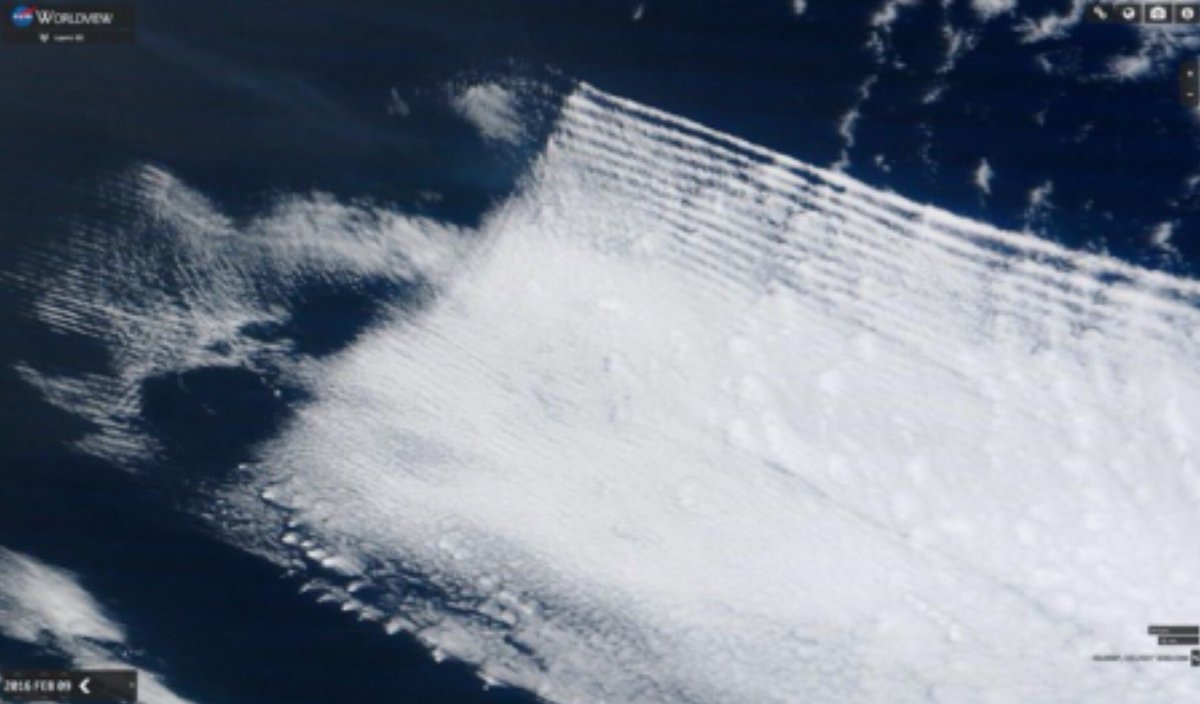 Critical Thinker said:
Are any of these claims true?
Click to expand...

I'd try to focus on evidence, rather than claims. Claims without evidence can generally be ignored.

Most of the "square" clouds that people post about are just a corner, with fairly straight lines, and a fairly well defined corner (quite rare for it to be actually 90°).

The "cloud" on the left here appears to be fake. 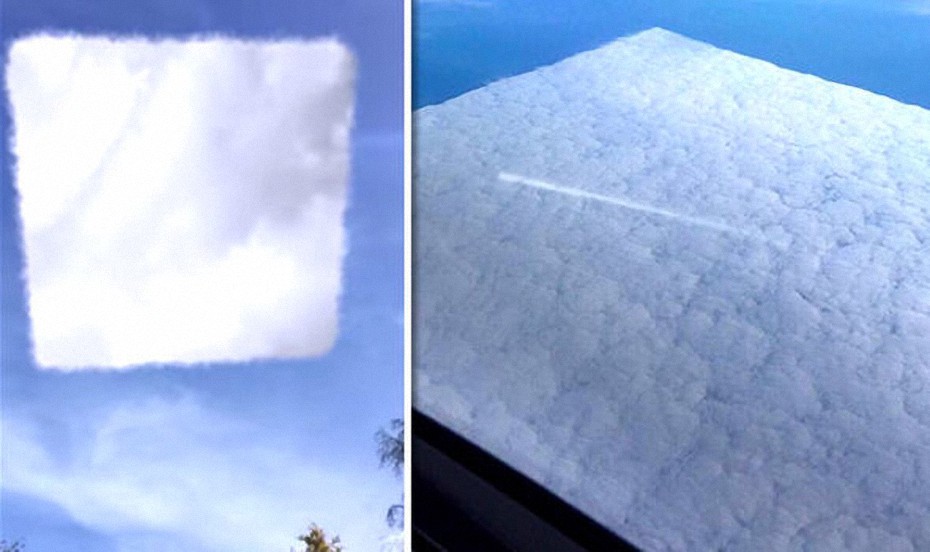 The cloud on the right was discussed above:
https://www.metabunk.org/posts/143775/

Staff member
I saw this from the train this morning in west London. Not a square cloud but a square-edged hole in the clouds. At least one edge appeared to be formed by a contrail. I couldn't get great photos due to the direction the train was travelling, and the reflections on the windows. 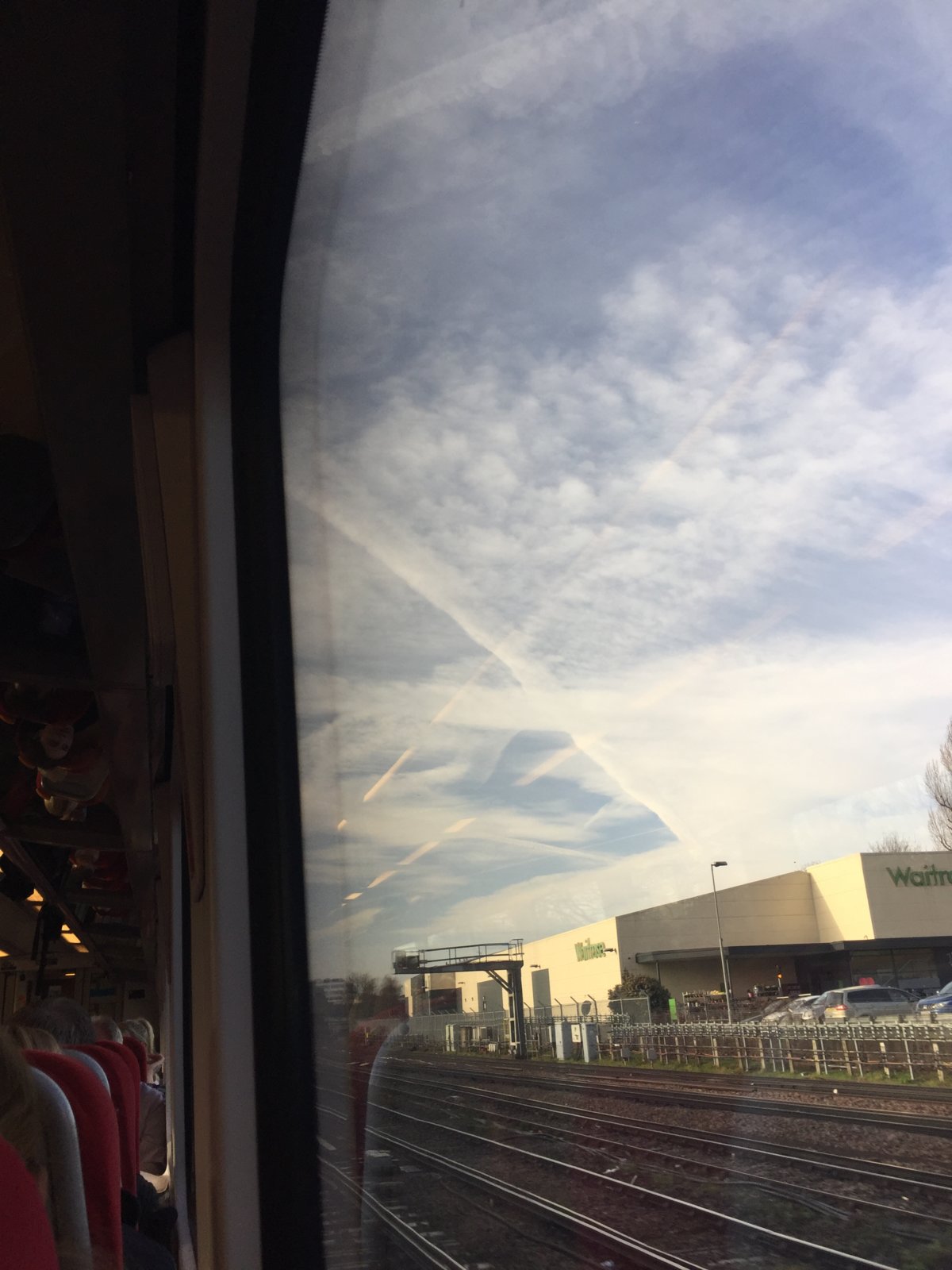 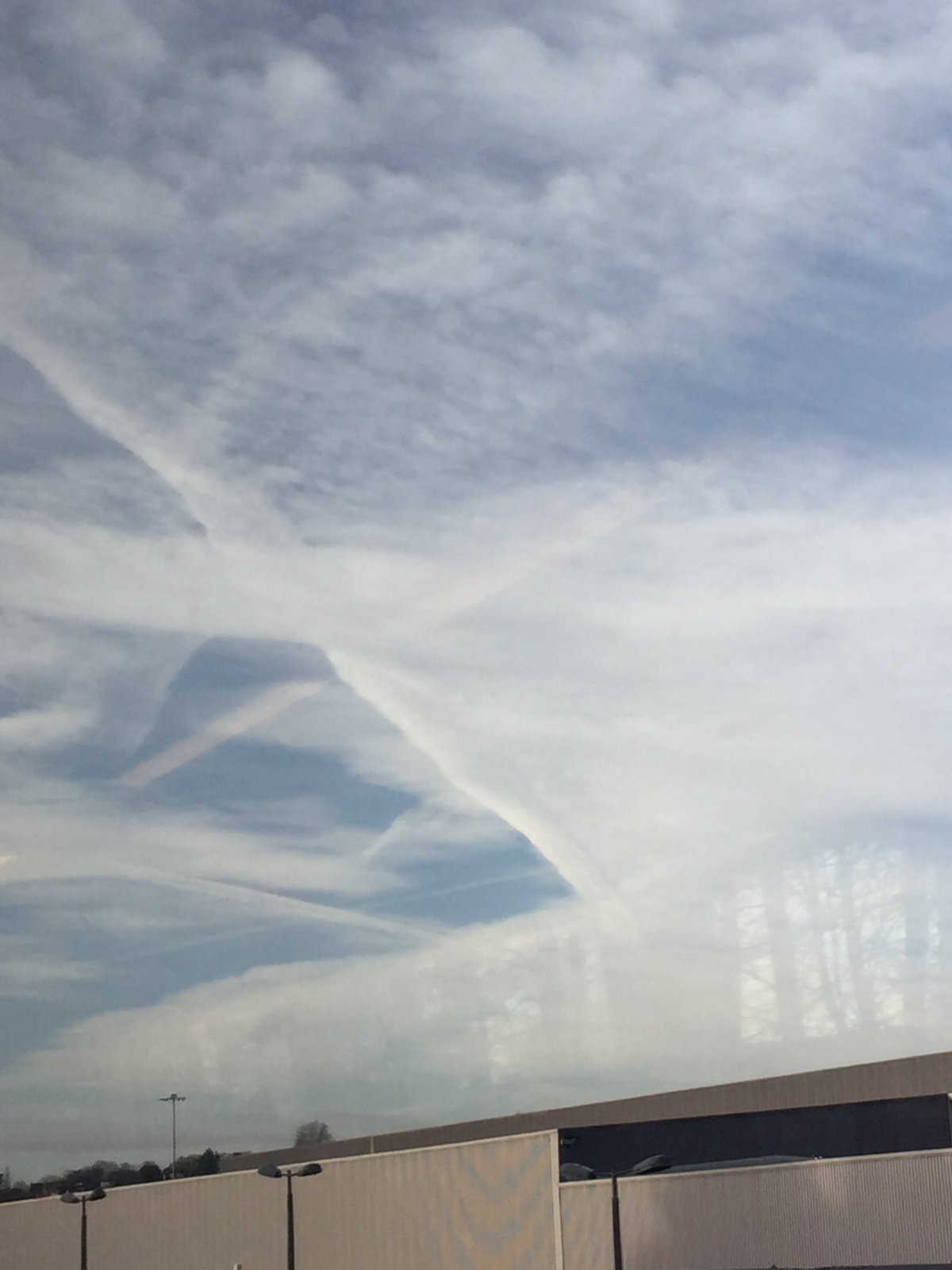 Looking at the photos I’ve been just noticed another less defined square “hole” which seems to be formed from a contrail grid, above the one I was focusing on: 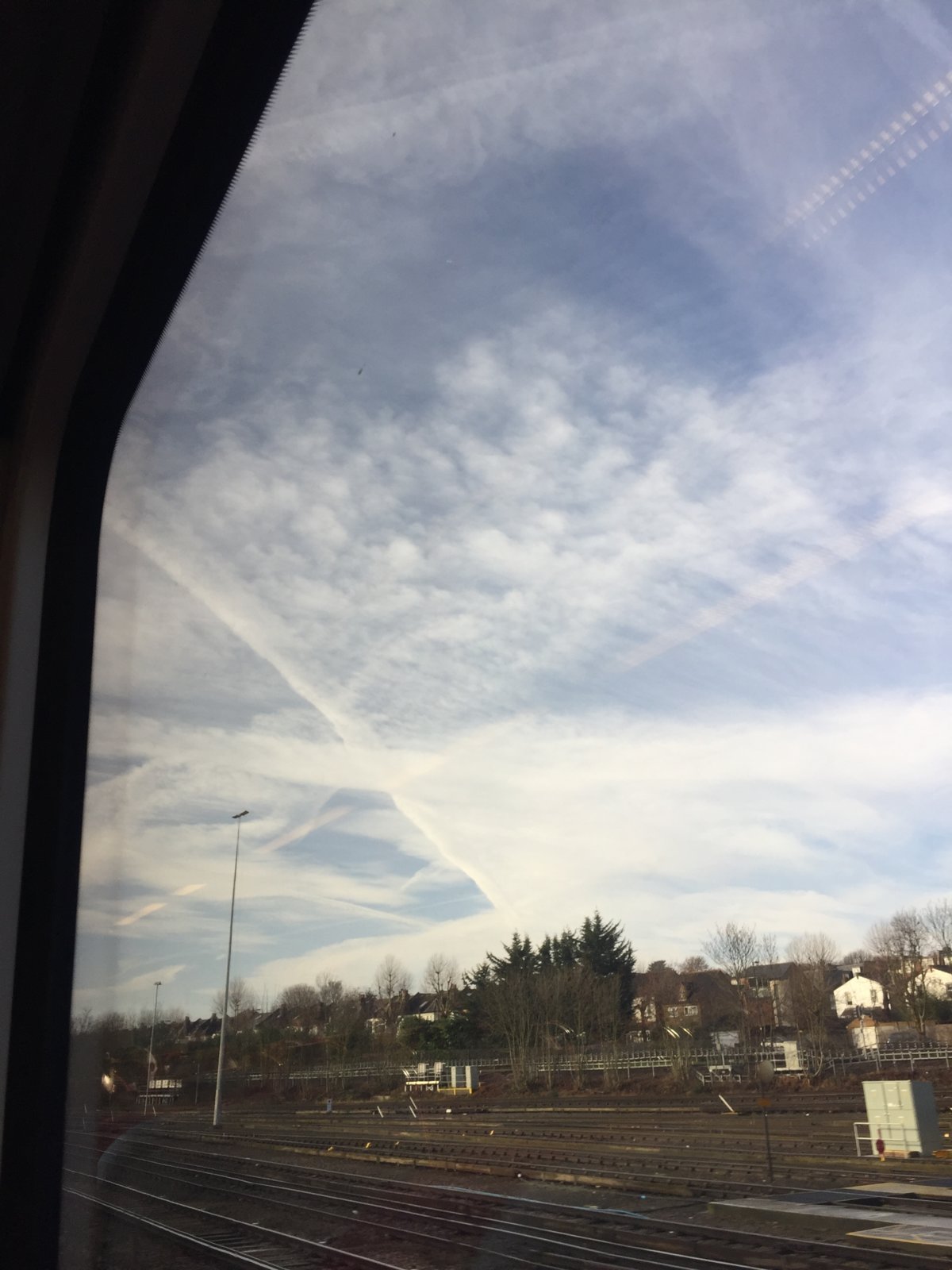 Satellite image from today - some time later than my photos. Lots of contrails among the cloud. This might be the same hole, having drifted northeast with the wind? 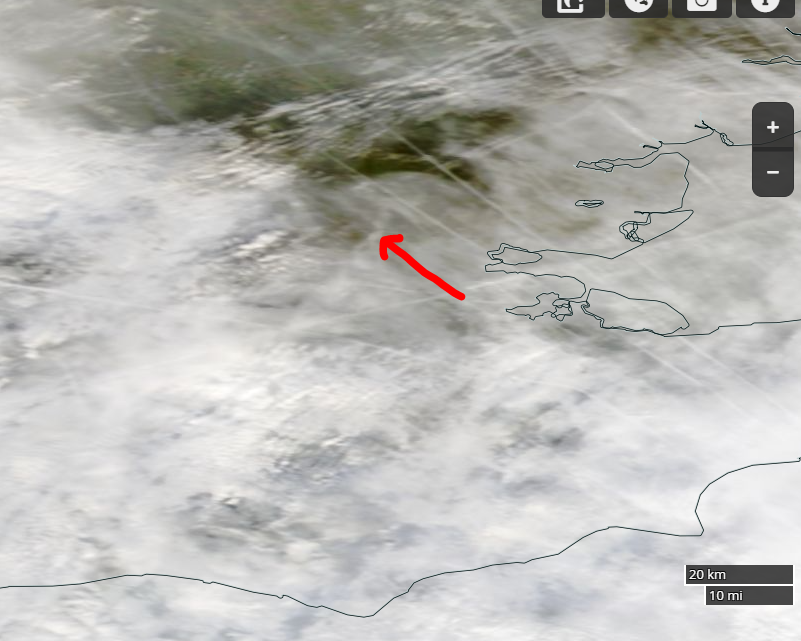 The photos you posted are mind blowing!

I was sent this photo + exif data by a friend of mine who was driving towards Davenport, Fl: 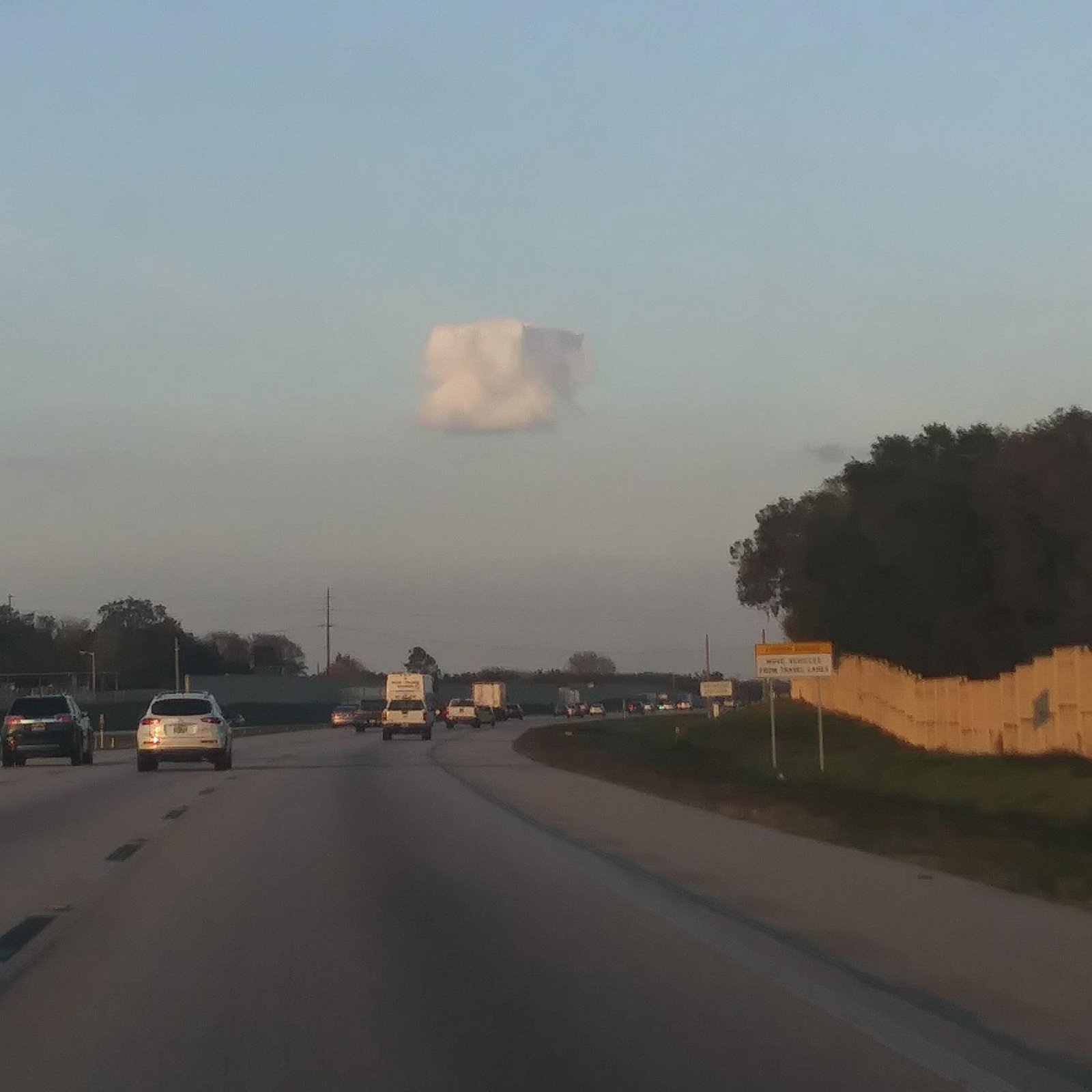 The photos you posted are mind blowing!

I was sent this photo + exif data by a friend of mine who was driving towards Davenport, Fl:

That one’s an interesting one, albeit with a different cause than the others in the thread. I suspect that cloud is the result of the Lifted Condensation Level (the height at which air lifted from the surface cools enough for clouds to form) occurring just a few thousand feet below a strong cap (a layer of stable air that acts as a lid on weaker updrafts), which would trap the visible cloud column between two relatively flat surfaces.

I wouldn’t be at all surprised to find that cloud sits atop an updraft with an anthropogenic source, like a smokestack, which would increase the humidity as well as provide lift, and explain its isolated nature.
Last edited: Sep 8, 2019
You must log in or register to reply here.