SpaceX Falcon 9 Captures Video of its own Contrail from Space

I'm new to metabunk.org and I might be the only one here that places a claim against himself.

While I was lens converting Falcon 9 Rocket footage from fisheye lens to standard, I stumbled upon something that has no reasonable explanation. Missive Snake-Like UFO dozens of miles wide?

I'm not ufologist, but I had to make the video for everyone to see.

Here is the original video of Falcon 9 rocket entitled ''Falling Back to Earth HD Footage From Space''
["snake" footage starts at 1:30]


At first glimpse nothing out of the ordinary, [user's video removed as it is unnecessary to the question]

But while I was double checking the horizon for barrel distortion something caught my eye under the Sun above Earth: 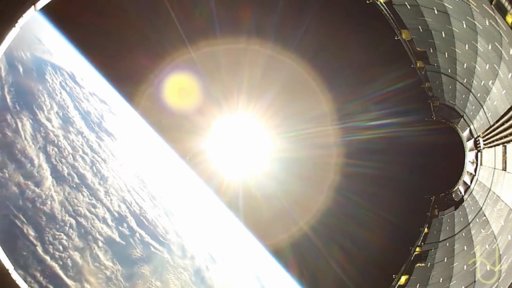 I decided to zoom in to see what it was and my jaw dropped. 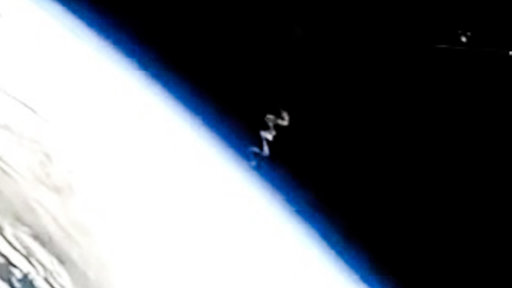 I don't think it's smoke from rocket boosters, because it's above Earth's ozone layer and if Falcon 9 was at least 200 miles distance from Earth, that means that the sighting was at least 1200 miles away.

From that distance smoke trail from rocket boosters shouldn't be that big.
Falcon 9 was in reentry when the footage was made, so the sighting shouldn't be from the rocket itself.

Distance to the object in order to be visible indicate that it's massive, too big for smoke trail.
Also it has triangular shape in the middle and below and above the triangle, curved snake-like symmetrical ''body''.

Please analyse the footage and explain to me what that is.
​

It's the contrail from the rocket launch... Nice find though.

If it's contrail from the rocket launch then why that contrail has remained for at least 5 hours 49 minutes?
Because to my understanding Falcon 9 was descending after Peyload separation. 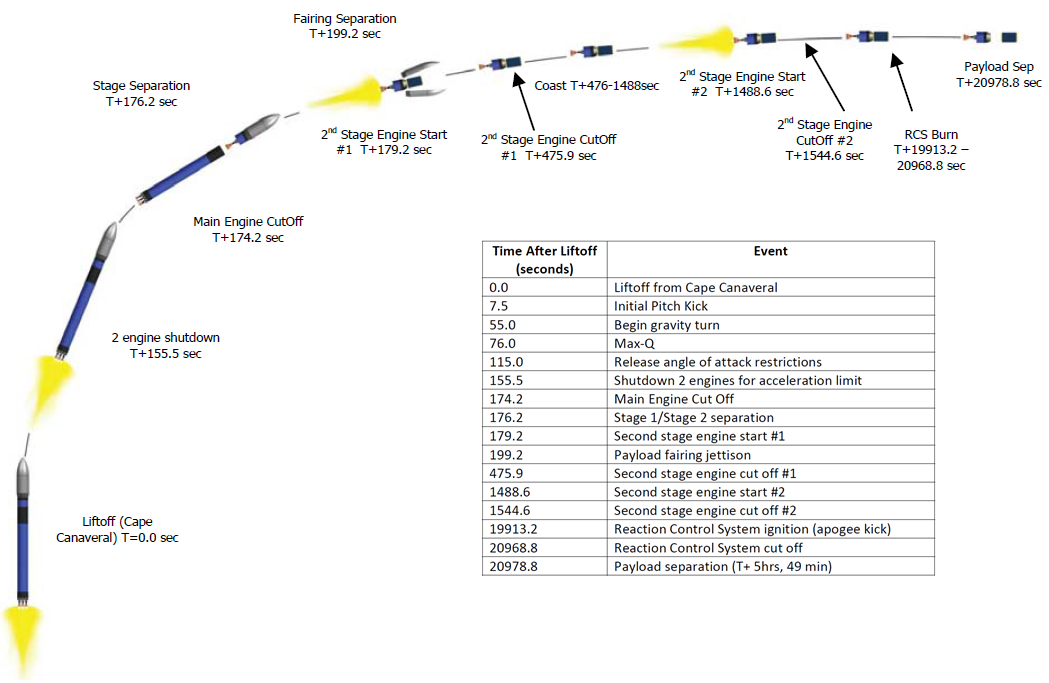 Also distance to the sighting indicates that it's quite a big contrail.

The camera is in the payload fairing. But the fairing doesn't ride with the spacecraft until payload separation as you might expect. It gets jettisoned about 4 minutes after launch.

Edit: 199 seconds - per the graphic you included in your post.

I've found an article which explains this very mission:


SpaceX released a spectacular video from a camera installed on the Payload Fairing of the company’s Falcon 9 rocket that recently launched a communications satellite for the country of Turkmenistan. The video was retrieved from a GoPro camera fastened to one half of the payload fairing of that mission after it had washed ashore and was discovered by beachcombers in the Bahamas.

The fairing debris was discovered in the surf off the coast of Elbow Cay by a group of tech company executives from South Carolina on May 29. From labels on the debris it was clear that the piece originated from a SpaceX rocket. Kevin Eichelberger Tweeted photos of the group’s find and quickly got a response from SpaceX CEO Elon Musk thanking him for the photos that could be “helpful for figuring out fairing reusability.”

Attached to the fairing was a camera housing facilitating a GoPro Camera which Eichelberger agreed to send back to SpaceX. The decision of attaching a GoPro camera to the fairing is rather curious as the camera – unless there is a special setup in place – will only record video in its memory to be later pulled off a data card which in most cases will be impossible since only a few payload fairings are actually recovered by chance. Nonetheless, SpaceX must have gone through the necessary precautions of using special GoPros which store collected video in an encrypted format that could only be pulled off the memory card by SpaceX in compliance with U.S. regulations such as ITAR.

By June 3, SpaceX came forward with news that the company would be dispatching a team to Elbow Cay to retrieve any hardware that was found for inspection and safe disposal after the beach finding had made the local news as a problematic piece of waste that could have been costly to dispose of locally.

The video from the camera fastened to the fairing half was released by SpaceX on June 5 under the title “Falling Back to Earth.”

Z.W. Wolf said:
It's the contrail from the rocket launch... Nice find though.
Click to expand...

I concur. Backlit but bright this is not an opaque object but aerosol. Mie scattering are predominantly forward.

StarGazer said:
At first glimpse nothing out of the ordinary,
Click to expand...

are you pushing for youtube views? the contrail is clearly visible in the original video. I have removed your videos as they are unnecessary to the question. 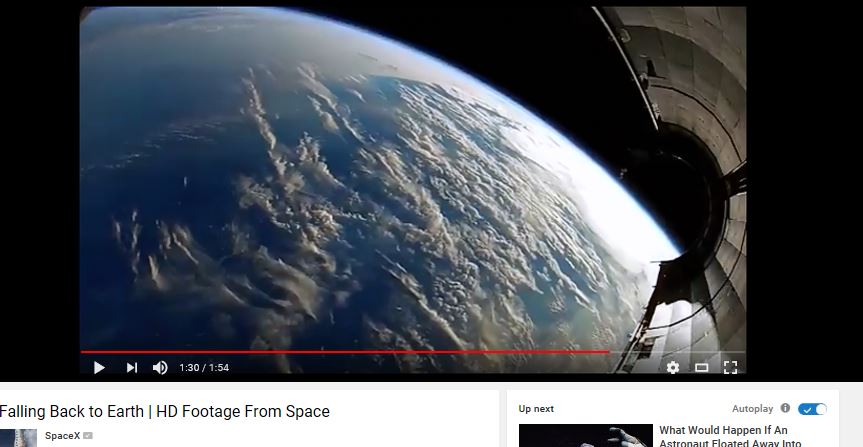 But don't feel bad. This is a very nice find. A rocket trail photo from space is rare or maybe unique. I've never seen one, anyway. 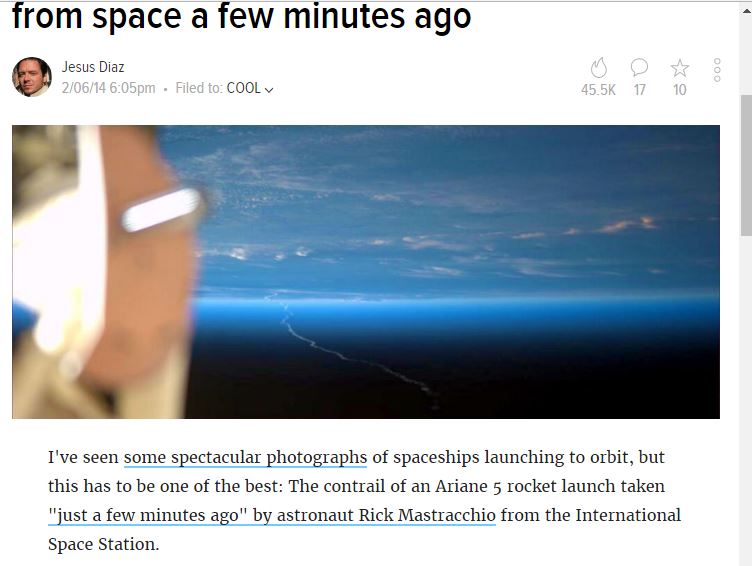 Z.W. Wolf said:
This is the same launch and the video was published in June, 2015
Click to expand...

Interesting that in the description the uploader casts some doubt on whether an earthling-made trail should look like that:

I assume it's the Space X rocket, but could also be some other craft leaving the planet. The trail should be straight, but the pig tail curl of it is very confusing. I'm not sure but I don't believe typical rockets leave a curve like that.

However, in response, a commenter shows that such 'pig tail curled trails' are normal by linking to a Japanese rocket launch (from 2:43):

Here's another one with even crazier trails than those, and you get to see how they move/form: 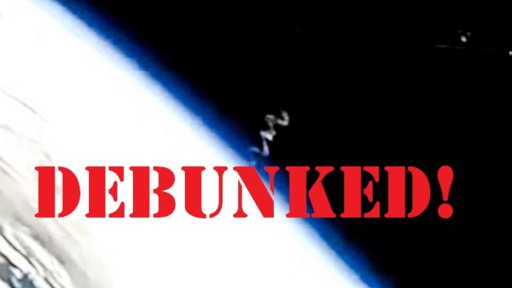 Thank you very much guys. To me that's a 100% Debunk
Video has been deleted.

You guys blow my mind and how quickly you responded.
It's going to be a nice addition to metabunk.org

Your forum is the best out there with the best researchers.

I hope you didn't took me as a loony

Have a great day and see you in other threads

I was aware that you guys might think that I'm pushing for YouTube views, but since I'm new here, I wanted to share my finding in sequence, explaining myself how and why I made the final (now deleted) video.
Since I like to lens convert videos from fisheye to standard, before upload on YouTube I check the horizon by frames for barrel distortion, so I posted the original, then the lens corrected version, so that you guys can see that I'm actually doing that.
So the postings of the videos were more in my defence than promoting.
Sorry about that and thank you for modifying the thread.
From now on I'll post mainly gifs and jpgs.

Just something I wanted to emphasise while on the subject of YouTube views.
FE and concave earth started with YouTube and to my opinion it will also end with YouTube.
So the more videos all of us make, the sooner this insanity will end.
Last edited: Aug 31, 2017

StarGazer said:
So the more videos all of us make, the sooner this insanity will end.
Click to expand...

Dairdre
You are right again
I wouldn't had made the thread if I was 100% convinced that it was UFO, that's why at the end of the deleted video I put " To be continued..."
I'm being an example for anyone who claims something and has the guts to admit that has been debunked.
From now on if I find anything strange I'll open a thread before I rush into conclusions.

StarGazer said:
From now on if I find anything strange I'll open a thread before I rush into conclusions.
Click to expand...

we do have a forum called "what's that thing in the sky" ... so the PGs don't require a claim per se.

I'll check it out and post there if I see something weird
You never know
You must log in or register to reply here.