Mick West said:
Here's a timelapse of the moon from the ISS.
Source: https://www.youtube.com/watch?v=S7bq2s-_SAE
Click to expand...

Mick West said:
The human eye is much closer to a 50mm lens
Click to expand...

Sorry if this is a little bit pedantic but as someone who owns a DSLM (basically a DSLR but without a mirror) I've always considered the human eye to be more like a camera with a 16mm lens attached and a sensor that can move left or right. 50mm lenses have a slightly closed in field of view which means their peripheral vision tends to be closer to the middle of the lens, if you try and get your hand to show up from the side of the shot whilst also keeping it to the side of the lens you'll find that the only way for that to be possible is to slightly cover the lens. The peripheral vision of a 16mm lens however tends to be a good bit further, which means you can get your hand to show up in the shot without it covering the lens. As for my analogy about the moving sensor, while the human eye generally sees in a way that feels like 50mm we're still able to see things that are on the far left or right side of our eyes without those things needing to cover our eyes, and instinctively our eyes will move to see what those things are with more clarity.

Sorry if my vocabulary seems a bit rubbish, I might try and make some visuals to clarify what I'm trying to say if I feel it's necessary.
Y

You are showing me a timelapse where we can see the Moon.
You show me pictures where we see the moon.
Yes, we see the Moon.
But my question is about the live images.
Look, if I'm not mistaken, this is live from the space station ??
At times, I can see stars, but still not the Moon.
And indeed, when I see space on this live, it's only about 20% of the screen, the remaining 80% is Earth.
And so the probability of seeing the Moon exists, it is a certainty, and yet during all the direct ones, whether it is this year in 2021, or even the previous years, the Moon does not appear.
Where did my question come from?

Yek said:
And so the probability of seeing the Moon exists, it is a certainty, and yet during all the direct ones, whether it is this year in 2021, or even the previous years, the Moon does not appear.
Click to expand...

There must have been thousands of hours of livestream from the ISS. My suggestion would be to look through that and see if you can find the moon.

Rory said:
There must have been thousands of hours of livestream from the ISS. My suggestion would be to look through that and see if you can find the moon.
Click to expand...

Or he could do the maths. Neither of the orbits disobeys Newton's laws of motion to any significant degree. Except when the aliens are using their tractor beams, of course.

FatPhil said:
Or he could do the maths.
Click to expand...

Wouldn't the maths predict that the moon would show up in the ISS livestream? (After all, the sun does.)

JMartJr said:
There, I did science, that's enough work for one day.
Click to expand...

Yek said:
yet during all the direct ones, whether it is this year in 2021, or even the previous years, the Moon does not appear.
Click to expand...

Are you sure? Have you looked at all of them?

I looked at photos just to get a rough feel for how often you might expect to see the moon in the frame of a camera shot. Roughly speaking, it should be uncommon but not totally absent, although there MIGHT be a fixed camera on the ISS that is looking permanently away from where the moon (and the Sun) might be visible, so you'd never see them from that camera. But before diving too deeply into trying to figure out why the moon is NEVER in ISS videos, you'd need to demonstrate that it never is.

This might be part of the answer -- a clip from the live feed showing the Sun, moon and Venus rising, and showing adjustments to the camera that makes the brightness of the moon and Venus, at least in this vid, look MUCH brighter, compared to the Sun, than they would to the eye. In other words, some shots of the moon in the feed may be mistaken for the sun, depending on cmera settings.

Yek said:
And indeed, when I see space on this live, it's only about 20% of the screen, the remaining 80% is Earth.
Click to expand...

Since the camera is pointing at the surface, you'd need to find the moon rising or setting for it to be near the horizon. For that, you need the camera pointing east or west; right now it seems to be looking northeast.
This may be done so the camera does not look directly at the sun; does it do that?

If the camera does show the sun, well, the ISS orbit takes ~90 minutes, so if d=number of days since the last new moon, the moon should show up ~d×90/29.5 or d×3.05 minutes after the sun does (or you can use "before" for both), give or take a few minutes maybe because of orbit irregularity. 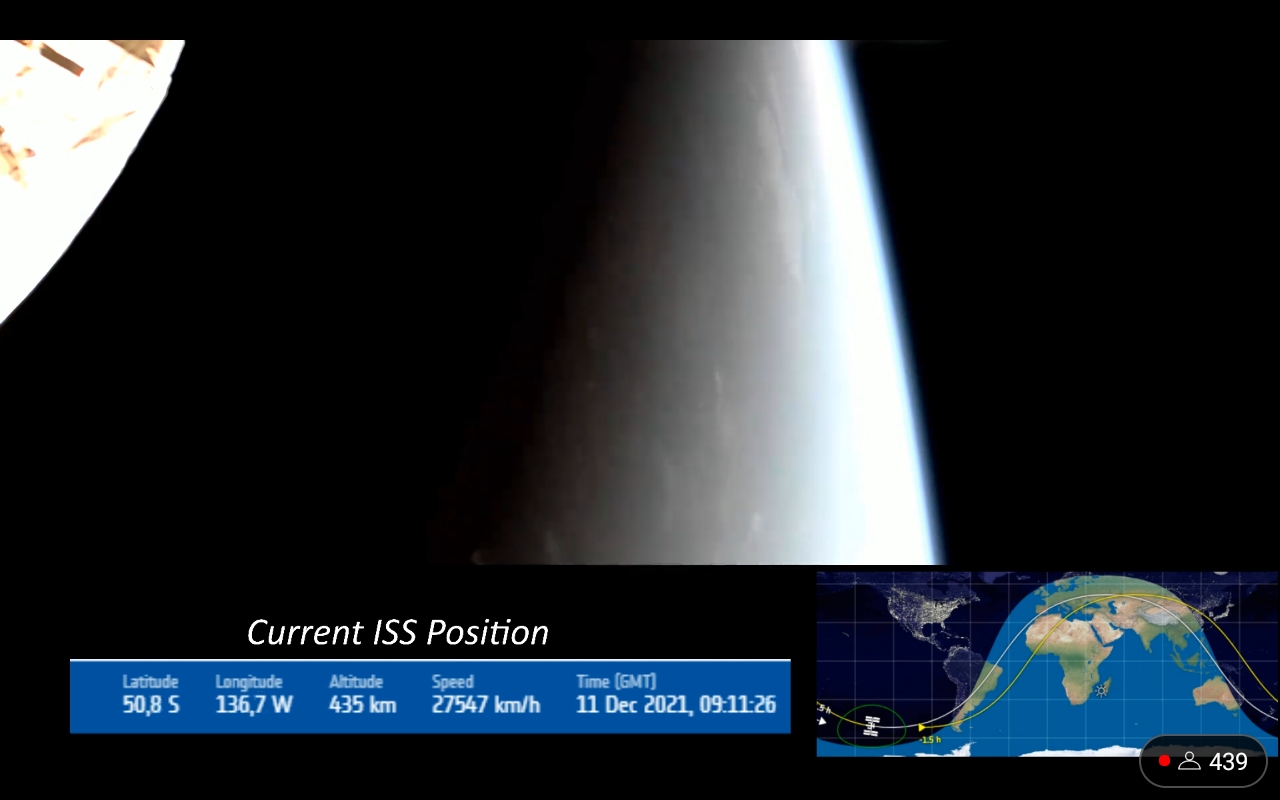 Obviously I couldn't watch all the videos live, I couldn't.
To my knowledge, I do not know anyone who told me to have seen the Moon, during any direct, and I understand that the probability is low, as you point out very well Mendel.
I see that there are many of you here, and I see that none of you have seen the Moon in any direct from space.
This brings me to a new question.
Many amateurs around the world film the Moon from Earth.
And to my knowledge, and I may be wrong, I have never seen an astronaut equipped with digital cameras, film the Moon and even the Earth during a live.
Being French, I have always followed Thomas Pesquet, and I have never seen him film the Moon and the Earth live.
I think it would be great to see the Earth or even the Moon live. I would take full eyes. It would make great pictures. Imagine they are zooming in, zooming out on the Moon or especially the Earth.
I never understood why he doesn't, and no one even asks him during lives.
What do you think ???

Yek said:
I see that there are many of you here, and I see that none of you have seen the Moon in any direct from space.
Click to expand...

I don't generally look at the live feed.


Yek said:
And to my knowledge, and I may be wrong, I have never seen an astronaut equipped with digital cameras, film the Moon and even the Earth during a live.
Click to expand...

But you know how it looks? and you know the ISS is in a rather low orbit compared to the size of the Earth, so that live feed is pretty much what it looks like "zoomed out".

So, from the ISS, the moon actually looks like it does from Earth itself, the ISS being 0.1% closer than we are but zooming around the planet, whereas every amateur astronomer on the ground can comfortably put their telescope on an equatorial mount and capture the moon.

I understand that you'd find it neat, but I'm not sure others see the point? 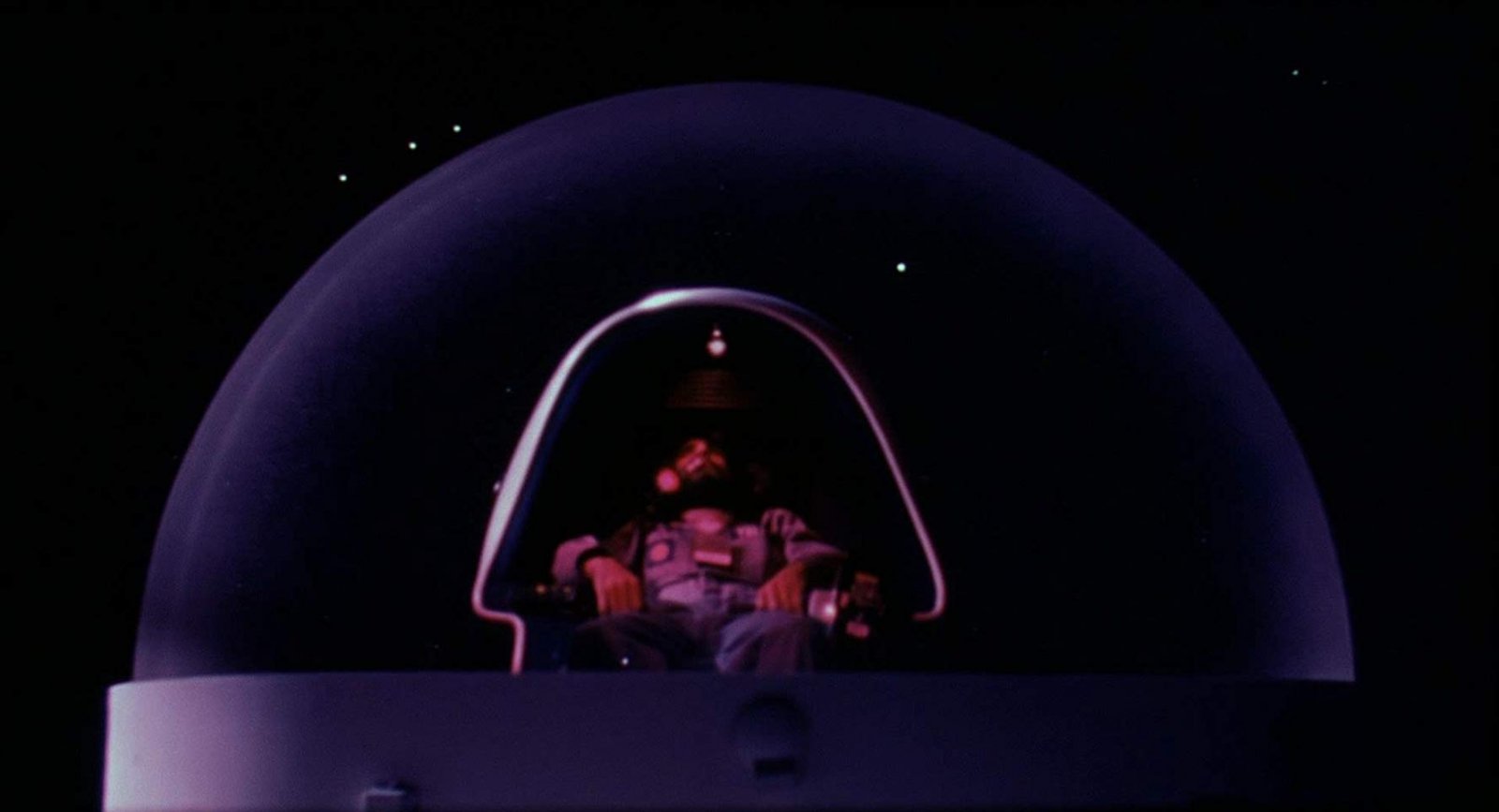 
Russian cosmonaut Sergei Kud-Sverchkov on Tuesday published footage of the Moon setting filmed from the International Space Station (ISS).
The video shows how the Moon gradually flattens and then completely vanishes in the dark. “Its reflected light passes through the Earth's atmosphere and gets distorted. The Earth's horizon itself is invisible - everything happens at night. Therefore, it seems that the moon magically dissolves in the air," the cosmonaut wrote in the caption of the video on VKontakte.

Stay away from the airlock, Talby.
You must log in or register to reply here.