Early Monday afternoon, ABC News reported the suspect was found dead in a vehicle in Sullivan County, New York, apparently from a self-inflicted gunshot wound. He was reportedly an attorney who'd had a case before Salas in 2015. A FedEx package addressed to Salas was also found in the vehicle, according to the ABC sources.

Original story: The son of U.S. federal judge Esther Salas was shot and killed at her home Sunday afternoon by a man dressed as a FedEx delivery driver.

Salas’s husband, defense attorney Mark Anderl, was also shot during the incident, which took place at the family’s home in North Brunswick, New Jersey, at around 5 p.m. ET on Sunday. Salas reportedly escaped injury because she was in the basement at the time of the attack, according to a report from NBC New York.

She is a former public defender who was nominated to the federal bench during the term of former U.S. President Barack Obama in 2010. She was recommended to the position by New Jersey Sen. Bob Menendez, who knew the family. Just last week she was appointed to oversee the Deutsche Bank case involving Jeffrey Epstein, and she previously handled the high-profile case involving Teresa Giudice, a star of "Real Housewives of New Jersey," who along with her husband Joe was sentenced to jail for financial fraud in 2014.

The suspect has been identified as "anti-feminist" Roy Den Hollander, who had public disagreements with Salas. He was an eccentric, somewhat conspiracy theorist.
https://heavy.com/news/2020/07/roy-den-hollander/

Hollander, 69, was long involved in unusual and publicity seeking men’s rights causes. In 2016, Hollander sued various national news reporters in the U.S. District Court, Southern District of New York, including Chuck Todd of NBC’s Meet the Press, New York Times’ commentator David Brooks, and Major Garrett of CBS. He accused them of violating the Racketeer Influenced and Corrupt Organizations Act by allegedly committing “wire fraud” because he wrote they created and caused “to be broadcast and disseminated false and misleading news reports concerning the Donald J. Trump candidacy for President of the United States.”

Likely conspiracy theories will be that Salas was attacked to avoid exposing an elite pedophile ring associated with Epstein, and that Hollander was a convenient Patsy. 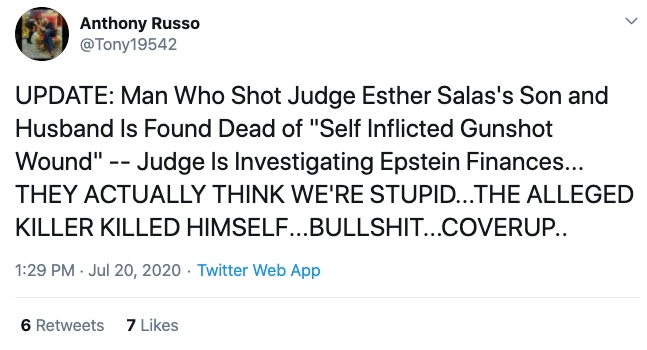 Sep 18, 2020
peweet
P
T
Claim: A Mariupol hospital was hiding members of the Azov Battalion, and other claims by Russia
2