first post on the forum, I hope everyone's doing well

So, I understand that the selenelion lunar eclipse is caused by atmospheric refraction..


A selenelion or selenehelion occurs when both the Sun and an eclipsed Moon can be observed at the same time. This can occur only just before sunset or just after sunrise, when both bodies will appear just above the horizon at nearly opposite points in the sky. This arrangement has led to the phenomenon being also called a horizontal eclipse.

Typically, a number of high ridges undergoing sunrise or sunset can view it. Although the Moon is in Earth's umbra, both the Sun and an eclipsed Moon can be simultaneously seen because atmospheric refraction causes each body to appear higher in the sky than their true geometric positions.[4]

or if Mick could do a short video on it, that'd be a great help when these flat earthers struggle to understand.. which for once, is actually understandable, many of us globers struggle to explain it too

I get it, but I like to be able to cite sources too

thanks guys
(if you're interested, go watch Mick's interview with me on his YouTube channel)
Last edited: Sep 9, 2020

Johnny Orbital said:
I'm just struggling to find sources explaining the direction of the shadow in more detail than I can muster up
Click to expand...

There's nothing particularly special about the direction of the shadow motion for a selenelion lunar eclipse. It's the same basic geometry for one that happens during the hours of darkness, just with some added refraction. So really the question should be how to explain the direction of the Earth's shadow motion in ANY eclipse. Still, we could focus on the example you give, of an eclipse occurring at moonrise (just as the sun is setting)

It is, as you said, understandably difficult to understand. The simple way I picture it myself is to imagine the shadow of the Earth as a dark disk cast on the celestial sphere (the imaginary sphere, very far away that the stars move in).

Try to ignore the rotation of the Earth for now.

The moon is creeping slowly across the celestial sphere at a rate of one full 360° every 28 days (about 13° per day). The Earth's shadow is also moving across the sphere, but much slower, once every 365.25 days, or about 1° per day. So the Moon is moving at 13x the speed of the Earth's shadow. We can start to imagine it simplified as that shadow not moving, being fixed in the celestial sphere (the stars) and the moon simply going through it.

What would REALLY be helpful would be a video where the celestial sphere (the stars) was fixed, and we see the moon travel across it, through the earth's shadow. Something like this.
Source: https://www.youtube.com/watch?v=1zJ9FnQXmJI&feature=youtu.be


The problem is that it's difficult to make such videos, and so videos of eclipse tend to with be fixed on the moon, or fixed on the earth itself. And in both cases we can't see stars.

Thanks Mick, it's just I've got a guy giving it the 'the shadow shouldn't start at the top of the moon' line.. and it's actually the sunrise selenelion, not the moonrise one I'm trying to explain to him

that equatorial mount absolutely mesmerises me every time!

I know we discussed the selenelion on the video we did, and I feel like I AM explaining it perfectly to him.. he also seems to have some basic knowledge of physics which leads me to believe he's just being difficult

I might just try making a video for him, a ball in each hand, move the moon ball up slowly, rotate the earth ball slowly and show him that even though the moon is moving relatively upwards into the earth's shadow, that due to the rotation of the earth, the moon can appear to be moving downwards relative to our perspective from the earth

it's so much easier being a flat earther; FAKE!! and onto the next lol

I hope I made sense here

Johnny Orbital said:
Thanks Mick, it's just I've got a guy giving it the 'the shadow shouldn't start at the top of the moon' line.. and it's actually the sunrise selenelion, not the moonrise one I'm trying to explain to him
Click to expand...

we have an illustration here showing how such a lunar eclipse can occur, even if the shadow is eclipsing the top portion of the moon, and still end up with plenty of wiggle room in the geometry. 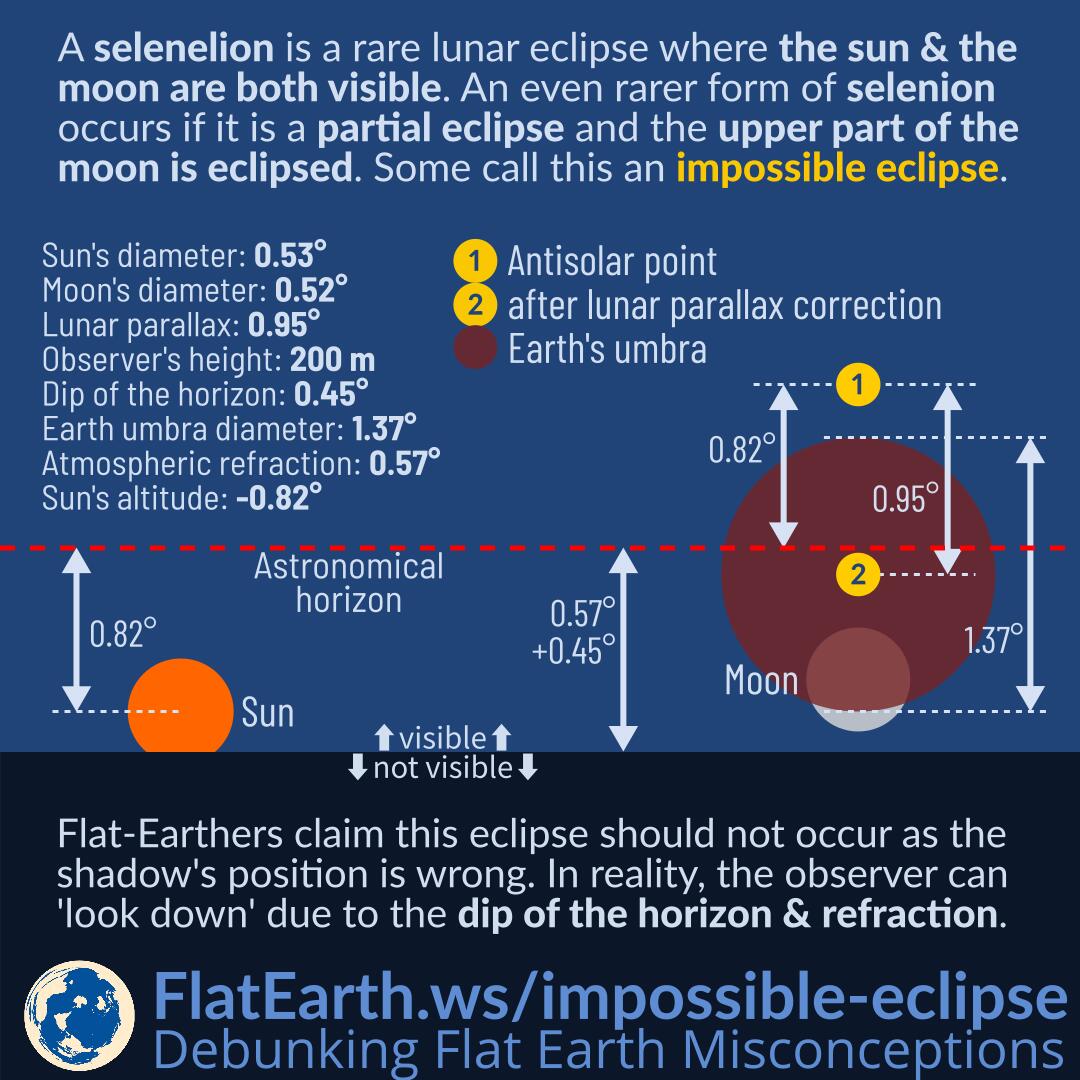 Eclipses and the Saros Cycle