Seen this guy before?? (Russ Tanner)

He's really got it bad.

Traveling throughout the United States by land and by air in 30+ years and seeing many thousands of jets - both civilian and military - in the north and south - in the east and west - over land and over water - during every conceivable weather condition, I have never seen a trail come out of a jet. Not once. Not ever. Never!
Click to expand...

I wrote him once and he described following the trails northwards one day to "find out where they are coming from". He followed them up to the NE tip of Maine and saw them heading out towards Europe. I explained that this was transatlantic traffic, but he would not understand the Great Circle concept.

Holy smokes. That's all i can say. This stuff always knocks me back a few steps. I'm fairly new to this warped world of conspiracists. I just don't seem able to get used to people so detached from reality. I went to his home page (http://russtanner.com/) and it looks like this guy is just completely paranoid about everything outside his basement. I kept looking for the link to some product he was selling, but i couldn't find any, which makes his paranoia even scarier.


He seems to have changed his tune from contrails are short, chemtrails are long to the new meme all trails are chemtrails regardless of how long they are.

He's rather happy to erase any verifiable info from his website that contradicts his assertions. He started a disinfo agent thread on Global skywatch specifically citing myself. http://globalskywatch.com/chemtrails/ubbthreads.php?ubb=showflat&Number=2206#Post2206
So I registered and provided a detailed and verifiable CV with links to IMDB.com, various film reviews Starwars crew lists etc and naturally he deleted the post as the reality contradicted the fiction he was trying to create.
IMO Dudes like that are more concerning than unwitting gullible followers of a conspiracy theory. They are unethical people who know they are selling snake oil and deliberately driving the hoax and modifying their fiction as awareness changes in the believers.
Folks like Peekay22 and Lasvegas Skywatch have introduced the realisation that the trails are coming from passenger jets so the hoax narrative will probably evolve in that direction for a while until the "short trails are chemtrails too" and "invisible chemtrails" meme spreads.
It's possible they figure the more outlandish they make the hoax will not necessarily reduce income, because only the more gullible folk will tend to buy their products anyway. The sillier the claims, the more targeted and selective the marketing is , weeding out the less credulous and less likely to BUY and focusing on the easily suggestible.

Staff member
I tend to think he is genuine, at least to a degree. I think the majority of these people do believe what they are saying. Sometimes they will throw stuff in because it simply sounds right, and they don't actually take the time to verify or question something. But they believe that what they are doing is broadly right, so the details are irrelevant.

They also don't think the same way you and I do. Their reasoning processes are different. They have a "crippled epistemology". What may appear to us to be an obvious falsehood, or even deliberate lying, might make perfect sense to them, and appear obviously true. In some cases there are also elements of mental illness.


But we have seen that in many communities and even nations, such theories are widely
held. It is not plausible to suggest that all or most members of those communities are
afflicted by mental illness. The most important conspiracy theories are hardly limited to
those who suffer from any kind of pathology.
For our purposes, the most useful way to understand the pervasiveness of
conspiracy theories is to examine how people acquire information.

For most of what they believe that they know, human beings lack personal or direct information; they must
rely on what other people think. In some domains, people suffer from a “crippled
epistemology,” in the sense that they know very few things, and what they know is
wrong.

Many extremists fall in this category; their extremism stems not from
irrationality, but from the fact that they have little (relevant) information, and their
extremist views are supported by what little they know.

Conspiracy theorizing often has
the same feature. Those who believe that Israel was responsible for the attacks of 9/11, or
that the Central Intelligence Agency killed President Kennedy, may well be responding
quite rationally to the informational signals that they receive.
Consider here the suggestive fact that terrorism is more likely to arise in nations
that lack civil rights and civil liberties.
An evident reason for the connection is that
terrorism is an extreme form of political protest, and when people lack the usual outlets
for registering their protest, they might resort to violence.
But consider another possibility: When civil rights and civil liberties are restricted, little information is
available, and what comes from government cannot be trusted. If the trustworthy
information justifies conspiracy theories and extremism, and (therefore?) violence, then
terrorism is more likely to arise.
Click to expand...

In other instances, plumes are shown coming from old turboprops (not jets) and are used to convince the public using an out-of-context deception. Additionally, the public is not told that water-injection was used in just a couple engine types during world war II to decrease take off runway requirements. Any additional water was afterward dumped to lighten the aircraft's weight.
Click to expand...

Next to a photo of B-17's. Are these the "turboprops" he mentions?

and did they carry water for injection? I've found a couple of references to it on the web, but nothing really definitive.

Even if they did have it, if they dumped any remaining water after takeoff it would have been immediately afterwards so as to lighten the load of the unnecessary burden for climbing - not while they were cruising over Germany!

Staff member
Mike, I can't even tell what he's trying to say there. 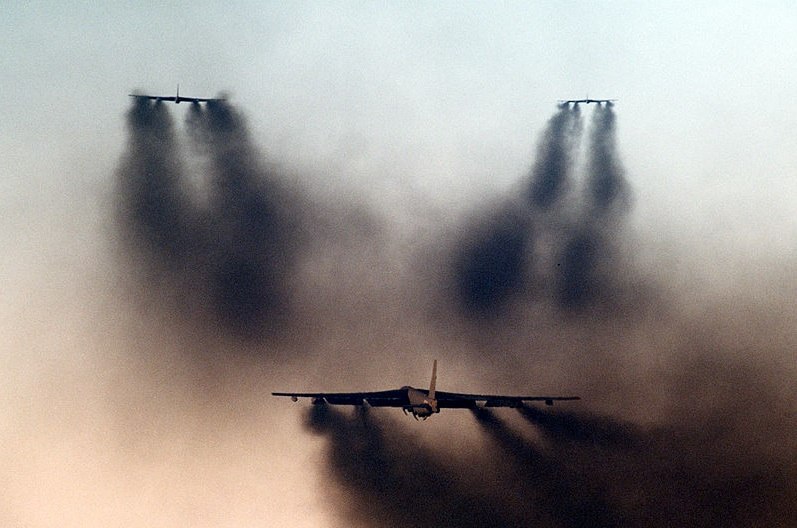 Hmm, I guess reading from his other comments, he thinks that burning kerosene only produces carbon, hence the only reason for water in the exhaust would be if it were part of a water injection system. He's got a crippled understanding of chemistry, and any effort to correct him is derided as "scientism".

I think he's trying to say that pictures of B-17's streaming contrails are actually them dumping water after takeoff, hence "out of context", or are doctored.

Not sure whether he wrote that after Tankerenemy did his "WW2 contrails are a hoax" video or not, but it certainly shows an ignorance of history & aircraft as well as chemistry & physics.
Last edited by a moderator: Nov 20, 2013

... their extremism stems not from irrationality, but from the fact that they have little (relevant) information, and their extremist views are supported by what little they know.
Click to expand...

This makes sense, but how to explain the conspiracist who is spoon fed factual information but discards it, preferring instead to hold on to their crippled knowledge?

PCWilliams said:
This makes sense, but how to explain the conspiracist who is spoon fed factual information but discards it, preferring instead to hold on to their crippled knowledge?
Click to expand...

I taught third through eighth grade, while I can introduce basic levels of math to the third graders, and algebra to the eighth graders, I couldn't come in with that algebra to the third graders, and in introducing any issue, you have to know who your audience is, you have to know the levels of the issue that they are able to comprehend and accept
Click to expand...

There's a chasm, it needs bridging. It's not easy to do when they don't realize there's a chasm. At least the schoolchildren understand that algebra is simply something that's too complicated for them right now. But the conspiracists who ignore facts think those facts are lies, or irrelevancies.

We debunkers can have gaps in our thinking too - especially if we fail to understand the thinking of those who we are debunking. Michael J. Murphy thinks we are evil people trying to subvert the truth, so anything we say is automatically tinted with suspicion. The more effort you put into trying to explain something, the more that justifies his belief that you have an ulterior motive. The more eloquently you phrase something, and the more research you do, that's just another brick in the wall.

Murphy is not stupid. He's just set in his ways, very resistent to change.

Tanner is also, in his way, not stupid. He's just REALLY set in his ways, and very strange ways they are too.

The thread on Chemtrails Kill is now up to 167 posts. Trying to get him to look at Extreme spotting photos at the moment, but he's not commenting so far.

Aircraft with those systems can not dump the water used, since it was not that much anyways. I am flying an aircraft that at one time had water injection installed, and there is no way to get rid of any remaining. It was just enough to supress detonation on max power for takeoff.

Someone will have to tell him that turboprops, ARE jet engines.

Ya I have been on that thread. The whole combustion not producing water was incredible. So millions of scientists and engineers involved in anything to do with an internal combustion or jet engine have actually been practicing scientism???? Wow!

Staff member
This "scientism" thing seems to be a bit of a trend right now. A useful way of diverting attention from the facts . "Oh, that's just 'science', you can ignore it". Rather sadly it seems to be working. It's an appeal to anti-intellectualism which always finds some support. This is taking it a bit far though.

It might be helpful to point out to such folks all the things that result from this easily dismissible science, such as telecommunications: gps, television, radio, phones, computers, plastics, synthetic fibres, manufacturing, medicine, agriculture, automobiles, aircraft, internal combustion engines, rocketry, microscopy, etc etc. Virtually every single artefact and activity they come in contact from the moment they wake up to the moment they go to bed is the result of science but many seem happy to dismiss it.
Perhaps some caves should be set aside for these folks?
You must log in or register to reply here.