After stumbling on weatherwars.info and reading some of the stuff Scott writes about, I thought it may be useful to discuss here. He has been discussed before, but on different topics. He was a TV weatherman and was fired in 2006 for speaking out about weather manipulation, and as he admits, has not had a paycheck in 10 years. Here is his headline on his website:

weatherwars.info by Scott Stevens
It is not the generation nor persistence of the trails that interests me, it is that other aircraft, some leaving trails and others not, INVESTIGATE how other previously left trails have deformed. That deformation reveals that something meteorological is occurring at that PRECISE location. This simple observable FACT, tells all that some aircraft are not up there flying cargo from point-to-point, but are doing atmospheric surveillance.

Content from external source
Then I scroll down and find this interesting explanation of what is going on in the picture, I call it "baffle them with bull$hit": 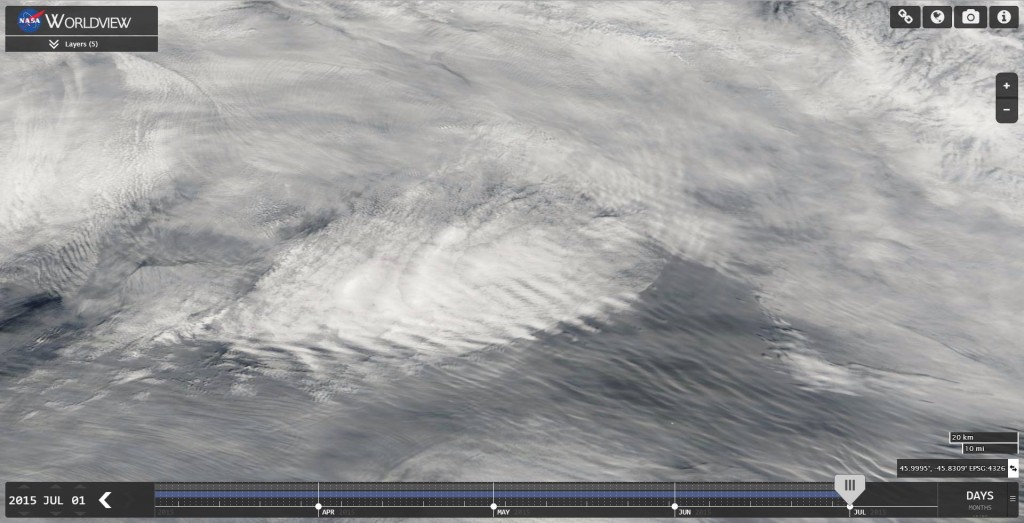 I often talk abou8to the “management of waves” in the atmosphere, these waves are, in many ways, responsible for upwards of 80% of the creation or formation of micro scale weather events… Events that matter to us on the ground. Mostly, it has to do with whether it rains or not, whether it is sunny or not, whether it is windy or not… You get the idea.
In this single image one can begin to get a grasp of the swarm of differing waveform patterns that must ALL be measured, controlled and eventually canceled out. This is why, ahead of developing storms, and underneath zones of clear skies under high pressure regions, there are so many chemtrails present. Each trail is laced with a specific chemical signature and nano-particles so that it, specifically, can be traced (for a set amount of time) as it flows through the atmosphere.
You can see the water vapor haze laced with condensation nuclei from the trails seen most clearly in the lower portion of the image … This metallic soup allows the EM technology onboard these planes the ability to pulse the atmosphere creating these waves. Much like turning on-and-off a magnet and watching the iron filings dance in response to this energy. Dope up the atmosphere with these metals, and it’ll dance/resonate/respond/undulate to your tune.
Your evening weatherman is more interested in talking to 6th graders about chasing tornadoes, flood safety and the problems caused by global warming, aka Climate Change rather than doing any kind of authentic atmospheric research. God forbid a single one of them being bold enough to step outside of the box that ensures a paycheck every other Friday and figuring this thing out for themselves.


Content from external source
Wow, metalic nano-particles being controlled by electromagnetic fields, supposedly from the military or HAARP. How much energy would it take to do this, if it were even possible? As far as I know this is complete fiction, but the chemmies gobble it up like cotton candy.

Spend an hour with Steven one on one (on the phone), for the incredibly low price of $50. And he will even take bitcoin!

Spend and hour with Scott — On the phone

During these past ten years I have been out and rather vocal about the global Geo-engineering programs. During this time I have been on many hundreds of radio shows and have been able to discus a broad array of topics. Some of these topics I am able to develop at length while others I can touch only briefly. Yet my favorite part of these shows are the questions the listeners bring to the table. These listener questions, so often, are focused on topics and points of view that I would have never considered bringing up in that moment. This is why I enjoy them so much, it is the variety they offer to the show.

The last time I was a guest on Coast to Coast AM, Sept 9th 2015, I requested that the second hour of my time be set aside for you, the dedicated and curious and seeking listener, so that you, the ones these programs affect the most, could be heard.

In an effort to open a more personal dialog with you I would like to make available an two hours a day, two blocks of time, for a personal phone call from me to you. This one-on-one dialogue will allow us cover, in-depth, any topic that you’d like to discuss without the interruptions of commercial breaks or the concern of the topic shared by you and discussed between us, is heard by the entire listening audience.

This is your opportunity for us to talk about anything you would like. You could even have a friend or spouse on the line when I call so we can expand and share the conversation.

Because of the world we find ourselves living in, nothing is for free.

So I request a donation of $50USD for the hour sent via PayPal to therealweathershow@gmail.com.. Or you can use Bitcoin. Send 0.175 Bitcoin which offers you about a 10% discount to the PayPal option (for now). I bring up the Bitcoin option as the more people become comfortable with Bitcoin usage the more insulated from the coming economic “issues” one will become.

The payment address are below. Once I see a that a transaction has been completed with your name, email address and a phone number we will set up a date and time to have our conversation.

PayPal https://www.paypal.com/webapps/mpp/send-money-online to therealweathershow@gmail.com Those that choose to donate beyond the requested $50 will move to the front of the line. Otherwise it’ll be first-come-first-served. 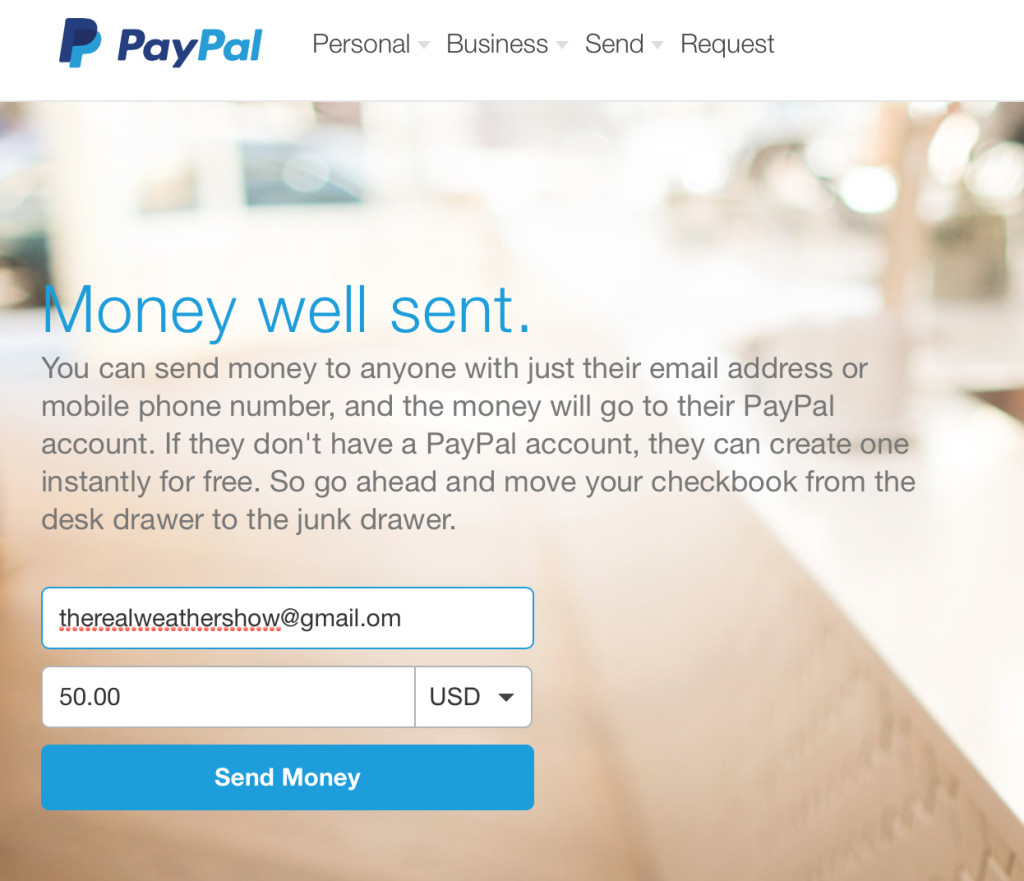 Content from external source
I wonder if he would talk to a debunker like one of us, let him know he is being recorded and then make a transcript of it. Ask him some important questions, like how does he think a chemtrail is formed and what chemicals are in them and how did they get there. Who is doing the spraying, just military, or all jets. I could come up with many more questions, but I have a feeling he would not talk to a non-believer, because then he wouldn't be controlling the narrative. One has to wonder how he gets by without an income, could there be that many people doing the one on one deal?

Staff member
I spoke with Scott at the Chemtrails Conference, he's a nice guy (at least he was at first, later he repeatedly described me as "stupid"), but he's not really open to reason. His belief seems to rest mostly on his personal interpretation of shapes and positions he sees in clouds and contrails. You would have absolutely no effect in asking him sensible questions about logistics.

Dan Page said:
I wonder if he would talk to a debunker like one of us, let him know he is being recorded and then make a transcript of it. Ask him some important questions, like how does he think a chemtrail is formed and what chemicals are in them and how did they get there. Who is doing the spraying, just military, or all jets. I could come up with many more questions, but I have a feeling he would not talk to a non-believer, because then he wouldn't be controlling the narrative. One has to wonder how he gets by without an income, could there be that many people doing the one on one deal?
Click to expand...

Why let him know he's being recorded? The CTs don't.

JRBids said:
Why let him know he's being recorded? The CTs don't.
Click to expand...

Because it's illegal in many states.

I'm definitely not condoning that...
just pointing out that 50 bucks is pretty steep for a relatively short (1 hour) hallucination.

Mick West said:
Because it's illegal in many states.
Click to expand...

But in some states only one party needs to consent to record.
Here is a summary of the laws, with relevant citations

Wasn't Stevens fired because he lied about his degree?

Mick West said:
Because it's illegal in many states.
Click to expand...

same right across Europe, or the EU as least. Even when I'm interviewing someone live on air I have to inform them, before the call is switched to the desk and broadcast, that the call is being recorded for future re-broadcast, podcasting and archiving.
You must log in or register to reply here.