for some reason (?), it seems to be in everyone's interest to keep it that way
and that's why they don't cross the border
Click to expand...

Declaring a general mobilization would mean to lose face: the master strategist admitting his perfect plan was badly botched at all levels and veering into a disaster. He's also scared of people turning against him: up to now the brunt of the conflict has been sustained by non-ethnic Russians for a reason.

And I think it's too late for a general mobilization, he should have called it months ago, then it might have worked. But at this point mobilization is pointless: it would take months for military units to be mustered and trained, provided they can train them at all because they have sent even the training battalions to the frontline. And which equipment are they going to get? Russian material losses are staggering: 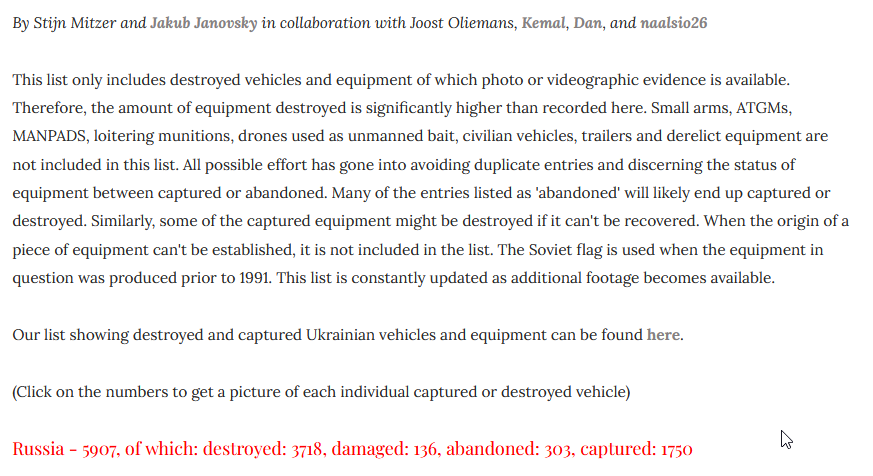 They have lost much of their 'modern' equipment and depleted their stocks of missiles and 'precision' weapons, with no results to show but an humiliating retreat. They have demonstrated an astonishing incapacity at every level of their command structure. An influx of untrained and demoralized reservists on vintage T-62 tanks is not going to help them anyway.

Mauro said:
The horrible blunder Russians made in trying to reinforce Kherson has not only doomed the troops sent there, but has also thinned Russian lines on other fronts. For some inexplicable reason they decided to leave little defences just where an Ukrainian counterattack could hurt most, in the Kupiansk direction... really astonishing.
Click to expand...

I had thought myself, the war is coming to a halt, there'll be ceasefire talks soon (though I don't suppose Zelensky would agree to one).
And in that case, it'd be important for Russia that a) Donetsk and Luhansk are protected, and b) Russia retains the "bridgehead" west of the Dnipro so they can grab Odessa when they start the war again after that.

So with these priorities assumed, it makes sense to take troops away from Kharkiv (because Kharkiv oblast is not so important, especially without Kharkiv itself) and put more troops into Kherson. If they lose Kherson anyway, the general in charge can say "but I tried everything" at his trial.

Mauro said:
And I think it's too late for a general mobilization, he should have called it months ago, then it might have worked. But at this point mobilization is pointless: it would take months for military units to be mustered and trained, provided they can train them at all because they have sent even the training battalions to the frontline. And which equipment are they going to get? Russian material losses are staggering:
Click to expand...

Russia's also done several rounds of "stealth mobilization" - pulling people from prisons, cash recruitment bonuses, college credit or forgiveness for failed classes as a recruitment incentive, calling in Chechen forces, and on and on.

All this kind of stuff diminishes what mobilization will actually do, because some of that harvest has already been reaped and squandered.

Edit: and of course the question isn't just "with what army?" But "what army with what guns?" Because there's a widely circulated video of Ukrainian soldiers finding at least 8 seemingly pristine T-80 tanks, supposedly from the 1st Guards Tank Army, and that's a story played out throughout this offensive, videos of roads with more vehicles than some nations can field just abandoned in the retreat.
Last edited: Sep 13, 2022

Hevach said:
All this kind of stuff diminishes what mobilization will actually do, because some of that harvest has already been reaped and squandered.
Click to expand...

it's hard to figure out how much of this propaganda is bunk, but after the Kiev retreat, then later after the pontoon bridge desaster and now another retreat, some of the conscripts may prefer jail to the front lines. would they be more willing to fight if Ukraine "invaded" Russia? maybe.

this is a great example of the difference in leadership and knowing your people. Putin may be at the top, but his country is not behind him in the sense that they really understand what he is doing and how much it is going to cost them. many of his soldiers claimed they didn't even know they were going to attack or why and even when they did they met resistance they didn't understand. that kind of disconnect just isn't going to work well when it comes down to choices between life and death and it isn't a big surprise to me to hear about how many abandon their posts and equipment when facing enough opposition from a determined foe (who's on their own turf and pretty much has nothing to left to lose when you've destroyed their homes, etc.).

the biggest mistakes Ukraine could make now would be to open yet another front (to the north with Bellarus) or to take their eyes off the basic goals of getting their own lands back. even shelling across the borders would be a rough choice and to me if anything had to be done it would best be done quietly and very much with precision (i.e. the opposite of what Russia has been doing).

obiwanbenobi said:
many of his soldiers claimed they didn't even know they were going to attack or why
Click to expand...

remember when Russia had these military exercises near the Ukrainian border back in February, before the invasion, when Putin still claimed there wasn't going to be one? The grunts involved in these obviously got told these were just exercises, simply to keep the intention secret. It just turned into this invasion midway through, for them, but obviously they'd know when it had started. (Getting handed live ammo is usually a clear indication.) They just hadn't known when they left home weeks before, because the grunts wouldn't be told in advance.

So the "not knowing" was mostly by necessity, in the pre-invasion phase.

of course the fighting force often doesn't know all of the reasons behind an operation, that's not just a Russian thing

PARIS, Sept 14 (Reuters) - Vladimir Putin's chief envoy on Ukraine told the Russian leader as the war began that he had struck a provisional deal with Kyiv that would satisfy Russia's demand that Ukraine stay out of NATO, but Putin rejected it and pressed ahead with his military campaign, according to three people close to the Russian leadership.

But, despite earlier backing the negotiations, Putin made it clear when presented with Kozak's deal that the concessions negotiated by his aide did not go far enough and that he had expanded his objectives to include annexing swathes of Ukrainian territory, the sources said. The upshot: the deal was dropped.

Asked about Reuters findings, Kremlin spokesman Dmitry Peskov said: "That has absolutely no relation to reality. No such thing ever happened. It is absolutely incorrect information."

Even if Putin had acquiesced to Kozak's plan, it remains uncertain if the war would have ended. Reuters was unable to verify independently that Ukrainian President Volodymyr Zelenskiy or senior officials in his government were committed to the deal.

Russian-appointed occupation officials in Luhansk, Donetsk, Kherson, and Zaporizhia oblasts announced on September 20 that they will hold a “referendum” on acceding to Russia, with a vote taking place from September 23-27.

I expect it to look a lot like the Crimea referendum after 2014, which basically the entire world rejected as illegitimate. A lot of influencing measures were alleged, but ultimately it doesn't much matter, as the vote was between restoring its own past constitution as a Russian protectorate or joining Russia directly, arguably distinction without difference and the prior status quo was never an option.

Edit: Some commenters online have said that the regions declaring for Russia officially means that the new conscripts can be sent there, as they normally can only be used inside of Russia's borders. That may be the case, but it's not like Russia's let its own rules get in the way so far, right?
Last edited: Thursday at 2:13 PM
You must log in or register to reply here.
Share:
Facebook Twitter Reddit Pinterest Tumblr WhatsApp Email Share Link