In the spirit of pre-bunking, because Romania is a NATO member:

The fighter from the 86th Air Base in Borcea, Călărași County, was on a regular patrol mission in the Constanta county in the country’s east when it encountered adverse weather conditions and disappeared from radar at 20:03, local time.

A Romanian Air Force IAR 330 Puma was immediately deployed for a search and rescue mission with five crew on board. The helicopter took off at around 20:21 before it too disappeared from radar some 23 minutes later and about 11 kilometers from the airfield.

The country’s air force said the helicopter was believed to have crashed in the area of Gura Dobrogei, north of the port city of Constanta.

A search and rescue operation for the helicopter and its crew has also been launched.

In an update on the two crashes, the Romanian defense ministry said both the pilot of the MiG-21 and the crew of the Puma helicopter had been found dead. While it initially said that five crew were on board the helicopter, there were actually seven, including two Romanian Navy personnel.

“It is premature to discuss possible causes. Certainly, there were unfavourable weather conditions, but we can’t comment now,” spokesman General Constantin Spanu said on local television on Wednesday.

The helicopter pilot had reported adverse weather conditions and had been ordered to return to base, according to the ministry.

The original press releases from the Romanian Ministry of National Defense are available via https://www.mapn.ro/cpresa/index.php . Excerpts, translated via Google:

On Wednesday, March 2, at 8:00 pm, a MiG 21 LanceR aircraft from the 86th Air Base, carrying out an air patrol mission over Dobrogea, lost its radio connection with the control tower, and at 8:03 pm it disappeared from the radar. an area between Cogealac and Gura Dobrogei.

The IAR 330-Puma helicopter, which took off on Wednesday, March 2, around 8:21 p.m., in a search-and-rescue mission of the Mig 21 LanceR aircraft, lost its radio connection with the control tower and disappeared from the radar around 8:44 p.m.

So far, there is no public mention of evidence that points to enemy action.

The conclusion of the preliminary investigation confirms that the crash was an accident, not the result of enemy action.

From the Romanian Ministry of Defense, via Google translate:

The technical investigation commissions formulated preliminary conclusions regarding the probable causes that led to the crash of a MiG-21 LanceR plane and an IAR-330 helicopter, on March 2, in Constanţa County, events that caused the death of eight soldiers .

From the information obtained from the measurements and evaluations carried out, the analysis of the data extracted from the system for recording flight and operating parameters on board aircraft, listening to radio calls, examining the condition of aircraft wrecks, studying synoptic maps and existing weather conditions in areas impact at the time of the two air disasters, the commissions concluded that both events were most likely due to a combination of human and environmental factors, the share of which is to be determined at the end of the investigation procedures.

From the Romanian Ministry of Defense, via Google translate:

By order of the Chief of the Defense Staff, General Daniel Petrescu, the flight activities with the MiG-21 LanceR aircraft from the Romanian Air Force were suspended, starting with Friday, April 15.

Would anyone dare to bet whether these MiG-21 that Romania is no longer using are going to find their way to Ukraine?

Mendel said:
Would anyone dare to bet whether these MiG-21 that Romania is no longer using are going to find their way to Ukraine?
Click to expand... 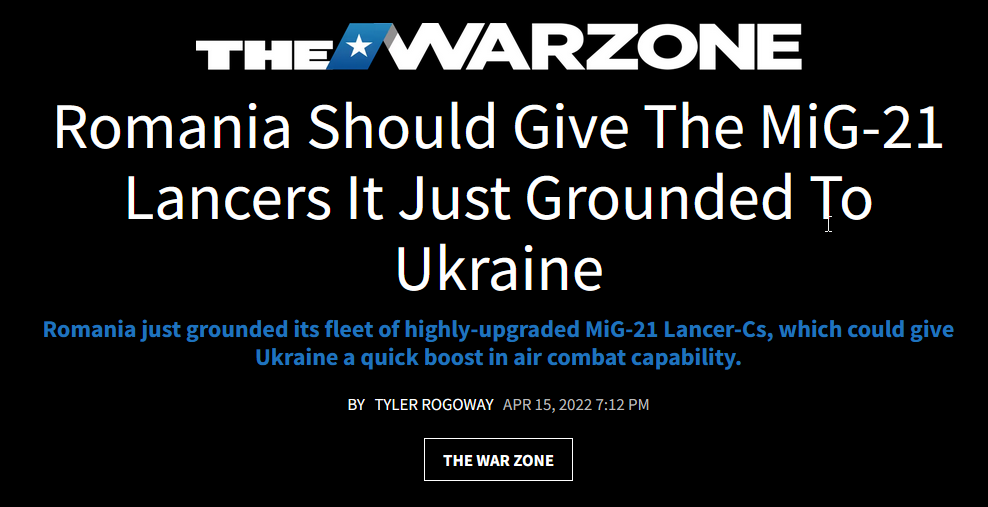 https://www.thedrive.com/the-war-zo...he-mig-21-lancers-it-just-grounded-to-ukraine
You must log in or register to reply here.