A few days ago, the term “resilient cities” popped up in a Washington Post story about yet another government official going public with his conspiracy beliefs. A little research into the term reveals a 2013 initiative that doesn’t have even a passing resemblance to a conspiracy. 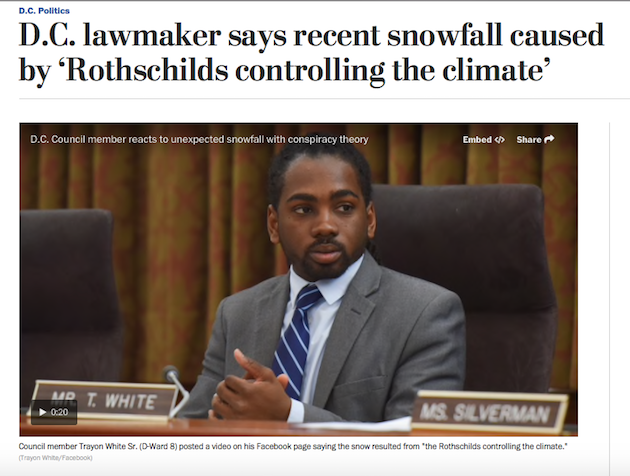 
A D.C. lawmaker responded to a brief snowfall Friday by publishing a video in which he espoused a conspiracy theory that Jewish financiers control the weather.

D.C. Council member Trayon White Sr. (D-Ward 8) posted the video to his official Facebook page at 7:21 a.m. as snow flurries were hitting the nation’s capital. The video, shot through the windshield of a car driving west on Interstate 695 through downtown Washington, shows snowy skies while White narrates.

“Man, it just started snowing out of nowhere this morning, man. Y’all better pay attention to this climate control, man, this climate manipulation,” he says. “And D.C. keep talking about, ‘We a resilient city.’ And that’s a model based off the Rothschilds controlling the climate to create natural disasters they can pay for to own the cities, man. Be careful.”


I have never heard the term “resilient cities” before. The Post article traced it to Deborah Tavares, who also uses the term “kill cities” and claims that a Jewish-backed conspiracy is dedicated to depopulating urban centers through weather control, with the end goal being: “The restructuring of North America.”
https://www.aircrap.org/2018/02/10/kill-cities-deborah-tavares-rothschilds-plans-america/


Tavares is taking the program 100 Resilient Cities and twisting it into a pretzel.

The actual 100 Resilient Cities website elaborates on the purpose of the program:


100 Resilient Cities was created by the Rockefeller Foundation on the foundation’s Centennial in 2013. We began working with our first group of 32 cities in December of 2013. In 2014, we received 330 applications from 94 countries for our second cohort, and we announced the 35 cities of round 2 in December. The third 100 Resilient Cities Challenge closed in November of 2015 and we announced our final group of cities in May 2016.

It goes on further to explain:

Building urban resilience requires looking at a city holistically: understanding the systems that make up the city and the interdependencies and risks they may face. By strengthening the underlying fabric of a city and better understanding the potential shocks and stresses it may face, a city can improve its development trajectory and the well-being of its citizens.

Chronic stresses are slow moving disasters that weaken the fabric of a city. They include:

On the other hand, acute shocks are sudden, sharp events that threaten a city, including:


To accomplish all this, the program asks city governments to pledge 10% of the budgets to projects like: “deep energy retrofits,” “participatory budgeting,” and “neighborhood revitalization.” The Rockefeller Foundation is matching this funding with a total of $164 million in grants.
http://www.100resilientcities.org/10percent-resilience-pledge
http://www.100resilientcities.org/100RC-FAQ/#/-_/


Somehow, in Tavares’ mind, the pledge became analogous to the old trope about Agenda 21 and world domination with a dash of the Protocols of the Elders of Zion and geoengineering.

Just nonsense.
You must log in or register to reply here.

T
Claim: Bushfires have not been affected by climate change, and are affected by impeded hazard reduction
2