I've been talking to a flat earther who considers sun glitter to be solid evidence for a flat earth. 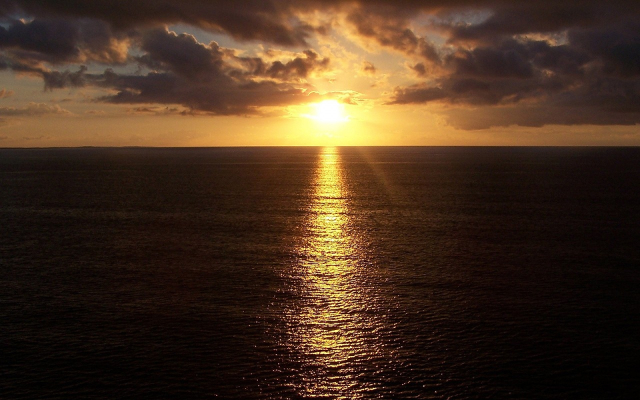 I've walked him through the explanation: the earth is not curved enough to produce a curved appearance; waves are reflecting the sun toward the viewer, and the angles of the wave normals more than compensate for the angles of the earth normals which point away from the viewer (the earth normal at the horizon is pointed away the most). I've even shown a geometric proof of this.

But as is common in flat eartherism, there is a suspicion of mathematics. He wants to see a demonstration. And I have to admit, I'd like to see one too. Specifically, with a physical model we would like to see a spot of specular reflection like this 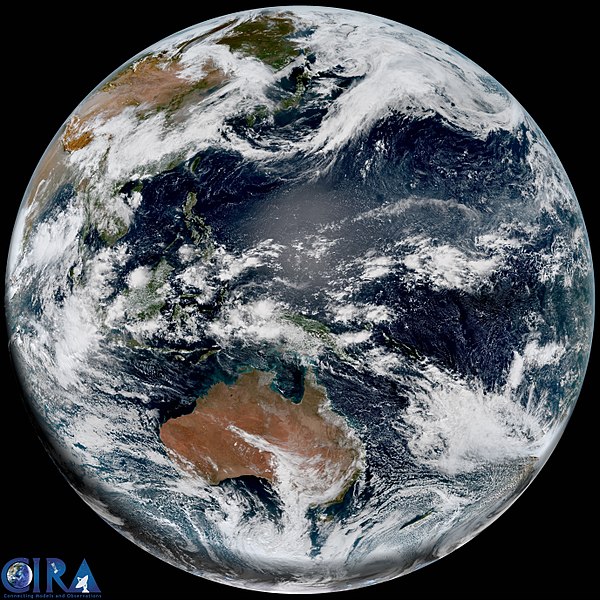 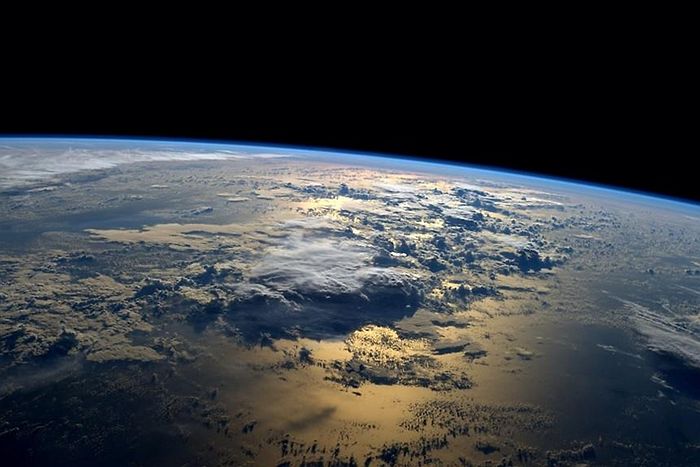 With a little zoom, it might be possible to get the line of sight very close to the surface in order to see something similar to sun glitter.

Does anyone have, or know the location of, a large convex surface covered with tiny bumps? 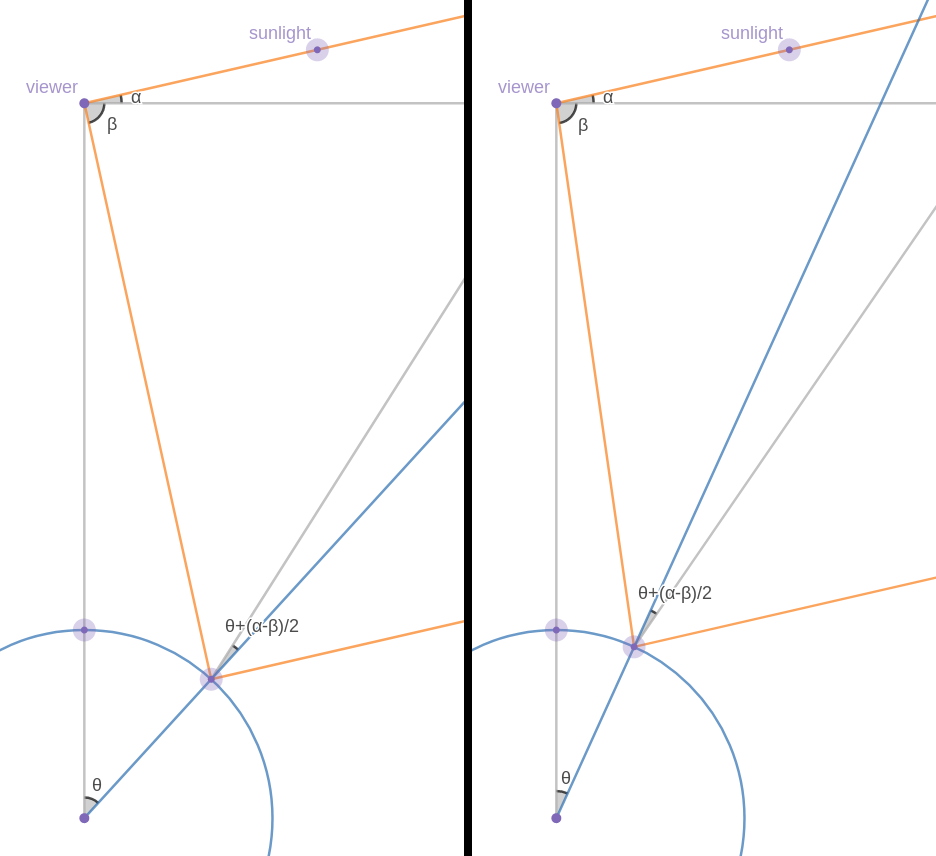 The specular reflection is between those two points. (The derivation θ + (α - β)/2, the angle of the wave normal, is shown later.)

A trail-shaped specular reflection extending to the horizon is like this: 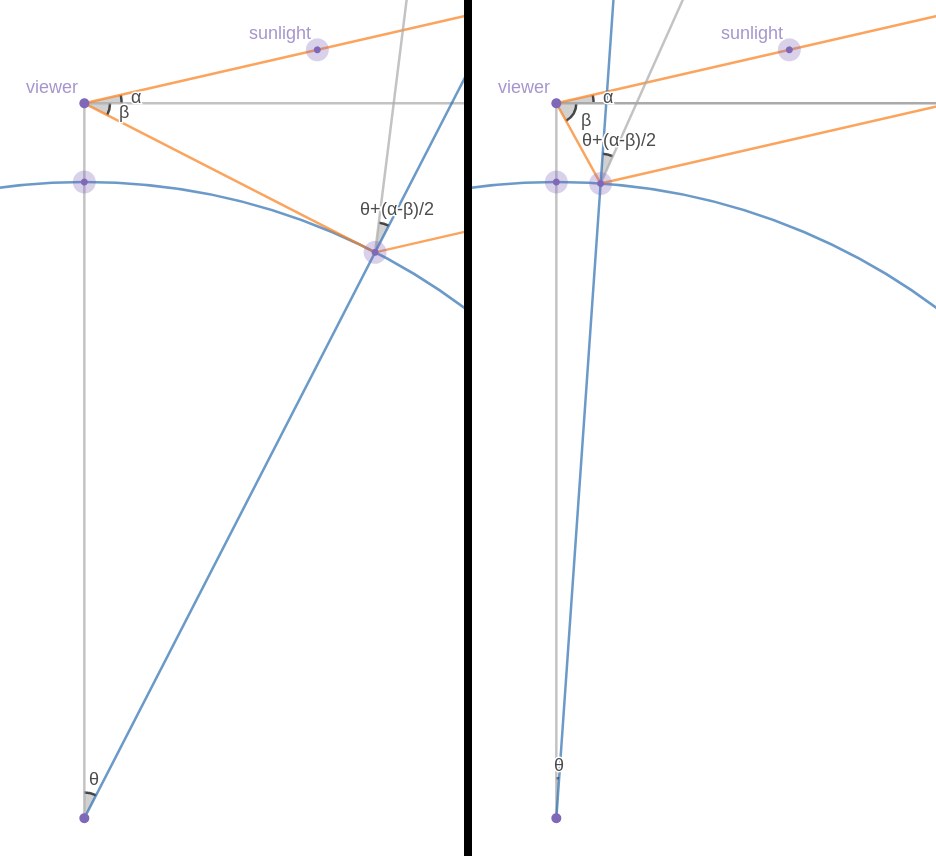 Again, specular reflections are seen everywhere between those two points, hence the trail of sun glitter.

You can move around the purple-haloed points in the live diagram.

The ideal photo of sun glitter would allow us to estimate the camera height, the angle of the sun, and the distance to the nearest endpoint of the glitter trail. This is good enough: 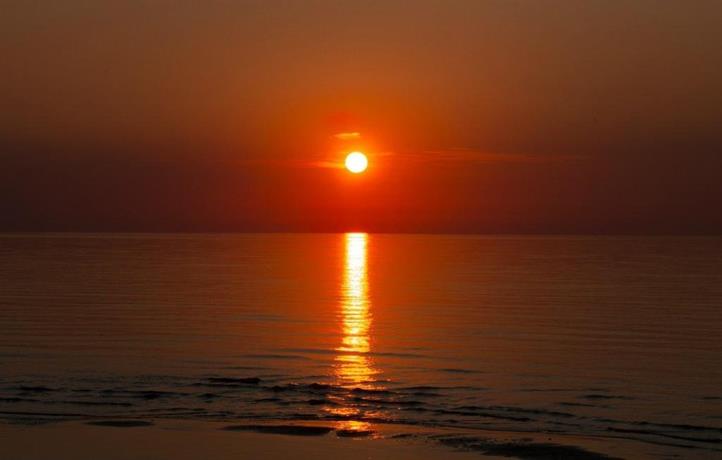 Since the angular diameter of the sun is about 0.5°, the inclination angle (α) to the top of the sun is roughly 3° (while it is a low flare image of the sun, there is still some flare to ignore).

The farther it is to the start of the glitter trail, the harder it is to prove the glitter extends to the horizon. So let's generously say 50 feet to the glitter. With a viewer height of 6 feet and ignoring the curvature of the earth along 50 feet, β ≈ 6.8° (calculation).

If a wave normal can point 1.9° away from us, then it can certainly point 1.52° toward us. Therefore if the earth is a globe as claimed, then we will see glitter at the horizon.

The last thing to prove is that glitter appears everywhere in between the start of the trail and the horizon. Consider the last diagram again: as we march from the horizon toward the viewer, θ is strictly decreasing and β is strictly increasing. Therefore the angle of the wave normal θ + (α - β)/2 is strictly decreasing, and thus takes on every value in between 1.52° and -1.9°. So at every point along the glitter trail, a wave is able to reflect light to the viewer. 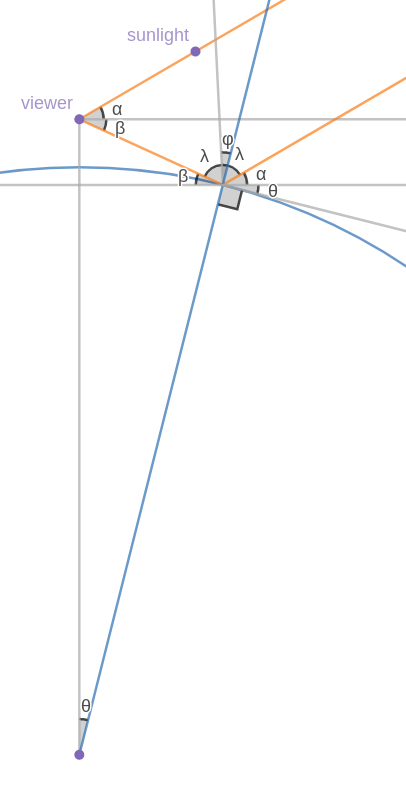 Addendum: There is a previous thread on sun glitter, however that concerns the question of why different viewers see their own personal version of sun glitter. That is a different topic, or at least seems sufficiently different from the issue addressed here.
Last edited: Oct 11, 2019

Antithesis said:
I've been talking to a flat earther who considers sun glitter to be solid evidence for a flat earth.

I've seen similar arguments from the FE community before, but I have yet to see anyone articulate exactly how the specular reflection of the Sun over the ocean should be different on a globe versus a sphere. Does the flat earther that you're engaging with offer anything more than "it looks wrong?" They need to clearly state what it is about the reflection that they think isn't possible on a globe in order for someone to show where they're mistaken.

I think that observing the Sun's reflection over water is actually a pretty bad way to try and discern the shape of the Earth, because the appearance of the reflection is primarily dependent on a difficult to measure quantity: the distribution of wave heights on the surface of the ocean. That will affect the reflection much more dramatically than the very slight curvature of the Earth experienced by an observer on the beach. In fact I don't see how one would make a measurement of the Sun's reflection that will tell you definitively whether the Earth is flat or spherical.

One simple thought experiment you might suggest is to imagine how the Sun's reflection would appear if the ocean were mirror smooth. Your flat earther should grasp that it would look like a circle, and from there perhaps make the leap that the waves are mainly responsible for smearing the reflection along a line to the horizon. Or better yet, just ask where they think is happening to the Sun a few minutes later (assuming sunset) when it dips below the horizon

In retrospect, the main point of my post is that it can be rigorously shown that the trail of sun glitter is what we would expect to see on a globe earth. It comes down to the angle of the wave normal that reflects sunlight toward the viewer, θ + (α - β)/2. If I could redo the post, I would focus on that.

When I explained how the slight curvature of the earth doesn't matter with respect to sun glitter, I was told this was "not a calculation, it's your opinion". So I did the calculation, as I didn't find it online.


chrisl said:
Does the flat earther that you're engaging with offer anything more than "it looks wrong?"
Click to expand...

His point is that there isn't a physical demonstration of a specular spot transforming into a specular trail, and therefore in the absence of such evidence, one shouldn't believe that it can happen. Despite being shown geometrically that a specular spot and a specular trail are the same phenomenon of specular reflection at different angles (the two pairs of diagrams above), he doesn't believe mathematics can prove anything about the real world.
Last edited: Oct 15, 2019

Antithesis said:
But as is common in flat eartherism, there is a suspicion of mathematics. He wants to see a demonstration. And I have to admit, I'd like to see one too.
Click to expand...

Perhaps you could just have two people film the same sunset over the sea from different altitudes. You'd need a position where you could see south and west to get the sun high over the sea and then low. Or maybe only one is needed. Here's a compilation.


At 8:06 you see the reflection narrowing as the angle decreases. 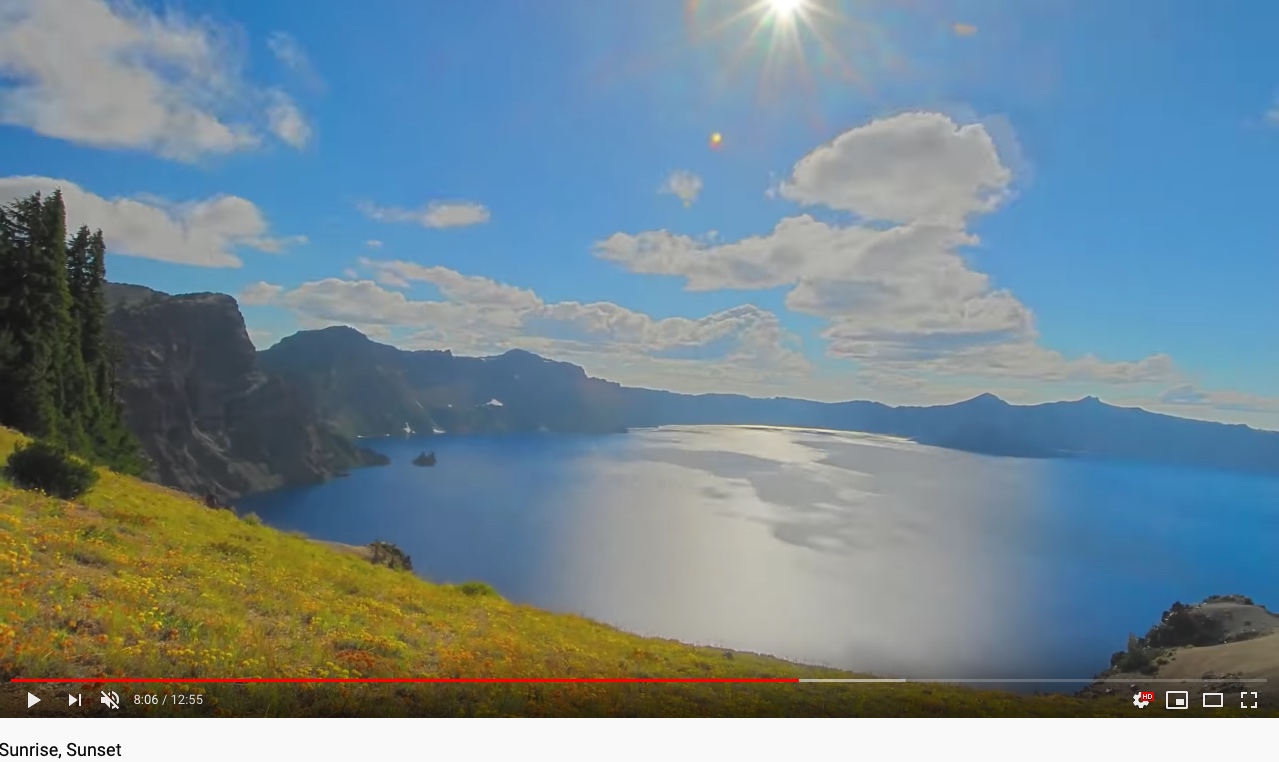 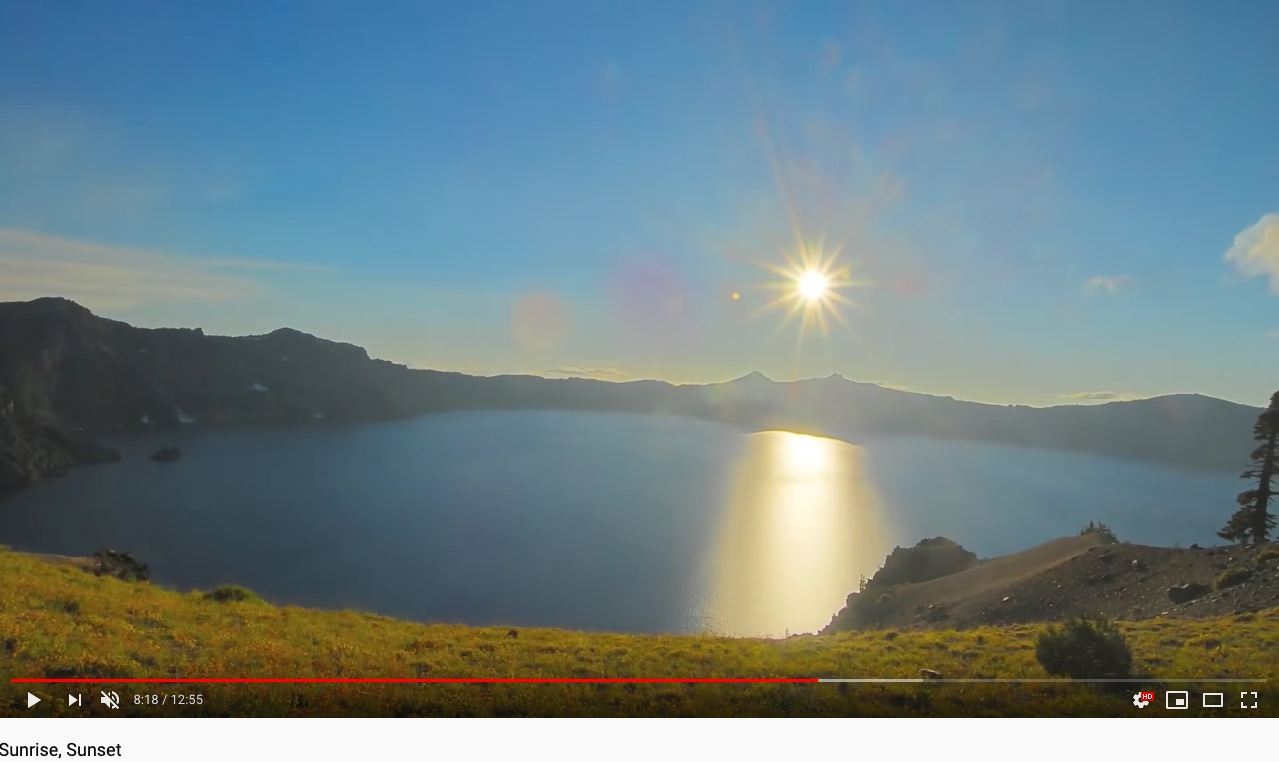 The fundamental problem here is that what is actually going on, while relatively simple, is beyond the frame of reference for most flat earth folk. If they understood this, then they would understand how sunsets could not work on a flat earth, and so they would not be asking the question.

For a physical demonstration, try some aluminum foil, crinkled and then roughly flattened onto the slightly curved top of a car.
A

The sequence starting at 7:18 is particularly useful: due to the height of the camera, the intense part of the specular trail actually ends. One can easily imagine seeing the entire trail end if the camera were higher up. This transformation from elongated spot to trail is close to what the flat earther is looking for. 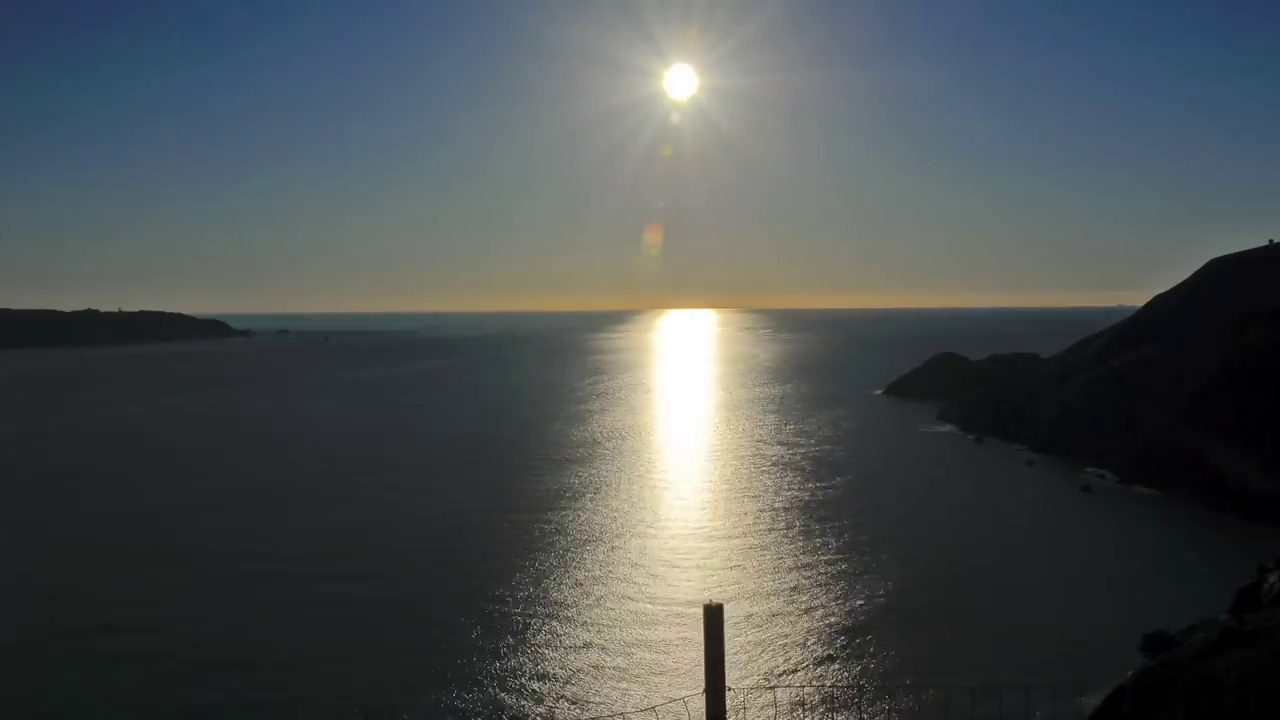 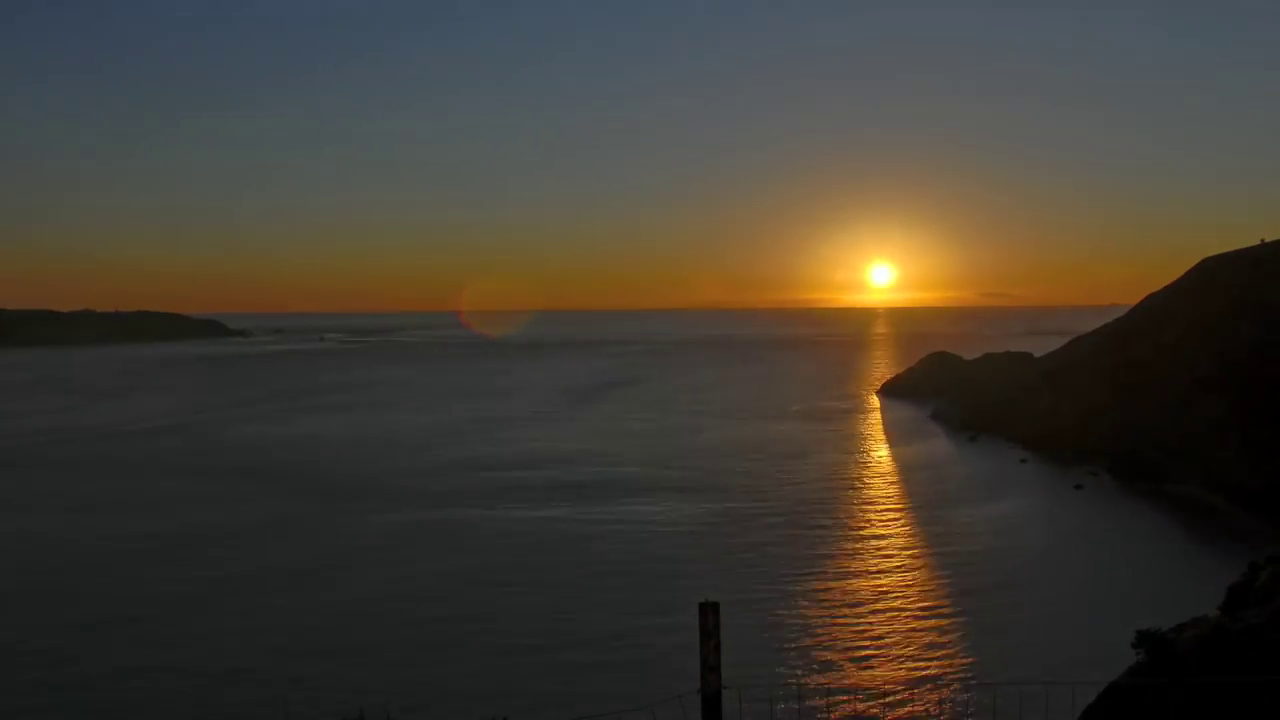 These two diagrams represent depth-squashed versions of the above pictures, with the sun ray coming toward the camera as it bounces off the wave and reaches the camera. 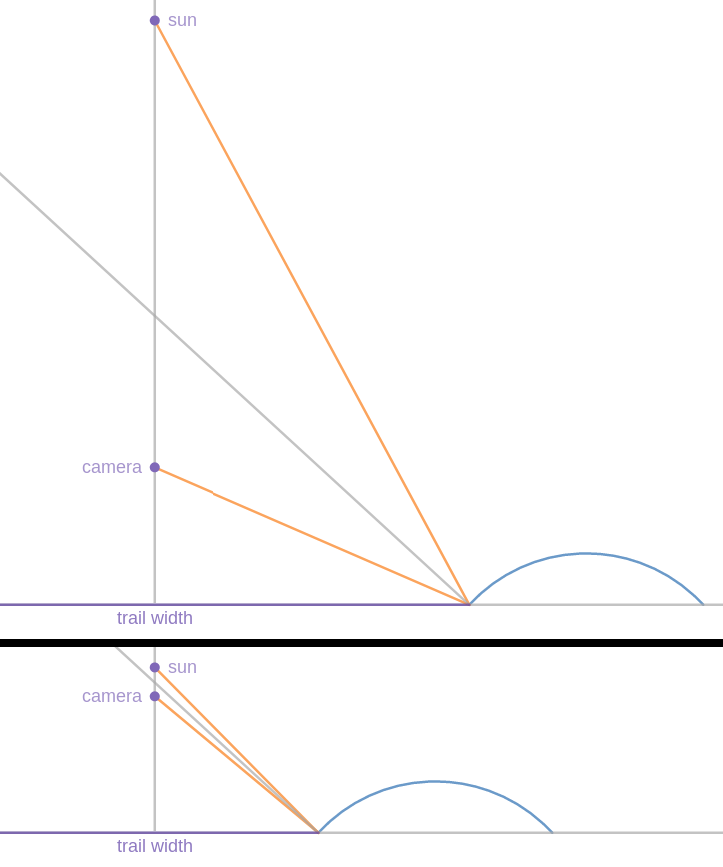