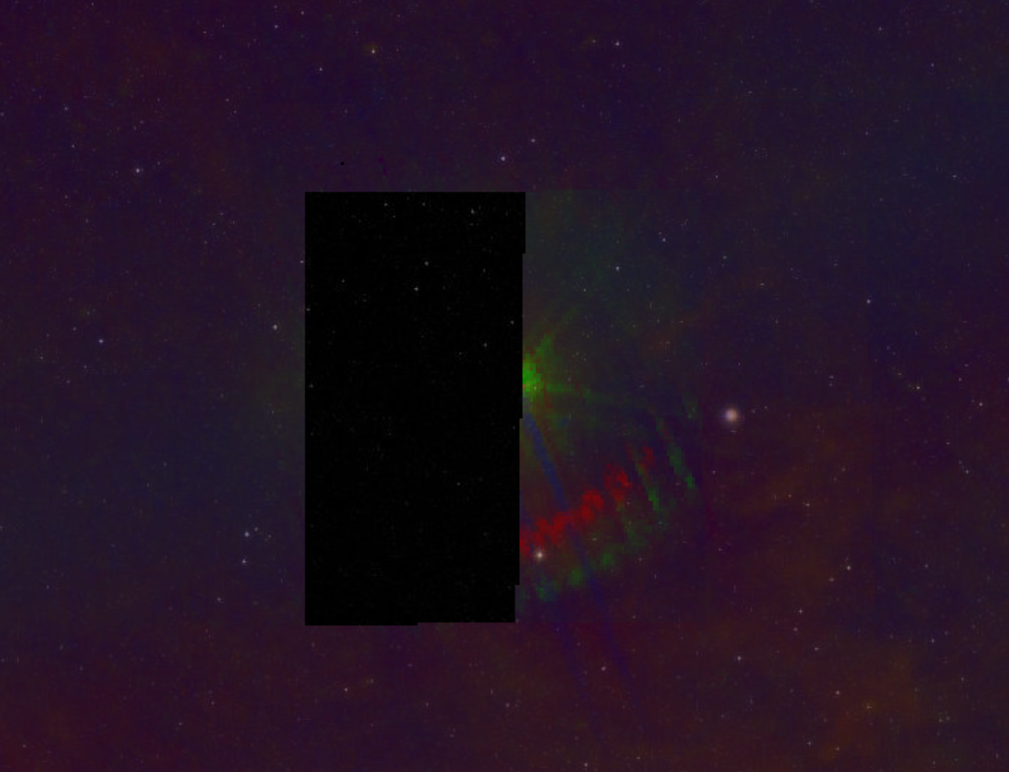 I've been seeing this picture come up quite a bit the past year in multiple "weird" online worlds from Kek/Trump conspiracies to, now, Nibiru proof. Couldn't find in existing threads. If there, please stop here and just reply with a link to the existing post.

They take this picture from google sky, which is from Cassini (zoom out for context): 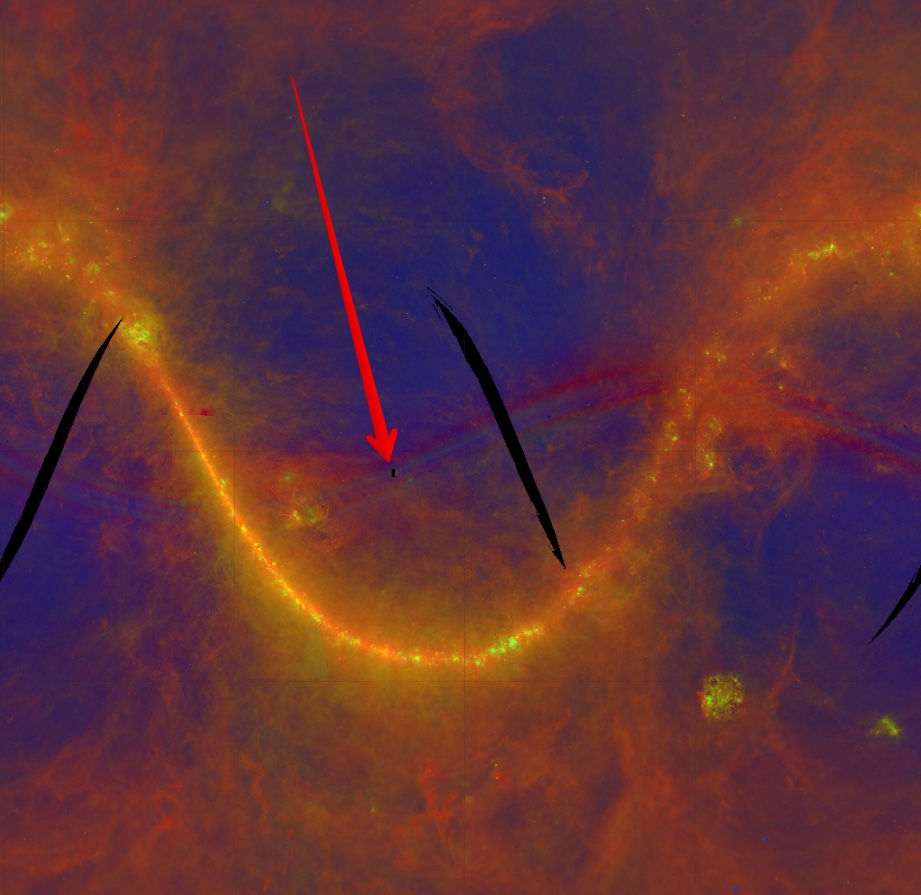 Claim the blacked out portion is censored and that there's actually a "red dragon" looking thing there that's being hidden and that it's Nibibiru or, at the very least, is the Red Dragon of the apocalypse.

I honestly regret clicking links in this world so just google "red dragon google sky" and you'll see the multiple "uncensored versions" of the image come up. It looks like a creepy smiling face in any instance.

If we go back to the original googly sky link, though, you can see other blacked out portions for apparently technical reasons. I'm thinking there's a far less conspiratorial explanation for the black space there but I don't know enough about orbital telescopes to figure it out.

Also, I'm not astronomically adept enough to know what's actually there causing the green lights that are blacked out.

Thanks to anyone who knows anything about this!
Last edited by a moderator: Sep 12, 2017

Staff member
A kind of lense flare/interference pattern (for the shape), and an untransmitted block (a glitch) for the black square. Zoom in on this one:
https://www.google.com/sky/#latitud...00&WMAP=0.00&Cassini=0.00&slide=1&mI=-1&oI=-1 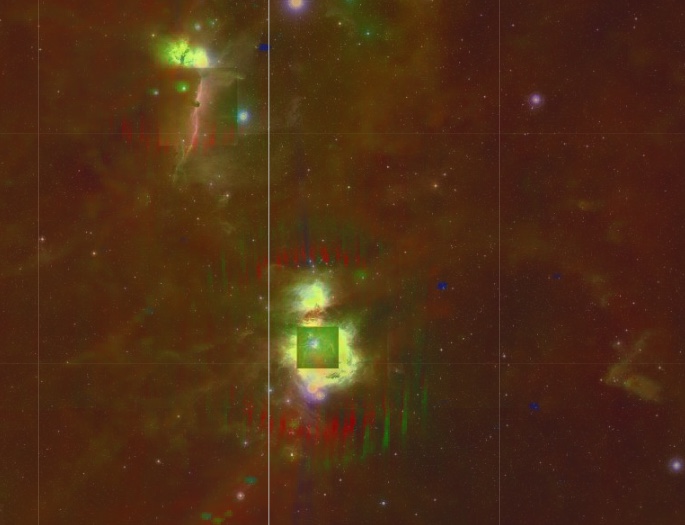 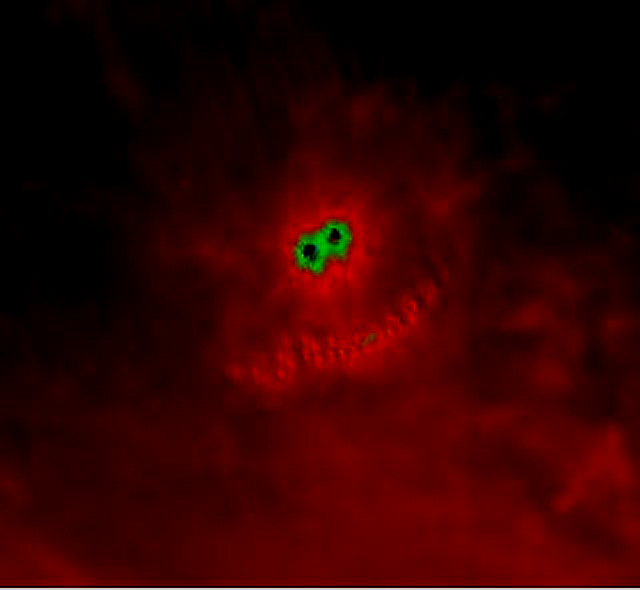 that was quick. thanks!

The lense flare makes total sense and the glitch does too (for the black box).

If the black box is is a glitch, how likely is it that the glitch would repeat across multiple orbits like that?

When I zoom in on similarly green colored spaces in the link (even the other lense flair ones), I see nebulae and sometimes stars. When I zoom in on the spot in question, I just see a starry sky. Why would that be?

ManFrito said:
If the black box is is a glitch, how likely is it that the glitch would repeat across multiple orbits like that?
Click to expand...

Those are not multiple orbits. It's the same image tiled horizontally

Like when you zoom out on some map apps: 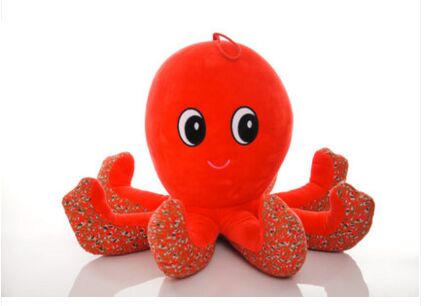 The mission's official logo was a monstrous octopus with its massive arms wrapped around the world, accompanied by the motto "Nothing Is Beyond Our Reach" 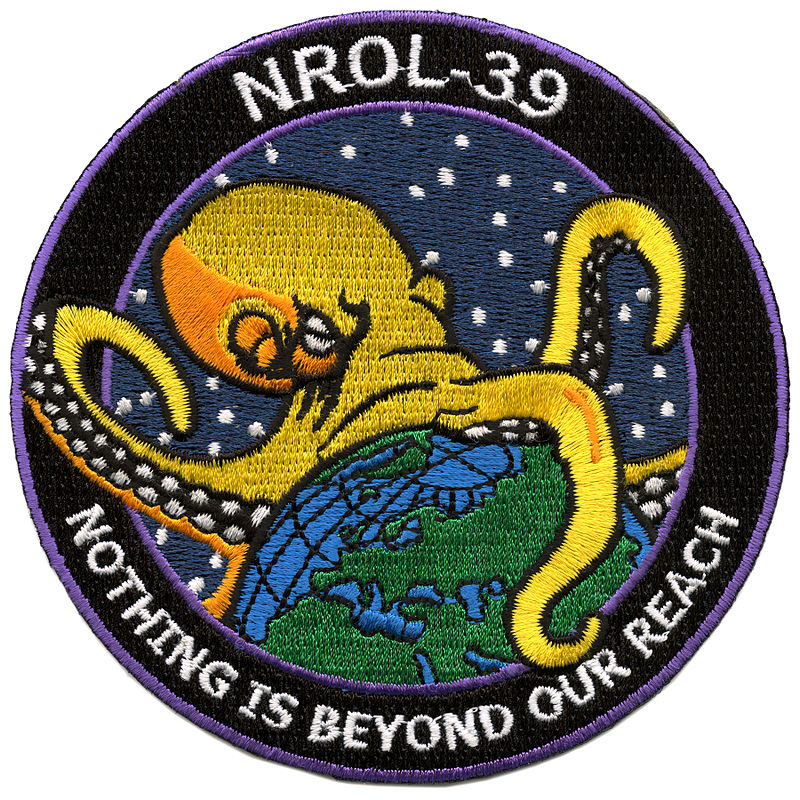 So that is a double image of Saturn recorded by IRAS in 1983. There are multiple versions of the IRAS data, google sky uses the "Improved Reprocessing of the IRAS Survey" also known as IRIS. The IRIS version has been recalibrated and that particular section was removed since the major planets are not supposed to be part of all-sky surveys. IRAS had to complete its scan of the entire (or almost the entire) sky in about a year of time before its coolant ran out. Once the cryogenic coolant was exhausted the telescope's own internal heat washed out the long wavelength far infrared part of the spectrum it was surveying. Thus there was no time to wait for Saturn to "move out of the way" for the survey to go back and scan that part of the sky without Saturn in it. In fact IRAS was designed to scan the sky line by line with a single column of pixels, and as a result of the way it scanned the sky, Saturn was captured twice at two different time points resulting in a "double image" of the planet.
https://skyview.gsfc.nasa.gov/blog/index.php/2016/05/11/757/

The above link is a temporary directory created when I called up the tables that correspond to those coordinates, but it will be automatically removed after a certain period of time, so I downloaded a couple of the scan tables and uploaded them here for future reference, they are the .tbl files:
http://dropcanvas.com/8up0p

Here are the resulting charts, the cyan crosshairs show where those coordinates match up with the IRAS data:
July 14 1983 coordinates: 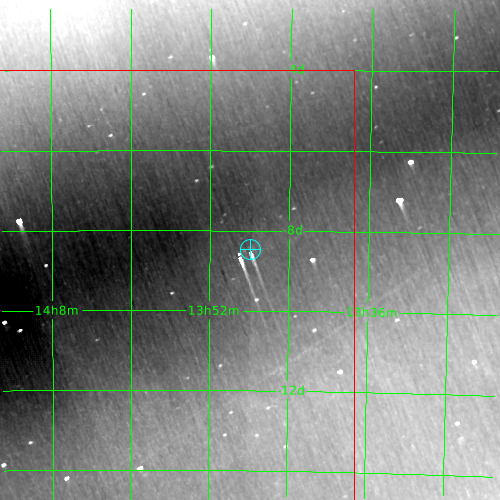 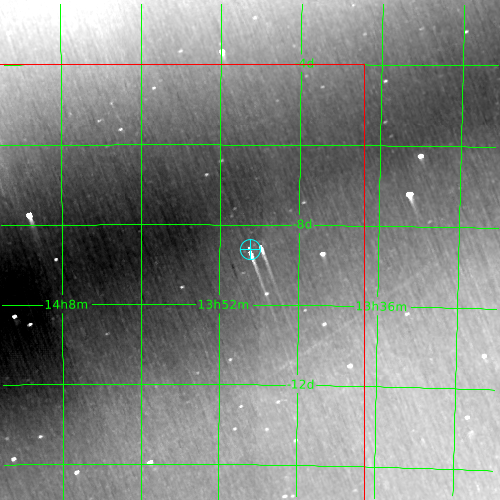 A perfect match in both cases. These grayscale images are from the 12 micron band. You can take those coordinates into SkyView Virtual Observatory (https://skyview.gsfc.nasa.gov/current/cgi/query.pl ) and generate color versions if you like. The 100 micron band with the "Prism" color table selected appears to be what was featured above: 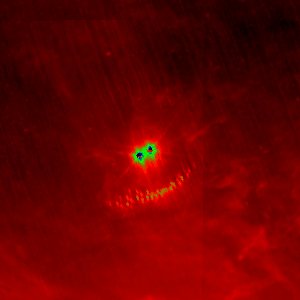 You'll note the black box is there again in the IRIS data, but not in the original IRAS data which is also available from SkyView.

The WISE telescope is the modern successor to IRAS, and like IRAS it had a limited supply of cryogenic coolant which meant they had about a year to survey the entire sky at far infrared wavelengths in 2010. Similar issues can be seen in the original WISE survey data, and in fact Jupiter in the WISE data has been claimed by at least one "Nibiru researcher" as being "Nibiru." Here's a video I did about that:
Source: https://www.youtube.com/watch?v=Uq_ArwlzG-4
Last edited: Sep 13, 2017

Astro said:
since the major planets are not supposed to be part of all-sky surveys.
Click to expand...

The purpose of an all-sky survey is to provide a reference for known point sources and faint sources such as stars and galaxies. Moving objects within our solar system such as planets are "artifacts" for the purposes of the survey. The paper describing the creation of the IRIS version of the IRAS dataset describes this and specifically mentions Saturn on page 304 (3rd page of the PDF):


"Before co-adding the individual HCONs, the IRAS team inspected them visually to identify artifacts like moving objects (e.g., asteroids) or residual glitches. To allow for further validity checks of point sources seen (or not) in the co-added maps, the IRAS team decided to provide the individual HCONs that include those artifacts."
...
"We also dealt manually with Saturn because of its large extension in the affected HCONs."

As the paper above describes, the main purpose of eliminating Saturn and processing the IRAS data the way that they did was to provide a reference dataset for future missions (particularly in infrared, sub-millimeter and millimeter wavelengths) to use for analyzing the interstellar medium in order to improve the interpretation of their own datasets. In this sense, anything within our solar system, including zodiacal light, asteroids, and major planets become a distraction from the desired data. This is also true of visible light all-sky surveys; I use the Palomar sky surveys all the time to examine the proper motion of stars across decades of time. Major planets on the plates would be a distraction from what I'm seeking to find and would wash out faint stars nearby.

Thanks everyone for chipping so quickly and, especially in the case of Astro, succinctly. That post answered everything.

I appreciate your time and expertise, as well as patience. I mostly just lurk here but hadn't seen a post covering this one so decided it would be my first one. I'll be sure to post more red arrow pics if I need some help again (that's to Mick who was kind enough to add those for me).

Cookie Elmo!
You must log in or register to reply here.
Related Articles
Does this video footage show a dragon (sea serpent) attacking a manatee? [No]
Strange lights on picture of the moon during "Blood Moon" [Stuck Pixels]
How did Tim Peake get full Earth in his helmet picture? [convex mirror illusion]
Explanation needed for the decrease in size of USA in NASA's picture from space taken in 2012-13
Faked moonlanding picture or is there an explanation?
Clinton rally numbers manipulation of photograph, I'm seeking the source
Photo Anomaly - Missing my face.
Can you help with a picture? [Ballast Barrels]
Debunked: Airplane passenger 'takes picture of UFO that was giving off bright lights and orbs'
[NeedInfo]Persistent Contrails Picture Show
This picture is not a Fukushima related fish die off
Claim: Picture shows rock formation under WTC caused by nuclear device
Debunked (sort of): Picture of LEO spraying a child with Mace
Photo shop. How to check if a picture has been Photoshopped
Debunked: Shade, The Motion Picture - Chemtrails and Geoengineering
Please Debunk WeatherWar101s "Weather War Big Picture" Video
Share:
Facebook Twitter Reddit Pinterest Tumblr WhatsApp Email Share Link