In another thread - as well as here - we've been talking again about recreating the Bedford Levels Experiment. A lot of new and useful information has come out: both about the previous experiments, and where they took place, as well as with regard to carrying out a definitive version.

This is my attempt to pull all that together and (hopefully) actually do it, in the summer of 2018 (date to be confirmed).

Note: I went a bit overboard with it, and it got very long. So here's the TL;DR:
Or, in an even smaller nutshell, this is what flat earth theory predicts: 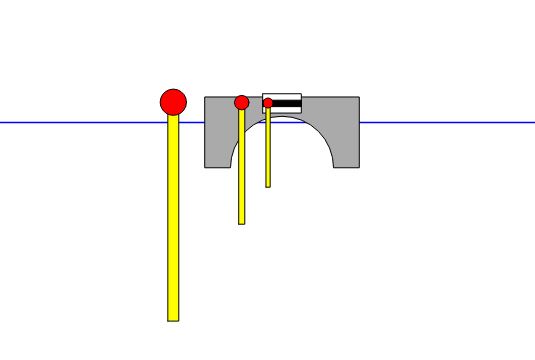 And this is what round earth theory predicts: 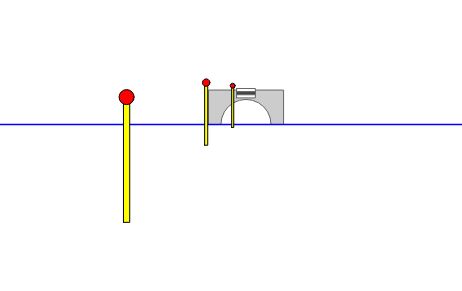 And never the twain shall meet.

The Old Bedford River in Cambridgeshire, England has a special place in Flat Earth folklore: it was here, in 1838, that Samuel Rowbotham - the father of modern flat earthism - carried out a series of experiments that he believed proved the earth was flat.

Unfortunately, most of his experiments have been invalidated due to the proximity of his telescope to the surface of the river, where the effects of refraction are strongest.

He did devise one experiment, however, which appears sound in its methodology: 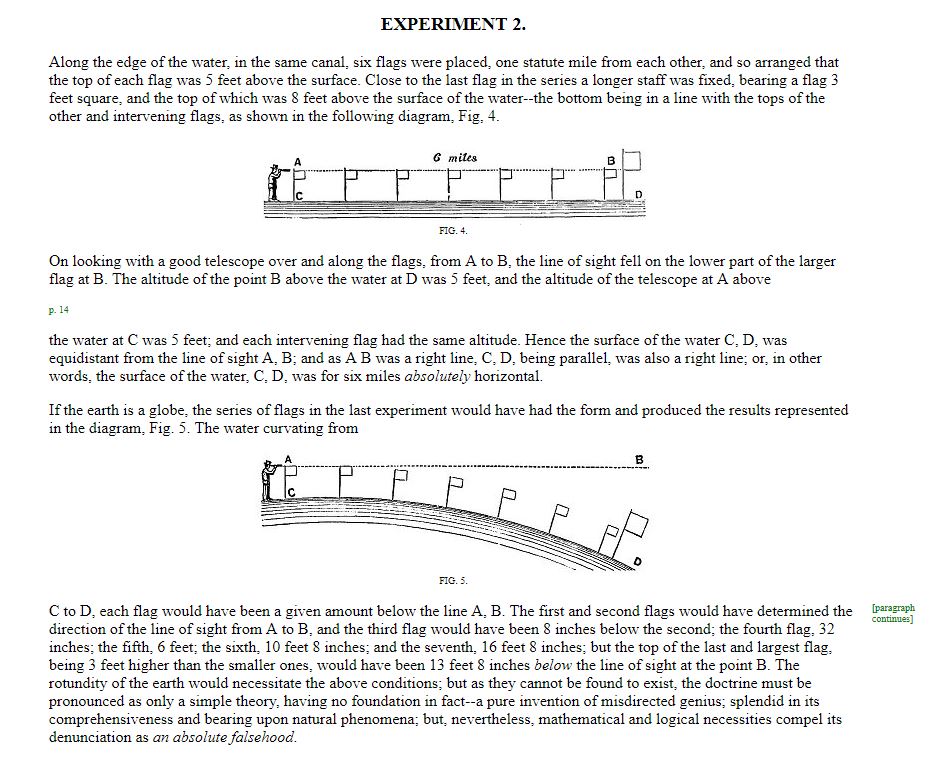 This experiment is basically the same as that carried out by Alfred Russel Wallace in 1870 - equally famous in folklore - although Wallace's experiment used only two markers: a target placed three miles along the river, and a sheet on a bridge, six miles distant, with both those targets and the observer - on another bridge - situated about 14 feet above the water:

The view obtained through his telescope appeared to show that the middle target was indeed raised on an apparent "hump of water": 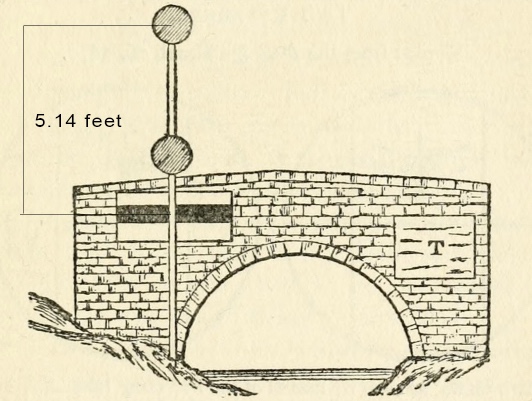 Unsurprisingly, both men felt that the results of their experiments supported their own model, while there were problems with both the other man's model and his conclusion.

Notes on these experiments:
Other experiments on the Old Bedford were carried out in later years, most notably by Henry Yule Oldham (1901) and (on behalf of) Elizabeth Blount (1904) - again, with both sides finding evidence to support their own chosen model. The problem with Blount's experiment appears, once more, to have been one of refraction; while Oldham's only issue for the present day researcher, having used more targets than Wallace, is merely one of not being recorded by either photograph or video.

In more recent days, a group of modern flat earthers attempted to recreate Rowbotham's original experiment, but failed to show anything of note.

(This is a brief and extremely simplified history: here and here would be good places to start, for more details.)


2. Why the Old Bedford River?

As well as its fame in flat earth circles, the stretch of the Old Bedford River around Welney is probably the longest straight section of uninterrupted inert/near inert water in the UK: a distance of 5.85 miles from the road bridge at Salters Lode (52.5876, 0.3389) to the sluice at Welney (52.521, 0.2527).

Also, it is easily accessible, and the shallow depth of the water, as well as the ability for interested parties to examine the equipment and make their own measurements, makes it a good spot for interactive experimentation.

Note: the section southwest of Welney, towards Welches Dam, which Rowbotham used for several experiments, is also around 6 miles long, but isn't quite as straight; has more trees growing over it; and is now crossed by a railway bridge 3.4 miles from Welney.

Use this link to view a straight line along the full 12-mile stretch.


3. Proposal for a new experiment

Rowbotham's original concept of his 'Experiment 2' is sound; but to improve on the results the observer and the targets should be raised higher, thereby diminishing the effects of refraction.

Also, to best relate the results to a modern audience, the experiment should be recorded with photographs and video.

To begin, the following criteria are established:

a) The observation points

The sluice gate at Welney, with accessible viewing platform: 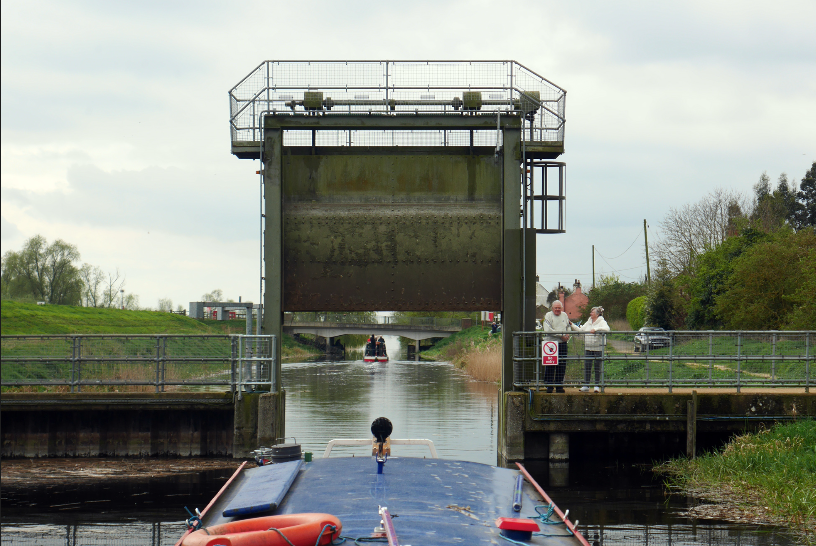 The road bridge at Salters Lode: 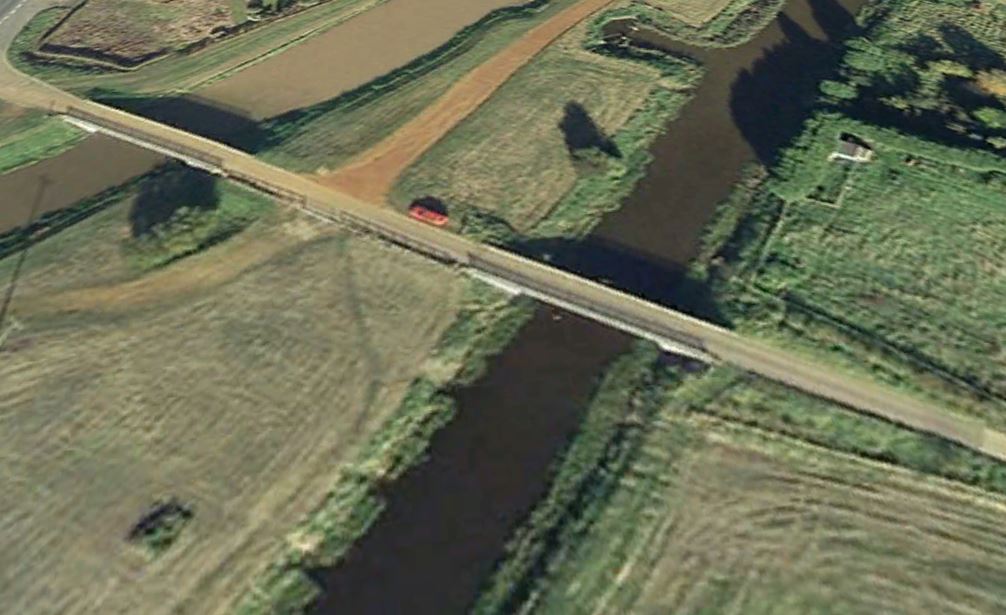 As the road bridge provides both greater accessibility and elevation above the river, it is proposed that this be the observation bridge - though, if possible, as Wallace did in 1870, observations could be taken from both points.

The targets will each be placed on top of straight poles sitting perpendicular to the water. For the poles, plastic plumbing pipes have been suggested, such as these 3-metre-long drainage pipes, whose 110mm diameter should provide the necessary stiffness to ensure they remain upright and plumb: 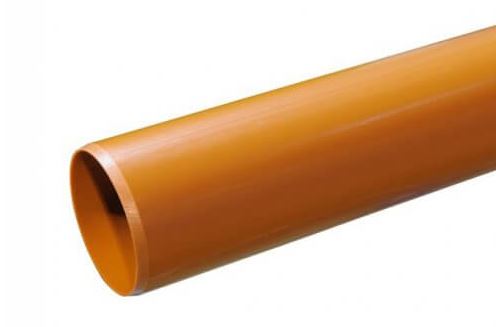 To achieve the necessary height, the pipes will either be joined together, or smaller (also stiff) pipes inserted into them, in order to extend them.

The pipes themselves will be painted in stripes 12 inches deep, for easy reference, and to verify that the pipes are all identical.

The targets should measure at least 3 feet high and 3 feet wide - whether circular, rectangular, or square - so as to be visible from distance.

Both the road bridge at Salters Lode, and the sluice at Welney, being of measurable heights, can also be used as additional targets.

A Nikon Coolpix P900 should do the trick. Telescopes are also welcome. And if we're lucky with the weather, the naked eye may even suffice.

Rowbotham's diagrams in the brief history show that different shapes for the surface of the river will produce different results in observation.

For example, if the surface of the river is flat, for an observer at the same height as the targets, all the centres of the targets will appear aligned, like so:

Fig 7. Predicted observation for a flat river (camera at same height as targets) 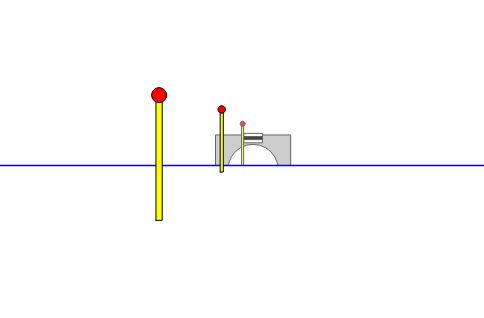 Similarly, if the surface of the river is curved, for an observer situated around 6 inches higher than the height of the targets, the middle target will appear higher than the other two:

And, likewise, this cannot happen if the surface of the river is flat, even if the camera/observer is raised, lowered, or tilted.

This is demonstrated in the 'scale model' video below: 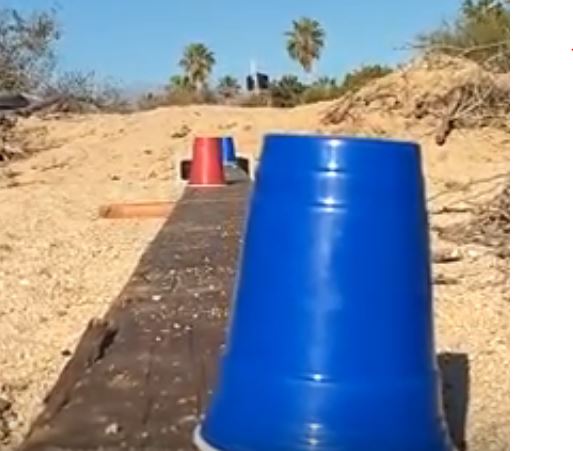 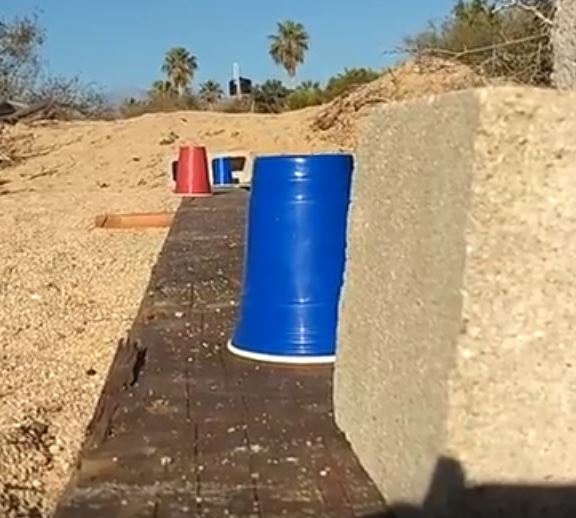 Fig 11. Curved board showing middle target raised higher (note how it's not possible to tell that the board is curved with the naked eye)

These two mutually exclusive outcomes are one of the simplest ways to confirm the result of the experiment.

To summarise:
Other predictions: 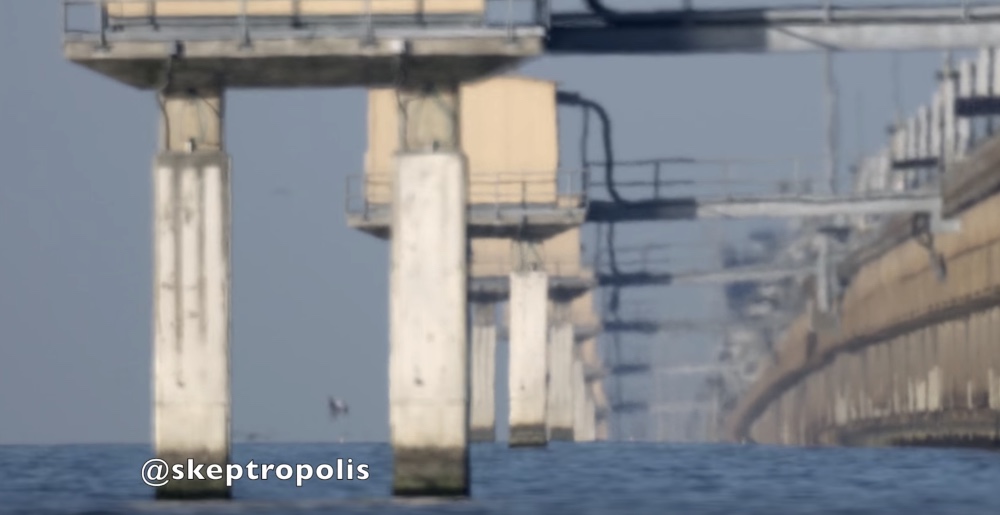 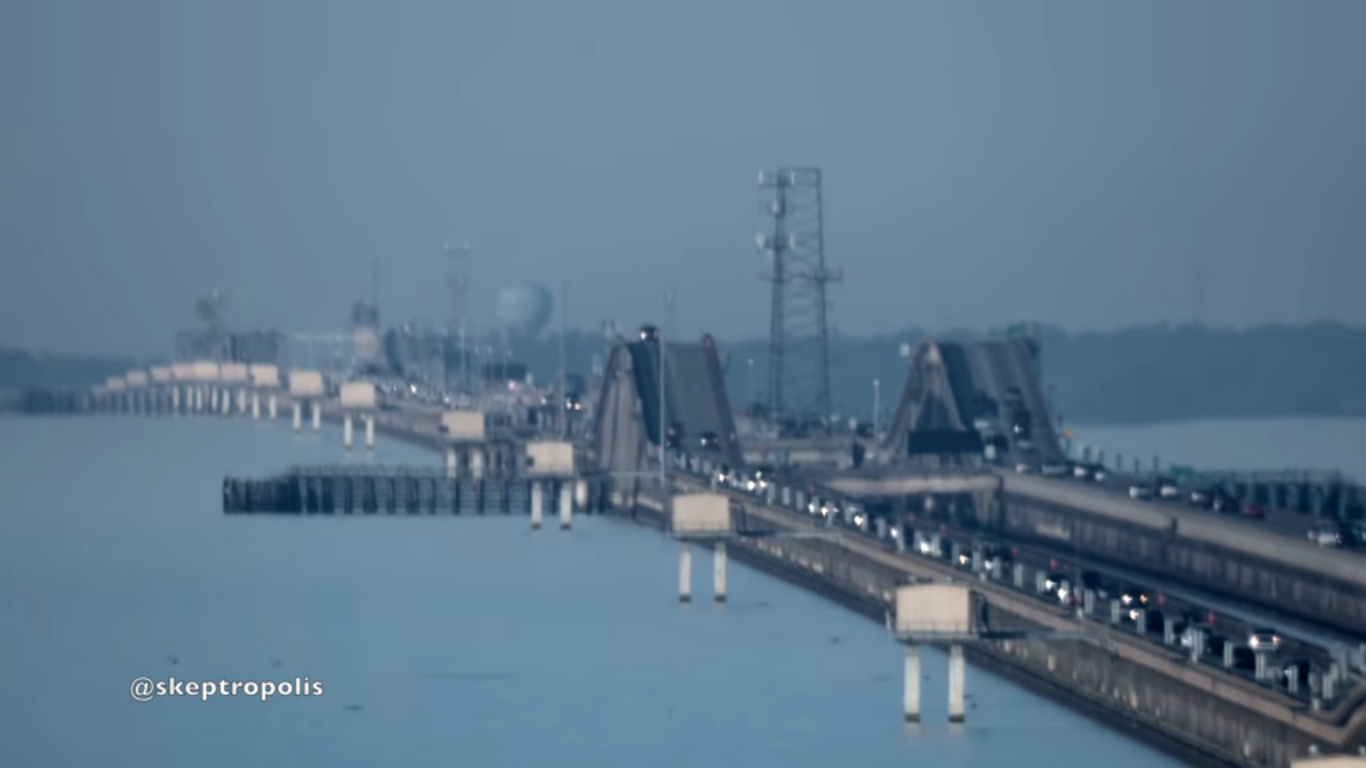 Any questions? Any suggestions for improvements? Any feedback from those who doubt that this experiment will demonstrate the shape of the earth's surface?

Obviously Soundly's already done that - but Bedford Levels certainly has its advantages, in terms of allowing all-comers to be involved and take a hands on approach, as well as the considerable historical context.

Feel free to share this with all who may be interested. Perhaps the UK flat earth believers can make the trip to the Cambridgeshire Fens again. Collaborative investigation and discussion would certainly be welcome.

Very good. Details, the Welney gate platform is only about 9 feet high at waist height. The Salter's lode bridge would be higher, i.e. same height as Welney bridge.

An alternative would be a view from the NW side, in fact the same side the Wallace experiment took place, or ask EA for the sluice to be lowered temporarily.

I love the idea of recreating a historical experiment.

It all looks very promising. On the methods, I note that Wallace used both a telescope and a surveyor's level, the latter at the insistence of the flat-earthers. Theodolites etc. can be hired, see surveyequipment.com/hire/ I'd be happy to chip in if it is decided to use one. Of course they do require more prior practice than a telescope.

I agree that the OBR is probably the longest stretch of suitable water in the UK. I haven't been able to find anything as good elsewhere in the Fens. Wallace originally proposed to use Lake Bala in Wales, but that is not as long. Loch Ness in Scotland and Lough Neagh in Northern Ireland are both inland water bodies with much longer uninterrupted lines of sight (around 20 miles), but for other reasons they are not suitable for Wallace-type experiments, being too deep and probably too wavy. I mention them because they could be useful for other observations, e.g. the distance at which boats go over the horizon.

DavidB66 said:
On the methods, I note that Wallace used both a telescope and a surveyor's level, the latter at the insistence of the flat-earthers.
Click to expand...

I would suggest not, as the theodolite and the crosshair were the fundamental source of confusion. The telescope is enough, as Wallace pointed out.

The theodolite could be used to show that the targets are located increasingly below the horizontal (i.e., below eye level).

But the main point is showing whether the middle target is raised or not: anything in addition to that is really 'bonus material'.
Last edited: May 21, 2018

I highly recommend local trial setups and tests before traveling long distance to the site. Try out your pole mounting system in a muddy creek bed and hard surface or whatever conditions may be expected. Is it easily adjustable for vertical and resistant to wind? Also set up your targets at the full distances to check if they're big enough and have high enough contrast for your video camera. Six miles is a very long way to spot a small target. Even if you don't have a suitable body of water, maybe try lining up some targets at the full distance to see how hard it is. Jeranism had difficulty with that on his 3 mile stretch of canal. Refraction may make the experiments inconclusive or confusing, as was sort of the case at the rainy lake experiment. One flaw of the Rainy Lake experiment was that the targets were staggered left to right, not in order of distance. This made the result less visually obvious.

I shall be going up to Downham Market later this year to have a scout around, and will report back. As I pointed out in another thread, the 3 mile mid point is accessible by vehicle, not sure about any other points.

The absolutely key thing is to agree on what is predicted by each theory (see Rory's mock up above). Rory has posted the different predictions on another website, no reply from Flat earthers.

The failure of Wallace's experiment lay precisely in that. Both agreed what was seen after the event, but both thought each of the theories predicted it.


Rory said:
The theodolite could be used to show that the targets are located increasingly below the horizontal (i.e., below eye level).

But the main point is showing whether the middle target is raised or not: anything in addition to that is really 'bonus material'.
Click to expand...

edby said:
I shall be going up to Downham Market later this year to have a scout around, and will report back.
Click to expand...

Is this still ongoing?
I live near The Old Bedford River and am happy to help out if required. I would like to see this happen. My sister has recently become a flat earther and needs help to either prove or disprove this notion.

I also know a lot of plane enthusiasts that have huge camera lenses if they might be useful.
Last edited: Mar 7, 2019
You must log in or register to reply here.