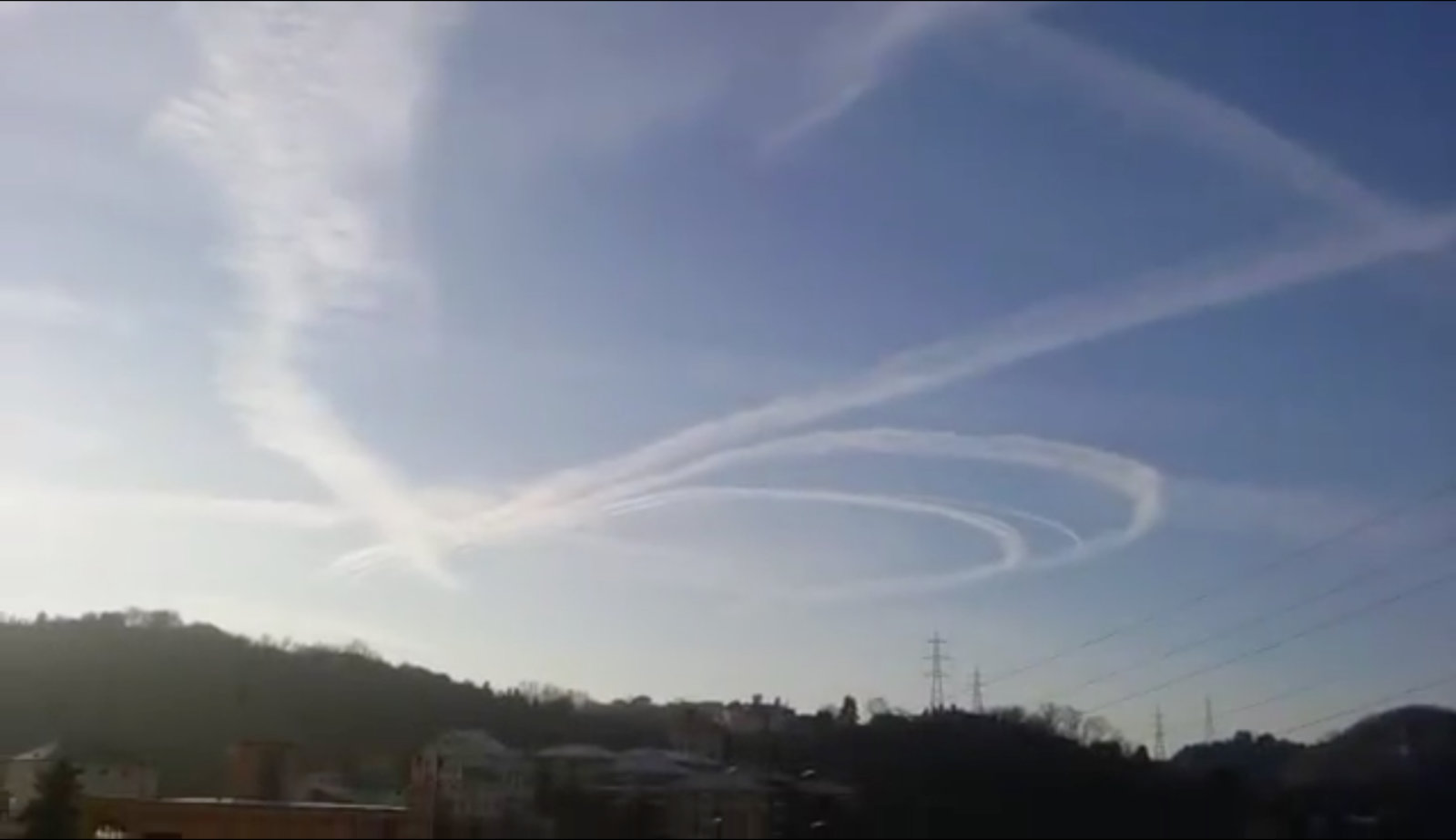 Also, there is a photograph of the same or similar contrail taken at approximately the same location and posted at about the same time (08:50 UTC): 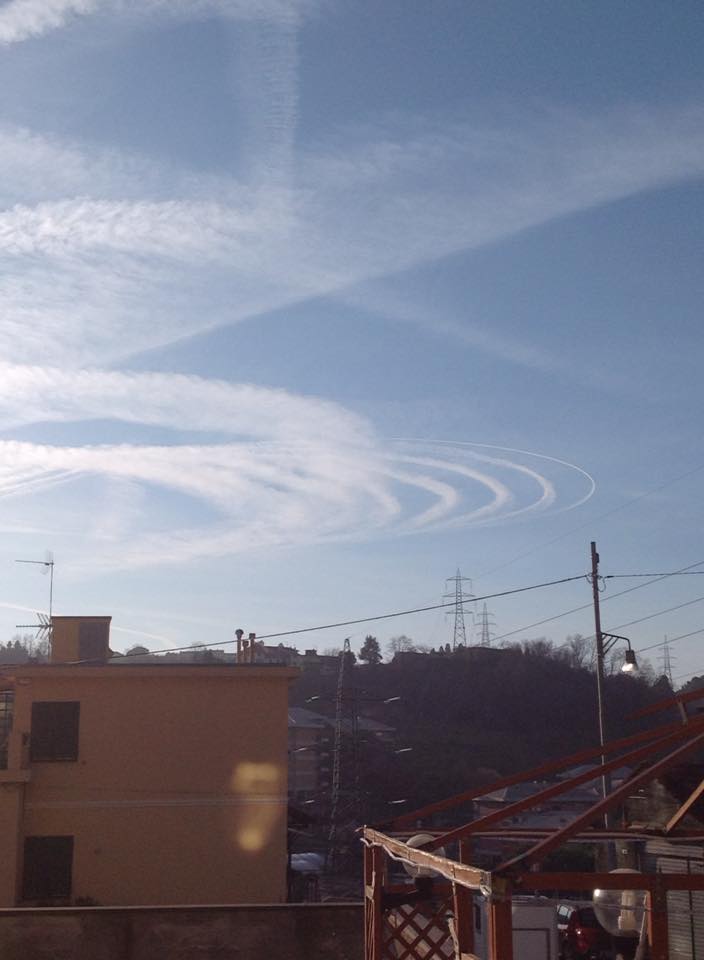 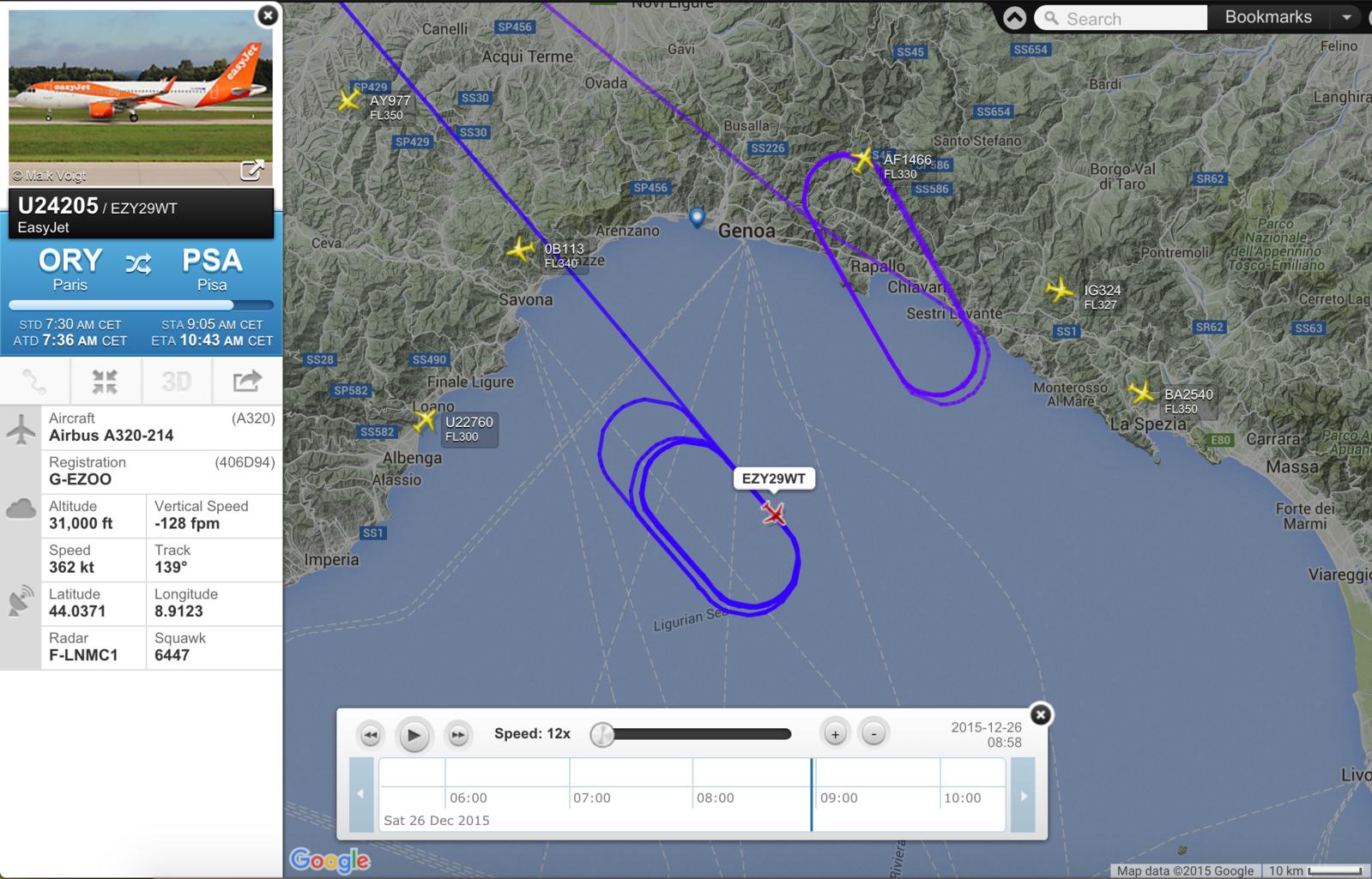 These flights were going from Paris to Pisa and Florence, respectively, but after being held near Genoa for an hour because of fog at the original destinations both flights were eventually diverted to Bologna.

I have located in Google Earth the transmission towers (electricity pylons) from the above video and photo and identified their common viewing direction (South): 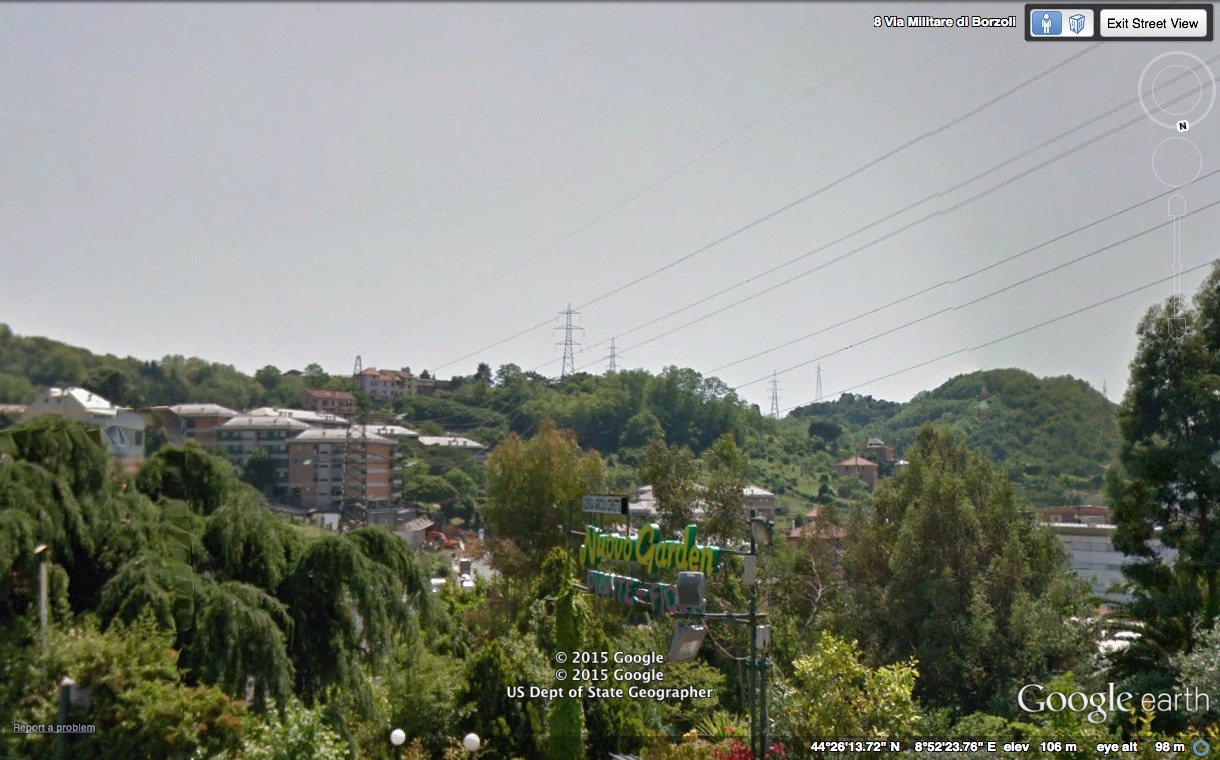 This means that both video and photo captured the trail from the EasyJet flight. The Air France flight was held east of Genoa at altitude of 33000 ft, that is, 2000 ft higher than the EasyJet flight. Its observation could have been obscured by the Genoa geography, but a few partial images of its racetrack contrail taken from the same location are available from this blog: 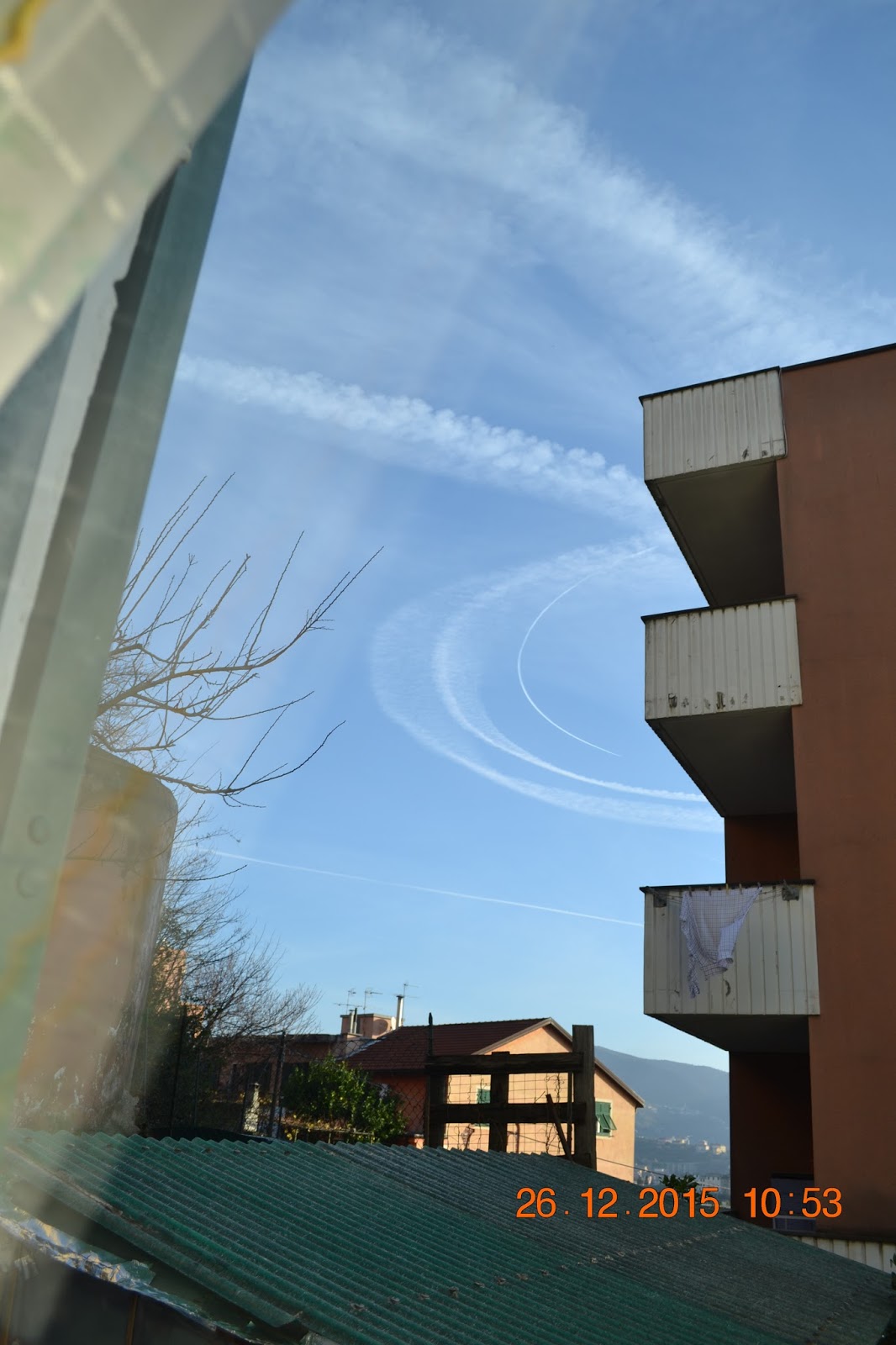 See discussion below for more details.

PS Special thanks to @deirdre for sharing info on the FB post.
Last edited: Dec 28, 2015 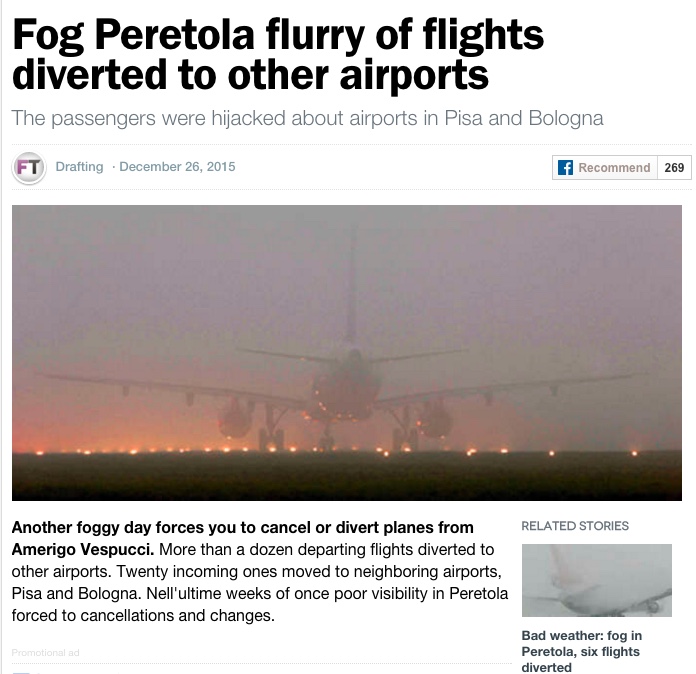 Ten flights have been received so far in Bologna three airports that have soffertom problems fog.

Content from external source
Beaten to it by the boss
Last edited: Dec 27, 2015

Staff member
Some coverage in the Italian press:
http://www.ilsecoloxix.it/p/genova/2015/12/26/AS75T6v-cogoleto_dirottato_arenzano.shtml 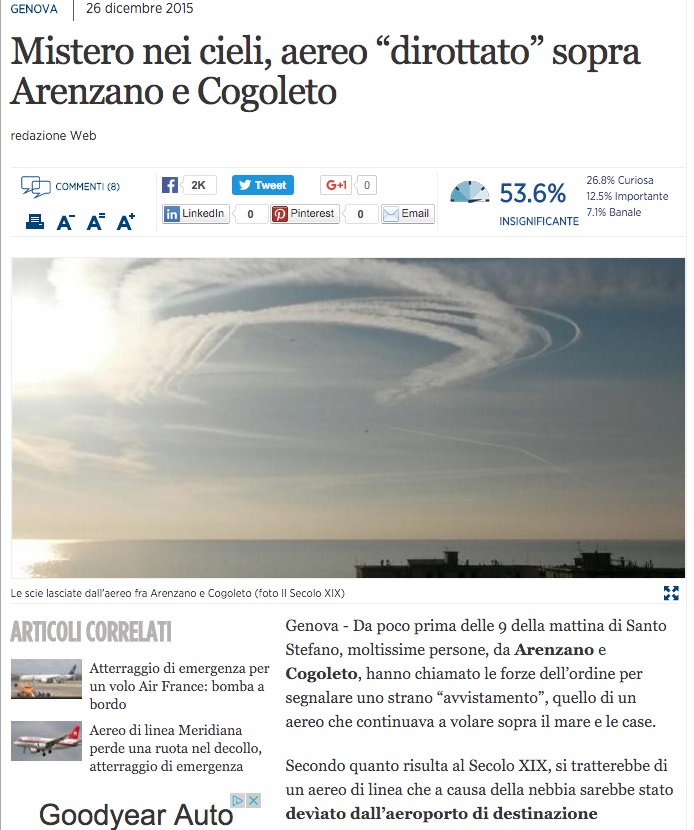 Again with the unfortunate translation of dirottati: 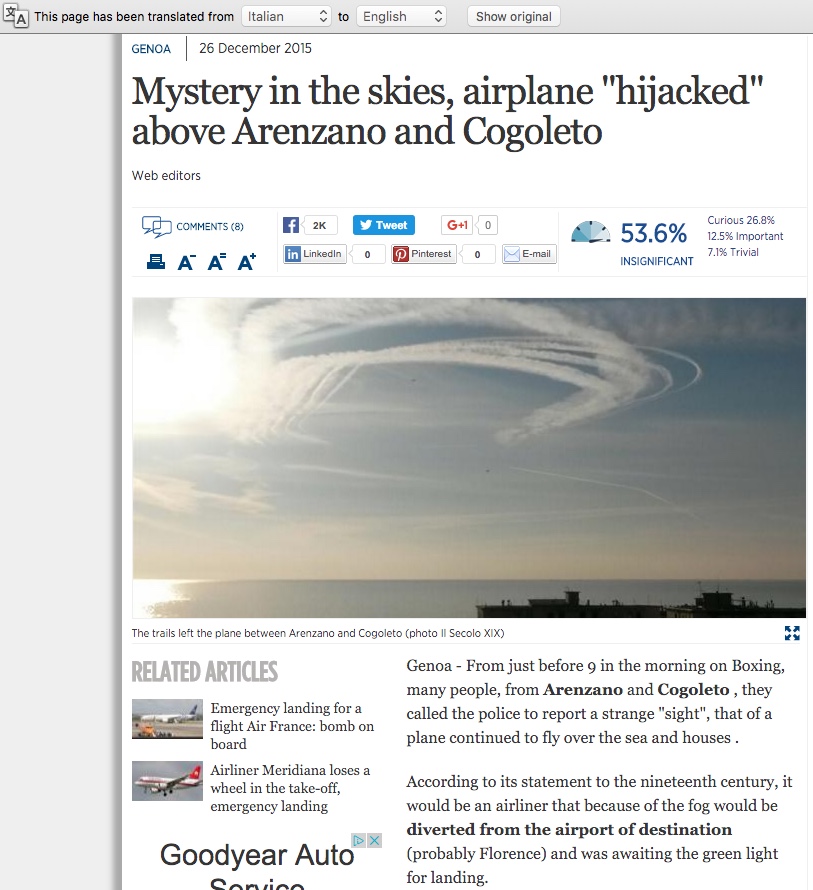 Yes, I've meant this one. However, there is another contender, EasyJet U24205, that was flying hold pattern over the sea south of Genoa at the same time: 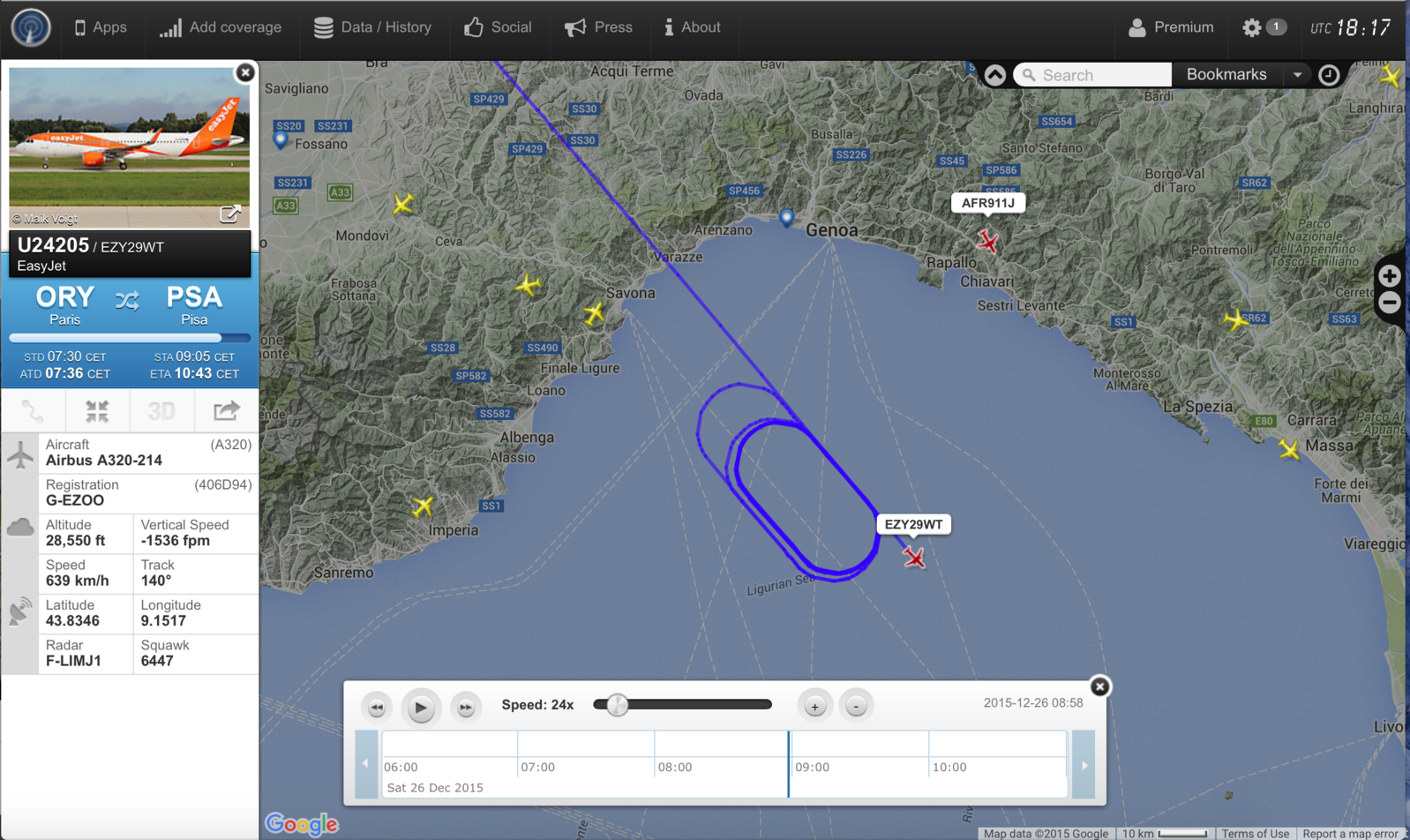 The pics in the previous post by @Mick West are probably of the EasyJet contrail.

Staff member
Looks like seven or eight circuits in the photo: 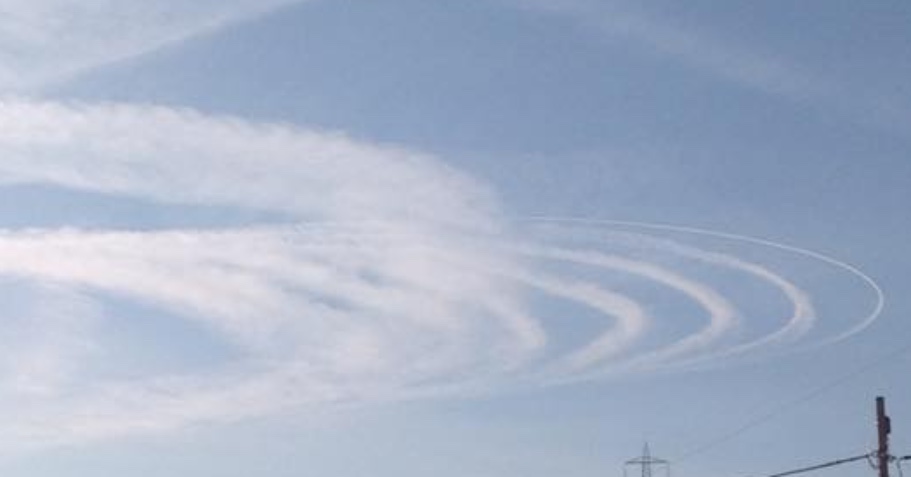 Should be able to match that to FR24

Mick West said:
Looks like seven or eight circuits in the photo:

Should be able to match that to FR24
Click to expand...

It also looks like the trail entering the holding pattern and the adjacent turns from the video give a better match to the EasyJet track: 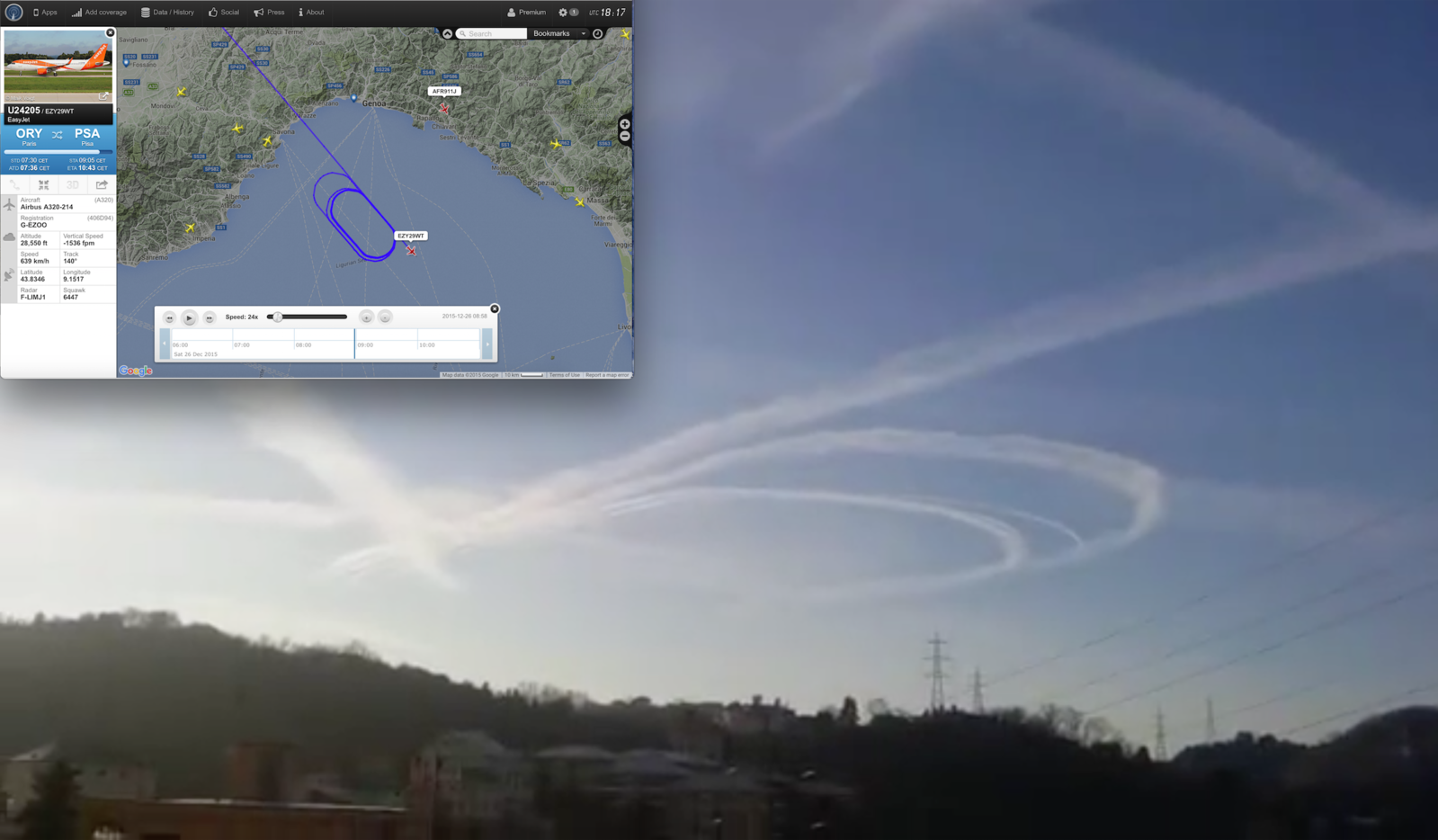 @Mick West Could you modify the title to include this flight. I've already modified the OP, but do not know how to change the title.

Trailspotter said:
@Mick West Could you modify the title to include this flight. I've already modified the OP, but do not know how to change the title.
Click to expand...

I have located the transmission towers (electricity pylons) in the OP video and photo and identified their common viewing direction:

This means that the trail captured in both of them was from the EasyJet flight that was held 20+ miles south of the Genoa airport.

BTW, Harry Rhodes "concluded" from the video that these towers are just below these trails. 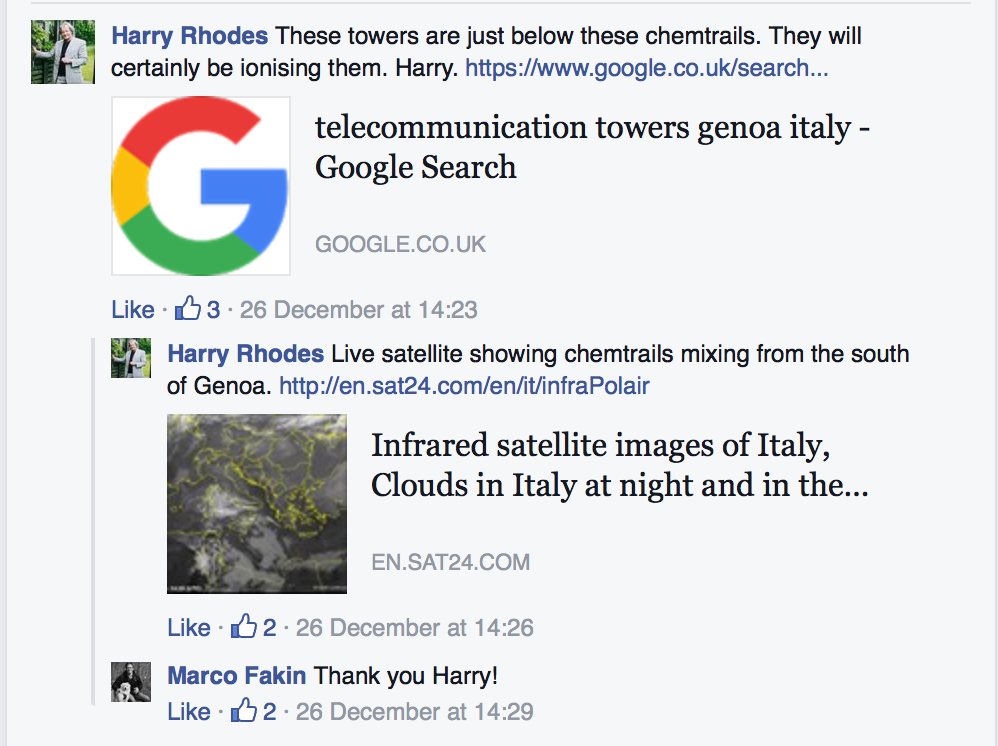 I have updated and revised OP.

The reddish house with balconies is just behind the viewpoint of the StreetView image in the previous post: 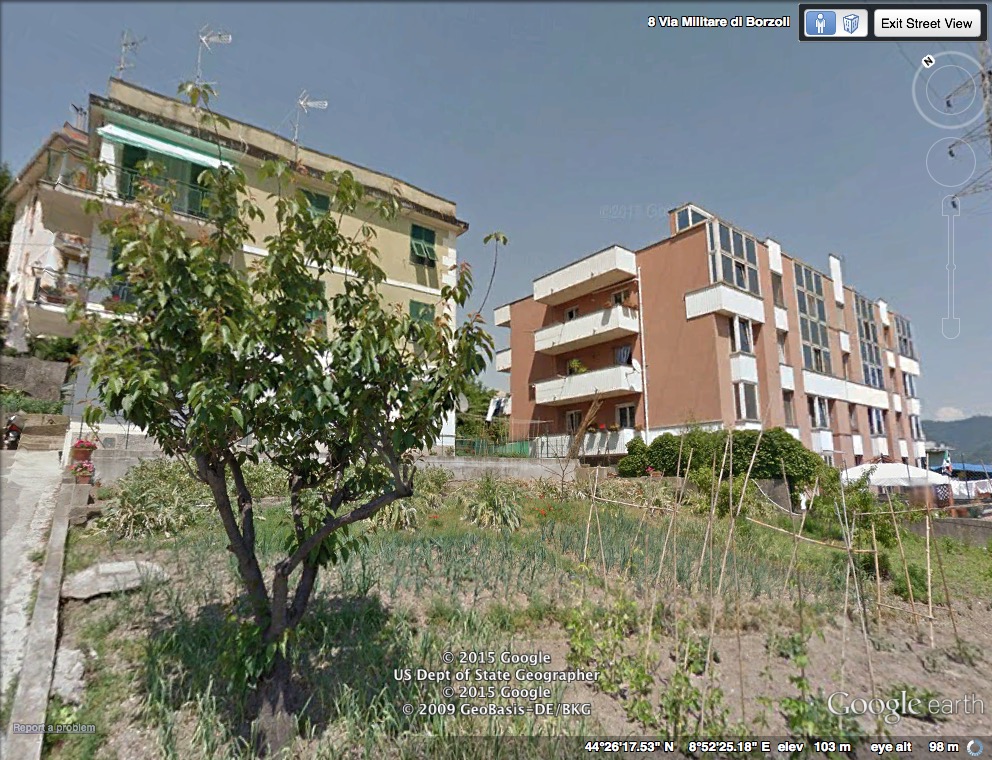 It was blocking view on the other racetrack trail that was in easterly direction (that is, exactly where the Air France flight was held), but the northern end of the holding pattern was sticking out a bit.
Last edited: Dec 28, 2015

Trailspotter said:
BTW, Harry Rhodes "concluded" from the video that these towers are just below these trails.
View attachment 16860
https://www.facebook.com/idromarco/posts/1230480320302678

I have updated and revised OP.
Click to expand...

Can Harry really not tell the difference between a pylon and a transmitter tower??


BTW I don't think the times can be correct for both the photos in the OP. They seem to show the same contrail loops, but the second one has around four more circuits, and the straight contrail adjacent to them has spread out a large amount. There has to be more than four minutes between the photos.

Trailblazer said:
BTW I don't think the times can be correct for both the photos in the OP. They seem to show the same contrail loops, but the second one has around four more circuits, and the straight contrail adjacent to them has spread out a large amount. There has to be more than four minutes between the photos.
Click to expand...

These are the times of FB posting, not when the video and photo were actually taken. The latter can be deduced from the FR24 playback by counting the turns.
You must log in or register to reply here.
Related Articles
Racetrack Contrails and "Bizzare" Planes off the Yorkshire Coast
High altitude holding patterns and racetrack contrails
Drone disruption at Gatwick...
Two planes in Germany flying Racetrack patterns together [Likely Eurofighter Typhoon Practicing]
Curved and Looped Contrails in SoCal [San Diego Delays]
Crazy Contrails from LAX Ground Stop
Explained: Photo of 747 with Contrails Only on One Side [Fake, April Fool]
Infrared Photos of Clouds and Contrails
Moonlight Contrails
YouTube adds Encyclopedia Britannica article on Contrails to "Chemtrail" Videos
Aerodynamic Contrails at 27,000 to 31,000 feet near Sacramento
Sharp boundary between contrails and clear sky
Plane Flies in Front of Super Blue Blood Moon Eclipse
Contrail lobes or mamma? The importance of correct terminology
How Changing Weather Conditions Make Contrails Show Up
Contrail cross over Tasmania and spinning contrails over Victoria
Explained: Manurewa NZ, 'Extra-terrestrial' Fireball Jumps Up [Contrail, Altitude change]
Halifax, NS: Regularly Spaced Gaps in Contrails [Ethiopian Flight 501]
Some Perspective on Perspective Foreshortening - Contrails and UFOs
Explained: Viral Video of 787 Leaving Thick Contrails with Forced Perspective
A Plane Flying Across the Face of the Sun, with Contrails [Virgin Flight 353]
Contrails filmed from commercial flight over the Irish Sea - 6th May 2017
Contrails 'breaking up' clouds
Can someone tell me what these are? [Grid pattern contrails]
Can someone please explain these trails at sunset [Contrails]
There Are No New Clouds, Just New Latin Classifications
BBC: Biofuels 'could limit jet contrails'
Spiral Contrails viewed from the International Space Station
Claim: Satellite imagery showing 'sheet' of contrails
GOES-16 Satellite Images of Contrails
Explained: Contrails Appear "Hot" in Thermal Imaging because the Sky Appears Very Cold
Explained: Chilean Navy "UFO" video - Aerodynamic Contrails, Flight IB6830
Why do inner contrails spread more than outer contrails?
Contrails Hidden In 1950s and 1960s Family Photos
Four Engines, Flying West over Sacramento
Persistent Aerodynamic Contrails From Propellor Tips
A Sunlit Contrail Viewed From the Side
Close Up Videos of Contrails Forming And Evolving
Some "Black" Shadowed Aerodynamic Contrails
Relative Humidity at Flight Altitudes. Resources and Contrail prediction.
What's the Highest Contrail You've Taken a Photo Of?
P900 Plane and Contrails Photos and Video
Persistent Aerodynamic Contrail Forming @28,500 on 787
Problems with Identifying Contrails in FlightRadar24
Why Were There Contrails Today, But Not Yesterday? It's the Weather!
How Do You Take Good Photos of High Altitude Planes and Contrails?
Debunked: Irrefutable Film Footage Of Climate Engineering Aerosol Spraying [Aerodynamic Contrails]
Contrails over Sting & Peter Gabriel Concert in Lake Tahoe
Giant Dark Persistent Aerodynamic Contrail
Contrails in USA vs. Austraila
Share:
Facebook Twitter Reddit Pinterest Tumblr WhatsApp Email Link