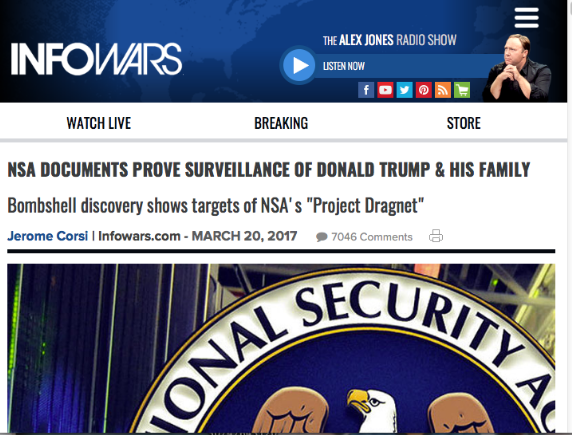 WASHINGTON, D.C. – Infowars.com have obtained credible information from law enforcement sources regarding individual records of U.S. citizens under National Security Agency (NSA) electronic surveillance in the years 2004 through 2010 – a database that suggests both Donald J. Trump and Alex Jones were under illegal, unauthorized government monitoring during those years.

The author cites an electronic database provided to him by Michael Zullo, an investigator for Joseph M. Arpaio, formerly the sheriff in Maricopa County, Arizona. Zullo claims he was provided the database by an unnamed whistleblower in 2013.

Infowars identifies “Project Dragnet” as an NSA program first mentioned in media accounts back in 2005 and later by Eric Snowden in 2013.

The database allegedly lists an extensive number of Trump enterprises and employees who were under surveillance.

Infowars' primary claim here is that Trump has been under surveillance by the NSA since 2004. Its main sources of evidence of this are two videos of Alex Jones. Like a snake eating its tale, Infowars' best source is Infowars.

The other “evidence” cited includes a series of media reports on American surveillance programs that have nothing to do with “Project Dragnet.”

So far, I haven’t been able to find any actual documentation for a “Project Dragnet.”

One of the source links provided in the Infowars story contains the term “dragnet” as a way to describe NSA data collection, but not as an actual program. I think Jerome Corsi, the author of the article has confused the description with a secret operation.

As a postscript, Michael Zullo made the news back in December 2016 by repeating the thoroughly debunked claim that president Obama’s birth certificate was a fake. I am including it to challenge Alex Jones’ attempt at making an argument from authority.
http://www.abc15.com/news/region-ph...to-talk-obama-birth-certificate-investigation

and just because it's funny
the alex jones article says


A whistleblower by the name of Dennis Montgomery brought forward information that Montgomery alleges was collected while he was employed as a subcontractor for the NSA, working on various surveillance projects.

Court documents do verify Montgomery was contracted by the NSA, in part to develop computer breaching software that has been utilized in government mass surveillance operations targeting American citizens without legal justification.

While Montgomery’s credibility has been called into question, Zullo maintains that


Montgomery provided copies of what he said were Trepp's personal e-mails that he accessed while working at eTreppid Technologies.[13] Gibbons' lawyers claimed they had evidence Montgomery fabricated the emails[14] and presented computer expert evidence in trial that challenged the authenticity of Montgomery's alleged evidence.[15] An 18-month FBI investigation resulted in no charges and Gibbons being "cleared" of all charges by the Department of Justice. Similar reviews by the Nevada State Ethics Commission and U.S. House Ethics Committee also cleared Gibbons.

Confidential informant for Sheriff Joe Arpaio
In June 2014, reporter Stephen Lemons of the Phoenix New Times wrote that Montgomery had been hired by Sheriff Joe Arpaio of the Maricopa County Sheriff's Office as a confidential informant.[16] Lemons, citing an anonymous source in the Sheriff's Office, said that Montgomery had claimed that, using data he had obtained while working for the CIA, he could prove there was a conspiracy against Arpaio between the U.S. Department of Justice and G. Murray Snow, the federal judge presiding over a racial-profiling lawsuit filed against Maricopa County. In April 2015, Arpaio confirmed the confidential informant relationship in testimony before Judge Snow.[17] Arpaio later characterized the result of Montgomery's investigation as "junk".[18] https://en.wikipedia.org/wiki/Dennis_L._Montgomery