A fresh photo was published on http://www.spaceweather.com/ 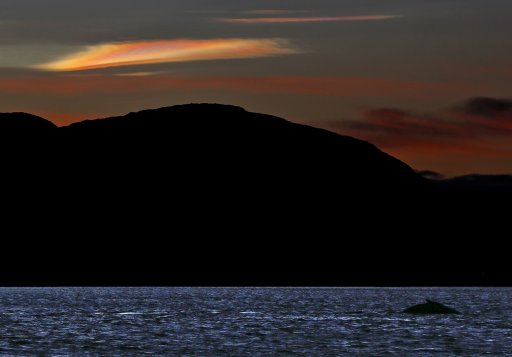 Here is the explanation from the portal page:


Yesterday evening, Dec. 28th, Marcus Åhlund was whale watching [...] off the coast of Tromsö, Norway, when the darkening sky suddenly lit up with color. It wasn't the aurora borealis. It was a polar stratospheric cloud: [...]

Lately, Arctic sky watchers have been seeing a lot of PSCs. Also known as "nacreous" or "mother of pearl" clouds, icy PSCs form in the lower stratosphere when temperatures drop to around minus 85ºC. That's how cold it has to be for ice to crystalize in the stratosphere. High-altitude sunlight shining through tiny ice particles ~10µm across produce the characteristic bright iridescent colors by diffraction and interference. Once thought to be mere curiosities, some PSCs are now known to be associated with the destruction of ozone.

"Polar stratospheric clouds far outshine and have much more vivid colours than ordinary iridescent clouds, which are very much poor relations and seen frequently all over the world," writes atmospheric optics expert Les Cowley. "Once seen they are never forgotten."

The best time to look for PSCs is just before sunrise or right after sunset, when the ground is dark but the upper atmosphere is still illuminated by sunlight. [...]

Further discussion about this type of cloud can be found in this Metabunk thread.

As a side remark, recent solar activity may spark off aurora displays even at lower latitudes during the next hours.
Last edited: Dec 30, 2015

There is a similar recent thread in chitchat:
https://www.metabunk.org/polar-stratospheric-clouds.t7108/#post-172374

Trailspotter said:
There is a similar recent thread in chitchat:
https://www.metabunk.org/polar-stratospheric-clouds.t7108/#post-172374
Click to expand...

Thanks, I'll include a link in the OP. It's not a subforum that I visit regularly.
You must log in or register to reply here.

Above or Below: How to tell if a contrail is above or below a cloud layer