HappyMonday said:
Have you seen this thread?

Thanks for this thread by the way, I didn't see it.

Here's a post that was never addressed or debunked:


Chuck said:
This is one of the main points that I think has been ignored in this thread. The exploded backpack has a rather distinct white square as shown in the photo below as well as the photo Mick posted. 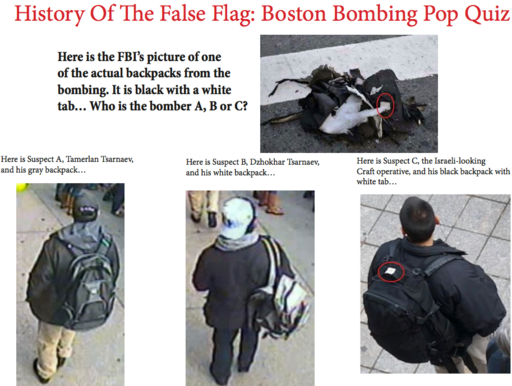 1. If both backpacks were used by the brothers to execute the bombing, why is the younger brother seen with his backpack after the bombing?
2. The exploded backpack, though dark like the Tamerlan's (the older brother), has that distinctive well defined white square which does not appear on the Tamerlan's backpack (not the same contrast) yet looks very much like the law enforcement officer's backpack. And though it could be the exposure of the photo, the exploded backpack looks much darker than Tamerlan's (which appears to be more of a grayish color).
So, alhough I'm not convinced that Craft or Blackwater operatives were involved in the planning or execution of the bombing, I am perplexed by this one issue. Thanks for any help you can give me on this. Perhaps it's already been debunked and if so please let me know of the thread.
Click to expand...

"1. If both backpacks were used by the brothers to execute the bombing, why is the younger brother seen with his backpack after the bombing?"

For clarity, this aspect of the original post was erroneous. Here's a picture of Dzhokhar no longer wearing his backpack after the explosion - 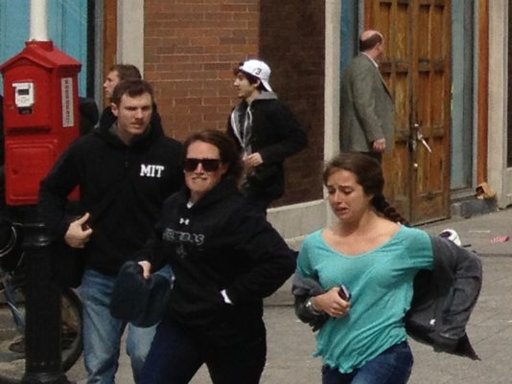 HappyMonday said:
"1. If both backpacks were used by the brothers to execute the bombing, why is the younger brother seen with his backpack after the bombing?"

For clarity, this aspect of the original post was erroneous. Here's a picture of Dzhokhar no longer wearing his backpack after the explosion -

A debunking video I found disputing photo's authenticity from someone claiming to be photo expert..

Craft International? Most evidence points to them being National Guard Civil Support teams and even InfoWars is acknowledging that fact - http://tinyurl.com/buoq3po.

So, why were they there? Because the event draws close to 23,000 runners alone and you couldn't expect every Boston PD member to be there. They needed help. Plain and simple. Also, we don't know if that guy really is from Craft International or if he just purchased his hat from their website. However, my biggest question is this; if you they were undercover WHY would they wear company insignia and give it away? If you went to rob a bank, would you wear a coat with your name and workplace on it?

Banned
I really like that you claim that skeptics believe everything about every official story. Yet here you take the fact that the media got a hold of a leaked photo of a shredded backpack in the street and you take their word for what it is. There is no official story for the picture of the backpack. There is no released documents to say what this photo is but since someone has been able to spin a tale that fits your world view you take this piece of media reporting and latch onto it like it is some kind of holy grail proof.