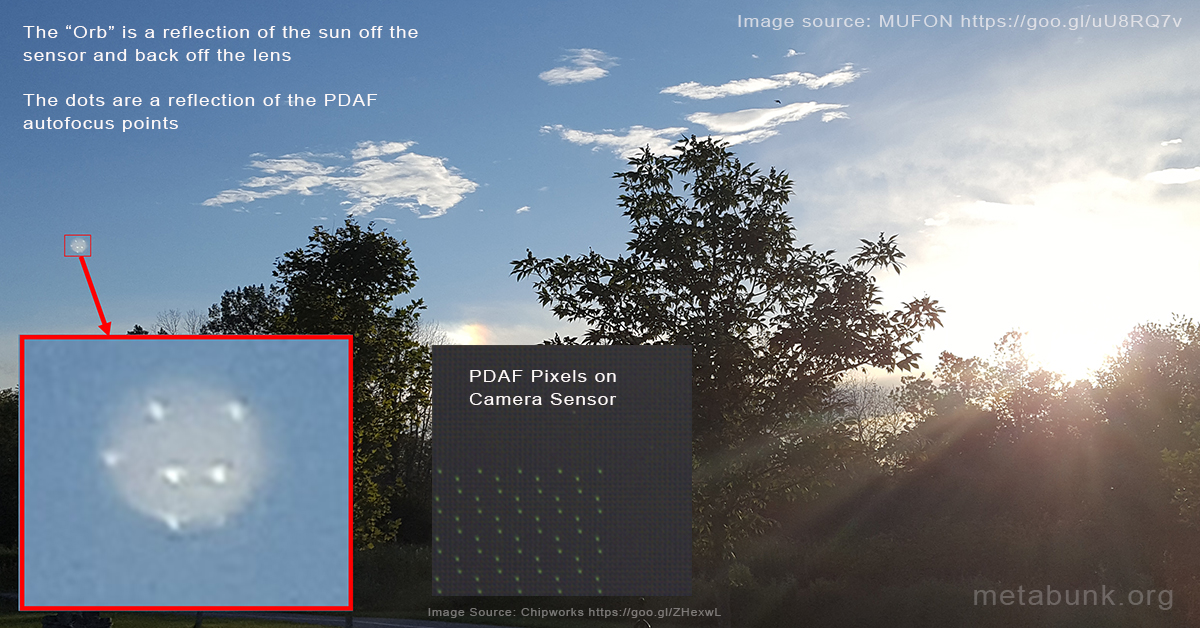 A variety of images reported as "UFO"zm show what looks like a glowing disk with some dots on it. These basically look like lens flares, but the dot patterns are unusual, as they vary from irregular, regular, or or semiregular patterns. However they still look very two dimensional - they don't seem to curve around the "orb". Here's a collection of similar images all claimed as "UFOs" 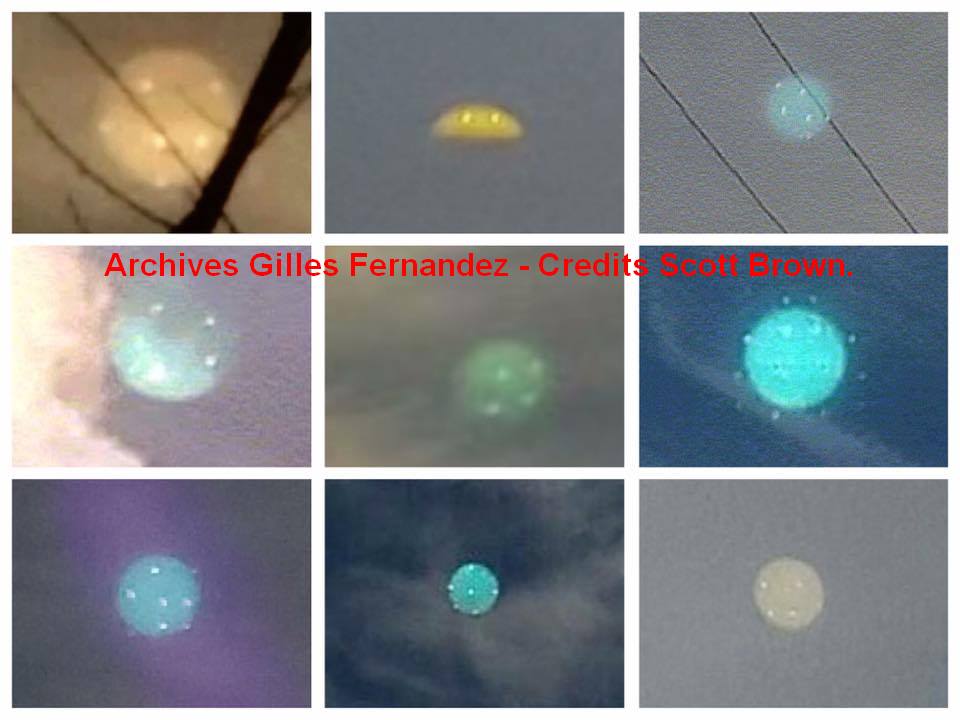 What we are seeing here is a reflected image of the sun with the highlighted reflections of focus pixel. 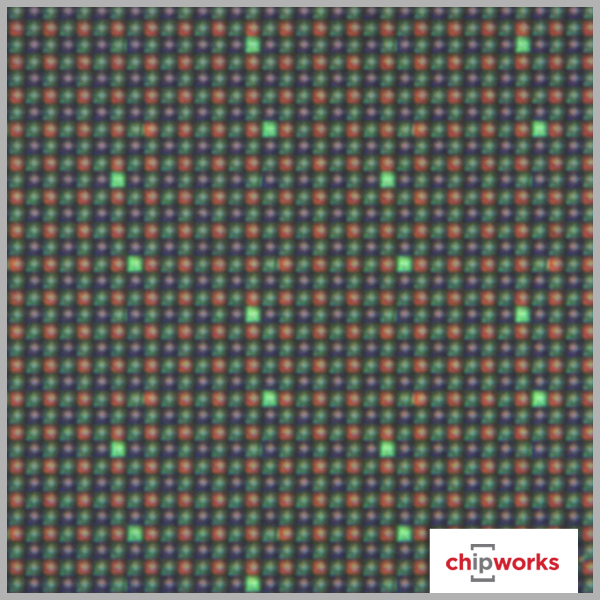 Focus pixels like these first showed up in large numbers in Samsung Galaxy phones. As you can see in the close-up picture above it's a modification of some of the green pixel sensors. More fully called "passive autofocus phase detection pixels", or Phase Detection AutoFocus (PDAF) pixels. It works by shielding pairs (or paired groups) of pixel in such a way that by comparing the light between the two the camera can detect if the light hitting from two directions is in phase, and hence in focus.

It's complicated, but the simple fact is there's this irregular grid of pixels on many sensors. 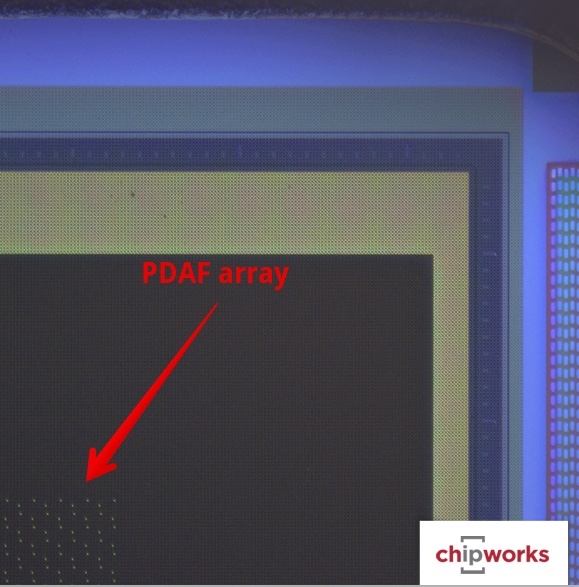 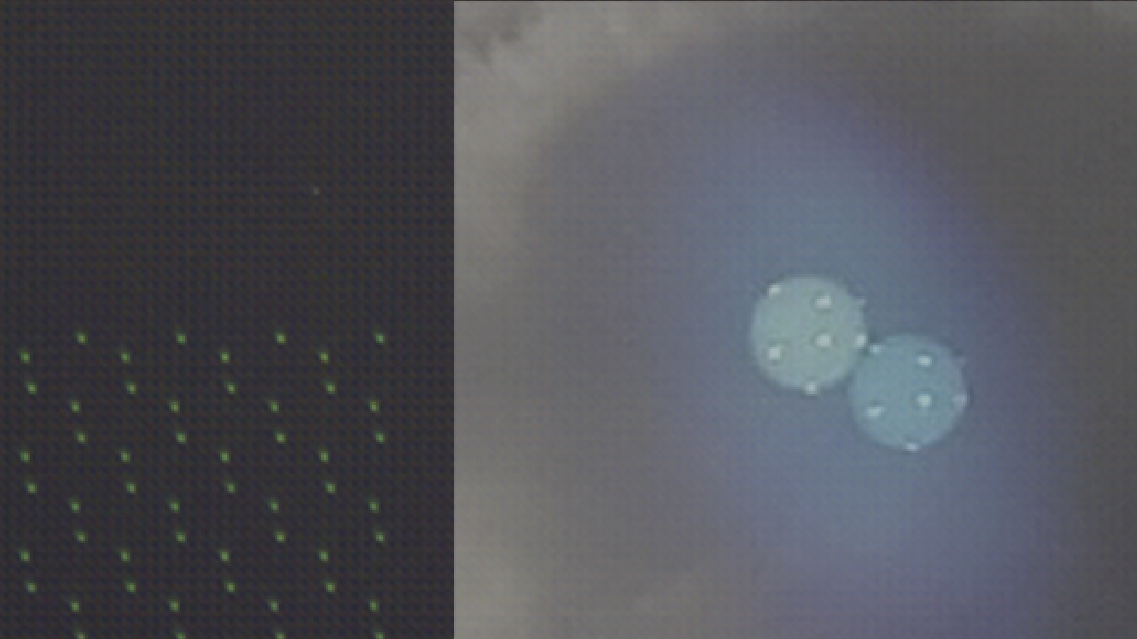 So essentially the image of the bright sun, shining in the lens, is reflected off the sensor. The masked PDAF pixels show up brighter due to the covering material (which is why they show up in the microscopic pixels, above). This pattern then reflects off one layer of the lense assembly and back on the sensor.

Put another way what we are seeing is the image of the sun as it is projected onto the sensor. You'd see the same thing if you could somehow get a tiny camera inside the phone camera.

These dotted images are going to vary with camera because of different sensors (not all have PDAF), and different lens assemblies. Double reflections can be caused by additional layers of glass, like lens protectors, or may be the result of shooting through a window.

These image might become less common in the future, as Samsung has phased out the PDAF array with a new technology in the Galaxy S7, Dual Pixel Autofocus which eliminates the need to mask pixels as it uses ALL the pixels by having two sensors per pixel. See:
http://www.phonearena.com/news/Gala...l-Pixel-autofocus-heres-what-it-means_id78701 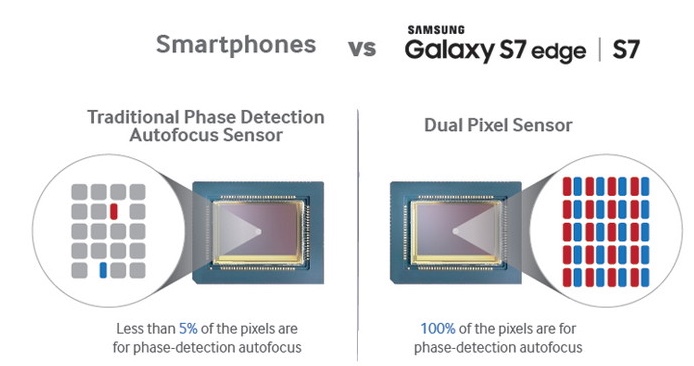 The majority of the images seen so far seem to be from Galaxy S5 or S6 phones. S7 phones will make an orb, but with no dots. I've not seen it on an iPhone.
Last edited: Jun 30, 2017
Click to expand...

Administrator · From Sacramento
See:
https://www.metabunk.org/threads/about-metabunk.1966/
Staff member
Another example cropped up in the news a couple of days ago:
http://www.nh1.com/news/weird-light-in-nh-sky-has-people-asking-if-ufo-visited-the-granite-state/ 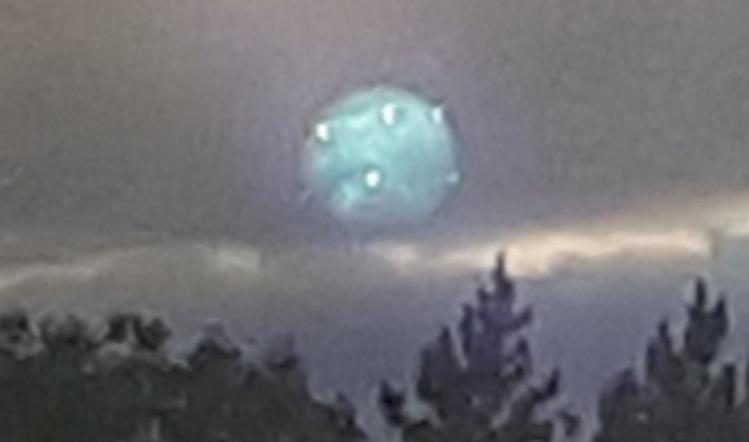 MERRIMACK — UFO sighting or lens flare? One picture taken in Merrimack has people questioning what that weird light inthe sky is.

Trish Wilson sent in the above photo to NH1 News asking, "What is this?" NH1 meteorologists took a look at the photo and said it looked like some sort of refraction of light from the sun interacting with the clouds.

UFO Stalker gained access to the picture, calling it sighting number 84622. According to their site, New Hampshire has had 500 other UFO sightings, including one other in Merrimack.

Along with NH1 News, Wilson also sent the photo over to UFO Sightings Hotspot. They said the object was most likely a lens flare, pointing out that it looks very similar to one captured on a NASA camera on June 11. It can be seen in the video below around the 31 minute mark.

The UFO Report has the full photo:
http://ufostalker.com/event/84622 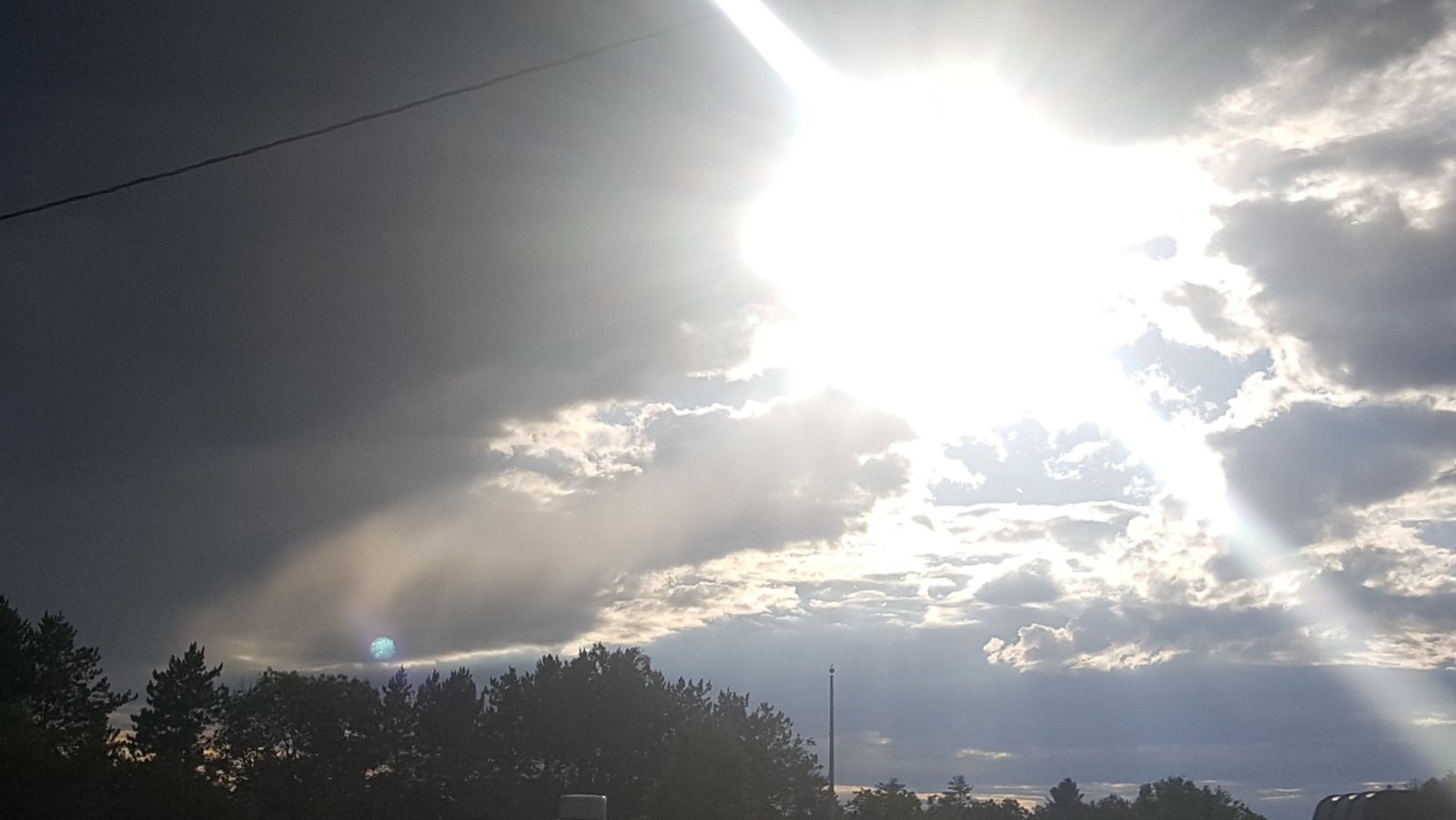 So it's clearly exactly the same thing. It's an internal reflection of the image of the sun on the sensor, with PDAF (autofocus) pixels.
Here's a video timelapse showing the reflection with the dots. The reflection moves with the sun, and is obscured when the sun s obscured.
Source: https://www.youtube.com/watch?v=d5jHtYB3t5I

It's a bit hard to see the dots in still frames, but they are fairly apparent viewed full screen 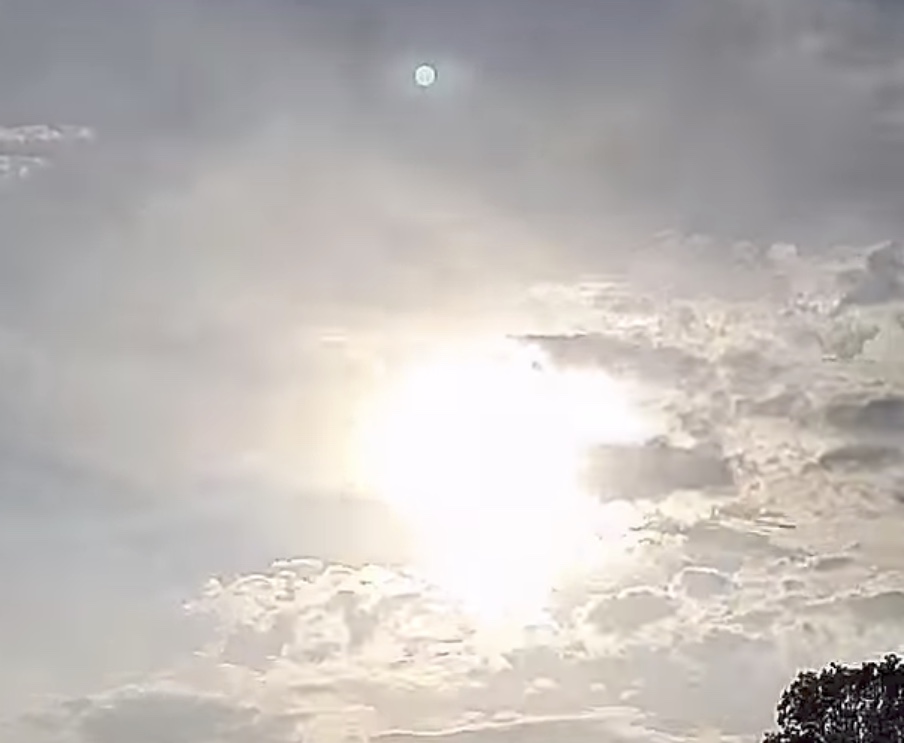 Here's a different type of "orb with dots" I just took. 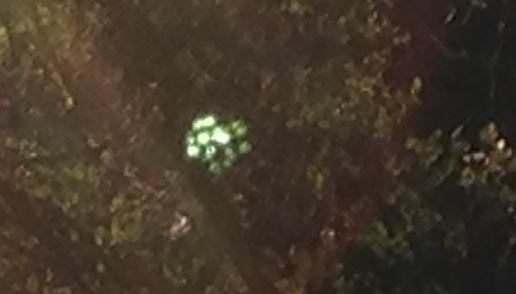 It's an iPhone 5 ghosting image. 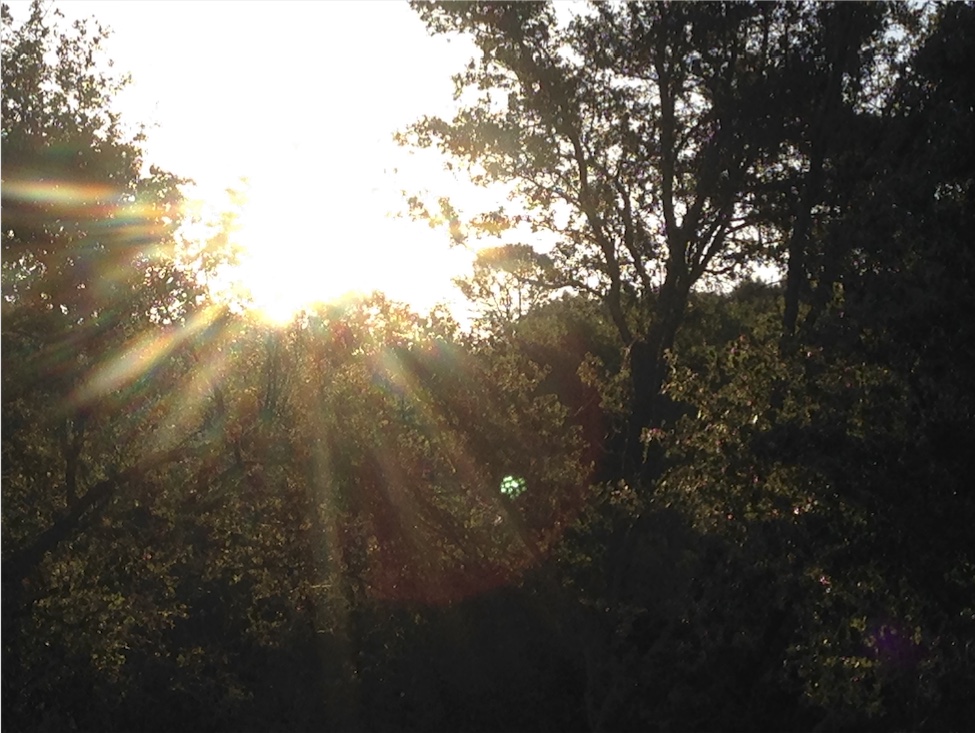 The sun is actually behind the trees, so what we are seeing is an image of the sun with tree branches in front of it.
Here's an iPhone 6 reflection. I suspect this is also a sensor reflection. 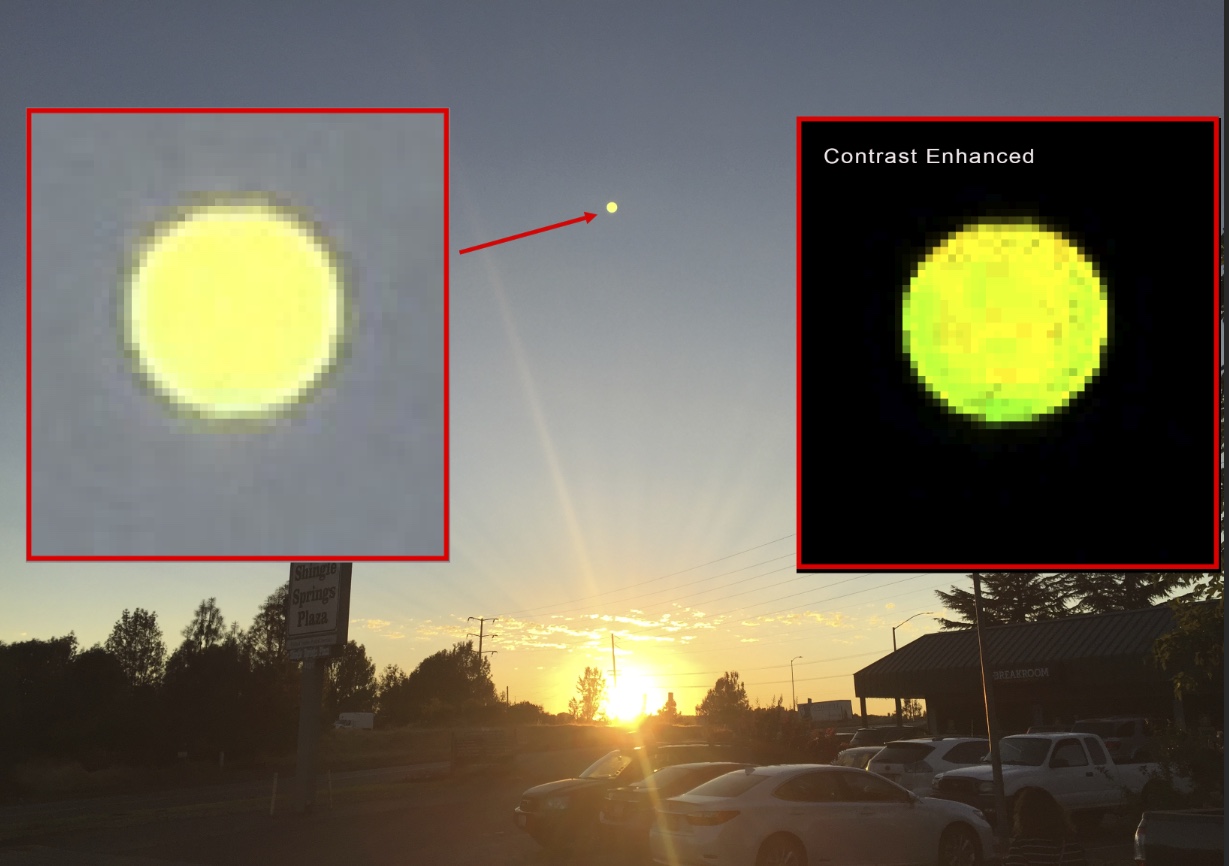 The contrast enhanced version shows some variation, but it's not clear if this is from variations in the sensor reflectivity like the dots on the Galaxy-S6.
You must log in or register to reply here.

How to Verify that the Sun is a Distant Sphere, with Binoculars & Sunspots