I came across this "Long Island Medium" 2013 video (episode clip), where there is an "orb" seen in a recorded video screen of a baby monitor.
Host Theresa Caputo concludes it's unusual but likely a "spirit"....a good spirit, mommy's deceased father over-watching the grandchild.
What do you think it is ? 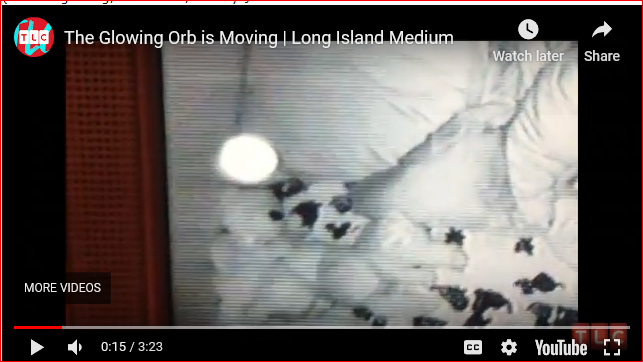 If we disregard hoaxes for now, what could the round light be ?
I have thoughts, but let's see if yours matches mine.
(I don't want to influence anyone's ideas)
~~~~~~~~~~

The baby monitor is this one, I believe....(no longer available} ... 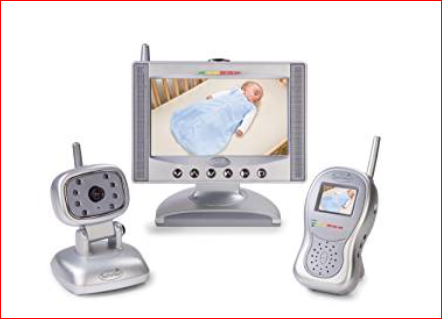 Looks possibly like a tiny 'money' spider on the lens of the camera, bobbing around on its tiny web. I get similar orbs on the reversing camera of my car when its dark and the lens picks up a tiny spider or insect with a bit of lens flare.

Staff member
Also sometimes you get something suspended on a bit of spider silk, just kind of wafting around. Room air currents move it very gently, and eventually, it drifts into a position where it can't be seen.

Because it's a video taken of a baby video monitor, then LIMedium and everybody is viewing a video of that..... (2 or 3 generations when we see it)........
I was thinking 'why are there no video/ monitor "scan lines" of the "orb" when seen in the 2nd generation ? (baby monitor)
>>> It seems there was a simple (unrecognized) reflection in the baby monitor screen, not a mysterious orb in the video.

I've looked-up "(video) focus assist light", but I've never seen it in action.
.
Are there common cameras that will emanate a light (LED) in dark conditions, that will assist in video focus ?

I'm thinking there was a simple light reflected off the baby monitor, and possibly they never noticed it until replaying the handheld video.

I cant seem to find the original video or videos, I tried.

The cameraman taking this has purposely created some Cinéma vérité camera shake.

1. I'm trying to match the camera shake to the movement of the orb. I can't do that.
This suggests that the light source does not originate from the body of the camera; or anywhere else in that room.

2. The orb becomes smaller in diameter toward the end.
This would suggest that the orb is a lens flare; an internal reflection of the camera diaphragm which is automatically stopping down to adjust to increased light. Which would suggest that the light source originates somewhere in the room, or the light source is the screen itself. But number one rules that out. The light levels don't seem to fit that idea either. Nor does it really look like that type of lens flare.

So I have to rule out the idea that the light source is in the cameraman's room, and go with the idea that the orb is something small in front of the baby monitor camera, which at the end is moving away from the lens and so getting smaller in diameter.

That's tricky though, because the Cinéma vérité movement is hard to track. If anyone can correlate the camera movements to the movements of the orb that will change things.

So there must be an IR lamp on or near the camera illuminating the room... Thus the dust mote or bit of lint, or whatever, is close to the IR light and brightly illuminated by the lamp. And the lint is very out of focus.
Last edited: Aug 26, 2019

This one, in particular, is very similar
Source: https://www.youtube.com/watch?v=w3-cyVTdFBI


This one is fast-moving, probably a bug:
Source: https://www.youtube.com/watch?v=Eh_Zw8NROtw


This one seems to be an actual light. By the way it moved it's either handheld, or something like the reflection of a street light of a mobile.
Source: https://www.youtube.com/watch?v=HFmXqMKcybE

The orb is probably the least interesting thing about the video. It seems relatively common and is clearly a camera, lighting, dust mote or one of the other numerous image/video artifacts debunked and explained many times here. I leave that to others.

More interesting is the medium. She is good, not the best by a long chalk, but good. It could almost be used as a training film for debunking mediums.

Some good cold reading: "I'm sensing a father figure here" (yes indeed, given there is a new born baby). Soon the dead grandfather is confirmed by the mother and thereafter regarded as fact established by the medium.

A bit of shotgunning. Some Barnum questions.

Some open questions. The responses then narrowed down to certainties. Do the toys sometimes look as if they have been moved around? Errh Yes. Tick (Hardly news to any parent).

All information provided by the mother and then extended by the medium. So maybe a bit of warm reading as well based on prior conversations to starting the film (like the other child).

Correct....the Long Island Medium (LIM) would certainly grasp at "warm readings" even more readily than "cold readings".
There would be little chance she would "debunk" the mysterious light(s), because then there would be no need for her show..... no plot, no intrigue, no entertainment, no viewership.