Some advice by experts, not limited to QAnon. Article by Charlie Warzel.
Largely follows the line of EFTRH which is good to notice.

Increasingly, friends, colleagues and readers share the same story with me: Online, somebody they know and love has stumbled into the treacherous world of online conspiracy theories and, in some cases, might not even know it. I’m often asked: How do you talk to people you care about who might be on the precipice of or headed down the conspiratorial rabbit hole?

It’s a question without an easy answer, but one we need to ask with increasing urgency. I decided to ask some scholars and researchers about best practices.

it's behind a paywall.

deirdre said:
it's behind a paywall.
Click to expand...

I think NYT has a limit to how many free articles you can read per week, so for most people, it will be accessible. You can always clear your cookies, or use an incognito/private window.

Perhaps on a related subject, a short BBC interview with the young son of a popular conspiracy theory promoter in the UK, Kate Shemirani:

He says he feels they will never have a relationship again as "she's too far gone".

JFDee said:
Some advice by experts, not limited to QAnon. Article by Charlie Warzel.
Largely follows the line of EFTRH which is good to notice.
Click to expand...

Yes, not that I invented it, but it's great to see it's roughly the same thing as common advice from multiple people.


Everyone I’ve talked to starts with the same advice: Don’t be a scold. Be gentle, compassionate and patient.

“I always tell people that if they’re going to talk to somebody who has gone down this road, they shouldn’t argue with them about it and they should try not to get heated trying to debunk information,” Mike Rothschild, a conspiracy theory researcher who is working on a book on the QAnon movement, told me in August.

Mr. Dickey echoed Mr. Rothschild. “The first lesson that I learned the hard way is not to dismiss them outright,” he said. “People adopt conspiratorial thinking because it aligns with a core facet of their identity.” Mr. Dickey told me that in his early conversations with friends who had fallen for fringe theories, he was overly aggressive. “Because I went right at these core parts of their identities they felt like I was attacking them personally. So I had to find a way to make it seem not like a personal attack.”

Travis View suggested approaching conspiracy theorists “with the same pity and compassion you might show someone who chooses to stay in a destructive relationship.” He argued that those who’ve found community and purpose in these movements “really don’t see that they’re going down the wrong path because they don’t understand that there are better options.”

There's a video halfway down the page, where they mention my work. Copying and pasting the video gives the transcript. 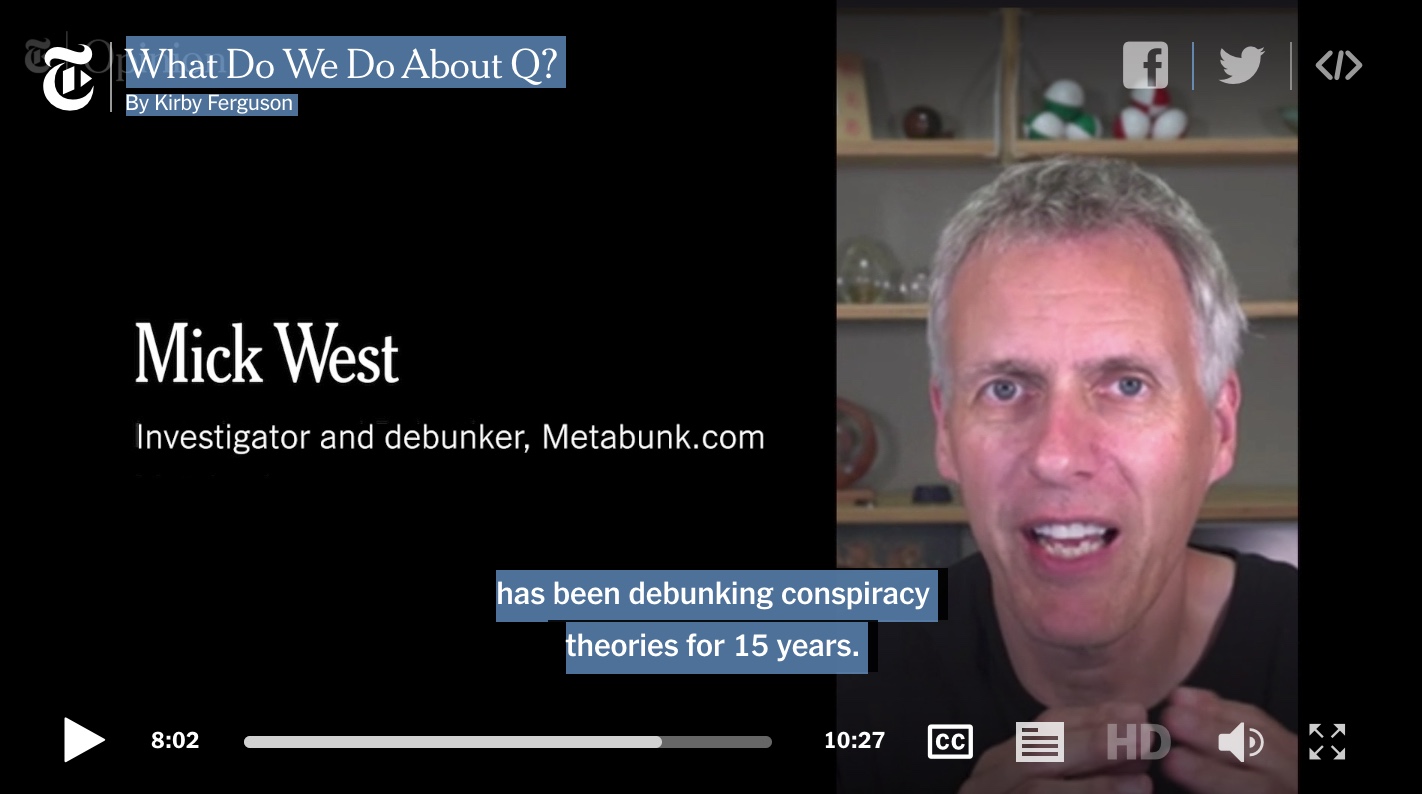 
The conspiracy theories seem ridiculous, but the consequences are real.​

[...]
What society as a whole does about QAnon is a complex question that has no definite answer. But what we as individuals do about Q in our personal lives is relatively simple. We don’t panic, and we don’t lash out. We calm down and we slow down. Here are three things to do if someone you know gets into QAnon. These are based on the work of Mick West, who has been debunking conspiracy theories for 15 years. Stay connected. For almost everyone, it’s not necessary to cut off a Q believer. If you do this, that’s one less lifeline back to reality they have access to. That’s one less voice that isn’t simply cheering them on. Share information they may be lacking. When you see someone posting incorrect information, share links that show why it’s incorrect and simply ask questions about how these conspiratorial claims would work. Often, when people delve a bit deeper, they can see for themselves when something is implausible. And finally, be patient. These beliefs are unlikely to suddenly vanish. It will seem like nothing is working when slow progress is actually being made. If you intervene, you need to be gentle. Be kind or be neutral. And if you can’t do either, do nothing, because your attacks can make things worse. Believers in QAnon will benefit more from our interest and our respect than from our condemnation. “Calling it stupid, calling the people who are involved in it stupid— and I’ve never known a good way to get people to do anything for me by calling them stupid.” Instead of looking at QAnon followers as a force to be defeated, look at them as fellow flawed humans you can positively influence. This isn’t some contest you need to win. Anons are just people like us. They’re not mentally ill. They’re not beyond redemption. [...]. In the meantime, we need to endure and not chase people deeper down the rabbit hole.

Ah, I had got the feeling that the author is familiar with your work but I missed that reference.
You must log in or register to reply here.