Staff member
I saw this contrail heading towards me and thought it would pass overhead, giving me a clear shot of the plane. 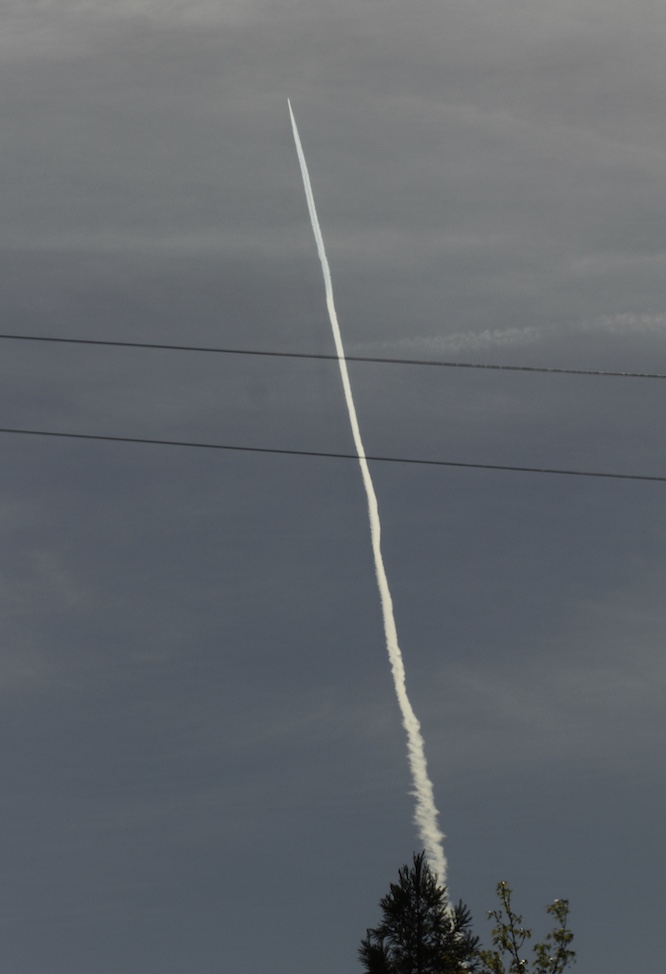 Instead it began a turn to the north (the plane's left) 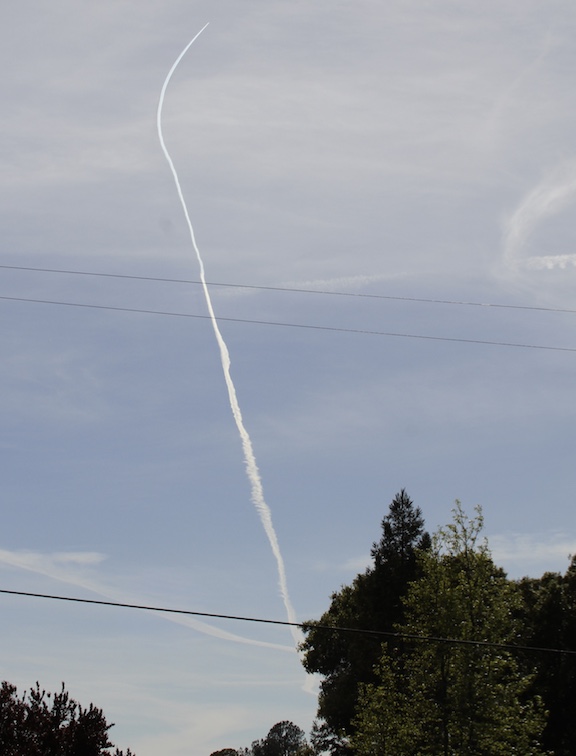 Quite a dramatic one, from where I was standing. 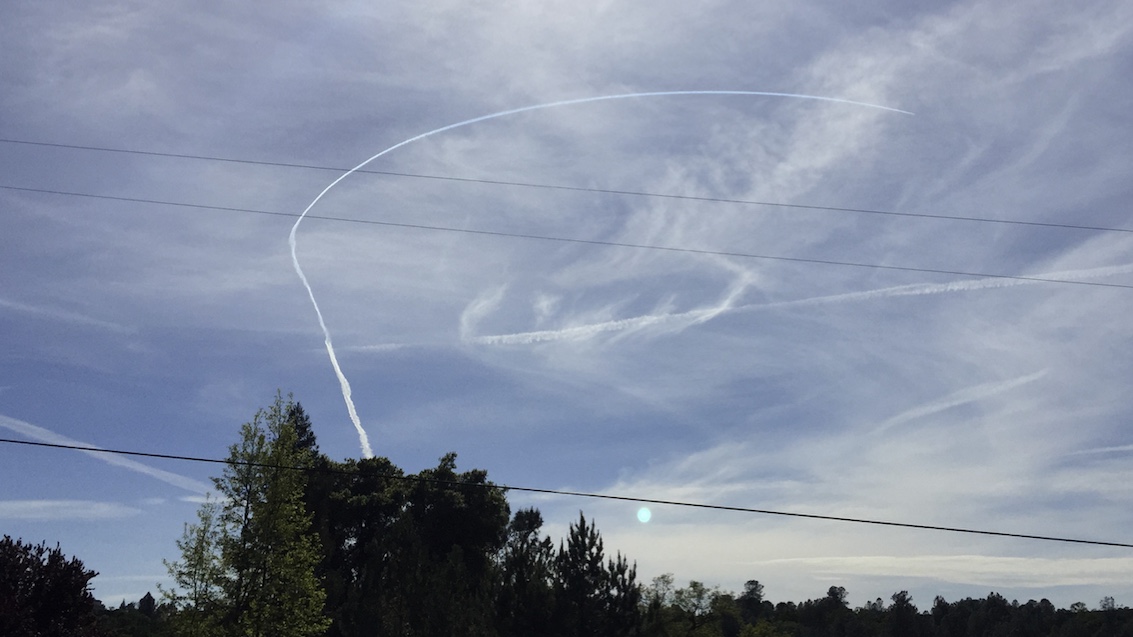 Turns out it was this: 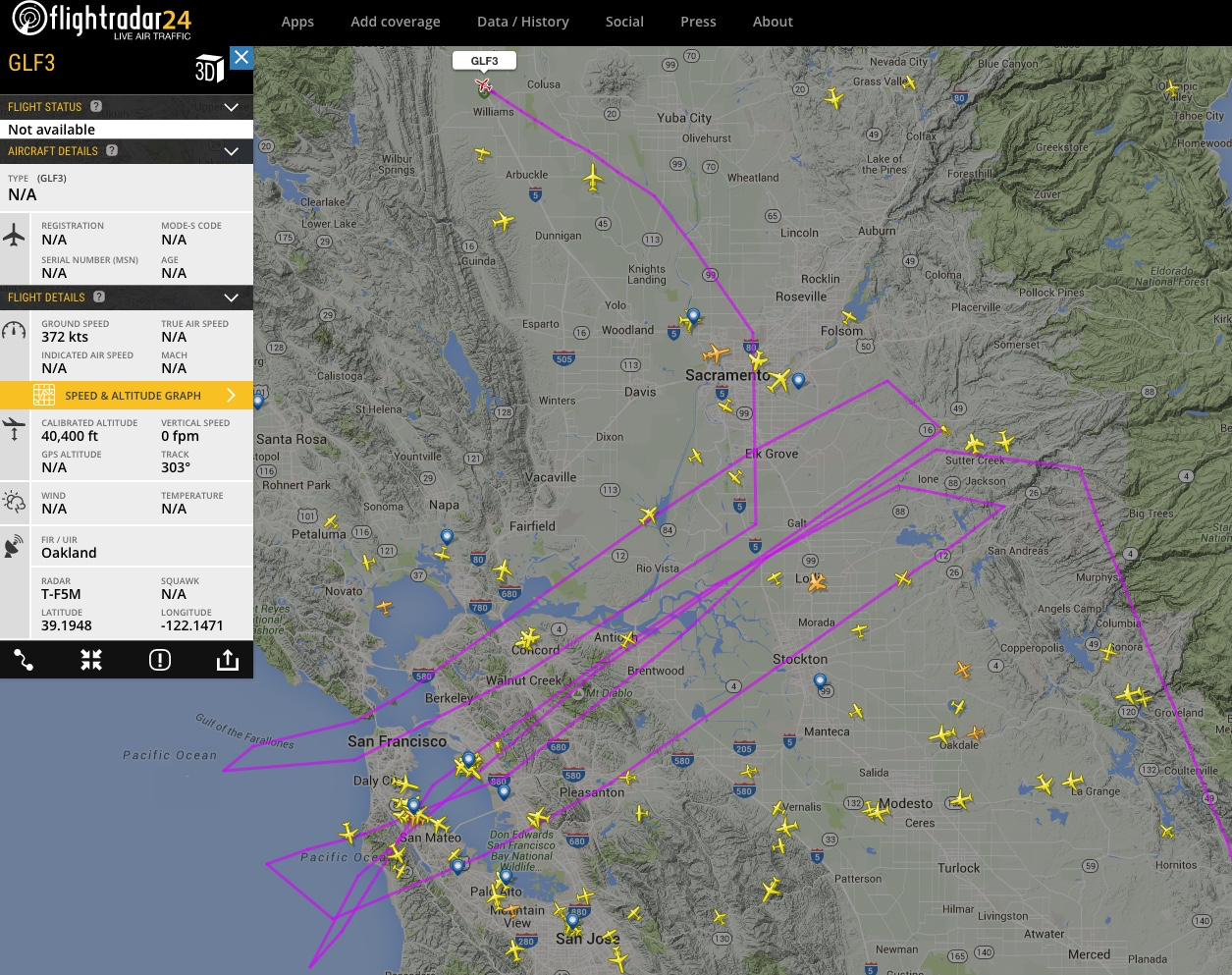 It's an earthquake fault mapping flight. 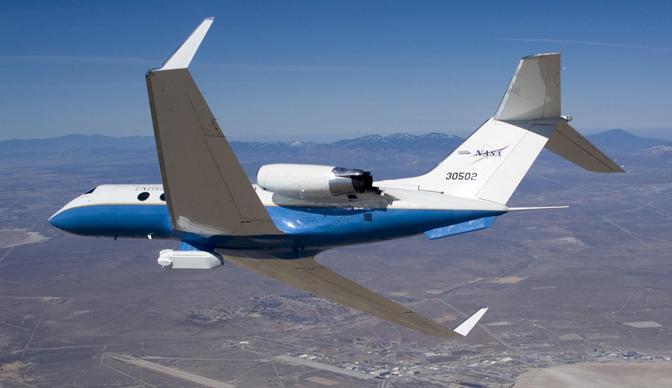 NASA's Armstrong Flight Research Center operates a C-20A, a military version of the Gulfstream III business jet, as an environmental science research aircraft for a variety of geophysical research missions. The aircraft has been extensively modified and instrumented for the role, including installation of a sophisticated synthetic aperture radar in an underbelly pod, a self-contained on-board Data Collection and Processing System (DCAPS) and a precision autopilot that enables the aircraft to fly repeat passes over a target within 15 feet of the original flight path.

The Unmanned Air Vehicle Synthetic Aperture Radar (UAVSAR) is sophisticated synthetic aperture radar system developed by NASA's Jet Propulsion Laboratory in Pasadena, CA. Developed initially for carriage by remotely operated unmanned aircraft, the UAVSAR is mounted on the C-20A in a specially designed pod that will be interoperable with unmanned aircraft in the future.

Since the UAVSAR was installed in 2007, the aircraft has flown more than 2,000 data-collection flight lines, most from an altitude of 41,000 feet


Interestingly I could see the turns in the path that was over San Francisco. 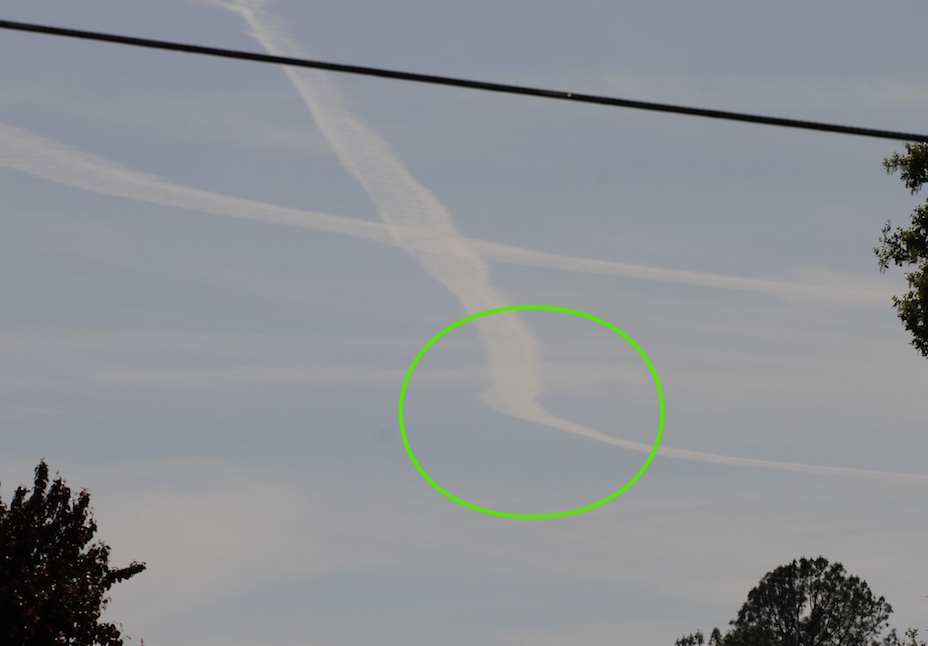 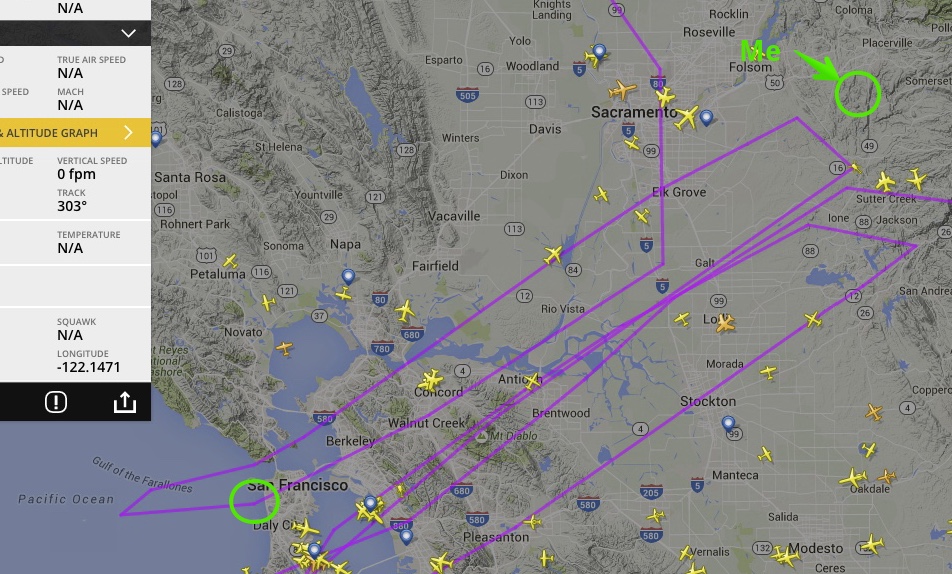 NASA502 showed up before, with a very similar flight path:
https://www.metabunk.org/u-turn-contrail-near-san-francisco-nasa502-glf3-survey-plane.t3654/ 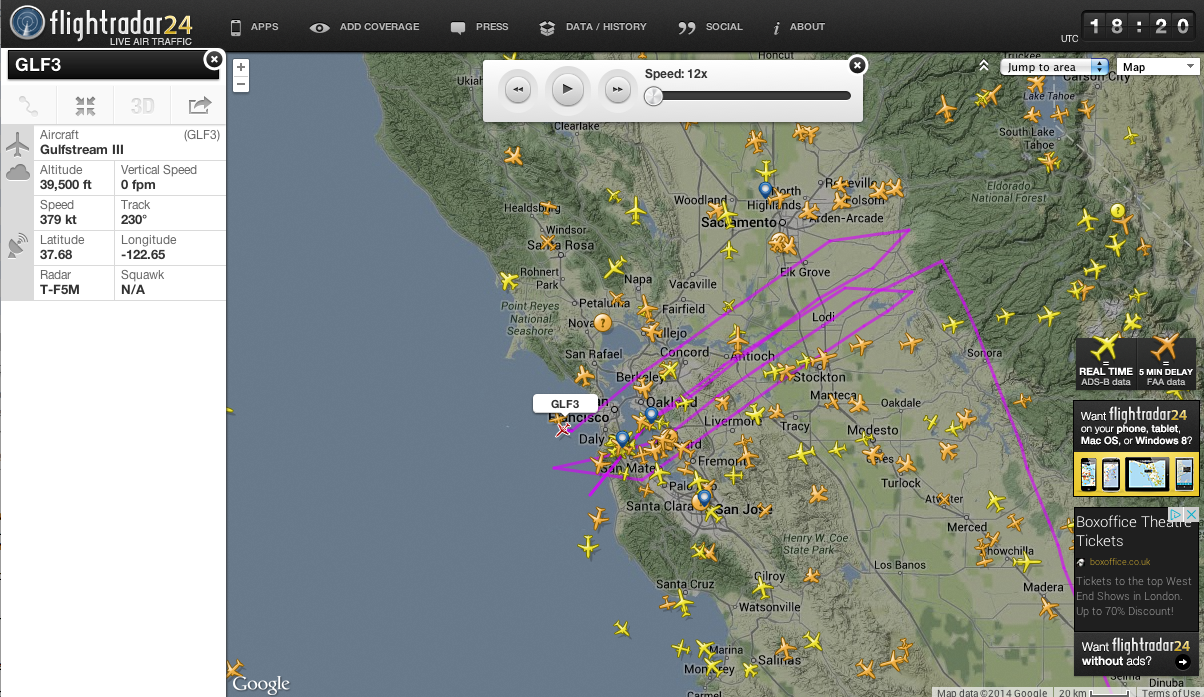 Its still in the air, and I expect a lot of photos of curved contrails to be posted today by "chemtrail" enthusiasts. There's already a few on Facebook: 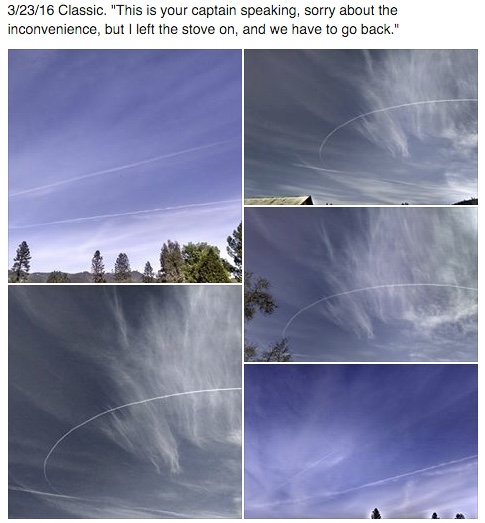 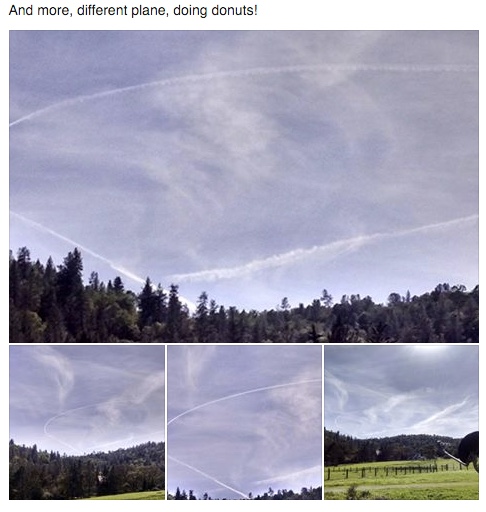 It seems to me, that circular or zigzag snake overhead flights are uncommon, but certainly expected "at some point" for research and testing.
When it happens, no alarm bell should ring.
Though, investigation of it when it does happen, is often interesting.

If it was a contrail-less day, the aircraft may have not been spotted at all.
........which is to suggest that these flight patterns happen even more frequently, with or without a contrail.
Last edited: Mar 23, 2016

I haven't had a chance to get on line until now. I'm so glad the mystery has been solved! I noticed a really distinct contrail passing overhead near my house this afternoon around 3:35pm and as I unsuccessfully tried to locate it on FlightRadar24 (probably 'cause I didn't look far enough south or west), it made a big U-turn. I got a picture and will add it to this reply when I get a chance.

Here's the u-turn over Marin county: 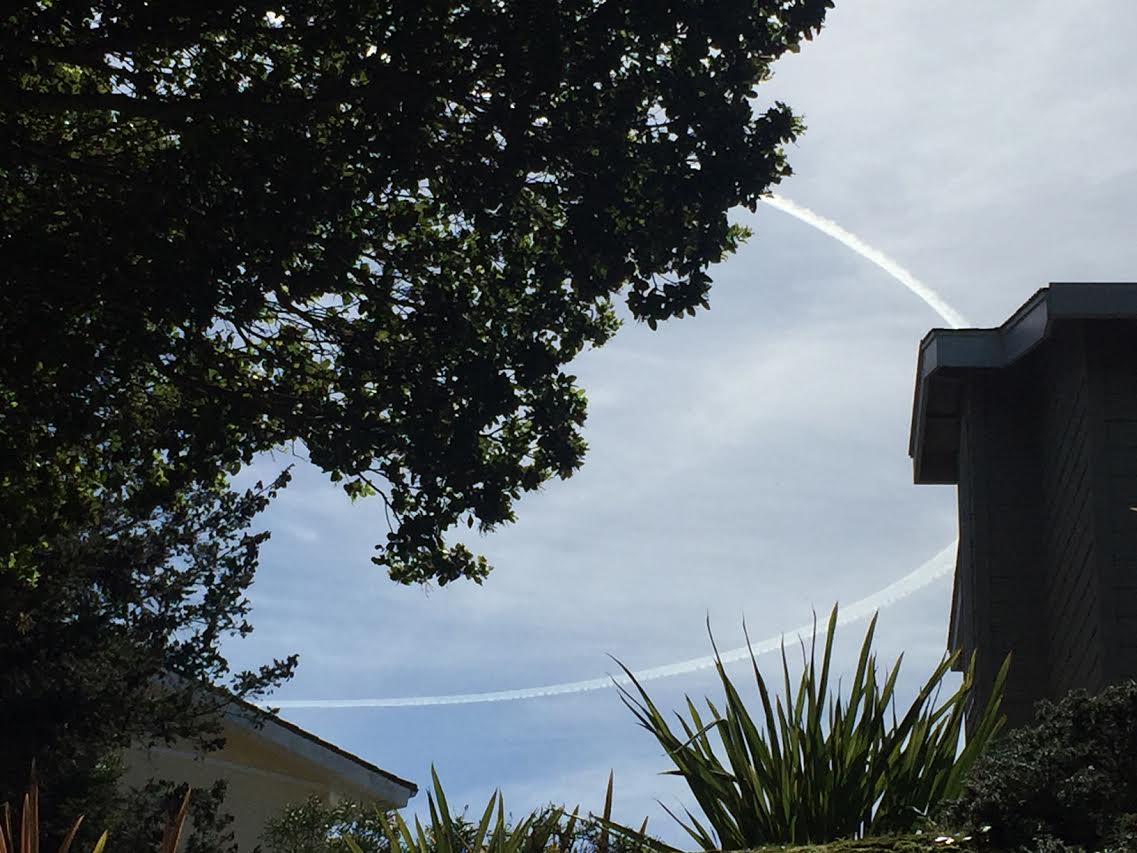 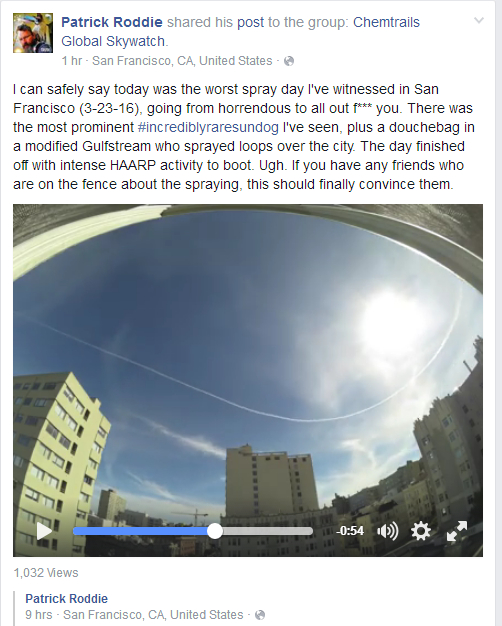 The panoramic webcams captured the second of the two U-turns southwest of Lake Tahoe around 3:20 PM = 22:20 UTC. 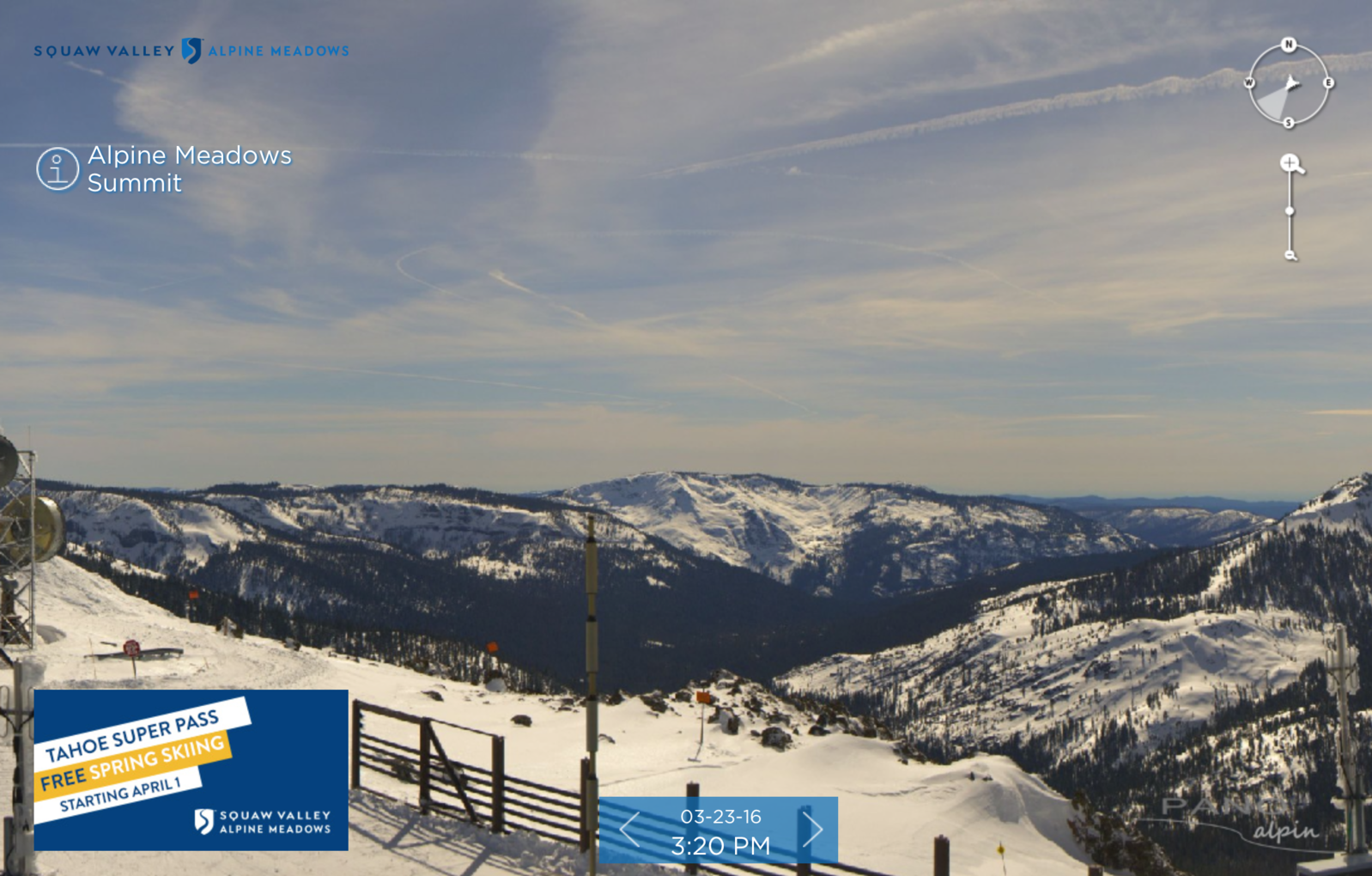 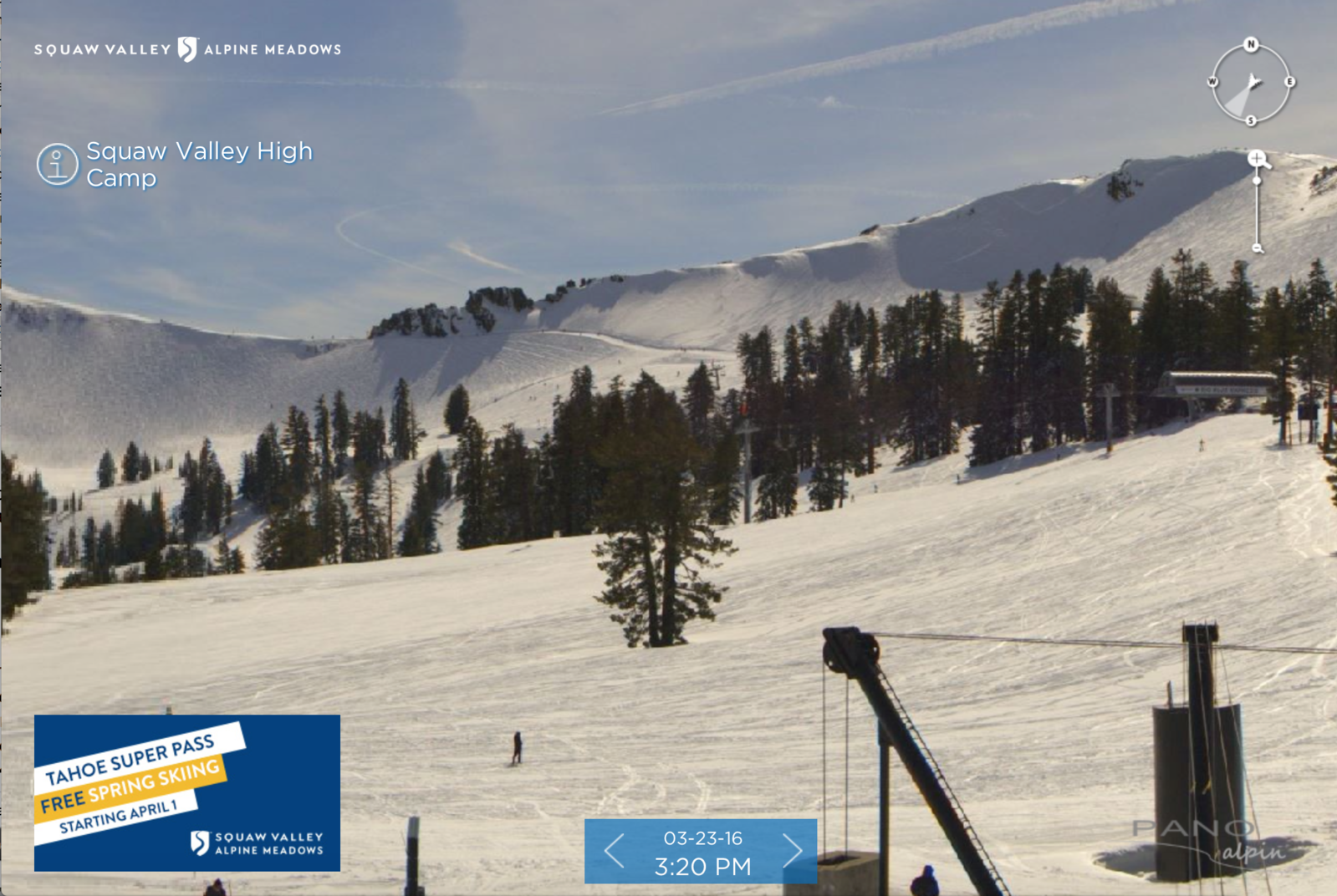 The contrail from the first U-turn, which happened just after 2:40 PM, probably was too short lived to be captured by the next shot at 2:50 PM

Marin B said:
Here's the u-turn over Marin county
Click to expand...

Flew right over me and i missed it...guess I am just a blind sheep who doesnt "look up"

I think it's interesting that Roddie has correctly identified the aircraft. He clearly knows what it was there for, but chooses not to give its 'cover story'. 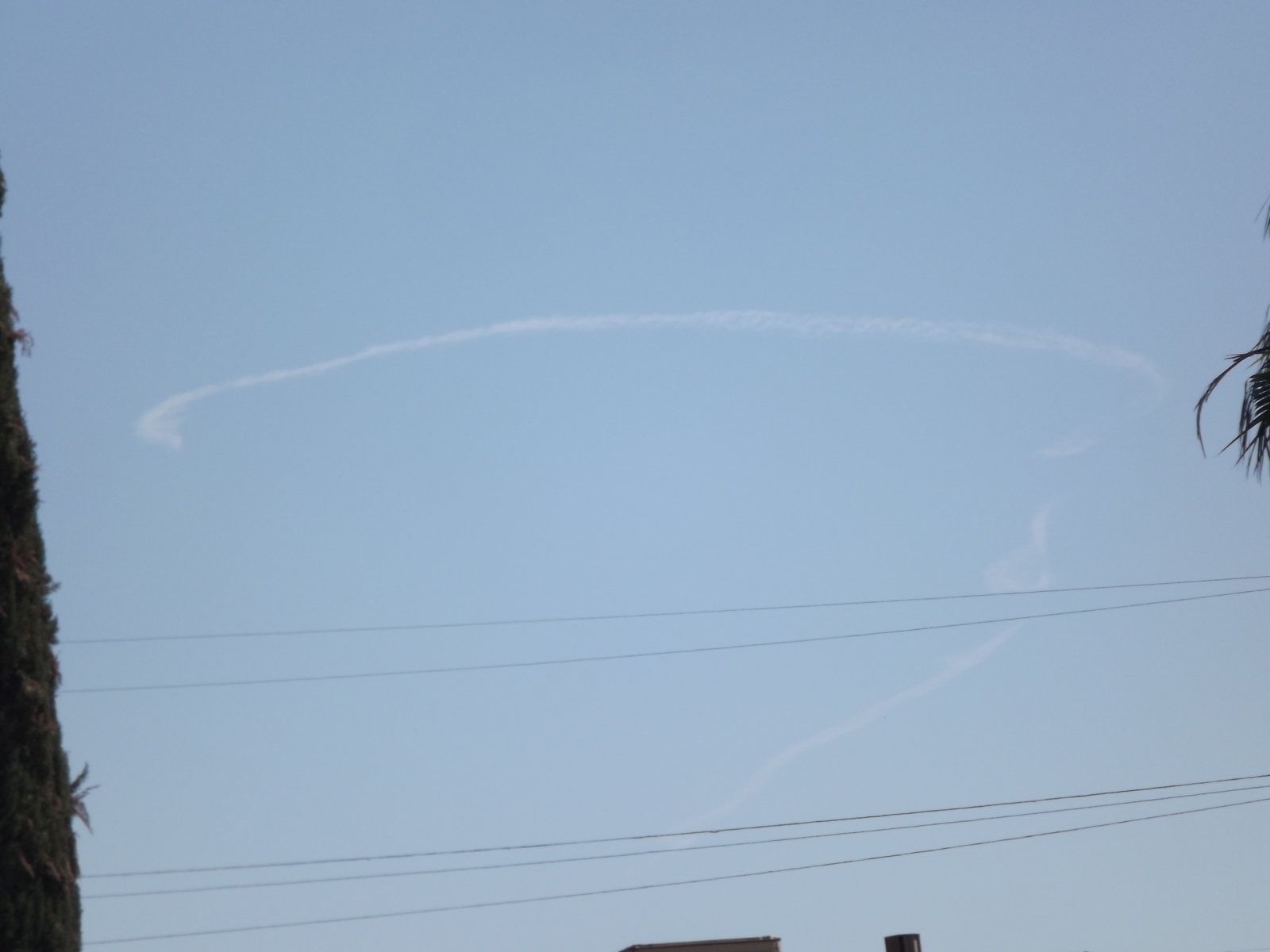 The GE 747 testbed is flying, but the track is a little south of this, and a little low for contrail formation. 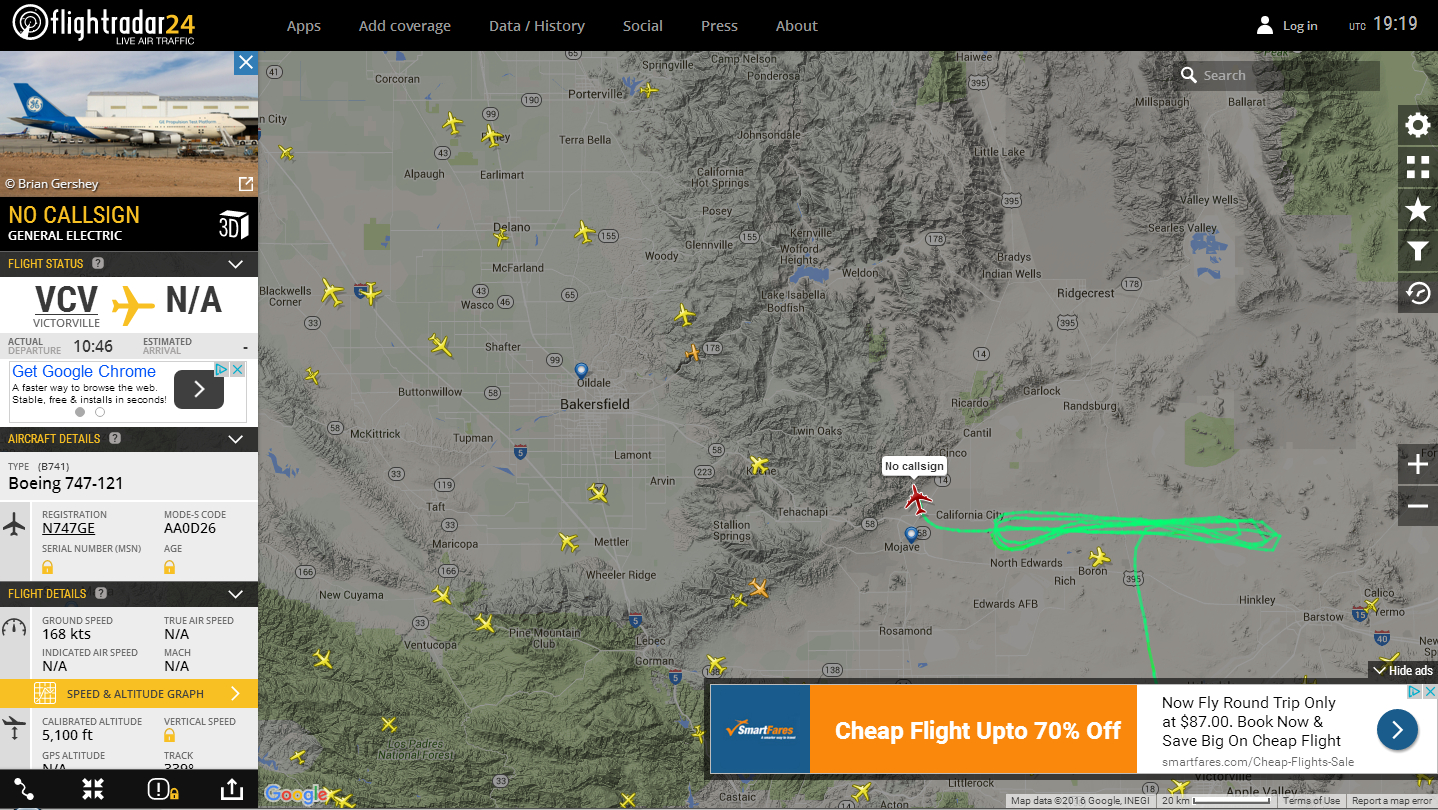 So, there may be another plane doing some circling that isn't being picked up by flight radar.

I think I saw it again today in Marin county about 12:10pm...I was with my parents visiting from out of town and I pointed it out...my mom wondered why it turned around- I suggested that it was likely an earthquake fault mapping plane from NASA- she was slightly incredulous that I would know that...and then I had to explain why I knew that..and it got all involved...I probably just should've just kept my mouth shut

Trailspotter said:
The panoramic webcams captured the second of the two U-turns southwest of Lake Tahoe around 3:20 PM = 22:20 UTC.

I got this shot of the curvacious contrail at 3:22, posted it in another thread. I was at the junction of Secret Ravine Parkway and Sierra College Boulevard in Roseville (or Rocklin, the Sac suburbs are crammed together so confusingly) looking due East. It's on the right side: 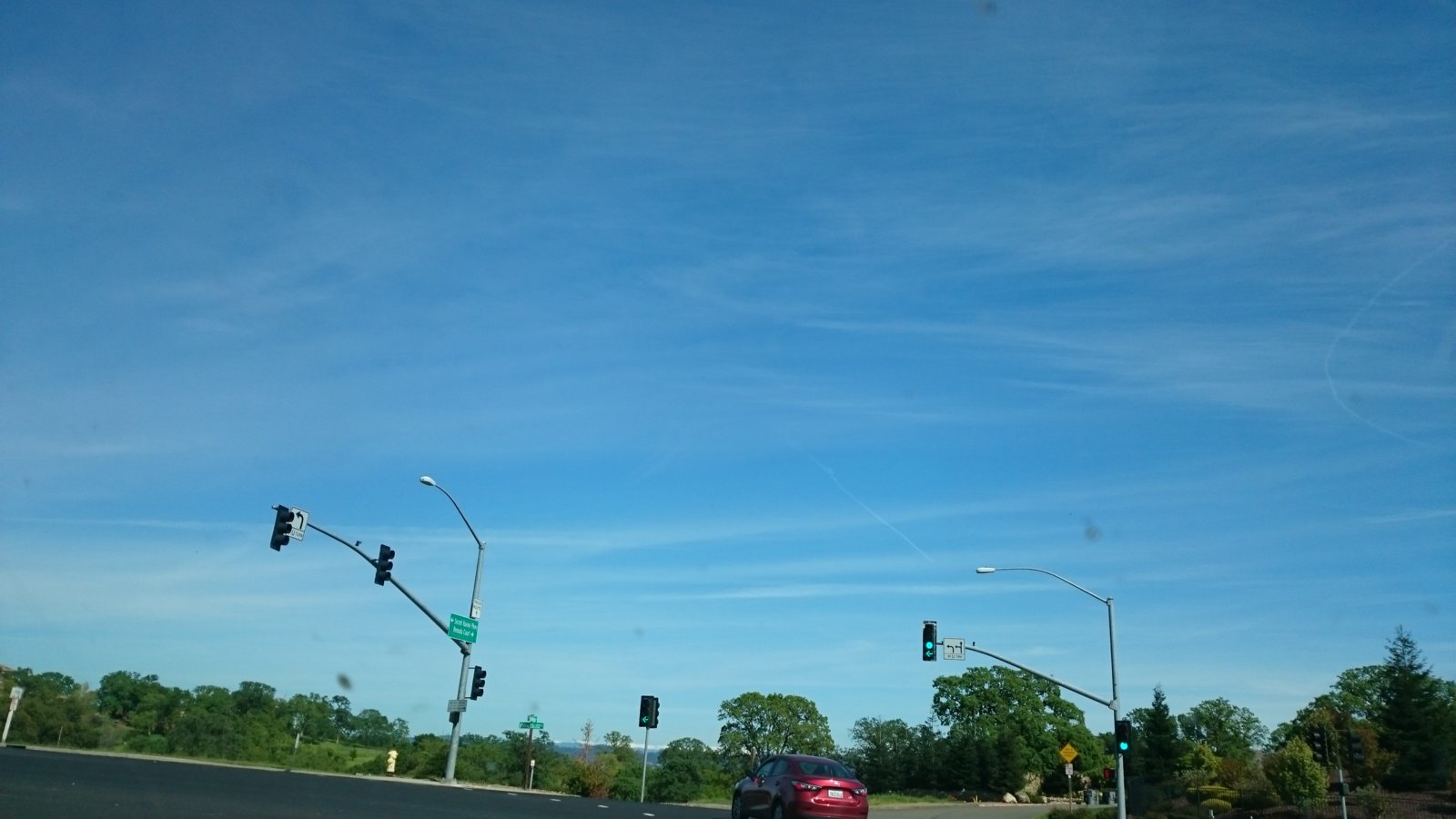 My location at the time is represented by the blue dot in the lower left corner:

I think the angles line up, but Idunno.
So I guess my mystery contrail has been identified? Flightradar's playback is down for me at the moment, so I can't check.

tinkertailor said:
So I guess my mystery contrail has been identified? Flightradar's playback is down for me at the moment, so I can't check.
Click to expand...

Yes, it has. I've modelled the 3:20 U-turn contrail in Google Earth: 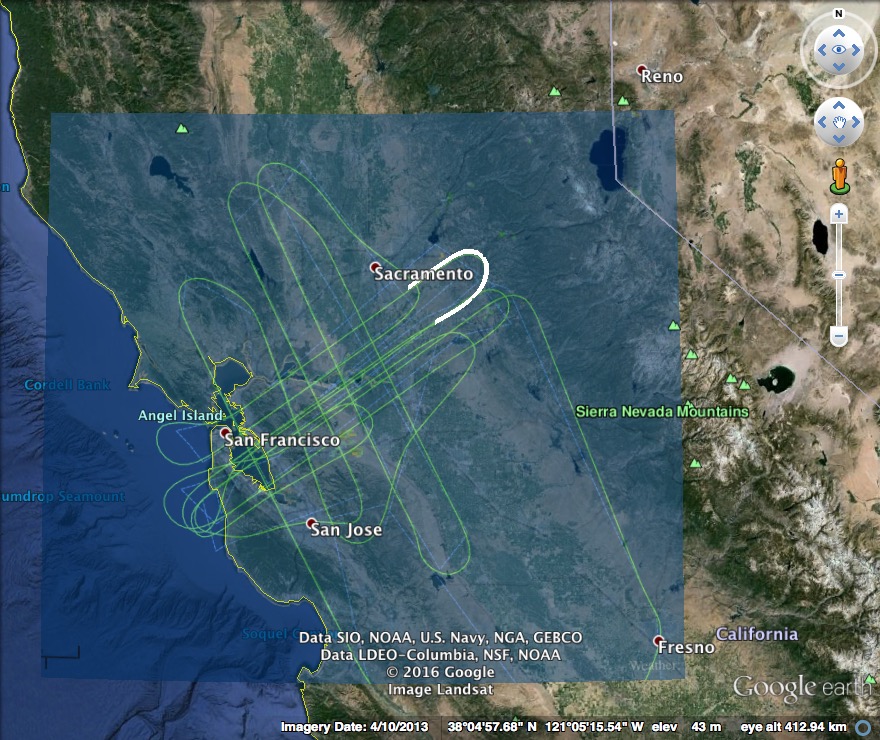 and look at it from your location: 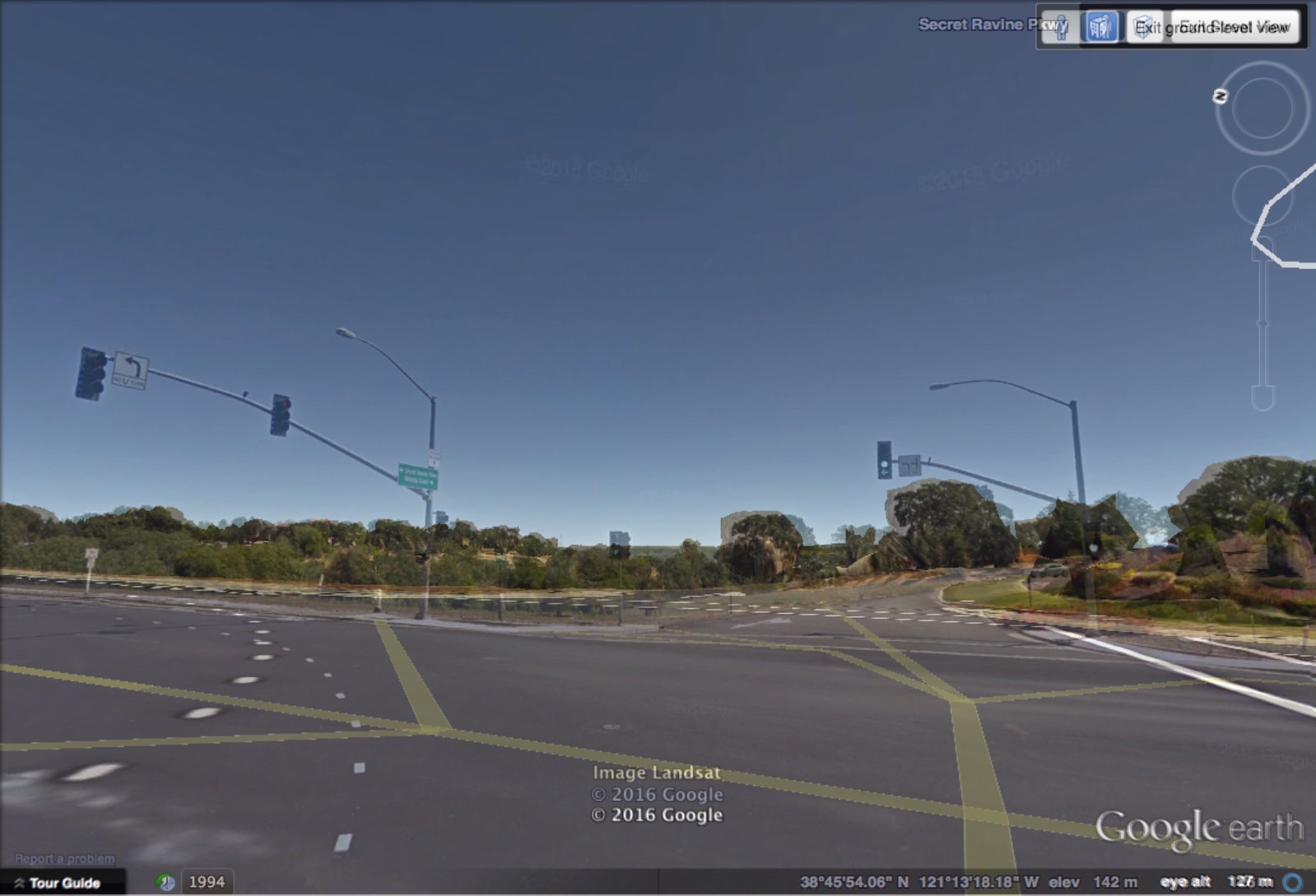 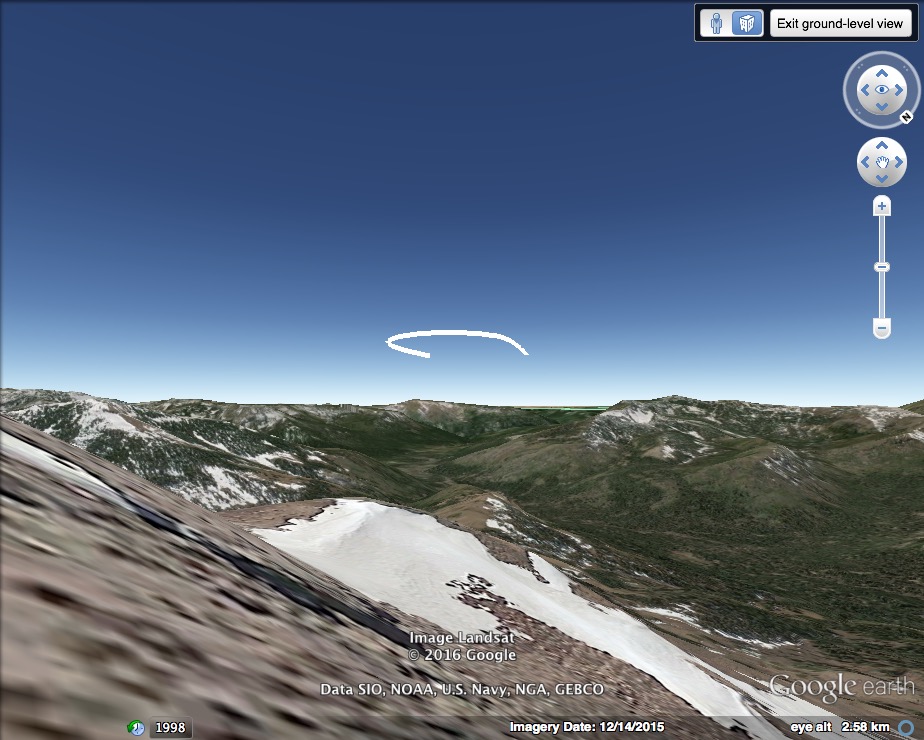 Whoah! pretty amazing. I decided to quit taking so many contrail photos, figuring I'd just take the more interesting ones. I had begun to take my Canon camera out there with a UV filter, which is supposed to make the trails (clouds) stand out better from the sky but went back to my old camera and thus the poor pictures that I got.
Last edited by a moderator: Oct 20, 2016

steve holmes said:
Whoah! pretty amazing. I decided to quit taking so many contrail photos, figuring I'd just take the more interesting ones. I had begun to take my Canon camera out there with a UV filter, which is supposed to make the trails (clouds) stand out better from the sky but went back to my old camera and thus the poor pictures that I got.
Click to expand...

welcome, post em up when you see interesting ones

https://www.metabunk.org/photos-of-planes-and-contrails-that-you-took-yourself.t1487/
You must log in or register to reply here.