Spectacular multiple parallel contrails were seen over Canberra in the morning of Friday , November 21, 2014


The Sydney-Melbourne air route is reportedly the fifth busiest in the world, and it certainly looked like heavy traffic passing over us this morning. 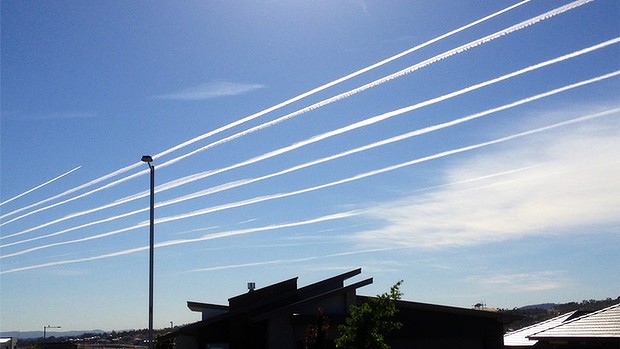 
A cover photo of these contrails on the ABC News FB page prompted a flurry of angry comments from local chemtrail proponents. 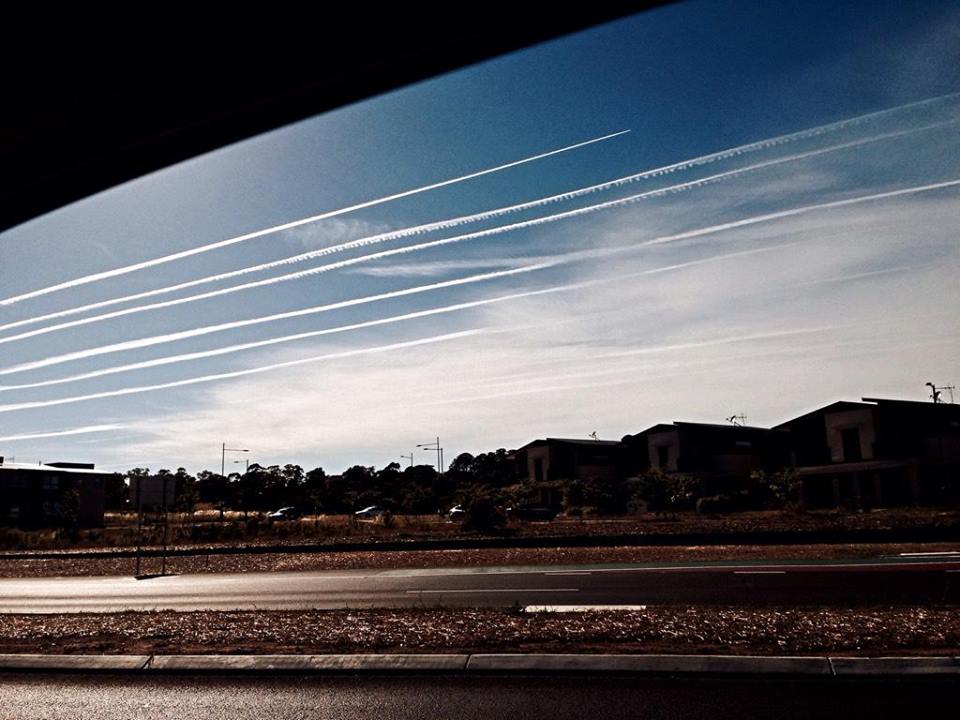 The photos apparently were taken at different times between 8 AM and 10 AM of local time (21:00-23:00 UTC of the previous day November 20). FR24 playback shows that air traffic on Sydney-Melbourne route is arranged into two single files, with flights from Melbourne passing northwest of the Australian capital and flights from Sydney passing southeast of it. 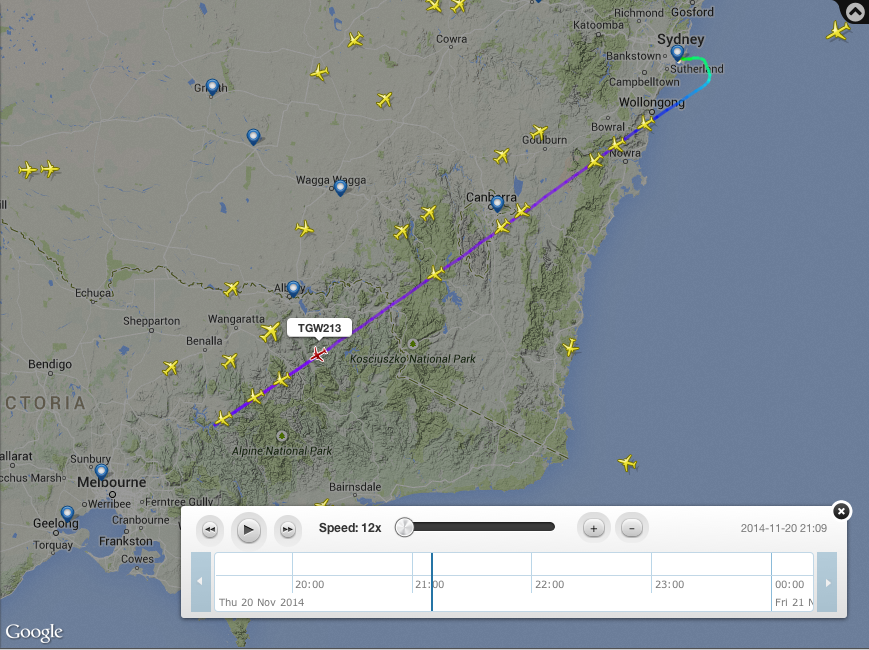 The morning local traffic to Melbourne is joined by the transcontinental flights from Los Angeles. 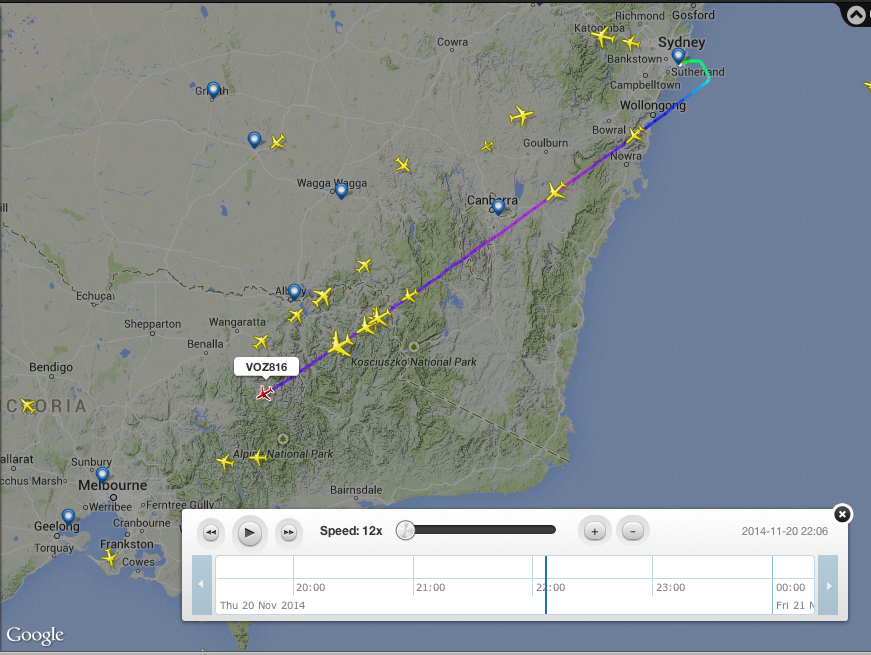 The photos are taken in the eastern direction toward the morning sun and the Sydney to Melbourne file. A random flight track from this file displayed on Google Earth matches the direction of the trails in the photos, including the trails from the past accidentally captured by a Google StreetView car. 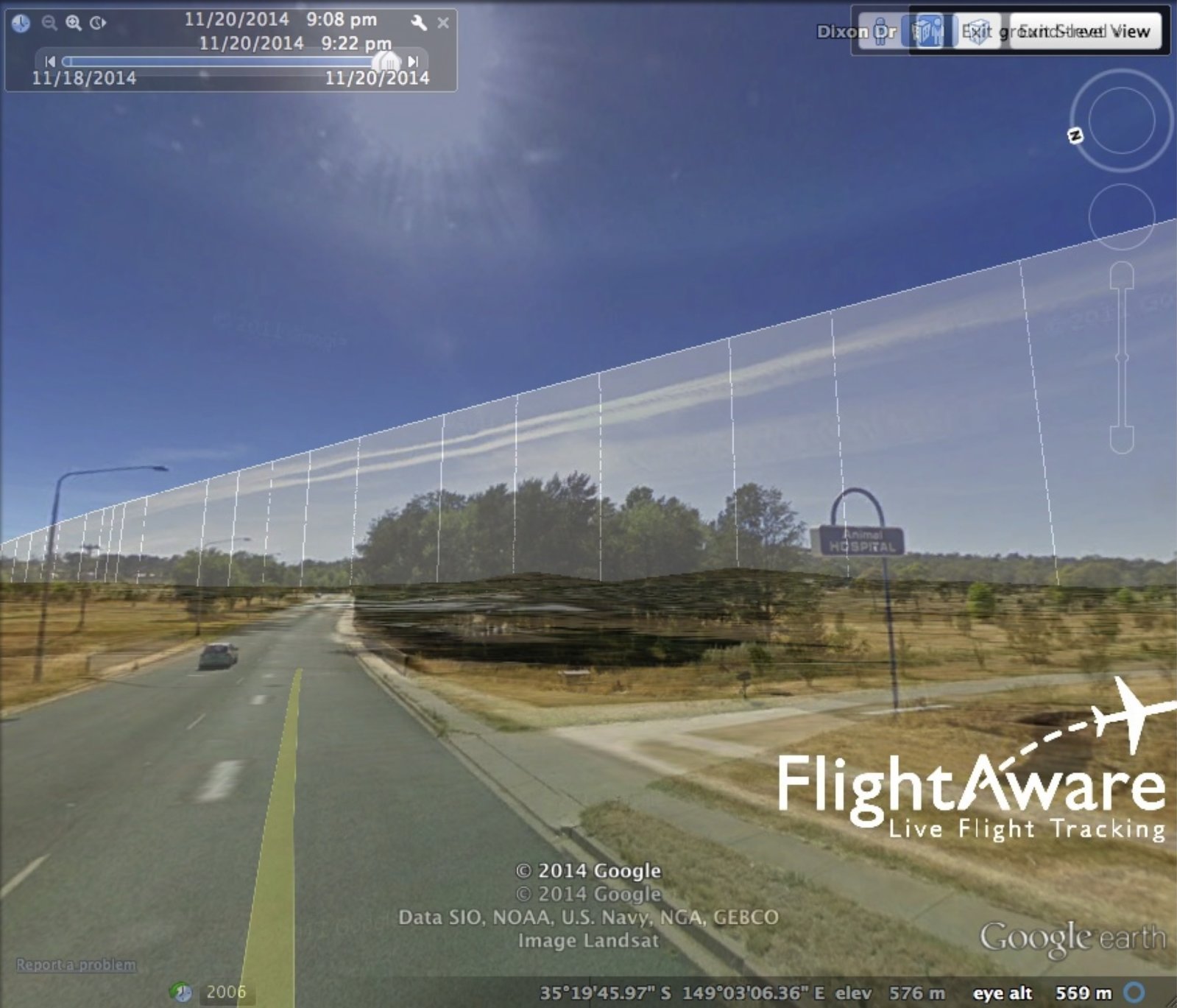 Comparison of the EOSDIS Worldview Terra and Aqua images of the southeastern Australia on the date shows differences in the cloud coverage consistent with westerly wind blowing across the common flight path. The presence of crosswind explains the formation of multiple parallel contrails by the planes following the same track. The shorter interval between the planes, the closer their contrails to each other.

A new flickr photo of known time and location allowed the identification of the flight for the nascent top contrail as VOZ814. Several other flights ahead of it have also been allocated to their respective contrails (red numbers). The time intervals (in minutes) between these flights passing Canberra are shown in orange between their contrails. 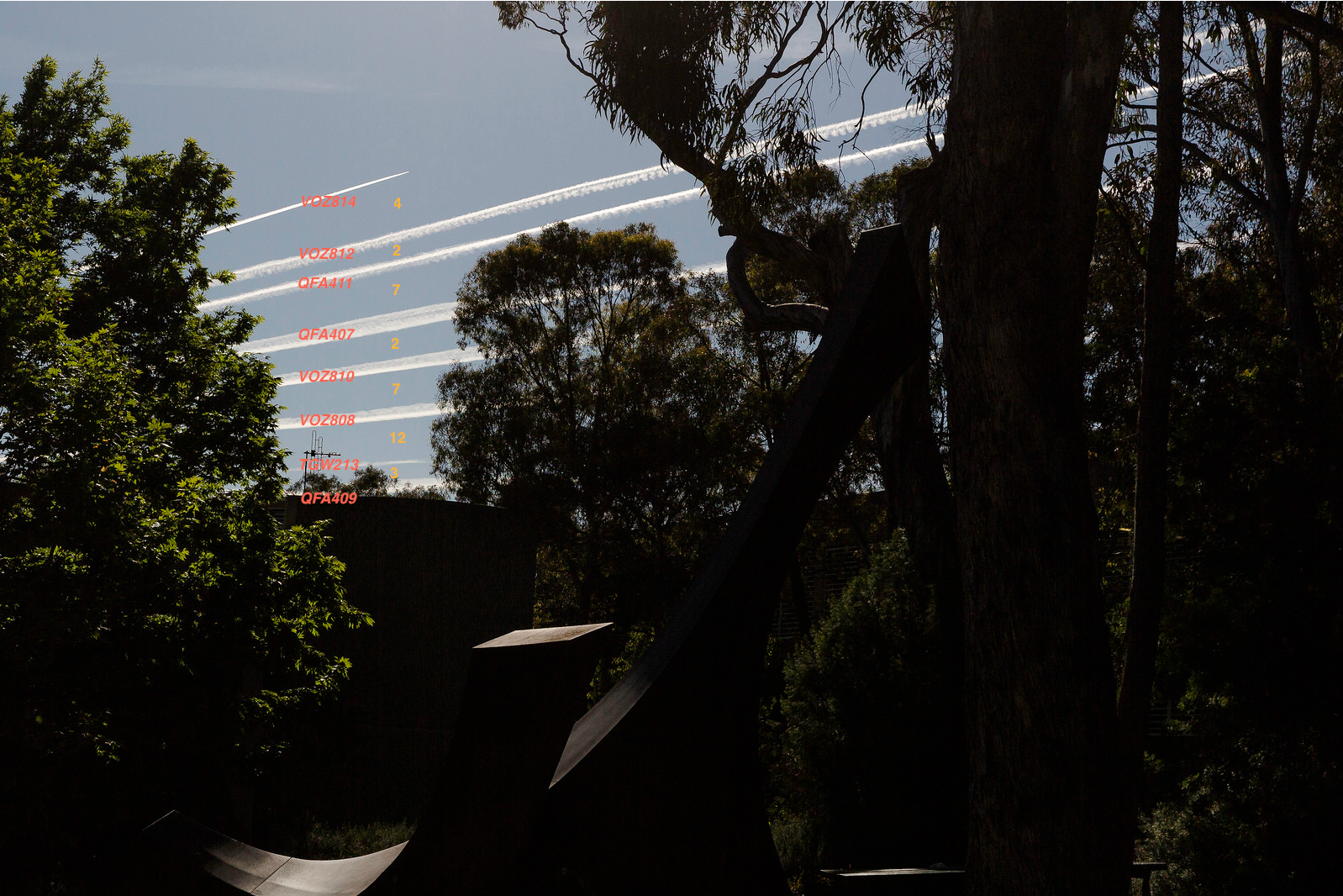 Wow. Same old hysterical bunk, and Russ Tanner still claiming that HBTF engines don't make contrails. People saying the same nonsense things, like "Contrails are water vapor which freezes and then quickly melts away" and "It's really easy to figure out! You open.flight aware or flight tracker and can see that these lines are not from a commercial airliner."

I saw these at around 8.00am from my place. Straight away I knew it would excite the usual suspects.

PECATCH (Pilots explain Contrails and the Chemtrail Hoax) covered it with references.

Hama Neggs said:
Wow. Same old hysterical bunk, and Russ Tanner still claiming that HBTF engines don't make contrails. People saying the same nonsense things, like "Contrails are water vapor which freezes and then quickly melts away" and "It's really easy to figure out! You open.flight aware or flight tracker and can see that these lines are not from a commercial airliner."

They just don't seem to utilize the same logic as I do.
Click to expand...

I have noticed on many occasions that a contrail-related publication in the online outlet of mass media usually attracts many 'chemtrail' comments, but in this case there is evidence of the organised flash-mobing the ABC News site: 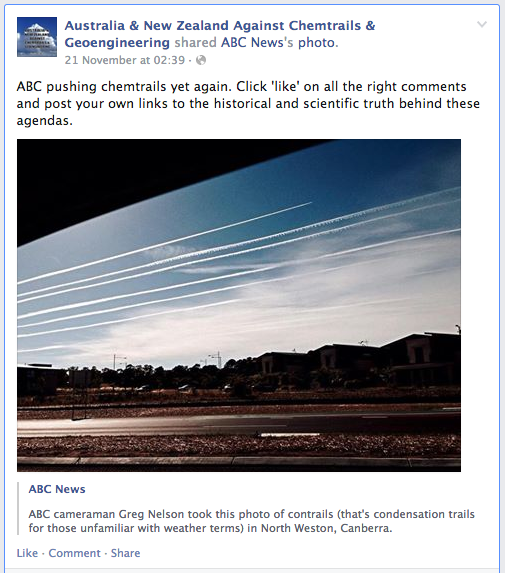 There is another photo of these contrails on flickr:
https://www.flickr.com/photos/will_e_clickit/15233803964

It has been taken at the Bruce campus of Canberra Institute of Technology at 08:22 AEDT (21:22 UTC of the previous day, November 20). In combination with FlightAware data, it allows the identification of the nascent top contrail as from flight VOZ814: 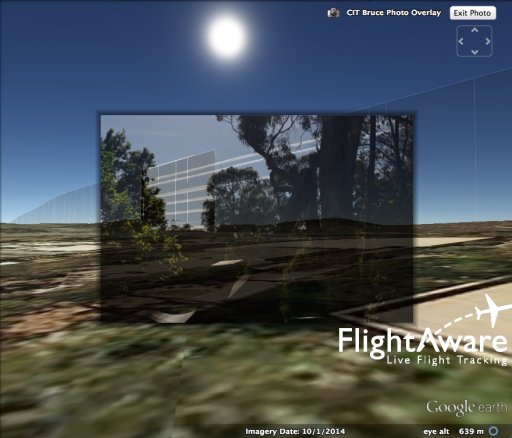 The contrails of the seven earlier flights from Sydney to Melbourne have also been allocated. 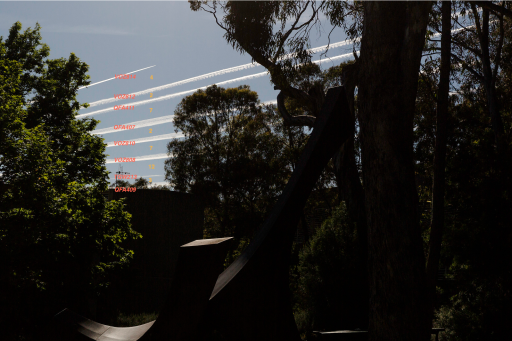 All these flights (red numbers) followed the same course of 235° and all but one did it at the same altitude of 38,000 ft. The time intervals between the flights (in minutes) were taken from FlightAware data and displayed between the corresponding contrails (orange numbers). Selected data are in the table below:

The contrails in this photo make the same 'barcode' as in the first and third OP photos, suggesting that all three photos were taken at about the same time. There are two points that should be noted:
1) In spite of the short two-minute interval between QFA407 and VOZ810, their contrails are quite apart. This is because QFA407 was flying closer to Canberra than the other planes.
2) TGW213, the only plane in the group that was flying lower at 36,000 ft, has left a thinner, broken contrail (OP photo #1).

PS OP has been updated with this information.
Last edited: Nov 26, 2014

Staff member
That's excellent work, with the "barcode" spacing. I would think that the spacing would remain very consistent for all trails at the same altitude. Eventually there might be some distortion as earlier trails sink.
You must log in or register to reply here.