Movement of Column 79 as Expressed in WTC7 UAF Presentation

Banned
In the presentation which can be seen here
the movement of the floor system is accounted for around column 79, specifically at around 55 minutes in.

[moderator add video quote as per No Click Policy/Deirdre:]


55:24 "we have a movement of that section right there. of almost 2 inches. but not west. it went east. totally different.
The floor moved east at column 79. not west.
55:39 and by the way, they moved together. They didnt move seperately. 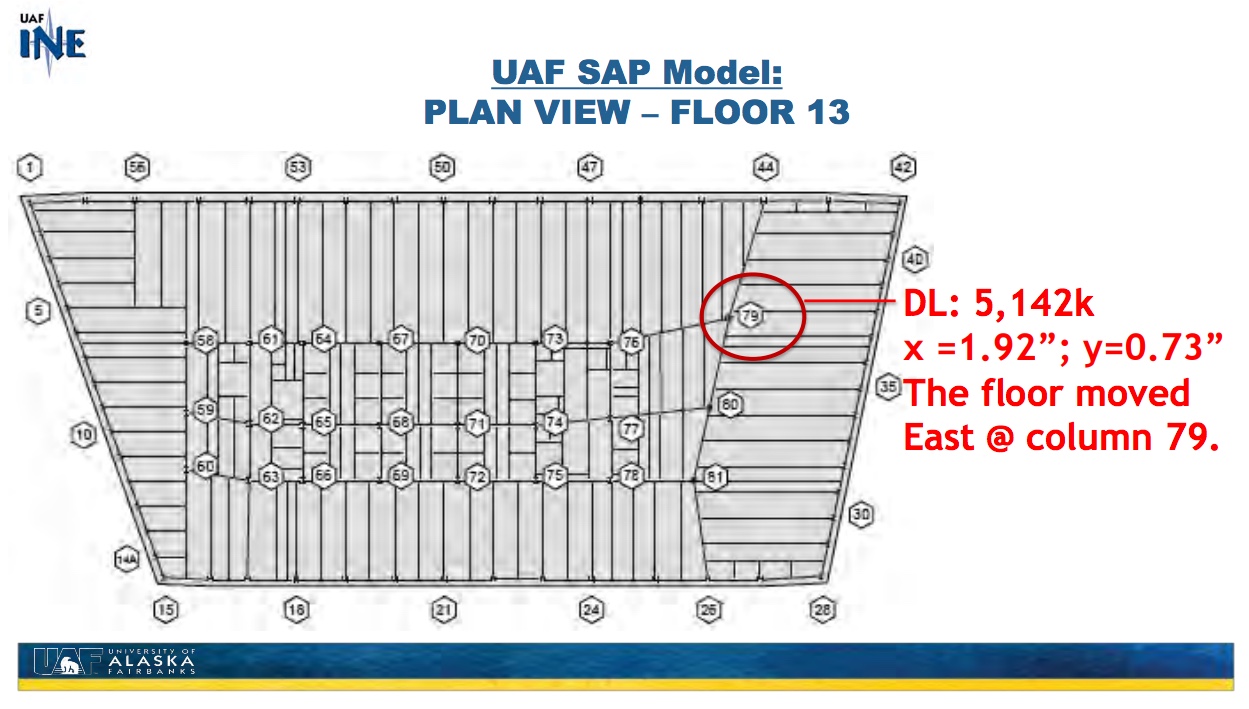 As can be seen, the movement to the East is expressed as a positive value in the x axis of 1.92"
You can also see to the right of that figure that the y axis value is also positive and is 0.73"

So when Dr Hulsey stated that the Column and the whole thing moved 2" East, he was correct
(less the 0.08") BU and he was stating it relative to their original position.
Last edited by a moderator: Sep 19, 2017

Banned
The Y axis figure. You hadn't noticed it. Let's have the convo here in the context of the thread that you banned me from. Why not make it just us that can post ?
ADD - it would save me from having to make 200 posts like the last one and it will be easier to follow. Nice and clear.

Staff member
What about the Y-axis figure (0.73)? That just means "the floor" moved north 0.73" relative to something.

Sorry Gerry, but your OP is a bit of a ramble. Perhaps you could add a diagram with some labeled frame of reference, points and vectors to clarify?

Banned
I never saw you mention the y axis until now. Anywhere. Maybe I missed it, genuinely.
So we agree that the movements are being expressed RELATIVE to their original position now, and that's a start.

So you said that the floor moved North "RELATIVE to something". What might that be ? Is it perhaps the CoS ?
I think it is relative to it's position at column 79. Do we still agree ?

Staff member
I have no idea what your point is.

Staff member
And frankly you seem very confused yourself. Draw a diagram.

No more posts from you without a diagram with vectors.

Hulsey, showing that slide 69 that the OP references, say:

This is WRONG.
NIST did NOT fix the exterior wall.
[DELETED REST OF MY POST]
[THEN ADDED:]

Shucks - I should have gone on listening to a very confused Hulsey:

So what I had written earlier does not apply here, and I deleted my following post accordingly.

Oystein said:
Hulsey, showing that slide 69 that the OP references, say:
Content from external source 54:42 We took and fixed the exterior column of wall line here
54:47 as did SAP - I mean as did NIST

This is WRONG.
NIST did NOT fix the exterior wall.

And I think this should end the discussion - Hulsey did something that is patently nonsense.
Click to expand...

I not sure how this is relevant to Gerry's OP, but then I'm not sure what point he's trying to make there either.

This thread is heading to Rambles unless Gerry can come up with a better explanation.

Mick West said:
I not sure how this is relevant to Gerry's OP
Click to expand...

I don't think it is, but I saw "y-axis" in Oysteins post so didn't delete it as off topic.

My guess is Gerry is trying to get to some point about the CoS. I'm not sure Gerry realizes everyone agrees that in Hulseys model the column (and floor) moved 2 inches east from .. well from every other point to the west.

I like detective stories, but this 'clue' type posting is getting tiresome. I wish people would just come out and say what they mean instead of dropping a bunch of cryptic posts figuring there will be some "big reveal" at the end.

deirdre said:
I don't think it is, but I saw "y-axis" in Oysteins post so didn't delete it as off topic. ...
Click to expand...

I edited my first post, and deleted the second, as I just found out that Hulsey was confused in his presentation about what model he was talking about. His correction, which I added to my first post, made my comment inapplicable.

Banned
Well Mick, looks like one of us knew all about relative motion at the appropriate level, and it was me.
The above thread stands well with me and I hope you remember who just sepnt the time schooling you on how FEAs work.
Don't suppose this comment will ever see the light of day, but you will always know that you didn't have the humility to unban me even though i had to teach you about FEA in order for you to see how correct I was, and how wrong you were. Sad. But true.

Oh and I kept the private convo in which you were SCHOOLED - from 2 sources. with times in background real time with your answers coming in.

Approved above post #12, just to document the strangeness of comments moderators have been dealing with the last few days and to show why I have given Gerrycan a 2 day ban... namely excessive off topic posts, excessive misrepresenting of other members, impoliteness, more interest in 'fighting' than in constructive output etc.

gerrycan said:
Oh and I kept the private convo in which you were SCHOOLED - from 2 sources. with times in background real time with your answers coming in.
Click to expand...

This essentially boiled down to what was the frame of reference for the (1.92,0.73) movement. i.e. a clarification of:

So when Dr Hulsey stated that the Column and the whole thing moved 2" East, he was correct
(less the 0.08") BU and he was stating it relative to their original position.
Click to expand...

This seemed to imply it was an absolute movement, but then it was not quite clear. So discussion ensued - in which there seemed to be some confusion about what frames of reference actually were. My last substantive point was:


Now i understand the notion you present of having a variable frame of reference centered on this calculated CoS [Center of Stiffness], this varies every frame. I can understand that idea, but I can't really see any reason to do that.

So this is a bit confusing. Is the movement relative to their original position in global coordinates (A), or in the floating (and as yet unspecified) CoS frame of reference (B).

My suspicion here is that Hulsey is not using any particular frame of reference. But because of the way the building expands, there's a region of zero motion (a thermal centroid). Nothing it relative to that, it just doesn't move.​
This does not seems like a particularly complicated point. Fixed or floating frame of reference?
You must log in or register to reply here.

How Hot Could The WTC7 Fires Burned, and How Hot could the Steel be?