About Good Gopher
GoodGopher was developed by Mike Adams, the Health Ranger, editor of NaturalNews.com. Adams was formerly the CEO of a very successful software company. He's now using his technical expertise to create GoodGopher which will benefit all "alternative" websites publishing TRUTH rather than propaganda.
.....
Good Gopher's Pledge of Integrity
GoodGopher is the world's first privacy-protected search engine that filters our corporate propaganda and government disinformation.
http://www.goodgopher.com/About.asp

(edited 5/31/15, added a more correct quote)
Their claim (found in the video) that Google .... 'penalizes or bans independent websites' needs to be proved, or at least proved to me.
I'm not saying it couldn't or doesn't happen, but I can certainly find any 'alternative' health or "independent truth" idea or website I could imagine. I could find perhaps, "vegan neo-nazi" , a phrase I just imagined while typing this, and it's there.
I could also find hard criticism about Google the company....on a Google search.
If Google can't or won't stop these type search results about themselves, why would they bother censoring anything Mike Adams thinks his followers are interested in ?

This is another attempt to help people isolate their ideas and their search results. It's another way of 'searching for things they already believe in', and confirming their bias.
The hypocrisy can be stunning....where in order to avoid the accused 'mass media' selective censorship, their answer seems to be outright selective censorship.

They're currently accepting site suggestions ahead of their unveiling. I would love to see the accumulating list.

sorry, couldn't help myself, put this in as a suggested site
http://www.dhmo.org/

Welcome to the web site for the Dihydrogen Monoxide Research Division (DMRD), currently located in Newark, Delaware. The controversy surrounding dihydrogen monoxide has never been more widely debated, and the goal of this site is to provide an unbiased data clearinghouse and a forum for public discussion.

I had already put my snarky 2 cents in, but I decided to toss in another bid for your classic dhmo suggestion. Here's what popped up:

Not sure what to make of that. Guess I'll check back in a few weeks.

There's a bug.
Already.
....someone else mentioned it at NN.

Leifer said:
Their claim that Google searches edit or withhold query results....needs to be proved
Click to expand...

you forgot to put the claim in your post

With your help, we are building the internet's largest search engine for those searching for information and news on liberty, natural healing, central banks, food freedom, advanced science and a multitude of other topics no longer allowed in NSA-controlled search engines.

whats sad is i searched "geoengineering" on a clean browser and got this... so much for Googles "quality content algorithms" 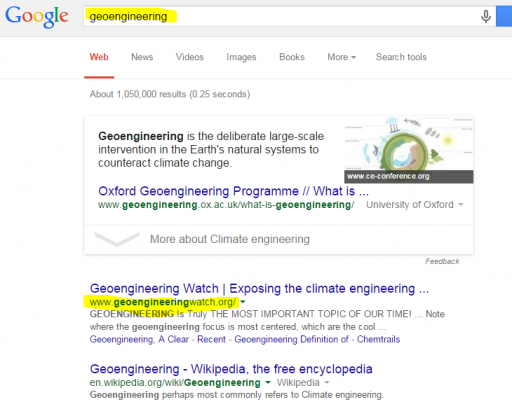 and this scares me a bit:
http://searchenginewatch.com/sew/ho...turned-up-social-signals-as-a-ranking-factor#

this is just kinda cool:
http://blog.hubspot.com/marketing/google-algorithm-visual-history-infographic

How about National Report?
So I guess this logically means there has to be some kind of blacklist of websites they *don't* want people to see; it'll be interesting to see that list.

Pete Tar said:
How about National Report?
So I guess this logically means there has to be some kind of blacklist of websites they *don't* want people to see; it'll be interesting to see that list.
Click to expand...

Although there are plans for quality to mean more as well "factual " or "closer to consensus view", right now with quality Google means generally stuff like "original research, citations, links, reviews and testimonials" and "not mass-produced or outsourced on a large number of other sites". -- source at Google

Natural News has gone from giving out pickaxes for deepening the rabbit hole to full blown open pit mining. Gopher is a good name for it..

Looks like it's up. Having a hard time using it to find basic information.

• vaccine articles and information on the naturalnews network,...
http://www.naturalnews.com/list_features_vaccine.html

Its safe to say that GoodGopher is every conspiranoid's wettest dream, and potentially one of the most intellectually damaging tools found on the net.

Sausalito said:
Having a hard time using it to find basic information.
Click to expand...

I don't think it is designed to help people find actual useful information.

Nope, it is DEFINITELY designed to keep people in an echo chamber

People peddling conspiracy theories seem upset that Google is not linking to their conspiracy websites as much as they had been. 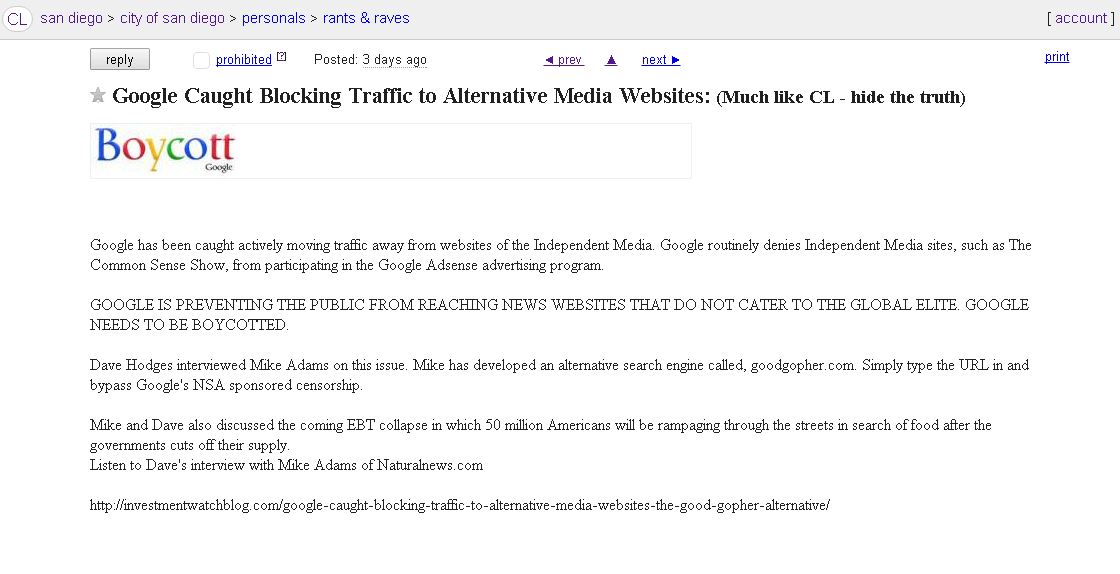 I wonder, it's just Google who are ranking their content based on accuracy? Why not just use Bing, or Yahoo Search? However, the official NaturalNews still comes first on all search engines I have tried. Not much of censorship is it...

But aside from DMCA takedowns, none of them completely omit results, and no matter how far down they rank them, there's a relevance floor that keeps them from falling too far. So conspiracy heavy searches on Google will still be heavily dominated by conspiracy results, even if you (sometimes, the process is hardly good) get a debunk or semi-neutral wikipedia entry first.

Staff member
In a nicely ironic turn of events, Mike Adams's main site, naturalnews.com has now been blacklisted by Google.

Adams is less keen when the boot is on the other foot.

Of course, Adams made the point that Good Gopher would use human decisions to blacklist sites, rather than rely on algorithms. From http://www.goodgopher.com/About.asp:


When enough users flag a link as "Bad Gopher!" we review the URL and parent domain to determine whether it should be banned from our index. "Bad Gopher!" clicks do not affect rankings, so trolls have no reason to arbitrarily click links for sites they don't like.

Hearsay of course but,


John Mueller, a Webmaster Trends Analysts at Google, has now posted on Twitter saying Google did post a message about the penalty in Google Search Console. He also added a thread that the site was penalized due to sneaky mobile redirects. John said:

Hi! I work with the Google Search team. We’re seeing a bit of confusion & incorrect stories circulating about what’s happening here, so just to be super clear — Natural News is using a sneaky mobile redirect, which is prohibited by our webmaster guidelines (there’s a bit about this kind of issue at https://webmasters.googleblog.com/2015/10/detect-and-get-rid-of-unwanted-sneaky.html ).