Facts: A big issue with using media reports is the quality of media you're using to get your information; some media are more prone to spread misinformation than others. Happily, there are people tracking this.

Bias: Apart from the factual accuracy, there is also media bias that shapes the perspective how information is presented, and which information is selected for presentation.

If you want to get out of a rabbit hole (or get someone else out of one), opening up the daily news consumption to more factual and less biased media is a good idea.

This is a big overview chart. You need a license to download and publish it, but you can simply link to their site https://www.adfontesmedia.com/ or use the copies they shared on social media. (Note: they have two icons each for MSNBC and CNN to distinguish their TV programming from their web sites.)
Source: https://twitter.com/vlotero/status/1337477043504570371

Source: https://twitter.com/Kesbug/status/1132774481959591936
I noticed the outrage & anger w/I my own family & have used the #mediabiaschart to get them to move OUT of the red / orange zones & UP the chart; their views were still represented ~ it has helped

Another site that lets you search for a specific news outlet (use the search box in the upper right corner) is https://mediabiasfactcheck.com/ . They report on both bias and factual accuracy of a source; I like that.

Where our report says "PRO-SCIENCE", most other sites have a bias slider that positions them on a spectrum of left to right.

These sources consist of legitimate science or are evidence based through the use of credible scientific sourcing. Legitimate science follows the scientific method, is unbiased and does not use emotional words. These sources also respect the consensus of experts in the given scientific field and strive to publish peer reviewed science. Some sources in this category may have a slight political bias, but adhere to scientific principles. See all Pro-Science sources.

Factual Reporting: HIGH
Country: USA
World Press Freedom Rank: USA 45/180
History
Founded in 2010 by Mick West, Metabunk is primarily a forum that debunks pseudoscientific claims such as chemtrails, UFOs, and conspiracy theories. Mick West is is a science writer, skeptical investigator, and retired video game programmer. He also runs the site contrailscience.com. According to their about page “Metabunk.org is dedicated to the art and pastime of honest, polite, scientific investigating and debunking. It is primarily a discussion forum, however, the focus is on providing concise useful resources, and attempting to avoid repetitive debate and arguments.”

Funded by / Ownership
Metabunk is owned by Mick West. He reports on his about page “I do this purely out of personal interest, and nobody pays me in any way.” Revenue appears to be derived through advertising.
Analysis / Bias

In review, Metabunk consists of people who post forum questions that are answered by other members and Mick West. For example, a thread was created to investigate a potential UFO, Black UFO At Skinwalker Ranch (A Fly). Users prove it is actually a black fly that crossed in front of the lense. They also debunk ridiculous conspiracies such as Coronavirus being spread by 5G Debunking Correlations Between 5G deployments and Coronavirus. In general, this is a pro-science source that debunks pseudoscience and conspiracy theories through evidence.

Allsides.com has a bias chart, and a database of over 800+ news outlets (scroll down on https://www.allsides.com/media-bias/media-bias-ratings to find the search box), but it doesn't rate sites on factual accuracy. AllSides Media Bias Ratings™ by AllSides.com are licensed under a Creative Commons Attribution-NonCommercial 4.0 International License. These ratings may be used for research or noncommercial purposes with attribution. 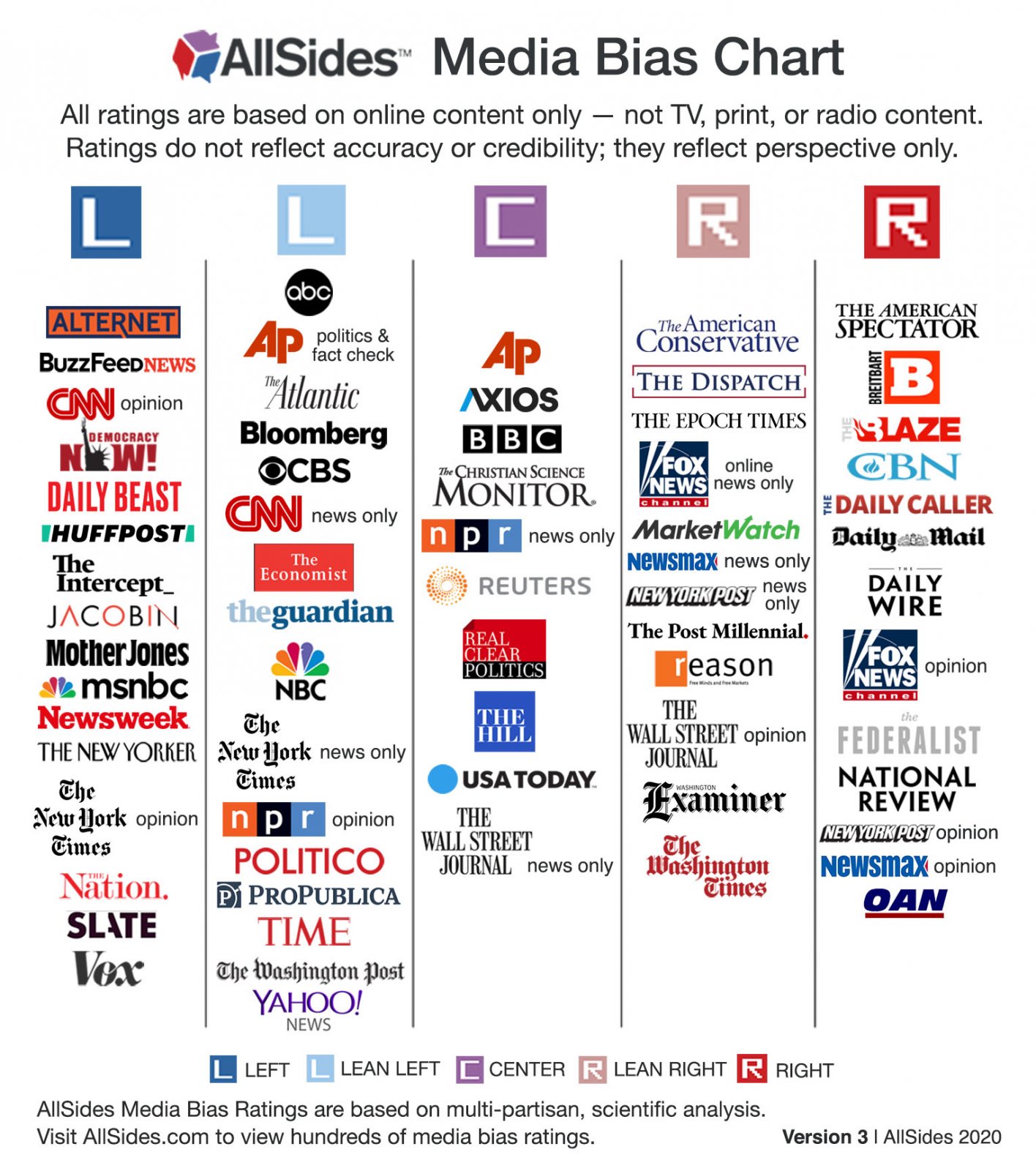 How reliable are these databases?​

These databases are good when you want to get a quick picture of what to expect from an outlet. But it doesn't say anything about a specific individual article from that outlet: it could still be biased or have errors in it. I'm using them more as a tool for setting my expectations when dealing with a specific source, but I remain alert to signs of errors and bias in the specific item of news I'm using as evidence.

The Poynter Institute took a look at the charts I mentioned above:

But perceiving the chart as distilled truth could give consumers an undue trust in outlets, McBride said.
“Overreliance on a chart like this is going to probably give some consumers a false level of faith,” she said. “I can think of a massive journalistic failure for just about every organization on this chart. And they didn’t all come clean about it.”
[..]
The charts are only as good as their methodologies. Both McBride and Groeling shared praise for the stated methods for rating bias of AllSides and Ad Fontes, which can be found on their websites. Neither Ad Fontes nor AllSides explicitly rates editorial standards.
[..]


Should you use the charts?​

But use them with caution. Political bias isn’t the only thing news consumers should look out for. Reliability is critical, too, and the accuracy and editorial standards of organizations play an important role in sharing informative, useful news.

The Poynter Institute runs politifact.com. They also offer online training to enable users to do fact-checking for themselves with their MediaWise program at https://www.poynter.org/mediawise/ .

They advocate for 3 simple questions to ask yourself before sharing informrtion:
Source: https://www.youtube.com/watch?v=XY6_p3w8oi4

Cruising along the internet super-highway, there's a lot to take in: social media pit-stops, roadside attractions like viral TikToks and lane upon lane of useful information. But weaving between apps, it's easy to lose your way or hit a roadblock like misinformation. But avoiding misleading claims isn't that tough: just ask yourself these three questions developed by the Stanford History Education Group.

1: Who is behind the information? Take a quick detour to read their bio. Are they an expert?
2: What is the evidence? Did they include a link to a credible source?
3: What are other sources saying? Like switching lanes, open up tabs and search using keywords for full context.

Even for digital natives, the road to accurate information can be a bumpy one, so these questions are especially important for first-time voters. Big decisions shouldn't be influenced by bogus info, so navigate with caution! Thinking twice before sharing can help us all get where we want to go.

During an election season, facts can get distorted, and sorting through what's true and false on your timeline can feel like a house of
mirrors. But before you let a post impact your vote, try fact checking it using something Stanford History Education Group calls "lateral reading".

Here's how it works: get off the page you're on, and open up tabs to verify the information, aka jump through that looking glass and dive down an internet rabbit hole! Professional fact checkers do it all the time:
* look into who shared this and why,
* search keywords from the post,
* check what other sources that you trust are reporting.

Even just 30 seconds researching can add clarity and ensure your vote is based on facts, not fiction.