This post refers to a drill carried out in Manchester in 2016. It is unrelated to the May 2017 suicide bombing in the Manchester Arena.

An estimated 800 people made up of volunteers, fire and ambulance service personnel and the North West Counter Terrorism Unit are taking part in the role-play. Police said they wanted to make the exercise as realistic as possible.

The three-day drill, which began at midnight at Trafford Centre shopping complex on the outskirts of Manchester, involves officers armed with machine guns responding to a series of different scenarios, including ones in which there are mass civilian casualties, hostage-taking and suicide bombers.

The force wants to see how the emergency services respond to developing or ‘fluid’ situations. 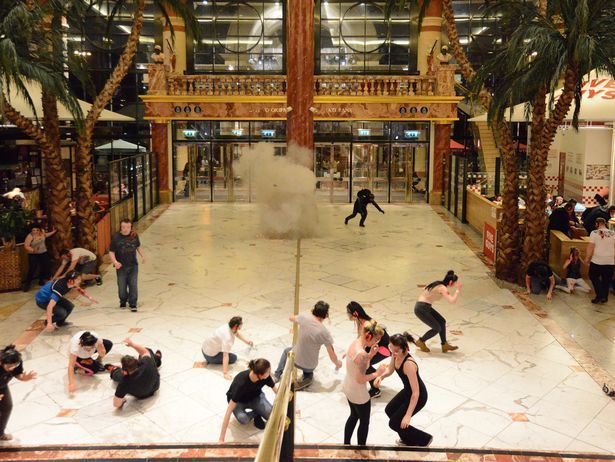 Needless to say the conspirasphere is seeing this as a practice run for another 'false flag' operation in the near future. eg...

That is to be expected, but there is no excuse for this...
http://www.dailystar.co.uk/news/lat...ese-chilling-theories-warn-of-IMMINENT-attack


British special forces dealt with a mock terror attack – involving a fake suicide bomber – at the Trafford Centre near Manchester on Monday evening.

The drill was meant to prepare the security services for a real attack and reassure the public they are ready for the worst.

But a staggering number of similar drills in the past have been almost immediately followed by real terrorist attacks.

Training drills took place shortly before the 7/7 bombings in London, the 9/11 attack on New York and the Iranian Embassy seige in London in 1980.

Speaking hours after the atrocity, managing director Peter Power said: "At half past nine this morning we were actually running an exercise for a company of over a thousand people in London based on simultaneous bombs going off precisely at the railway stations where it happened this morning – so I still have the hairs on the back of my neck standing up right now."

Now many of us in the UK know The Daily Star is the very lowest of the tabloid gutter press, but this a new low in journalistic standards even for them. By reporting this story in this way not only are they in danger of spreading panic across the UK, but they are baking up a pile of bunk pies fresh to feed into conspiracy machine.

The fact is drills happen all the time, for disasters, unrest, pandemics, terrorist actions and every other conceivable incident. Over the past few months in the UK we have had major drills at Canary Wharf in London and at a Sheffield shopping centre, plus a drill for a crash on the London Tube system. In fact if you looked at the emergency services, security forces and local government planning world wide I would be suprised if a day went past where there wasn't a drill or training excersise going on.

Everyone who could be involved in an incident, terrorist or otherwise, from the SWAT teams right down to the Salvation Army mobile canteen and shelter staff needs to know what to do. And the only way to know what to do is to train for it. Be it a small scale paper and pen exercise or a full blown drill like the one on going in Manchester.

These drills are NOT harbingers of real incidents despite what the conspiracy crowd and the Daily Star may say.
Last edited by a moderator: May 24, 2017

"Police who staged a mock attack featuring a bomber shouting "Allahu Akbar" have been forced to apologise for racial stereotyping.

The exercise - criticised for using a fake "Muslim terrorist" - was to test the response of emergency services".

these types of stories always conflict me, on the one hand yes "Allahu Akbar" was insensitive

on the other, it seems to pander to the serial complainers and whingers who continually make such a big deal of it and tends to cloud re issues of institutional racism
You must log in or register to reply here.