Looking for debunkings of the “Plandemic” video

I’ve been seeing a lot about this video the last few days, and am looking for thoughts on it from people who might actually know a thing or two about virology and medicine.

I’m not really wanting to post a link to it, but you’ve probably seen it, or seen talk of it.

Staff member
Maybe you could be a bit more specific? There are literally hundreds of people posting critiques of that video. When you Googled Plandemic+Debunked, you get a lot of results. What's lacking?
https://www.google.com/search?q=Plandemic+debunked

This reddit debunk seems quite detailed and thorough. It ends:

In conclusion, this woman has a serious axe to grind with her peers and even her former collaborating colleagues. Her published research has been completely discredited by a dozen independent studies. This is why we have peer review of scientific claims - in order to discern real fact. Dr. Mikovits was to a receive $1.5M grant from NIAID herself, which she has now lost due to lack of scientific fact and lack of ethics. Sometimes I see a meme on Facebook that says something about how some people believe that scientists are conspiring to lie to them… like, why would scientists lie? They “lie” or more accurately, falsify data because believe it or not, science is even more competitive than the music industry and scientists can’t sell tickets to their show. In order to receive any money for doing science, one needs an expensive education and to be able to publish credible findings.

Dr. Mikovits cannot even be honest or discerning in relaying the truth about her legal issues, so I do not know why anyone would take any testimony by this person about anything with anything other than a large grain of salt and that is the nicest way I can say it.

I did find the Reddit rebuttals, and have used them, and been derided for it. I’ve found them to be very useful, though.

as for literally hundreds posting critiques, when I went looking, I did not find them. Maybe I was too early? Will follow your link, Mick. Thanks!
U

Thanks so much for the google search link, Mick. I had been looking for info before most of those articles were published, according to the time stamps. So this is great.
J

While I can't speak for what may or may not have been cooked up in the cabals of the wealthy a hundred+ years ago (or today either), it really wasn't until the end of the 19th century/beginning of the 20th that the germ theory of disease was finally accepted. Heck, it wan't until the US Civil War period that Pasteur finally was able to start convincing everyone that there was no such thing as spontaneous generation! (Maggots spontaneously growing from spoiled meat was a common belief.) I remember as a kid in school doing that experiment in my science class, although we used a nutrient agar rather than spoiled meat.

Things were still on the tail end of the old "miasma" ideas. While Rockefeller and his ilk were extraordinarily wealthy, titans of industry, and with their hands firmly in the mechanisms of government and society, there wasn't really much understanding of viruses. Vaccination had only just begun at the end of the 1700s, with Jenner's now-unconventional method of figuring out that vaccination against deadly smallpox could be done by exposure with cowpox, a related disease. But no one could demonstrate the mechanisms.

I can only imagine that there were those in society who believed that the golden age of medicine was on them. However, it really wasn't until starting to learn about genetics and DNA that science could actually start to understand the mechanisms. Nonetheless, lots of really seminal work was done in the early 1900s. But, like I said in another post, there was always a tremendous amount of pseudoscience and quackery (drinking bleach and other toxins for simple-minded and wrong reasons, homeopathy, reiki, and the hits just keep a'comin) that to this day continues although we should know better.

Here is a blog write-up and debunk of Plandemic.
It's not as "polite" as we prefer here, but it is backed-up by plenty of links.

.......We now get to Judy Mikovits, who is portrayed in the clip above as just the sort of brave maverick scientist and truth teller that every good conspiracy theory needs, a woman with hidden knowledge who’s fighting dark powerful forces seeking to “silence her.” The sad thing is, at one time she was a decent scientist, unlike some other legitimate scientists turned antivaccine cranks, like Christopher Shaw, Christopher Exley, Jeffrey Lyons-Weiler, and Andrew Wakefield, who were almost certainly never very good scientists even before they turned into cranks.
Click to expand...

Leifer said:
Here is a blog write-up and debunk of Plandemic.
It's not as "polite" as we prefer here, but it is backed-up by plenty of links.

Thanks for that link. Well written and articulate. Don't think it was impolite at all. 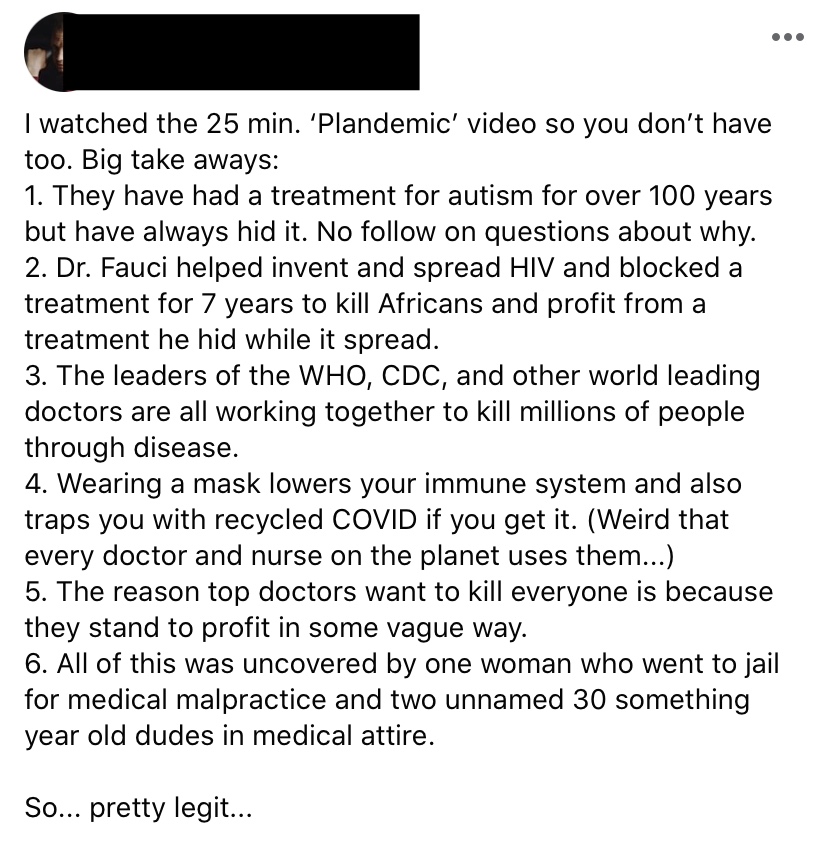 She didn't go to jail for medical malpractice.

she also does not say Fauchi helped invent HIV.

8:15 Judy: [AIDS] that virus was spread through because of the arrogance of a group of people, and it includes Robert Redfield, who is now the head of the CDC. Right along with Tony Fauchi, they were working together to take credit and make money. and they have the patents on it. and tailored them to IL-2 therapy which was absolutely the wrong therapy. and had that not happened millions would not have died from HIV.
...
9:03 "repeal the Bayh Dole Act'"

article from 2005-
Fauci, an internationally known expert on illnesses from the flu to AIDS, said he originally refused to take the royalties but was told he legally had to accept them. So he has donated all the money to charity.

“I’m going to give every penny of it to charity ... no matter what the yearly amount is,” he said.
Fauci also said he once tried to report his payments on his federal financial disclosure report, which is available to the public, but was told to remove them because NIH considers the money federal compensation, not outside income.

she did say she invented ebola (sort of)

While we could not verify Mikovits' claims to have worked at the lab nor the nature of the work she might have done there, her statements simply don't pass the sniff test. If in 1999 her research was aimed at getting Ebola to infect humans, she was behind the curve — by decades. The first Ebola outbreak occurred in 1976 in central Africa, killing 280 people. Between 1976 and 1999, there were several more such outbreaks that killed hundreds of people.
Clearly, Ebola was able to infect humans long before 1999.