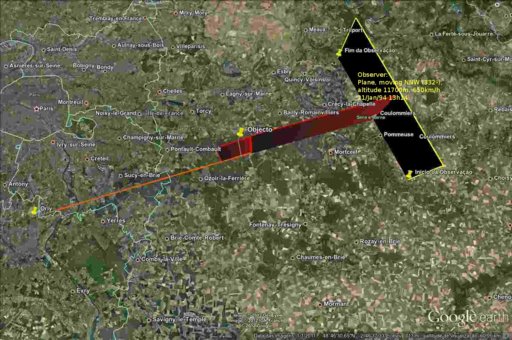 The event detailed in this link was not physically explained and is used as evidence on UFOs existence.


I suspect that the perceived visual effect and the radar signal were originated by a contrail.


They saw a dark object of varying geometry during 1 to 2 minutes in the direction of Paris, started at 10 oclock and ended at 8 oclock and somewhat drifting in the sky along the path parallel to the plane.


It was seen at half distance to Orly airport which has a runway at 80º exactly inline with the vision (unnoticed fact). The reported altitude of the object was 10500m


---
Notes:
a contrail seen against a landscape can not be seen when we look perpendicular to it and is much more perceivable when seen along the longitudinal axis. So, in the start of the vision it appears to be far distant to the left and as the plane closes more and more the angle with the contrail longitudinal axis it will appear nearer.
I dont know if a comercial or militar plane had just landed at Orly Airport (ORY) leaving a contrail, but their vision seems to be consistent with a contrail.

Please, feel free to move the post to a more correct sub-forum.
---
I'm asking the oppinion of the readers.
---

Staff member
It's possible that people a contrail, or a cloud. Unfortunately it's hard to picture it from the descriptions given, with the French translation.

However - contrails do not show up on radar. Also planes landing and taking off do not leave contrails until they are above aroun 28,000 feet (9,000 m).

Contrails that are a long way off, and viewed end on, can look like a more compact object. See:
https://www.metabunk.org/posts/22495

Unfortunately this case is going to be very hard to address without images.
Last edited: Nov 20, 2013
You must log in or register to reply here.