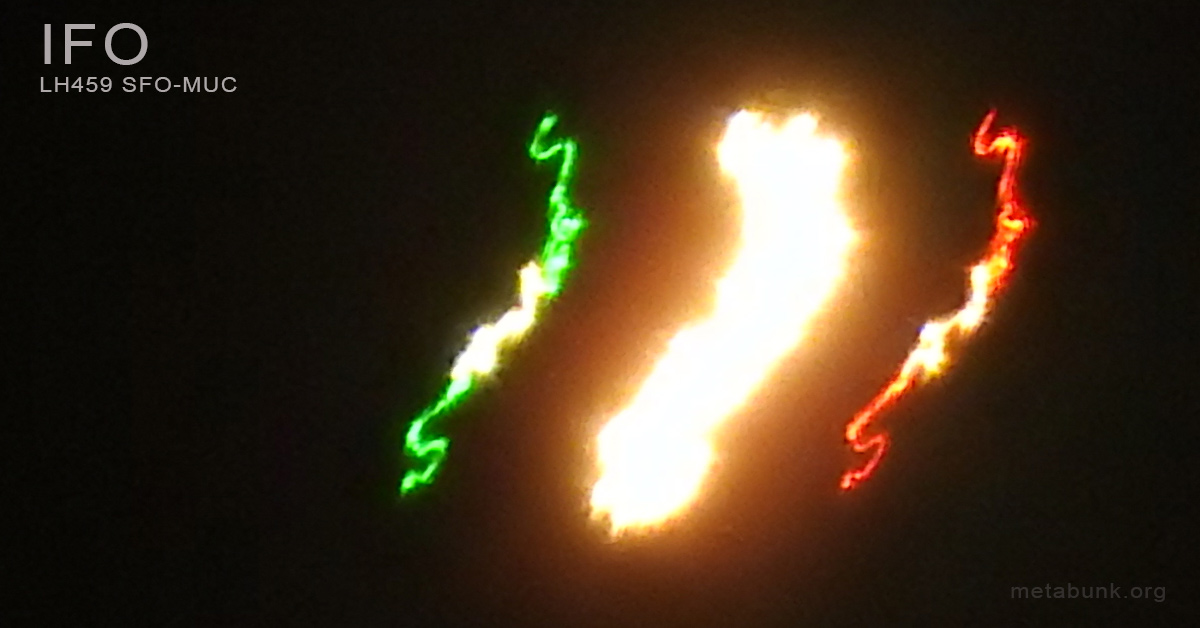 When I first saw the light it did not seem to moving I had no idea what it was. Venus maybe? Then I saw it actually was moving, so I thought it might be the International Space Stations, which had made a couple of good passes over here in the last two days. I tried to take some photos, and got some blurs like the above. I switched to video and what I saw on the view screen was a strange set of three flowering lights. When I put it on the computer though, it looked like this:

It's a plane of course, and I realised that as it approached me and flew overhead. Lufthansa 459, from San Francisco to Munich. An A340, climbing through 20,000 feet. My first photo was just a pretty piece of motion blur from the camera moving. The "flowering lights" were just my old eyes being too close to the camera screen and hence out of focus.

Mystery solved. It struck me though just how many "UFO" sightings are based on single anomalous observations, when multiple observations would clear things up. For example, as I continued to film I did not see anything like this - which I saw only after I enhanced to the footage. 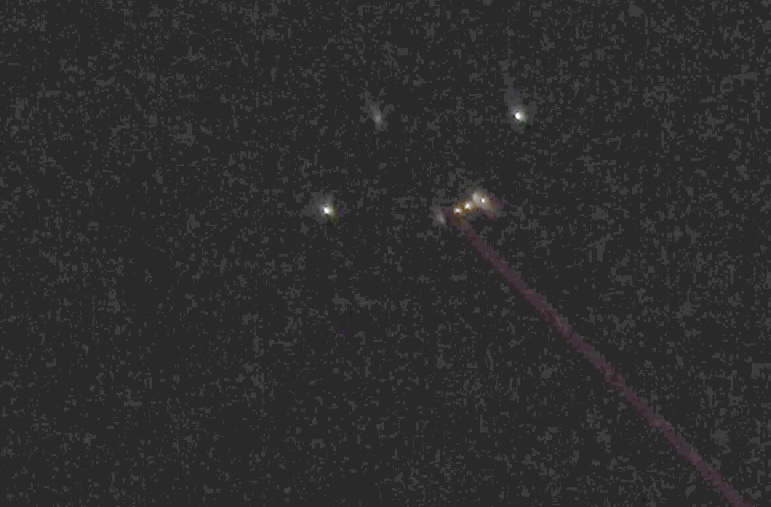 Looked like the plane was shooting a laser! And from different points too. 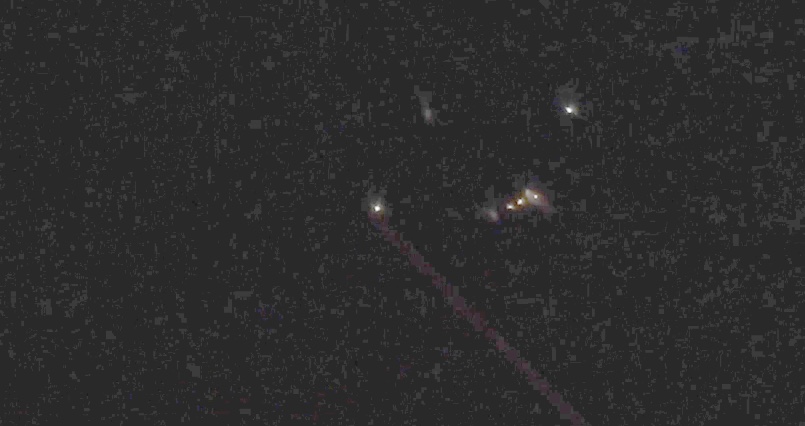 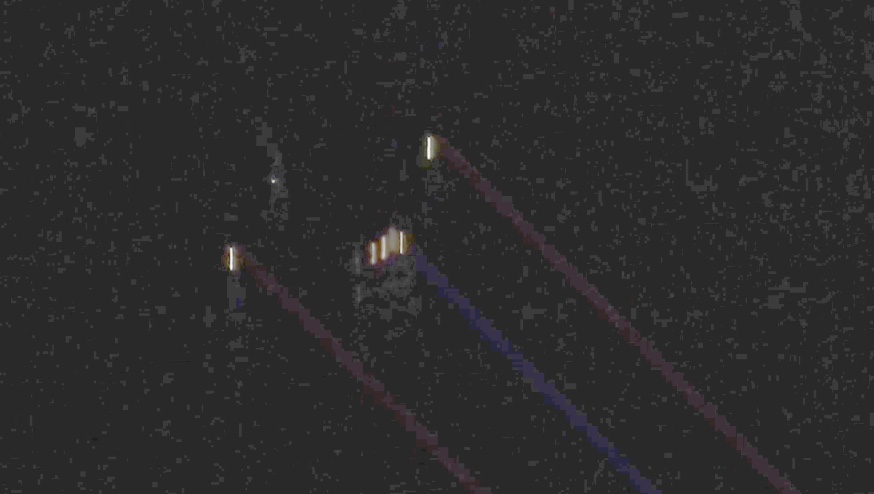 And at one point from the middle of nowhere. 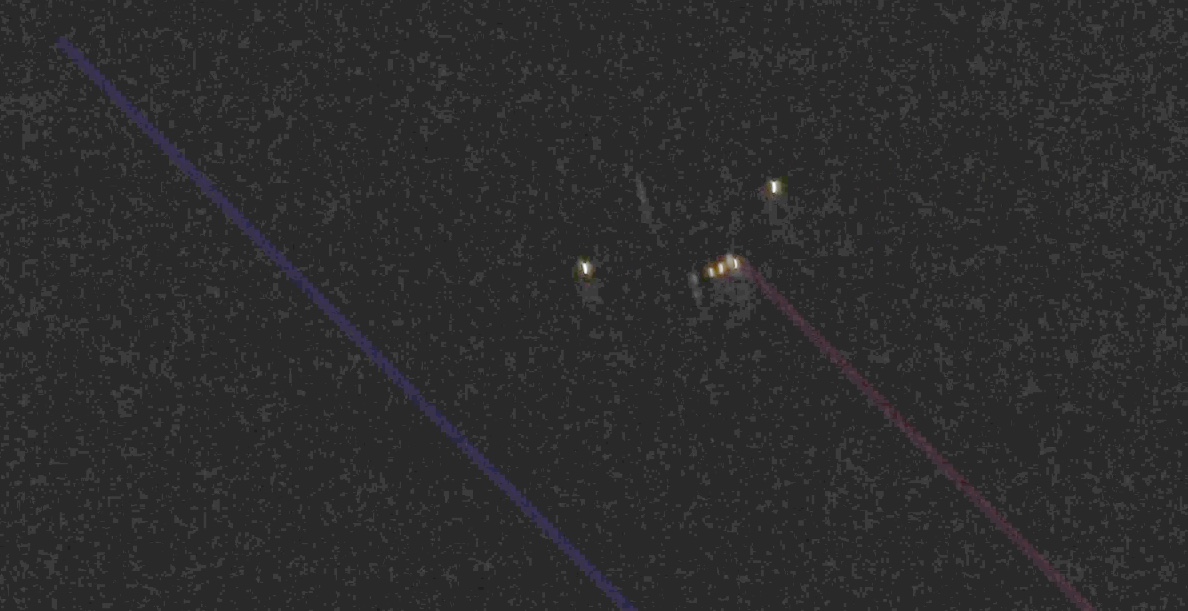 That one made it obvious that it's some kind of camera glitch. It looks like it's in line with the plane, but it's actually at a pixel-perfect 45°. But if you only had the one image to go by them you could maybe convince yourself the plane was shooting lasers.

The "enhanced" footage showed something else. I stabilized it so the planes was not moving, but of course the camera was still shaking all over, and I got:

The lights seemed to be leaving trails! Of course they were not, as the motion was all from the camera. But one could easily imagine someone taking a single frame of a single light with similar artifacts and then passing it off as a faint comet or rocket.

The lesson here is to take as many photos as possible, and to take both photos and video. Interpreting a light in the sky from a single image is very difficult - but given enough images you should be able to figure it out.
Last edited: Jul 26, 2017
You must log in or register to reply here.