I found a crowdfunding campaign seeking the funding for a project of a phone charger that is powered by the phone self. Better told it is an external case for a cell phone that is supposed to be "recycling wasted energy" from phone's cellular and WiFi radiation. It is supposed to extend the battery life by 30%.

The campaign received the "Kickstarter Staff Pick" label. I'd tell that it is rather revealing about the quality of the project checking at Kickstarter (that many claim is better than for example at Indiegogo).

At the moment of the writing, the campaign collected $76,709

EDIT: I am sorry, I did not notice that the campaign is actually from the last year. It did not meet the funding goal of $135K, so I hope the funds were not paid out. I am not sure whether they did not try, or are not trying to fund it elsewhere. I still think that it was worthy of starting the debunking thread, because "Free Energy" activists are still promoting it on Facebook and on their websites.

Some quotes from the campaign text:

Game-changing wireless power technology that gives your phone more battery life by recycling wasted energy. Made in the USA.

We have integrated our radio frequency harvesting technology into phone cases for the iPhone 6 and Galaxy S6, allowing you to significantly extend your phone’s battery life by recycling wasted RF waves.
...
University Technology Partnership 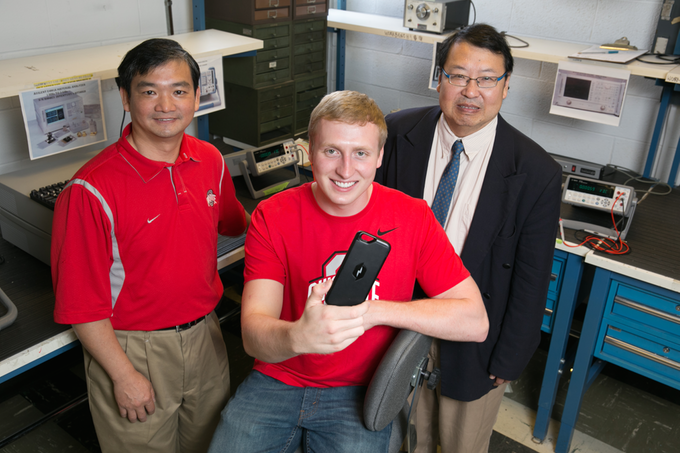 This is possible because the case captures wasted RF energy from the phone and recycles it back into the phone resulting in extra battery life, without disrupting call quality or data communication.
...
These results show a 30% reduction in discharging battery rate in the presence of RF energy harvester.

And the main video of the project (more available on YouTube):

So let's look at it a bit closer:

In the first place, it would save the battery life much more efficiently, if the phone reduced its emitting power, when the transmission quality is satisfactory. And not surprisingly, every modern cellphone does exactly that.

Now ignore this important logical glitch of their "invention", and let's look how much energy they could theoretically harvest in the best case.

I looked up emission levels of common cell phones, and they are typically below 1W at peak. The following post of Lawrence Finch (an electrical engineer specialized in RF design) summarizes it the best:

The capacity of an iPhone 6 battery is 6.9 Wh. Significant part of the energy is needed for the electronics, for the processing power, and for the display. The maximum talk time of an iPhone 6, according to the specifications is 14 hours. That's for ideal conditions, so even those 50mW would not be emitted in such case, but let's count with the double of it anyway - 100mW during 14 hours makes 1.4Wh. Now let's assume Nikola Labs can miraculously extract 50% of the radiated energy without disrupting the call quality, and recycling it back to the battery with 100% efficiency. It would mean it can recycle 0.7Wh. That's still only 10% of the battery capacity, not 30%.

Based on the calculation that failed to meet the promises despite the excessively optimistic and completely impossible conditions, we can quietly conclude that the harvester proposed by Nikola Labs can never (even remotely) work as advertised. It would be interesting hearing the official stand of the Ohio State University that is claimed to be in a partnership with Nikola Labs.
Last edited: May 27, 2016

I wonder about the quality of the education at the Ohio State University, if it keeps professors and engineers who believe that by external damping (and recycling) of the emitting power from a cell phone you can extend the battery life by 30%. If I had kids wanting to study electrical engineering on that university, I would discourage them from applying.

And Nikola Labs continues with the hoax, selling the device at thegadgetflow.com for $99:
http://thegadgetflow.com/portfolio/...-with-eco-friendly-wireless-power-technology/
What I do not quite understand is the last sentence of the product description:

... So get set to enjoy 5 volts of extra energy by downloading a file via Google Drive !

Perhaps besides buying the useless external case, you have to install an application that reduces the emitting power, saving so some energy, but there is no mention of it anywhere else in the text. The expression "5 volts of extra energy" is also quite revealing about the quality of the education of the author of the text.

They have also their own website at http://www.nikola.tech. On the "about" page they list a dozen of co-workers and partners.
Last edited: May 27, 2016

txt29 said:
And Nikola Labs continues with the hoax, selling the device at thegadgetflow.com for $99:
Click to expand...

except when you click "buy" it just leads to the website which doesnt say anything about 30% and i cant find a place to buy it anywhere.

Yes, that's correct. My bad that I did not test it. I think I'll try contacting them and ask them for comments.
You must log in or register to reply here.

Indiegogo - Bioo Powered by a Plant